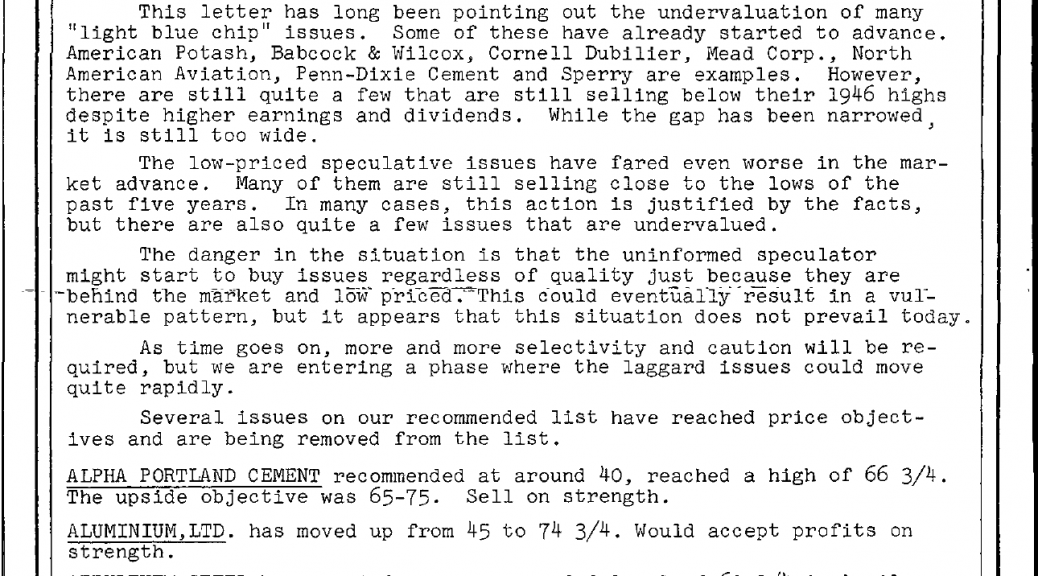 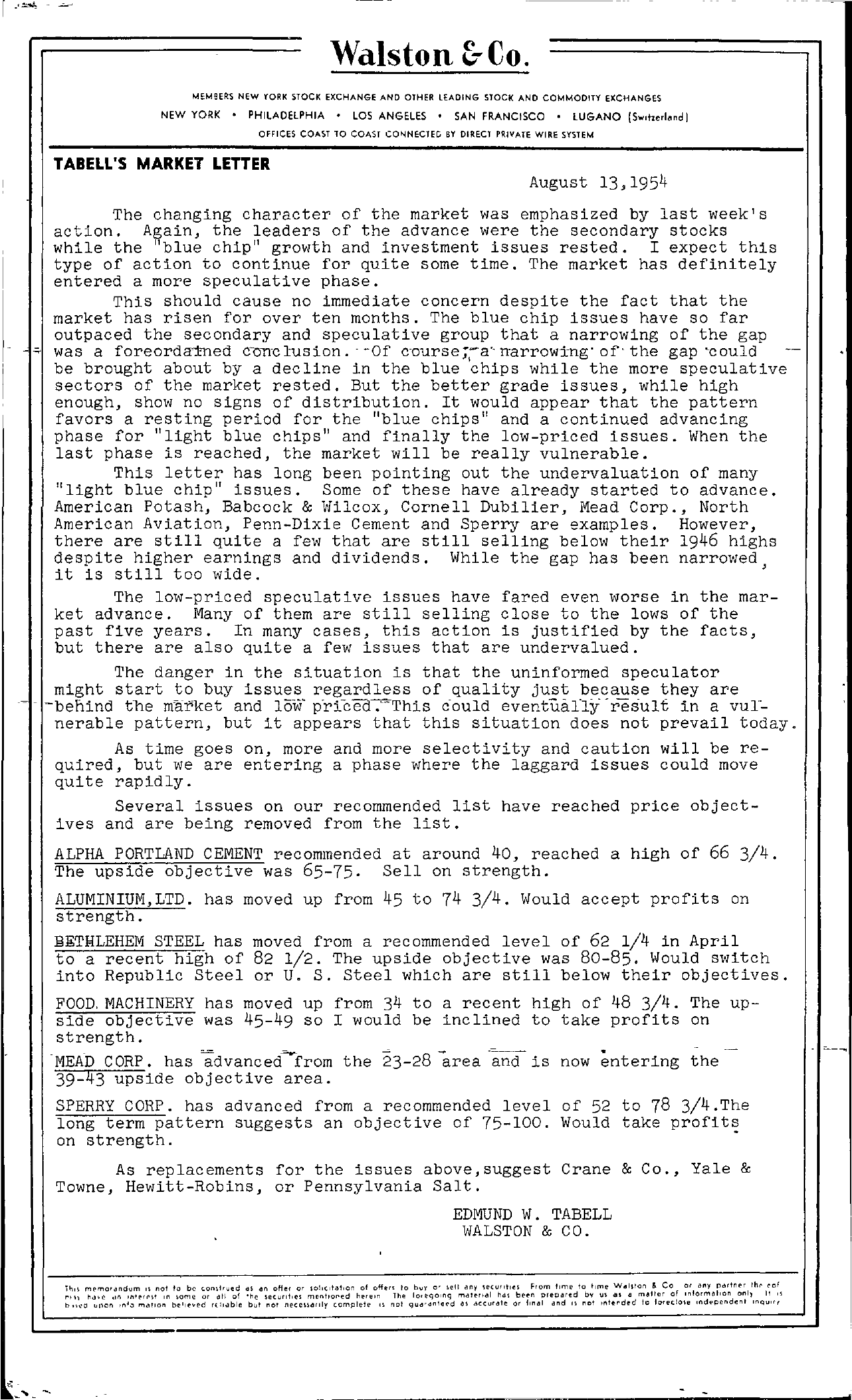 Walston &- Co. MEMBERS NEW YORK STOCK EXCHANGE AND OTHER LEADING STOCK AND COMMODITY EXCHANGES NEW YORK PHILADELPHIA LOS ANGELES SAN FRANCISCO LUGANO (Sw,tmldl OFFICES COAST TO COAST CONNECTEC BY DIRECT PRIVATE WIRE SYSTEM TABELL'S MARKET LETTER August 13,1954 The changing character of the market was emphasized by last week's action. Again, the leaders of the advance were the secondary stocks while the blue chip growth and investment issues rested. I expect this type of action to continue for quite some time. The market has definitely entered a more speculative phase. This should cause no immediate concern despite the fact that the market has risen for over ten months. The blue chip issues have so far outpaced the secondary and speculative group that a narrowing of the gap was a foreorda111ed c-on-clusion. – -Of c-ourse;,-a narrowing of the gap -cQuld — be brought about by a decline in the blue chips while the more speculative sectors of the market rested. But the better grade issues, while high enough, show no signs of distribution. It would appear that the pattern favors a resting period for the blue chips and a continued advancing phase for light blue chips and finally the low-priced issues. When the last phase is reached, the market will be really vulnerable. This letter has long been pointing out the undervaluation of many light blue chip issues. Some of these have already started to advance. American Potash, Babcock & Wilcox, Cornell Dubilier, Mead Corp., North American AViation, Penn-Dixie Cement and Sperry are examples. However, there are still quite a few that are still selling below their 1946 highs despite higher earnings and dividends. While the gap has been narrowed , it is still too wide. The low-priced speculative issues have fared even worse in the market advance. Many of them are still selling close to the lows of the past five years. In many cases, this action is justified by the facts, but there are also quite a few issues that are undervalued. The danger in the situation is that the uninformed speculator might start to buy issues regardless of quality just because they are – – -behind the market and loiit p-riced7This could eventluiny'result in a vurnerable pattern, but it appears that this situation does not prevail today. As time goes on, more and more selectivity and caution will be required, but we are entering a phase where the laggard issues could move quite rapidly. Several issues on our recommended list have reached price objectives and are being removed from the list. ALPHA PORTLAND CEMENT recommended at around 40, reached a high of 66 3/4. The upside objective was 65-75. Sellon strength. ALUMINIUM,LTD. has moved up from 45 to 74 3/4. Would accept profits on strength. gETHLEHEM STEEL has moved from a recommended level of 62 1/4 in April to a recent high of 82 1/2. The upside objective was 80-85. Ivould switch into Republic Steel or U. S. Steel which are still below their objectives. FOOD. MACHINERY has moved up from 34 to a recent high of 48 3/4. The upside objective was 45-49 so I would be inclined to take profits on strength. MEAD CORP. has advanced—from the 23-28 area –;'nd is now ntering the'39-43 upside objective area. SPERRY CORP. has advanced from a recommended level of 52 to 78 3/4.The long term pattern suggests an objective of 75-100. Would take profit on strength. As replacements for the issues above,suggest Crane & Co., Yale & Towne, Hewitt-Robins, or Pennsylvania Salt. EDMUND W. TABELL WALSTON & CO. TIlls memordndum 1\ not 10 be construed (1\ !In oHef or \oll(llal,on of oHer to buy 0' sell any \ecUflll5 From lIme 10 hme WIlon & Co or ny PMlner Ih of rIll h.,j,e II IlIlpr11 In lome or 'III of 'h U(urll,el mcnllored hereIn The loreqolng mdle!I1 MI\ been prep'ed by UI al a m!ltlcf of Inlormdhon 01'11) II IS b ''''0 UIlOn In' mMlon beeed rtll'lblc bul 1'101 nt'CUI!Iflly complete 1\ nol qU'I'lntcd as dccurate or Iln1 (lnd II not Interded to forcclole Indepcndent Inqul