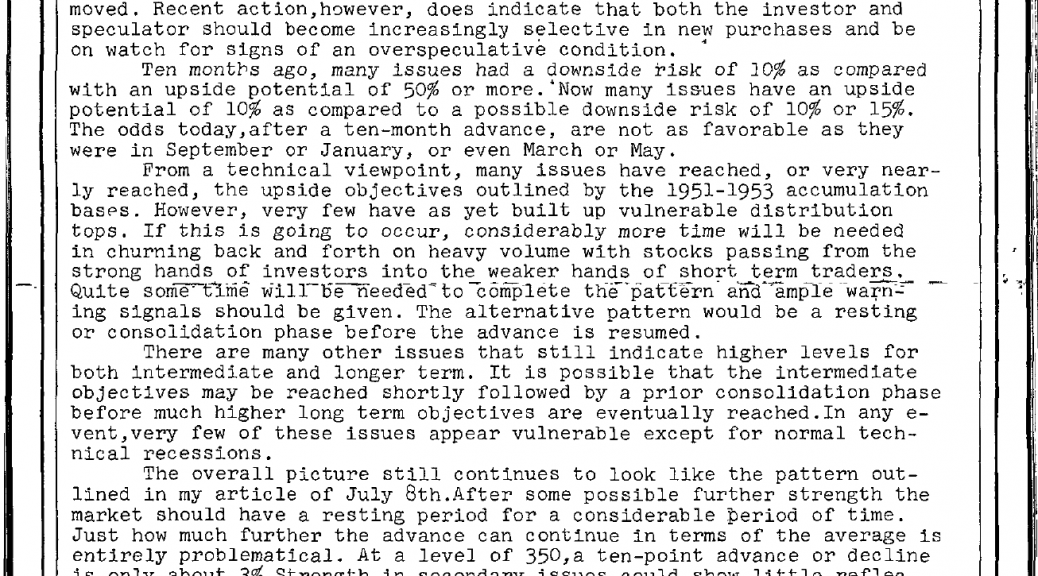 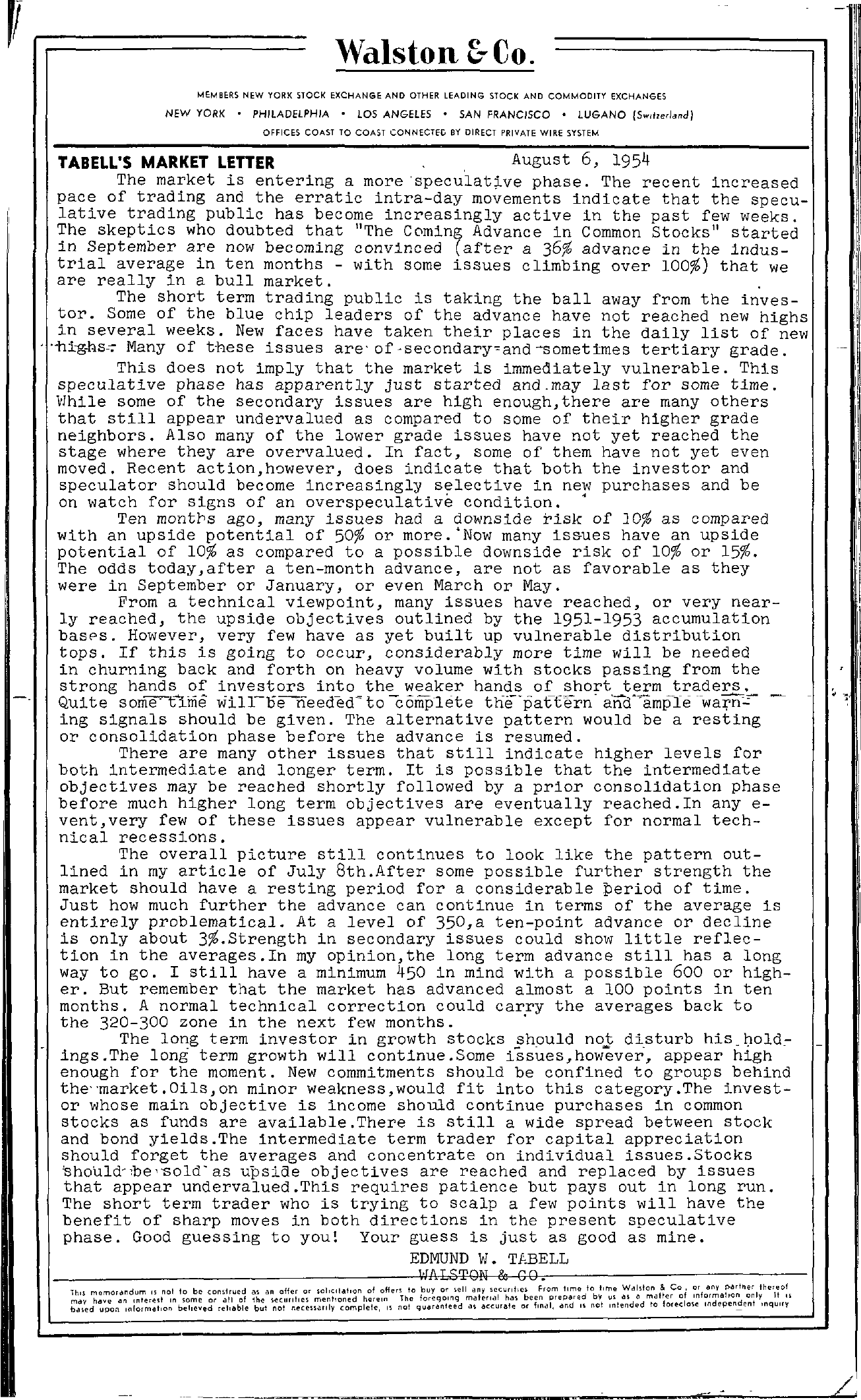 –'j Walston &Co. MEMBERS NEW YORK STOCK eXCHANGE AND OTHER LEADING STOCK AND COMMODITY EXCHANGES NEW YORK PHILADELPHIA LOS ANGElES SAN FRANCISCO LUGANO (Swdwl.,d I OFFICES COAST TO COAST CONNECTE'C BY DIRECT PRIVATE WIRE SYSTEM TABELL'S MARKET LETTER August 6, 1954 The market is entering a more 'speculative phase. The recent increased pace of trading and the erratic intra-day movements indicate that the specu- lative trading public has become increasingly active in the past few weeks. The skeptics who doubted that The Coming Advance in Common Stocks started in September are now becoming convinced (after a 36 advance in the indus- trial average in ten months – with some issues climbing over 100) that we are really in a bull market. The short term trading public is taking the ball away from the inves- tor. Some of the blue chip leaders of the advance have not reached new highs in several weeks. New faces have taken their places in the daily list of new , –hi-g-hs– Many of these issues are- of -secondaryand sometimes tertiary grade. This does not imply that the market is immediately vulnerable. This speculative phase has apparently just started andmay last for some time. vIhile some of the secondary issues are high enough,there are many others that still appear undervalued as compared to some of their higher grade neighbors. Also many of the lower grade issues have not yet reached the stage where they are overvalued. In fact, some of them have not yet even moved. Recent action,hawever, does indicate that both the investor and speculator should become increasingly selective in new purchases and be on watch for signs of an overspeculative condition. ' Ten montrs ago, many issues had a downside risk of 0 as compared with an upside potential of 50 or more. 'Now many issues have an upside potential of 10 as compared to a possible downside risk of 10 or 15. The odds today,after a ten-month advance, are not as favorable as they were in September or January, or even March or May. From a technical viewpoint, many issues have reached, or very near- ly reached, the upside objectives outlined by the 1951-1953 accumulation basps. However, very few have as yet built up vulnerable distribution tops. If this is going to occur, considerably more time will be needed in churning back and forth on heavy volume with stocks passing from the strong hands of investors into the weaker hands of short term traders. Quite some- f'lme wi 11-15eneeded- to comp-lete tnepatern- and&ample –wafn — ing signals should be given. The alternative pattern would be a resting or consolidation phase before the advance is resumed. There are many other issues that still indicate higher levels for both intermediate and longer term. It is possible that the intermediate objectives may be reached shortly followed by a prior consolidation phase before much higher long term objectives are eventually reached.In any e- vent,very few of these issues appear vulnerable except for normal tech- nical recessions. The overall picture still continues to look like the pattern out- lined in my article of July 8th.After some possible further strength the market should have a resting period for a considerable period of time. Just how much further the advance can continue in terms of the average is entirely problematical. At a level of 350,a ten-point advance or decline is only about 3.Strength in secondary issues could show little reflec- tion in the averages.In my opinion,the long term advance still has a long way to go. I still have a minimum 450 in mind with a possible 600 or high- er. But remember that the market has advanced almost a 100 points in ten months. A normal technical correction could carry the averages back to the 320-300 zone in the next few months. . The long term investor in growth stocks should not disturb his hold- – ings.The long term growth will continue.Some issues,however, appear high – enough for the moment. New commitments should be confined to groups behind themarket.Oils,on minor weakness,would fit into this category.The invest- or whose main objective is income should continue purchases in common stocks as funds are available.There is still a wide spread between stock and bond yields.The intermediate term trader for capital appreciation should forget the averages and concentrate on individual issues.Stocks 'should- ,be sold – as upsiCie obj ectives are reached and replaced by issues that appear undervalued.This requires patience but pays out in long run. The short term trader who is trying to scalp a few points will have the benefit of sharp moves in both directions in the present speculative phase. Good guessing to you! Your guess is just as good as mine. – EDMUND W. TABELL liJ,,LgTON lie GO. TIlls mcmorclndum IS not to be COI15trued as an .offer or sol,cltahorl 01 offers to buy or sell any sccurdiCS From time to I'me Wellston & Co, or 'lny fclrlner I thcf eof may hdve an Interest In some or all of the securltlls menltoned herein billed upon InfOrmdllon believed reliable but not necenorlly complete, II The foregOing malenal has been prepared not gUdrdnleed oll d((Urate or !moll, dnd bv not us as a Intended molller of ,n to foreclose foIrnmdeapeIonnenonl y 1t IS ,nquHy I