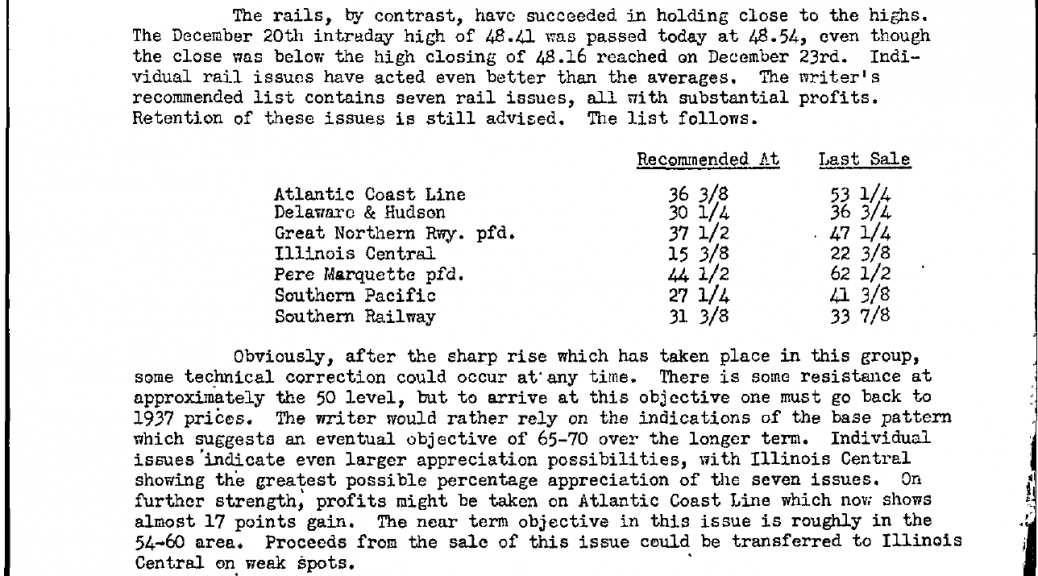 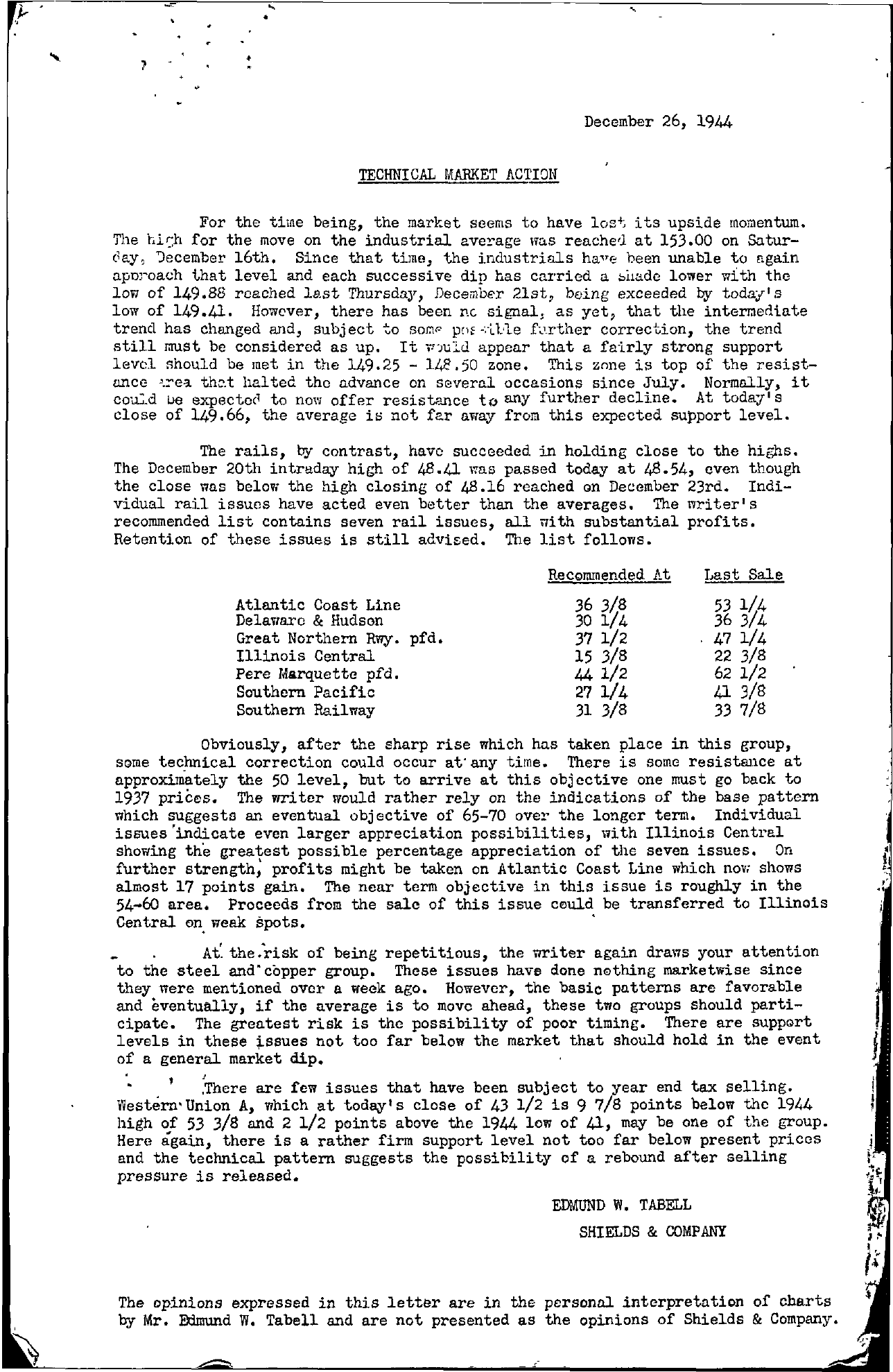 December 26, 1944 TECHNICAL MARKET ACTION For the time being, the market seems to have lost; its upside momentum. The high for the move on the industrial average was reached at 153.00 on Saturday, December 16th. Since that time, the industrials have been unable to again approach that level and each successive dip has carried a shade lower with the low of 149.88 reached last Thursday, December 21st, being exceeded by today's low of 149.41. However, there has been Poe signal, as yet, that the intermediate trend has changed and, subject to some possible further correction, the trend still must be considered as up. It would appear that a fairly strong support level should be met in the 149.25 zone. This zone is top of the resistance area that halted the advance on several occasions since July. Normally, it could be expected to now offer resistance to any further decline. At today's close of 149.66, the average is not far army from this expected support level. The rails, by contrast, have succeeded in holding close to the highs. The December 20th intraday high of 48.41 was passed today at 48.54, even though the close was below the high closing of 48.16 reached on December 23rd. Individual rail issues have acted even better than the averages. The writer's recommended list contains seven rail issues, all with substantial profits. Retention of these issues is still advised. The list follows. Atlantic Coast Line Delavarc & Hudson Great Northern Rwy. pfd. Illinois Central Pere Marquette pfd. Southern Pacific Southern Railway Recommended At 36 3/8 30 1/4 37 1/2 15 3/8 44 1/2 27 1/4 31 3/8 Last Sale 5336 13//44 47 1/4 22 3/8 62 1/2 41 3/8 33 7/8 Obviously, after the sharp rise which has taken place in this group, some technical correction could occur at any time. There is some resistance at approximately the 50 level, but to arrive at this objective one must go back to 1937 The writer would rather rely on the indications of the base pattern which suggests an eventual objective of 65-70 over the longer term. Individual issues 'indicate even larger appreciation possibilities, with Illinois Central shoving the greatest possible percentage appreciation of the seven issues. On further strength; profits might be taken on Atlantic Coast Line which now shows almost 17 points gain. The near term objective in this issue is roughly in the 54-60 area. Proceeds from the sale of this issue could be transferred to Illinois Central on weak spots. At the risk of being repetitious, the writer again draws your attention to the steel and copper group. These issues have done nothing marketwise since they were mentioned over a week ago. However, the basic patterns are favorable and eventually, if the average is to move ahead, these two groups Should participate. The greatest risk is the possibility of poor timing. There are support levels in these issues not too far below the market that should hold in the event of a general market dip. .There are few issues that have been subject to year end tax selling. Western' Union A, which at today's close of 43 1/2 is 9 7/8 points below the 1944 high of 53 3/8 and 2 1/2 points above the 1944 low of 41, may be one of the group. Here again, there is a rather firm support level not too far below present prices and the technical pattern suggests the possibility of a rebound after selling pressure is released. EDMUND W. TABELL SHIELDS & COMPANY The opinions expressed in this letter are in the personal interpretation of charts by Mr. Edmund W. Tabell and are not presented as the opinions of Shields & Company.