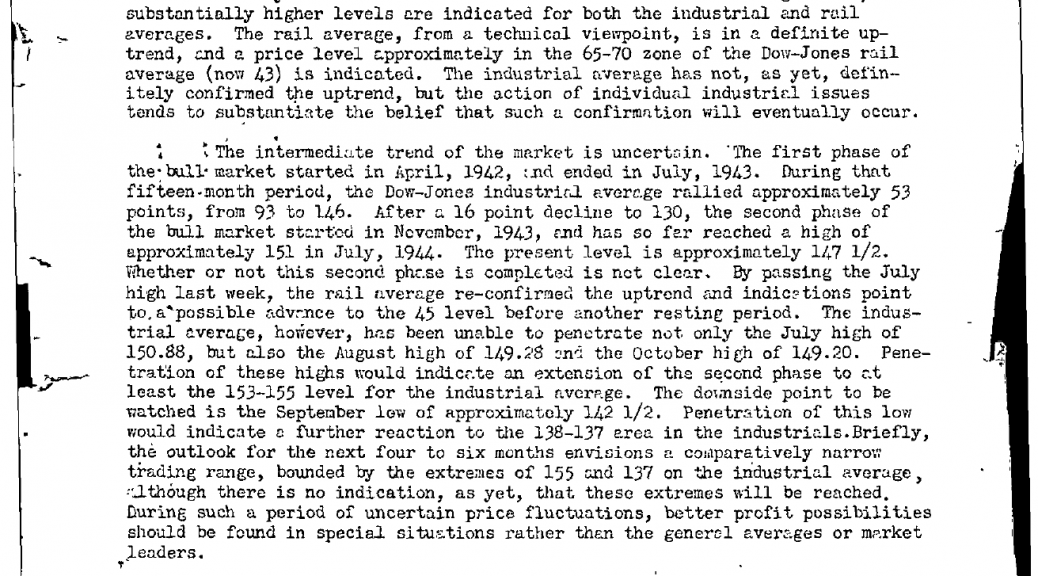 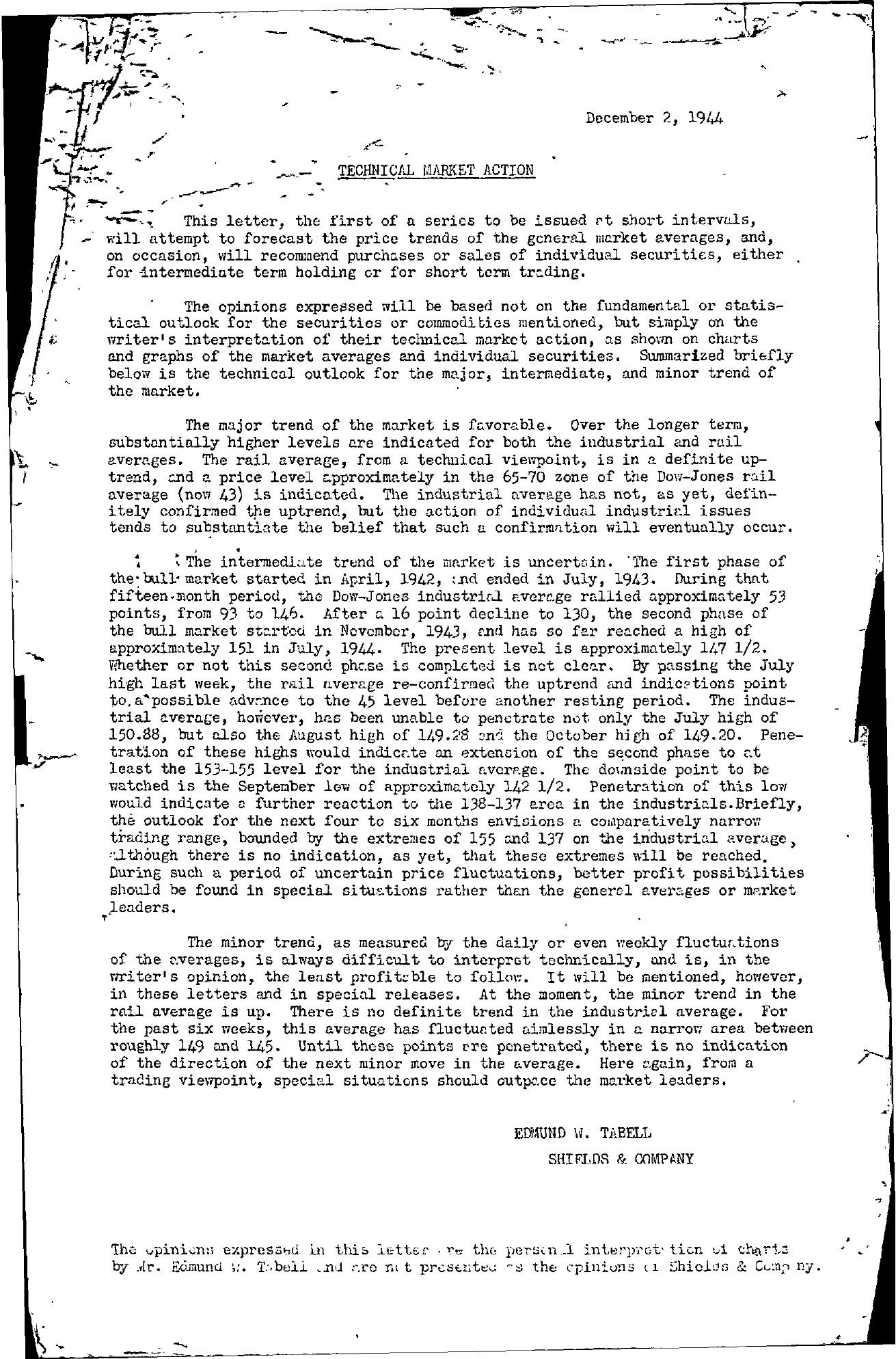 December 2, 1944 TECHNICAL MARKET ACTION This letter, the first of n series to be issued pt short intervals, will attempt to forecast the price trends of the general market averages, and, on occasion, will or sales of individual securities, either for term holding or for short term trending. The opinions expressed will be based not on the fundamental or statistical outlook for the securities or commodities mentioned, but simply on the writer's interpretation of their technical market action, as shown on charts and graphs of the market averages and individual securities. Summarized briefly below is the technical outlook for the major, intermediate, and minor trend of the market. The major trend of the market is favorable. Over the longer term, substantially higher levels are indicated for both the industrial and ruil averages. The rail average, from a technical ViewpoInt, is in 11 definite up– trend, end 11 price level approximately in the 65-70 zone of the Dow-Jones rlil average (now 43) is indicated. The industrial average has not, as yet, definitely confirmed tpe uptrend, but the action of individual industrial issues tends ., the belief that such II confirmation will eventually occur. The intermediate tnnd of the market is '1'he first phase of started in April, 1942, nd ended in July, 1943. During thnt fifteen.month period, the Dow-Jones industrial average mUied approximately 53 points, from 93 to 146. After a 16 point decline to 130, the second phase of the bull market skrtod in November, 1943, has so fe.r reached a high of approximately 151 in July, 1944. The present level is approximately 147 1/2. 'bether or not this second phese is comph.ted is net cleD.r. By passing the July high last week, the rail Ilverllge re-confirmed the uptrend ,.nd tions point to the 45 level before another resting period. The industrial c.vern!;e, h01vever, htls been une.bIe to penetrate nut. only the July high of 150.88, but Dlso the August high of 149.;' 'n the October hl eh of 149.20. Penetration of these highs would indicr.te un extension of the second phase to ret least the 153-155 level for the industrial The dOl.nside point to be 'Ililtched is the September lew of approximately 142 1/2. Penetrltion of this low Viould indicate e further reaction to the 138-137 e.rea in the industrials. Briefly, the outlook for the next four to six months envisions cOhlparatively nnrrol'l trading runge, bounded by the extremes of 155 md 137 on the industrial p.vero.ge, '.lth6ugh there is no indication, as yet, that these extremes will be reached. During such a period of uncertain price fluctuations, better profit possibilities should be found in special situations rather then the general or market leaders. The minor trend, as measurecl b'J the aaily or even weekly fluctuations of the is always difficult to interpret technically, und is, in the writer's opinion, the least profikble to foll)I. It will be mentioned, however, in these letters and in speciul releases. At moment, the minor trend in the rail average is up. There is no definite trend in the industrial average. For the past six weeks, this average has fluctuated in narrow area between roughly 149 and 145. Until these points penetrated, there is no indication of the direction of the next minor move in the average. Here c.g!in, from a trading viewpoint, speci,,,l situations should outp.oe the market leaders. EDMUND W. TABELL SHIFLDS & COMPANY The opinions expressed in this letter are the personal interpretation of charts by Edmund W. Tabell and are not presented as the opinions of Shields & Company