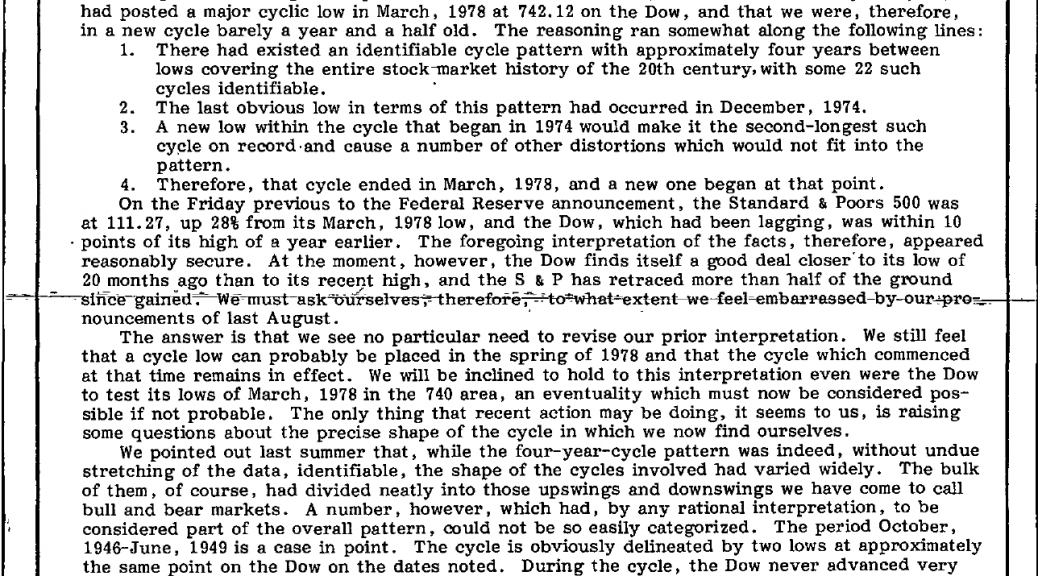 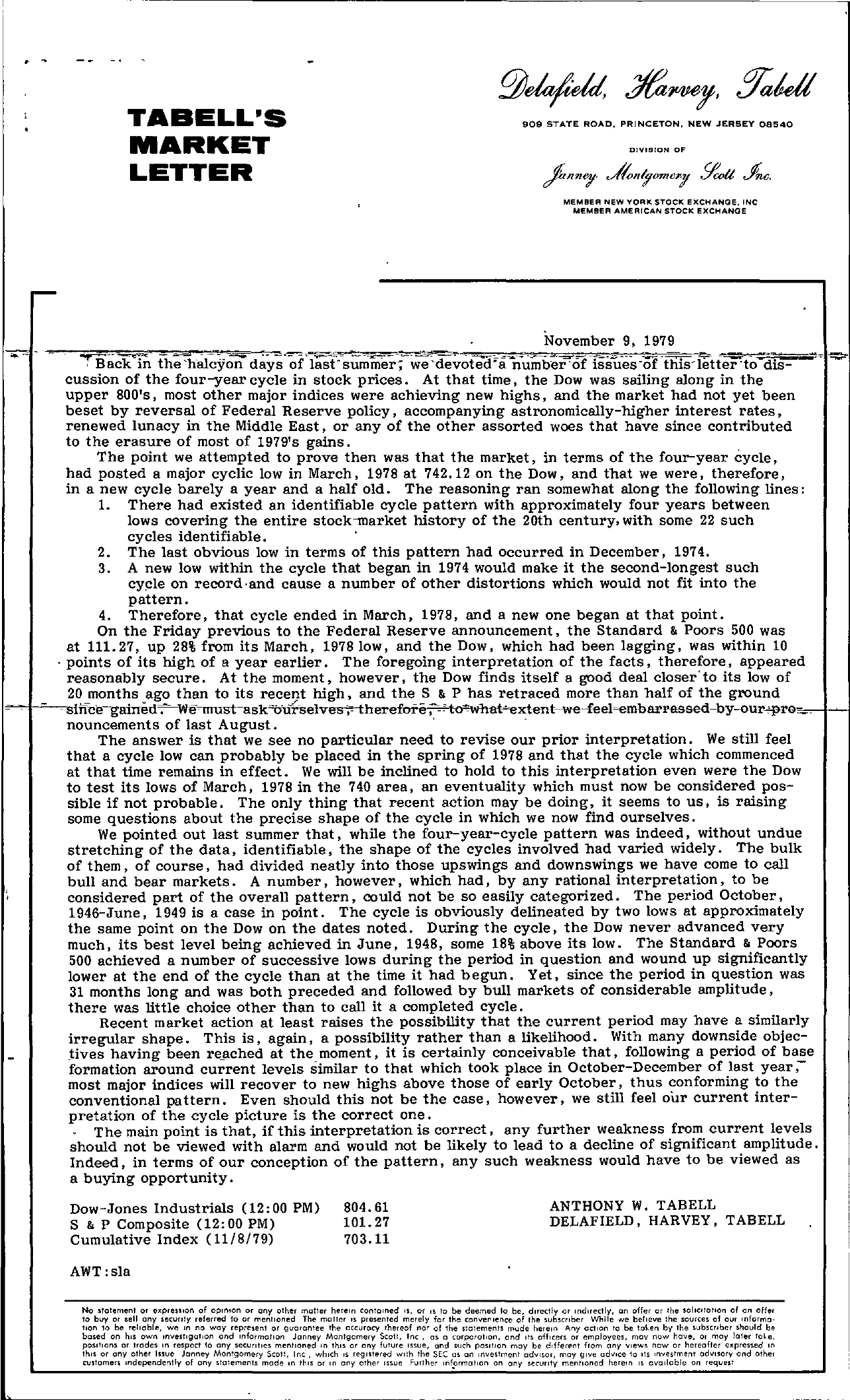 .. TABELL'S MARKET LETTER 909 STATE ROAD, PRINCETON, NEW .JERSEY 08540 DIVISION OF MEMBER NEW YORK STOCK EXCHANQE. tNC MEMBER AMERICAN STOCK EXCHANGE .;..'B'a November 9, 1979 isiiu'essummer; ;;-cdevcteih,llumterof 'Of this' cussion of the four-year cycle in stock prices. At that time, the Dow was sailing along in the upper 800's, most other major indices were achieving new highs, and the market had not yet been beset by reversal of Federal Reserve policy, accompanying astronomically-higher interest rates, renewed lunacy in the Middle East, or any of the other assorted woes that have since contributed to the erasure of most of 1979's gains. The point we attempted to prove then was that the market, in terms of the four-year cycle, had posted a major cyclic low in March, 1978 at 742.12 on the Dow, and that we were, therefore, in a new cycle barely a year and a half old. The reasoning ran somewhat along the following lines 1. There had existed an identifiable cycle pattern with approximately four years between lows covering the entire stock-market history of the 20th century, with some 22 such cycles identifiable. 2. The last obvious low in terms of this pattern had occurred in December, 1974. 3. A new low within the cycle that began in 1974 would make it the second-longest such on recordand cause a number of other distortions which would not fit into the pattern. 4. Therefore, that cycle ended in March, 1978, and a new one began at that point. On the Friday previous to the Federal Reserve announcement, the Standard & Poors 500 was at 111. 27, up 28 from its March, 1978 low, and the Dow, which had been lagging, was within 10 points of its high of a year earlier. The foregoing interpretation of the facts, therefore, appeared reasonably secure. At the moment, however, the Dow finds itself a good deal closerto its low of 20 months ago than to its recent high, and the S & P has retraced more than half of the ground nouncements of last August. ., The answer is that we see no particular need to revise our prior interpretation. We still feel that a cycle low can probably be placed in the spring of 1978 and that the cycle which commenced at that time remains in effect. We will be inclined to hold to this interpretation even were the Dow to test its lows of March, 1978 in the 740 area, an eventuality which must now be considered pos- sible if not probable. The only thing that recent action may be doing, it seems to us, is raising some questions about the precise shape of the cycle in which we now find ourselves. We pointed out last summer that, while the four-year-cycle pattern was indeed, without undue stretching of the data, identifiable, the shape of the cycles involved had varied widely. The bulk of them, of course, had divided neatly into those upswings and downswings we have come to call bull and bear markets. A number, however, which had, by any rational interpretation, to be considered part of the overall pattern, could not be so easily categorized. The period October, 1946-June, 1949 is a case in point. The cycle is obviously delineated by two lows at approximately the same point on the Dow on the dates noted. During the cycle, the Dow never advanced very much, its best level being achieved in June, 1948, some 18 above its low. The Standard & Poors 500 achieved a number of successive lows during the period in question and wound up significantly lower at the end of the cycle than at the time it had begun. Yet, since the period in question was 31 months long and was both preceded and followed by bull markets of considerable amplitude, there was little choice other than to call it a completed cycle. Recent market action at least raises the possibility that the current period may have a similarly irregular shape. This is, again, a possibility rather than a likelihood. With many downside objec- tives having been reached at the moment, it is certainly conceivable that, following a period of base formation around current levels similar to that which took place in October-December of last year ,- most major indices will recover to new highs above those of early October, thus conforming to the conventional pattern. Even should this not be the case, however, we still feel our current inter- pretation of the cycle picture is the correct one. The main point is that, if this interpretation is correct, any further weakness from current levels should not be viewed with alarm and would not be likely to lead to a decline of significant amplitude. Indeed, in terms of our conception of the pattern, any such weakness would have to be viewed as a buying opportunity. Dow-Jones Industrials (12 00 PM) S & P Composite (12 00 PM) Cumulative Index (11/8/79) 804.61 101. 27 703.11 ANTHONY W. TABELL DELAFIELD, HARVEY, TABELL AWTsla No statement or expression of opinion or any other motter herein contolned IS, or IS to be deemed to be, directly .or Indirectly, an offer or the sohCltotlon of on offer to buy or sell any Hlcurlty referred 10 or mentIoned The motter IS presented merely for the converqencc of the subscrIber While we believe the sources of our mforma- lion fa be reliable, we m no way represent or guarantee the accuracy thereof nor of fhe statements mude herem Any oct Ion to be by the subscflber should be based on hiS own InvestlgOTlon and mfarmatlon Janney Montgomery Scot!, Inc, as a corporation, and Its officers or employees, mav now have, or may later positions or trades m respect to any securrtles mentioned In thiS or any future Issue, and such positron may be d,fferent from any views now or hereafter expressed In thiS or any other Issue Jonney Montgomery Scott, Inc, which IS registered With the SEC as on Ir'Ivestment adVisor, may give odv,ce to Its Investment odvlsory and other customers mdependently of any statements mode 'n thiS or 'n any other Issue Further mf.ormot,on on any security mentioned herem IS ovorloble on request