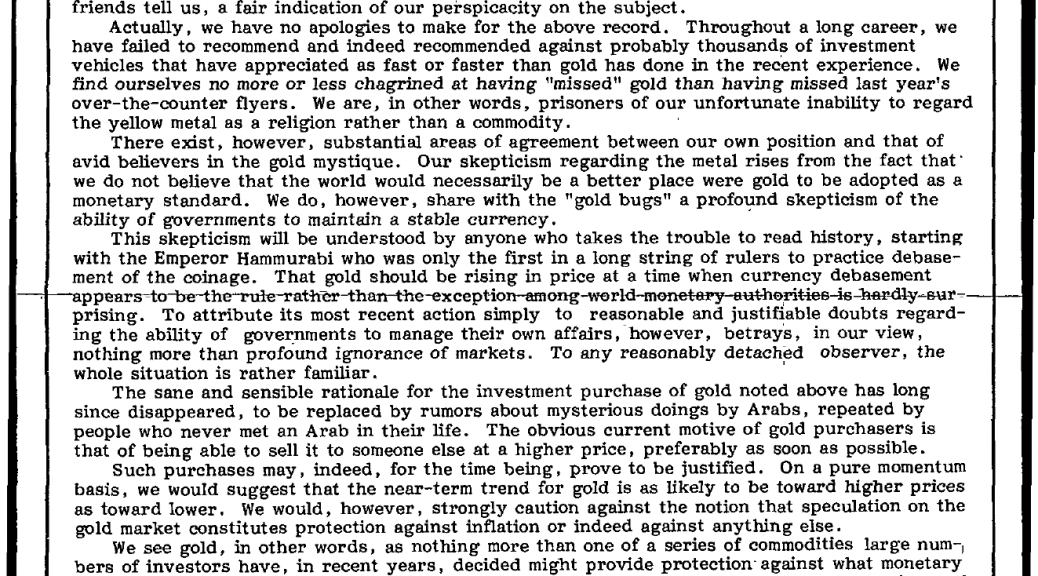 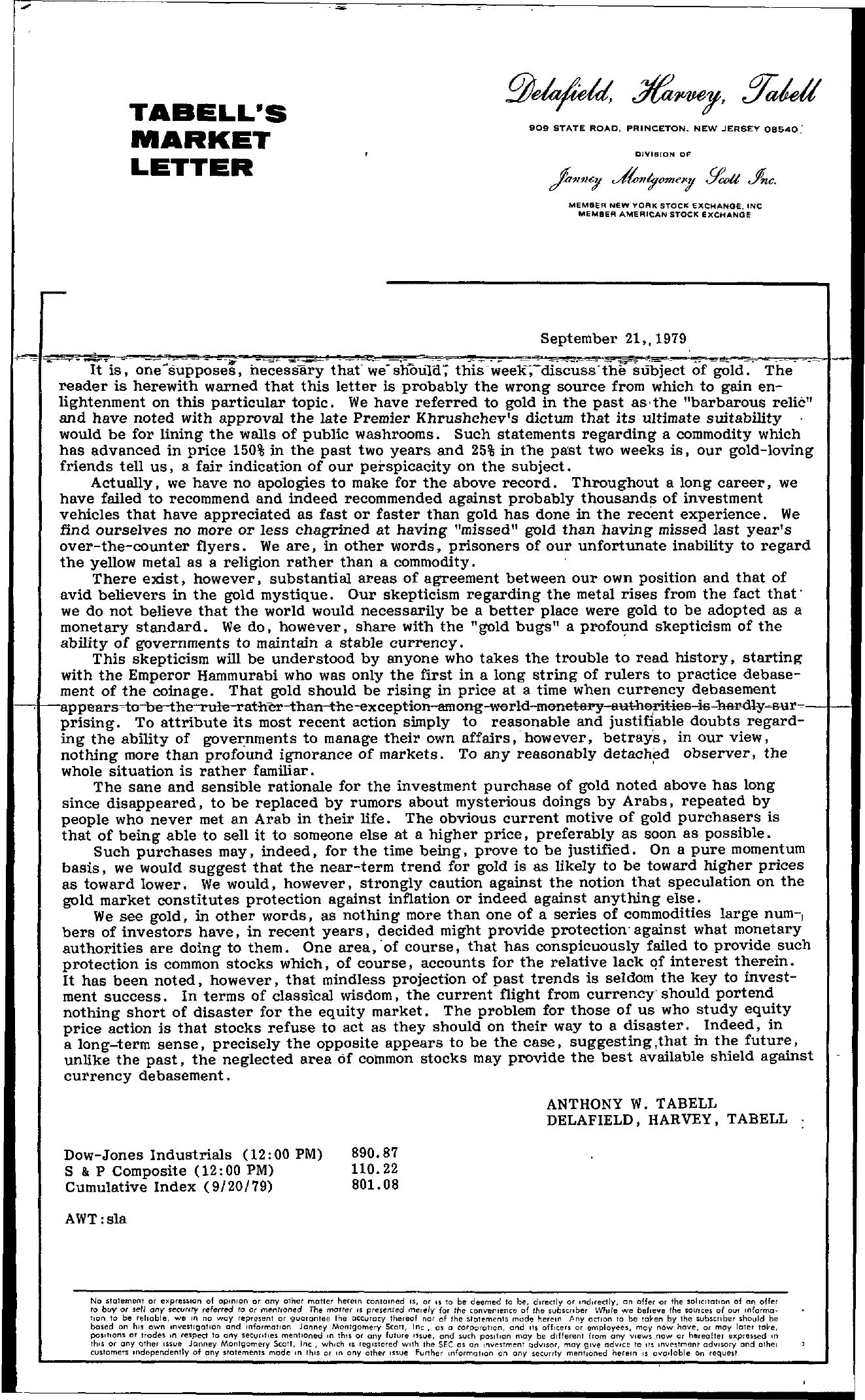 TABELL'S MARKET LETTER 909 STATE ROAD, PRINCETON. NEW JERSEY 08540 DIYISION OF MEMBeR NEW VORK STOCK EXCHANGe, INC MEMBEA AMEAICAN STOCK eXCHANGe September 21,.1979 is, , necessary that- we- shOtiIa; gold. The reader is herewith warned that this letter is probably the wrong source from which to gain en- lightenment on this particular topic. We have referred to gold in the past as,the barbarous relic and have noted with approval the late Premier Khrushchev's dictum that its Ultimate suitability would be for lining the walls of public washrooms. Such statements regarding a commodity which has advanced in price 150 in the past two years and 25 in the past two weeks is, our gold-loving friends tell us, a fair indication of our perspicacity on the subject. Actually, we have no apologies to make for the above record. Throughout a long career, we have failed to recommend and indeed recommended against probably thousands of investment vehicles that have appreciated as fast or faster than gold has done in the recent experience. We find ourselves no more or less chagrined at having missed gold than having missed last year's over-the-counter flyers. We are, in other words, prisoners of our unfortunate inability to regard the yellow metal as a religion rather than a commodity. There exist, however, substantial areas of agreement between our own position and that of avid believers in the gold mystique. Our skepticism regarding the metal rises from the fact that' we do not believe that the world would necessarily be a better place were gold to be adopted as a monetary standard. We do, however, share with the gold bugs a profound skepticism of the ability of governments to maintain a stable currency. ' This skepticism will be understood by anyone who takes the trouble to read history, starting with the Emperor Hammurabi who was only the first in a long string of rulers to practice debase- ment of the coinage. That gold should be rising in price at a time when currency debasement or'ising. To attribute its most recent action simply to reasonable and urlarlle doubts regard- g the ability of governments to manage their own affairs, -however, betray's, in our view, nothing more than profound ignorance of markets. To any reasonably detached observer, the whole situation is rather familiar. . The sane and sensible rationale for the investment purchase of gold noted above has long since disappeared, to be replaced by rumors about mysterious doings by Arabs, repeated by people who never met an Arab in their life. The obvious current motive of gold purchasers is that of being able to sell it to someone else at a higher price, preferably as soon as possible. Such purchases may, indeed, for the time being, prove to be justified. On a pure momentum basis, we would suggest that the near-term trend for gold is as likely to be toward higher prices as toward lower. We would, however, strongly caution against the notion that speculation on the gold market constitutes protection against inflation or indeed against anything else. We see gold, in other words, as nothing more than one of a series of commodities large num-, bers of investors have, in recent years, decided might provide protection- against what monetary authorities are doing to them. One area, 'of course, that has conspicuously failed to provide such protection is common stocks which, of course, accounts for the relative lack qf interest therein. It has been noted, however, that mindless projection of past trends is seldom the key to invest- ment success. In terms of classical wisdom, the current flight from currency' should portend nothing short of disaster for the equity market. The problem for those of us who study equity price action is that stocks refuse to act as they should on their way to a disaster. Indeed, in a long-term sense, precisely the opposite appears to be the case, suggesting ,that in the future, unlike the past, the neglected area Of common stocks may provide the best available shield against currency debasement. ANTHONY W. TABELL DELAFIELD, HARVEY, TABELL Dow-Jones Industrials (1200 PM) S 8. P Composite (12 00 PM) Cumulative Index (9120179) 890.87 110.22 801. 08 AWTsla No statement or e)(prenlOn of opinIOn or any other motter herein contolned IS, or to be deemed to be, directly or indirectly, an offer or the OIICltotlon of on offer to buy or sell any scctmry referred to or menlfoned The morrer JS presened merely for Ine converlence of the subscher Wfule we believe Ine sources of our Informa- flon to be reliable, we III no way represent or guaranlee the accuracy thereof nor of thc stotements mod!! herein Pony adlon to be by the should be bcued on hiS own mveshgatlon and Information Janney Montgomery Scofl, tnc, as a corporaTIon, ond Its officers or employees, may now have, or may later poSitions ar trodes In reSpect to ony sCQJntles mentioned In thiS or any future 15sue, and such poSition may be ddferenl from any views now or hereafter expressed In thiS or any (lther Issue Janney Montgomery Scali, Inc, which IS reglslt!red With the SEC os on Investment adVisor, moy give adVICe to Its Investment odvlOry ond othel customen Independently of ony statements mode In thiS or 10 any other Issue Further mform(\lon on any securrty mentioned herem IS aVailable On request