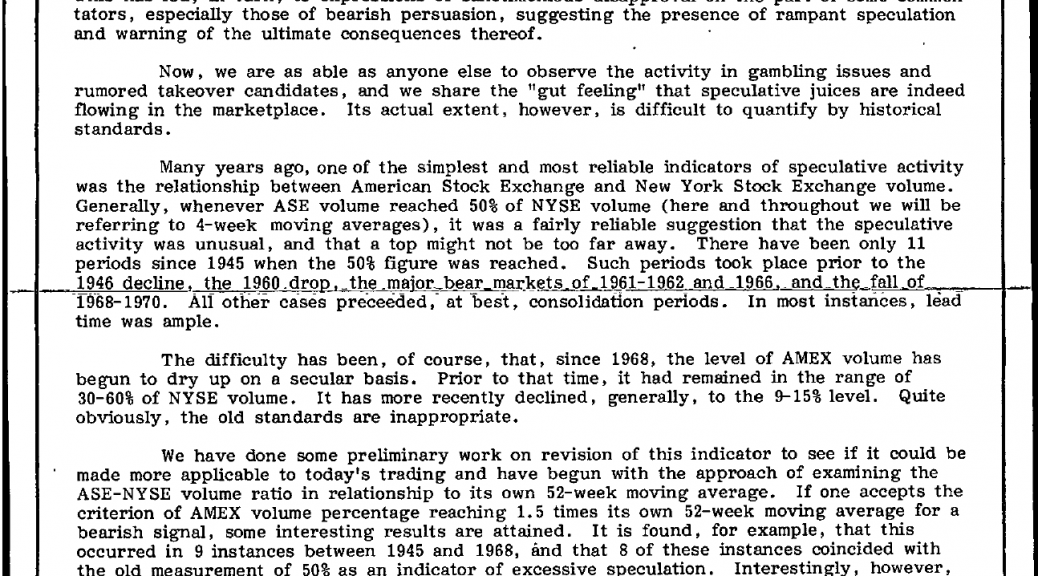 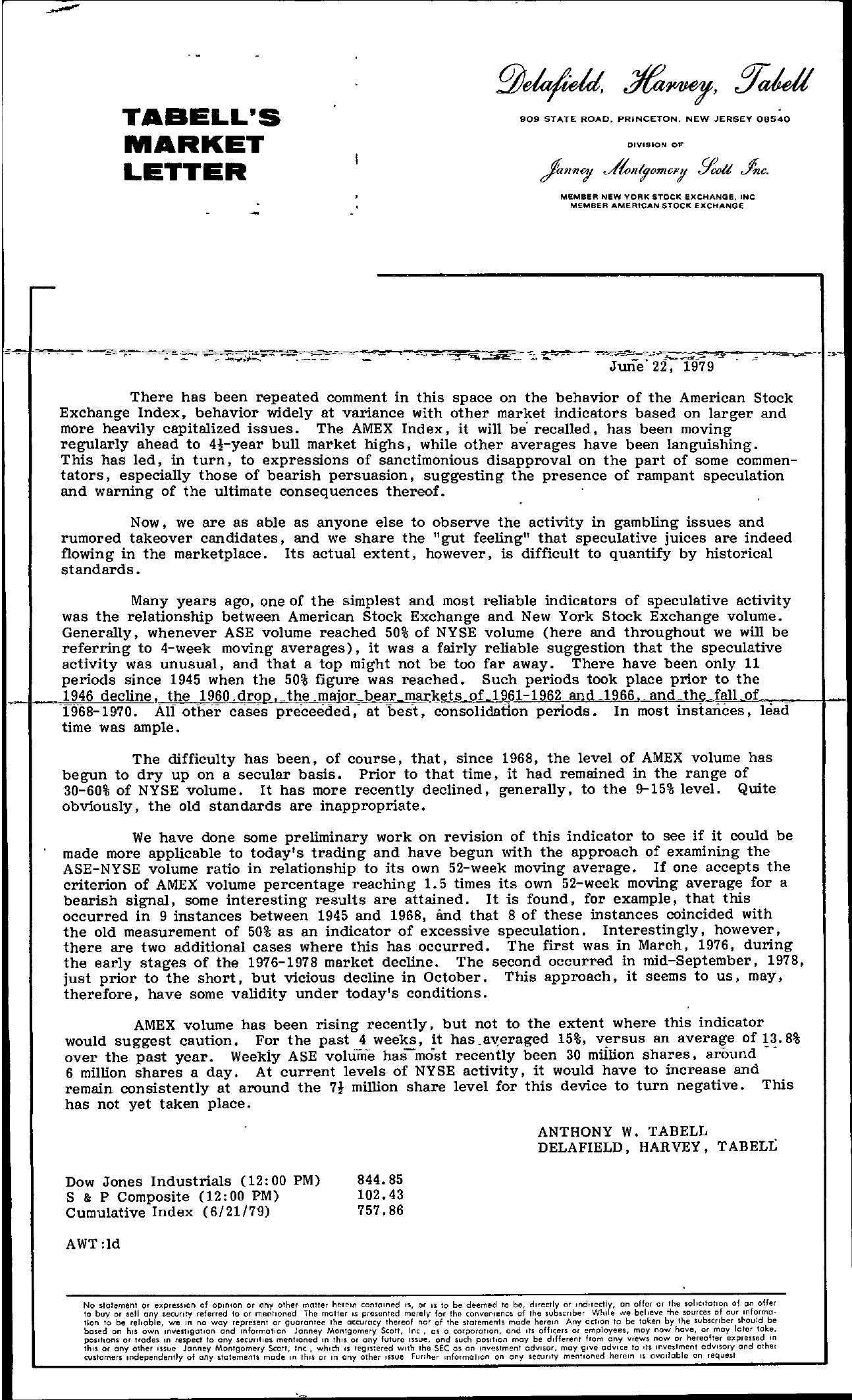 TABELL'S MARKET LETTER 909 STATE ROAD. PRINCETON. NEW JERSEY 08540 DIVISION OF MEMBER New YORK STOCK EXCHANGE, INC MEMBER AMERICAN STOCK EXCHANGE – ….,.,.,,- June 22, 1979 There has been repeated comment in this space on the behavior of the American Stock Exchange Index, behavior widely at variance with other market indicators based on larger and more heavily capitalized issues. The AMEX Index, it will be' recalled, has been moving regularly ahead to H-year bull market highs, while other averages have been languishing. This has led, in turn, to expressions of sanctimonious disapproval on the part of some commentators, especially those of bearish persuasion, suggesting the presence of rampant speculation and warning of the ultimate consequences thereof. Now, we are as able as anyone else to observe the activity in gambling issues and rumored takeover candidates, and we share the gut feeling that speculative juices are indeed flowing in the marketplace. Its actual extent, however, is difficult to quantify by historical standards. Many years ago, one of the simplest and most reliable indicators of speculative activity was the relationShip between American Stock Exchange and New York Stock Exchange volume. Generally, whenever ASE volume reached 50 of NYSE volume (here and throughout we will be referring to 4-week moving averages), it was a fairly reliable suggestion that the speculative activity was unusual, and that a top might not be too far away. There have been only 11 periods since 1945 when the 50 figure was reached. Such periods took place prior to the 1946 decline, the 1960 ,drop, the ,majorbear mar!ets of 1961-1962 and .1966, li68-1970. All other cases preceeded at best, consolidation periods. In most instances, lead time was ample. The difficulty has been, of course, that, since 1968, the level of AMEX volume has begun to dry up on a secular basis. Prior to that time, it had remained in the range of 30-60 of NYSE volume. It has more recently declined, generally, to the 9-15 level. Quite obviously, the old standards are inappropriate. We have done some preliminary work on reVlSlOn of this indicator to see if it could be made more applicable to today's trading and have begun with the approach of examining the ASE-NYSE volume ratio in relationship to its own 52-week moving average. If one accepts the criterion of AMEX volume percentage reaching 1. 5 times its own 52-week moving average for a bearish signal, some interesting results are attained. It is found, for example, that this occurred in 9 instances between 1945 and 1968, and that 8 of these instances coincided with the old measurement of 50 as an indicator of excessive speculation. Interestingly, however, there are two additional cases where this has occurred. The first was in March, 1976, during the early stages of the 1976-1978 market decline. The second occurred in mid-September, 1978, just prior to the short, but vicious decline in October. This approach, it seems to us, may, therefore, have some validity under today's conditions. AMEX volume has been rising recently, but not to the extent where this indicator would suggest caution. For the past 4 weeks, it has.averaged 15, versus an average of 13.8 over the past year. Weekly ASE voluffi-e has-most recently been 30 million shares, around -' 6 million shares a day. At current levels of NYSE activity, it would have to increase and remain consistently at around the 7! million share level for this device to turn negative. This has not yet taken place, ANTHONY W. TABELL DELAFIELD, HARVEY, TABELL Dow Jones Industrials (12 00 PM) S & P Composite (1200 PM) Cumulative Index (6/21/79) 844.85 102.43 757.86 AWT ld – No statement or expression of opinIon or any other matler herein contolned 15, or IS to be deemed to be, directly or mdrrectly, on offer or the sollcltotlon of on offer to buy or sell any seCtJnty referred to or mentioned The matter IS presented merely for the of the subscriber While -ne believe the SOl,lrces of our informa- tion to be relloble, we In no way represent or guarantee Ihe accuracy thereof nor of the statements mude herein Any ochon to be taken by the subscriber should be bosed on hiS own invesTigation and infOrmation lonney Montgomery Scott, Inc, as a corporation, ond Its officers or employees, moy now hove, or may lotcr toke, poslhons or Trades In respect to ony seCtJrltles mentioned In thiS or ony futurc Issue, ond such pOSition may be different from ony v,ews now or hereafter expressed In thiS or any other Issue Janney Montgomery Scotl, Inc, which 15 reglsered With the SEC as on Investment adVisor, moy give odvlce to lIS Investment adVisory and other customers Independently of any statements mode In thiS or In any other Issue Fl,Irrher Information on any security mentioned herein IS aVOIlable on request