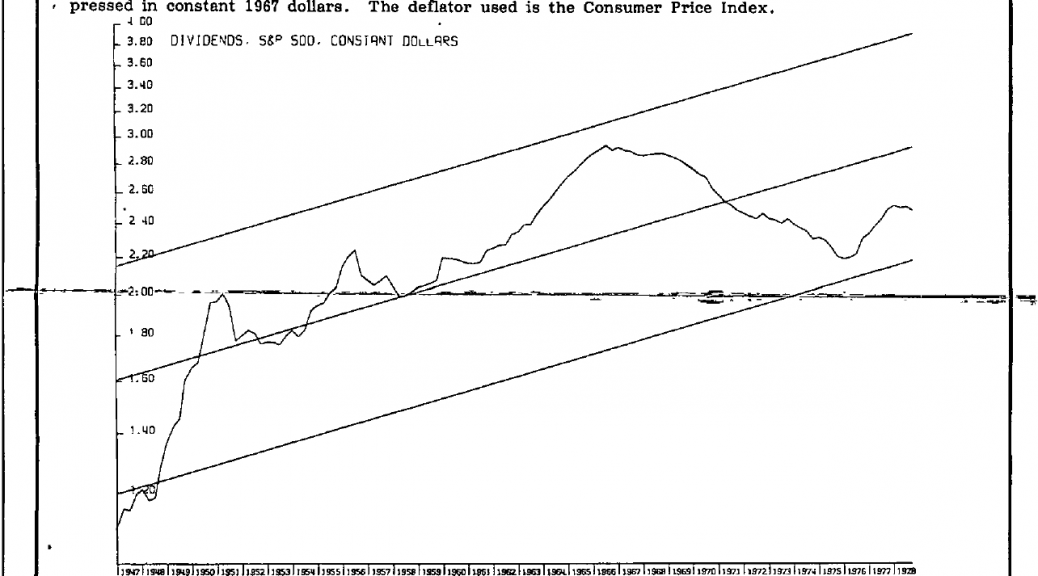 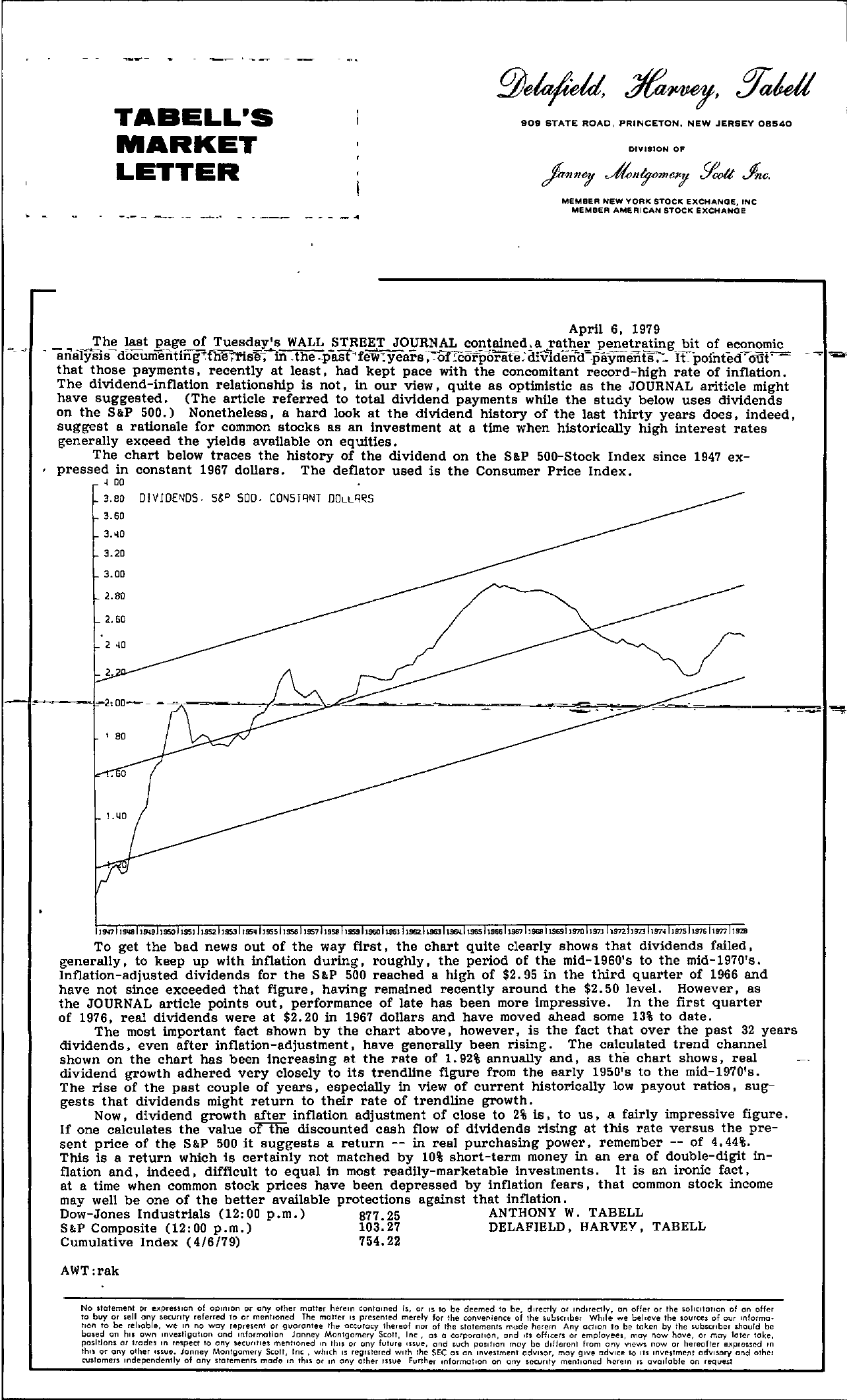 TABELL'S MARKET LETTER – ……….. . .011 909 STATE ROAD, PRINCETON. NEW JERSEY 08540 DIVISION OF MEMBER NEW YORK STOCK EXCHANGE, INC MEMBER AMERICAN STOCK EXCHANGE !B-st analYsis of April 6, 1979 WALL STREET JOURNAL contained, a atlle! penetrating bit of economic iri .the . It – that those payments, recently at least, had kept pace with the concomitant record-high rate of inflation. The dividend-inflation relationship is not, in our view, quite as optimistic as the JOURNAL ariticle might have suggested. (The article referred to total dividend payments while the study below uses dividends on the SiP 500.) Nonetheless, a hard look at the dividend history of the last thirty years does, indeed, suggest a rationale for common stocks as an investment at a time when historically high interest rates generally exceed the yields available on equities. The chart below traces the history of the dividend on the SiP 500-Stock Index since 1947 ex- pressed in constant 1967 dollars. The deflator used is the Consumer Price Index. 00 3.80 5&0 500. 3.60 3.0-1.0 3.20 3.00 2.80 2.60 '' To get the bad news out of the way first, the chart quite clearly shows that dividends failed, generally, to keep up with inflation during, roughly, the period of the mid-1960's to the mid-1970's. Inflation-adjusted dividends for the SiP 500 reached a high of 2.95 in the third quarter of 1966 and have not since exceeded that figure, having remained recently around the 2.50 level. However, as the JOURNAL article points out, performance of late haa been more impressive. In the first quarter of 1976, real dividends were at 2.20 in 1967 dollars and have moved ahead some 13 to date. The most important fact shown by the chart above, however, is the fact that over the past 32 years dividends, even after inflation-adjustment, have generally been rising. The calculated trend channel shown on the chart has been increasing at the rate of 1. 92 annually and, aa the chart shows, real dividend growth adhered very closely to its trendline figure from the early 1950's to the mid-1970's. The rise of the past couple of years, especially in view of current historically low payout ratios, sug- gests that dividends might return to their rate of trendline growth. Now, dividend growth after inflation adjustment of close to 2 is, to us, a fairly impressive figure. If one calculates the value 01'the discounted caah flow of dividends rising at this rate versus the pre- sent price of the SiP 500 it suggests a return — in real purchasing power, remember — of 4.44. This is a return which is certainly not matched by 10 short-term money in an era of double-digit in- flation and, indeed, difficult to equal in most readily-marketable investments. It is an ironic fact, at a time when common stock prices have been depressed by inflation fears, that common stock income may well be one of the better available protections against that inflation. Dow-Jones Industrials (1200 p.m.) 877.25 ANTHONY W. TABELL S&P Composite (1200 p.m.) 103.27 DELAFIELD, BARVEY, TABELL Cumulative Index (4/6/79) 754.22 AWTrak No statement or exprenlon of opinion or any other molter herein contolned Is, or IS 10 be deemed to be, directly Of mdlrectly, on offer or the sollcltotlon of an offer to buy or sell any security referred to or mentioned Tne matter IS presented merely for tne convenience of tne subscriber While we beheve the sources of our Informo tlon to be reliable, we In no way represent or guarantee the accuracy tnereof nor of Ihe stolements mode nerem Any action to be token by the subscriber should be based on nls own Invesllgohon and Informallon Janney Montgomery SCali, Inc, as a corporation, and Its officers or employees, may now have, or may later lake, positions or trades 1n respect 10 any seCUrities mentIoned m thiS or any future Issue, and such POSition may be ddferent from ony vIews now or hereafter expressed 1n thl or ony olher Issue. Janney Montgomery Scott, tnc , which IS regIstered With the SEC as on Investment adVisor, may give adVice to lIs Investment odv15.ory and othel customers Independently of any statements mode 1n Ih,s or In any other Issue Further information on any securlty menlloned herein IS aVailable on request