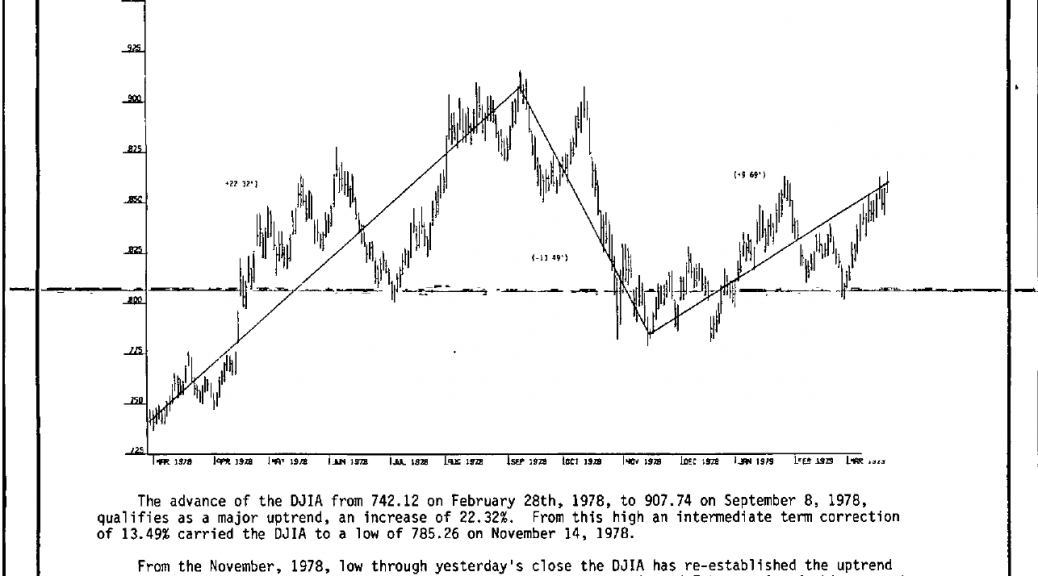 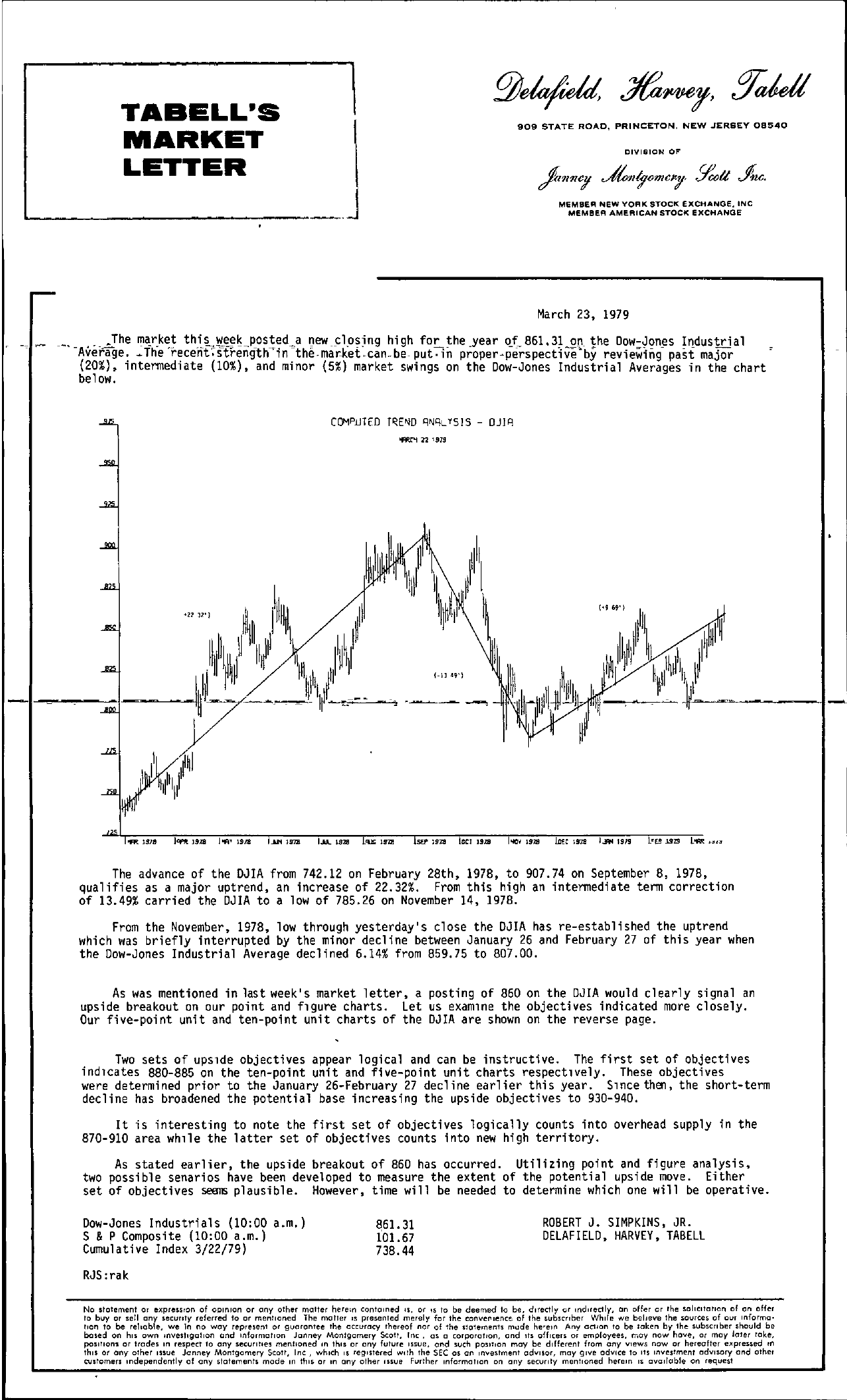 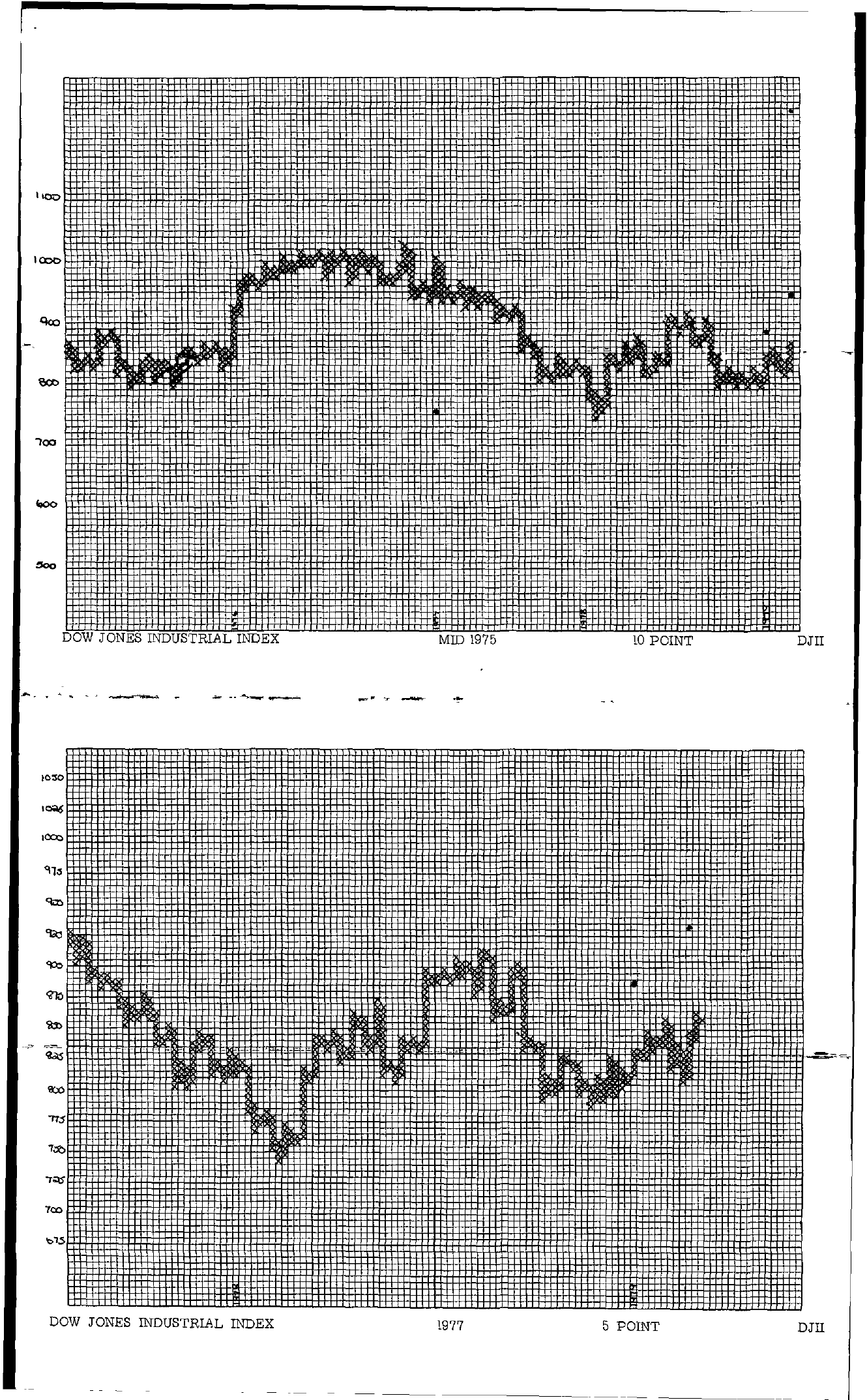 TABELL'S MARKET LETTER 1 J 909 STATE ROAD, PRINCETON, NEW JERSEY 08540 DIVISION OF MEMBER NEW YORK STOCI( eXCHANGE. INC MEMBER AMERICAN STOCK eXCHANGE March 23, 1979 .The m,rket newclpsing high for the ,year oJ861.31 On, the Dow-Jones Industrial -Avefage. proper-perspective'by reviewing past major (20), intermediate (10), and minor (5) market swings on the Dow-Jones Industrial Averages in the chart below. COMPDTED – DJl8 SEI sza eel 19ZB 19l1! inft 1978 1.RoI 19/9 t o e.l9Z9 lw The advance of the DJIA from 742.12 on February 28th, 1978, to 907.74 on September 8, 1978, qualifies as a major uptrend, an increase of 22.32. From this high an intermediate term correction of 13.49 carried the DJIA to a low of 785.26 on November 14, 1978. From the November, 1978, low through yesterday'S close the DJIA has re-established the uptrend which was briefly interrupted by the minor decline between January 26 and February 27 of this year when the Dow-Jones Industrial Average declined 6.14 from 859.75 to 807.00. As was mentioned in last week's market letter, a posting of 860 on the DJIA would clearly signal an upside breakout on our pOint and flgure charts. Let us examlne the objectives indicated more closely. Our five-point unit and ten-point unit charts of the DJIA are shown on the reverse page. Two sets of upslde objectives appear logical and can be instructive. The first set of objectives indlcates 880-885 on the ten-pOint unit and five-point unit charts respectlvely. These objectives were determined prior to the January 26-February 27 decline earlier this year. Slnce then, the short-term decline has broadened the potential base increasing the upside objectives to 930-940. It is interesting to note the first set of objectives 109ically counts into overhead supply in the 870-910 area whlle the latter set of objectives counts into new high territory. As stated earlier, the upside breakout of 860 has occurred. Utilizing point and figure analysis, two possible senarios have been developed to measure the extent of the potential upside move. Either set of objectives seems plausible. However, time will be needed to determine which one will be operative. Dow-Jones Industrials (1000 a.m.) S &P Composite (1000 a.m.) Cumulative Index 3/22/79) RJS rak 31 101.67 738.44 ROBERT J. SIMPKINS, JR. DELAFIELD, HARVEY, TABELL No statement or expression of opinion or any other mailer herem contolned U, or IS to be deemed 10 be, directly or indirectly, on offer or the soliCitatIOn of on offer to buy Of sell any lecunty referred to or mentioned The mOiler IS presented merely for the conver'lenCE; of the subSCriber While we believe the sources of our information to be reliable, we In no way represent or guarantee the accuracy thereof nor of the statements mude he'em Any action to be taken by the subSCriber should be based on hiS own investigation and Information Janney Montgomery Scott, tnc. as a corporatIon, and ItS officers or employees, moy now have, or may aler lake, positions or trades m respect to any securities menlloned m thiS or any future Issue, ond such POSItion moy be different from ony vIews now or hereofter expressed In thiS or any other Issue Janney Montgomery Scot!, tnc, whICh IS registered wllh the SEC as an Investment adVisor, may give adVICe to Its Investment adVISOry and other CVstomers Independently of any statements mode m ,I'lIS or m any other Issue Further Infarmatlon on any security mentioned hercm IS ovollable on request Ico .00 … ——- POINT DJII 700 DOW JONES INDUSTRIAL INDEX 1977 5 POINT DJII