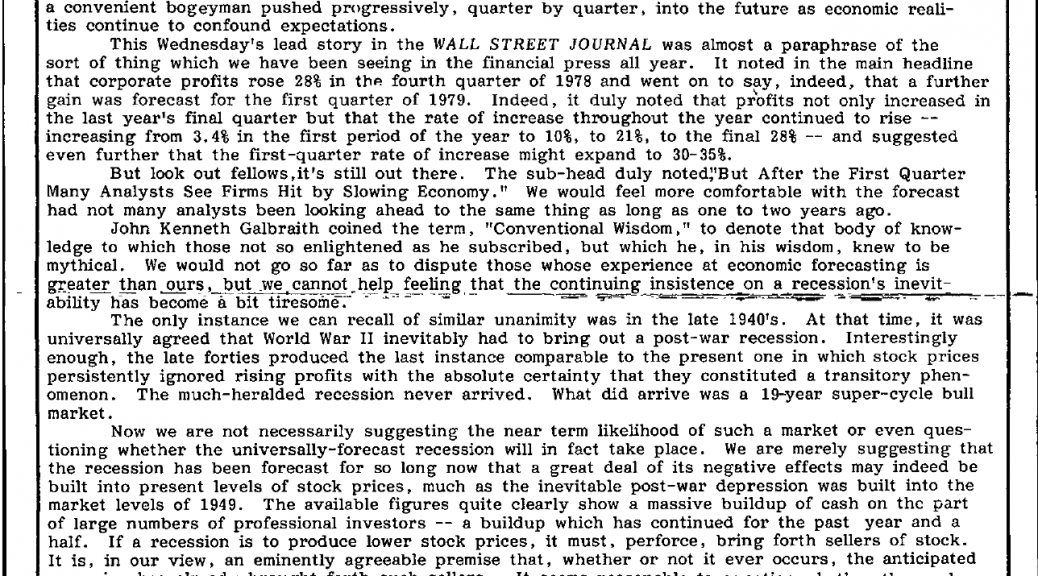 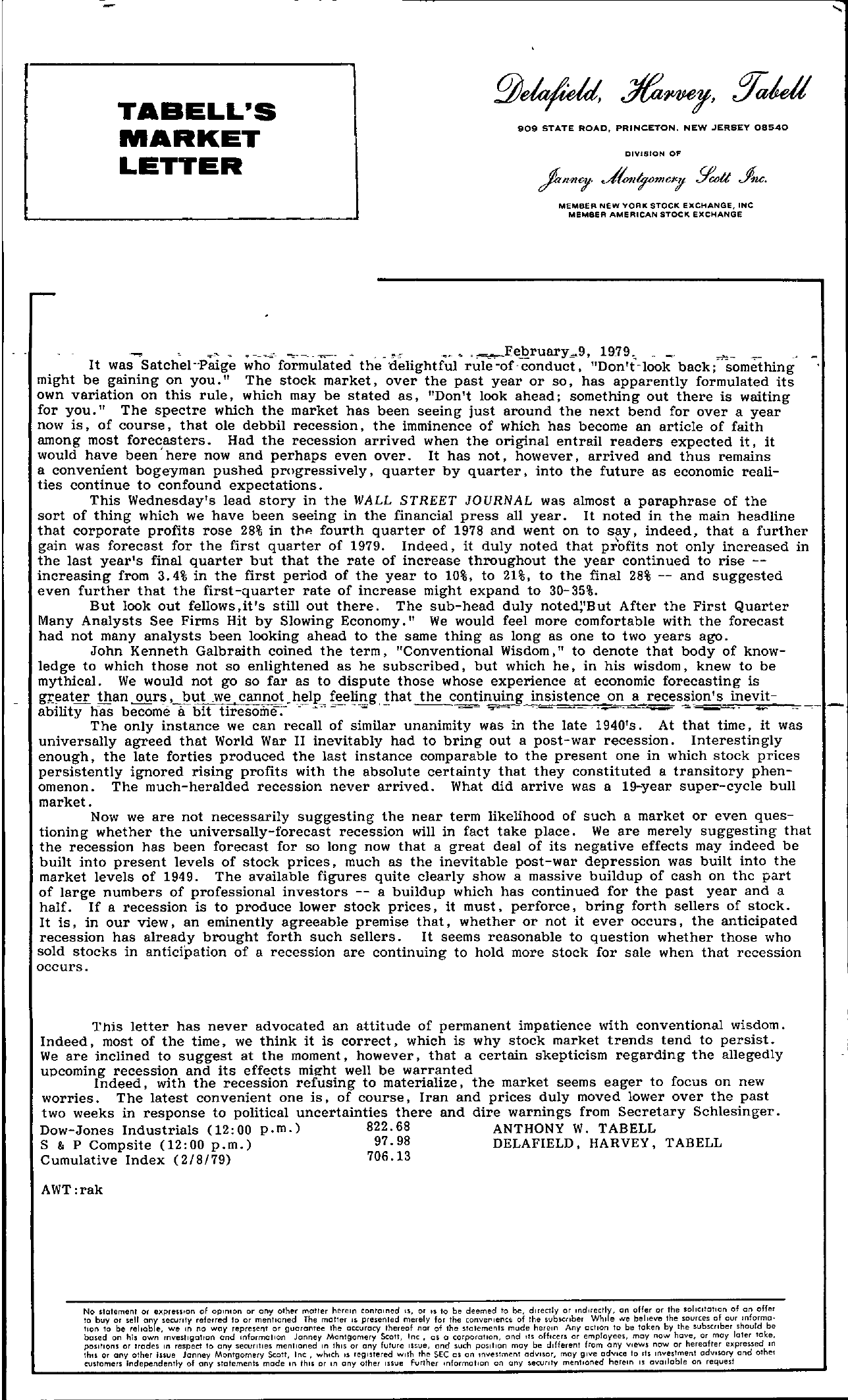 TABELL'S MARKET LETTER 909 STATE ROAD, PRINCETON. NEW JERSEY 08540 DIVISION OF MEMBER NEW VORK STOCK EXCHANGE, INC MEMBER AMERICAN STOCK eXCHANGE , ., . 19.79. It was SatchelPaige who formulated the 'delightful rule-of'conduct. Don't–look back;something might be gaining on you. The stock market. over the past year or so. has apparently formulated its own variation on this rule. which may be stated as. Don't look ahead; something out there is waiting for you. The spectre which the market has been seeing just around the next bend for over a year now is. of course. that ole debbil recession. the imminence of which has become an article of faith among most forec,asters. Had the recession arrived when the original entrail readers expected it. it would have been here now and perhaps even over. It has not. however. arrived and thus remains a convenient bogeyman pushed progressively. quarter by quarter. into the future as economic reali- ties continue to confound expectations. This Wednesday's lead story in the WALL STREET JOURNAL was almost a paraphrase of the sort of thing which we have been seeing in the financial press all year. It noted in the main headline that corporate profits rose 28 in thp. fourth quarter of 1978 and went on to say. indeed, that a further gain was forecast for the first quarter of 1979. Indeed, it duly noted that pr'ofits not only increased in the last year's final quarter but that the rate of increase throughout the year continued to rise — increasing from 3.4 in the first period of the year to 10. to 21, to the final 28 — and suggested even further that the first-quarter rate of increase might expand to 30-35. But look out fellows.it's still out there. The sub-head duly noted;'But After the First Quarter Many Analysts See Firms Hit by Slowing Economy. We would feel more comfortable with the forecast had not many analysts been looking ahead to the same thing as long as one to two years ago. John Kenneth Galbraith coined the term. Conventional Wisdom. to denote that body of know- ledge to which those not so enlightened as he subscribed. but which he. in his wisdom, knew to be mythical. We would not go so far as to dispute those whose experience at economic forecasting is g,eater than .Q!!rs hfllp !hat ability nas become il bit tiresomEr;' …. – – — insistence on a — ..-.. – inevit- The only instance we can recall of similar unanimity was in the late 1940's. At that time, it was universally agreed that World War II inevitably had to bring out a post-war recession. Interestingly enough. the late forties produced the last instance comparable to the present one in which stock prices persistently ignored rising profits with the absolute certainty that they constituted a transitory phen- omenon. The much-heralded recession never arrived. What did arrive was a 19-year super-cycle bull market. Now we are not necessarily suggesting the near term likelihood of such a market or even ques- tioning whether the universally-forecast recession will in fact take place. We are merely suggesting that the recession has been forecast for so long now that a great deal of its negative effects may indeed be built into present levels of stock prices. much as the inevitable post-war depression was built into the market levels of 1949. The available figures quite clearly show a massive buildup of cash on thc part of large numbers of professional investors — a buildup which has continued for the past year and a half. If a recession is to produce lower stock prices, it must, perforce. bring forth sellers of stock. It is. in our view. an eminently agreeable premise that, whether or not it ever occurs, the anticipated recession has already brought forth such sellers. It seems reasonable to question whether those who sold stocks in anticipation of a recession are continuing to hold more stock for sale when that recession occurs. T his letter has never advocated an attitude of permanent impatience with conventional wisdom. Indeed. most of the time, we think it is correct, which is why stock market trends tend to persist. We are inclined to suggest at the moment. however. that a certain skepticism regarding the allegedly upcoming recession and its effects milrht well be warranted Indeed. with the recession refusing to materialize. the market seems eager to focus on new worries. The latest convenient one is. of course. Iran and prices duly moved lower over the past two weeks in response to political uncertainties there and dire warnings from Secretary Schlesinger. Dow-Jones Industrials (1200 p.m.) 822.68 ANTHONY W. TABELL S & P Compsite (1200 p.m.) 97.98 DELAFIELD. HARVEY, TABELL Cumulative Index (2/8/79) 706.13 AWTrak No stalement or expreSSion of opinion or any olner motter hercln contolned 1, or IS 10 be deemed to be, d,redly or md,rectlr,' on oHer or Ihe sol,cltotlon of an offer to buy or sell onr, security referred 10 or mentioned The motler IS presented merely for the convef'1lenCE of the subSCriber Wh, e we believe the sources of our informa- tion to be fel,ab e, we In no way represent or guarantee Ihe accuracy Ihereof nor of Ihe statements mode herein Any ocllon to be token by the subscriber should be based on hls own Investlgollon and Information Janney Montgomery SCali, Inc, as a corporation, and .ts officers or employees, may now have, or may later toke, positions or trades In respect to any securities menlloned In thiS or any future Issue, and such position may be different from any views now or hereofter expressed .n Ihn or any other Issue Janney Montgomery Scott, Inc, which IS registered With the SEC as an mvestment odv,sor, may give odvlce to .ts Investment adVISOry and olhe. rostomers Independently of any statements made ,n thiS or .n any other ISSue Further information on ony security mentioned herein IS available on request