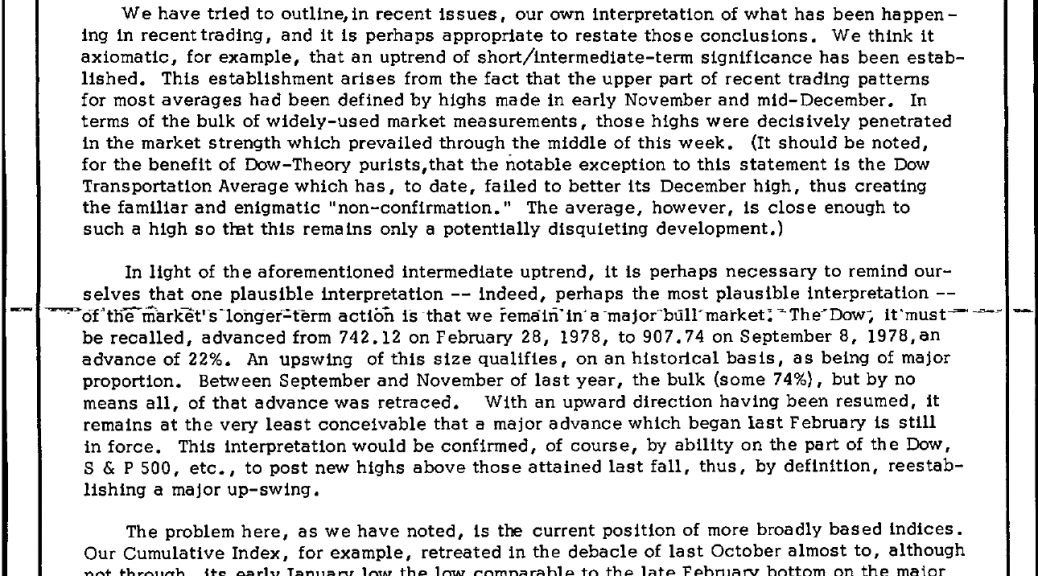 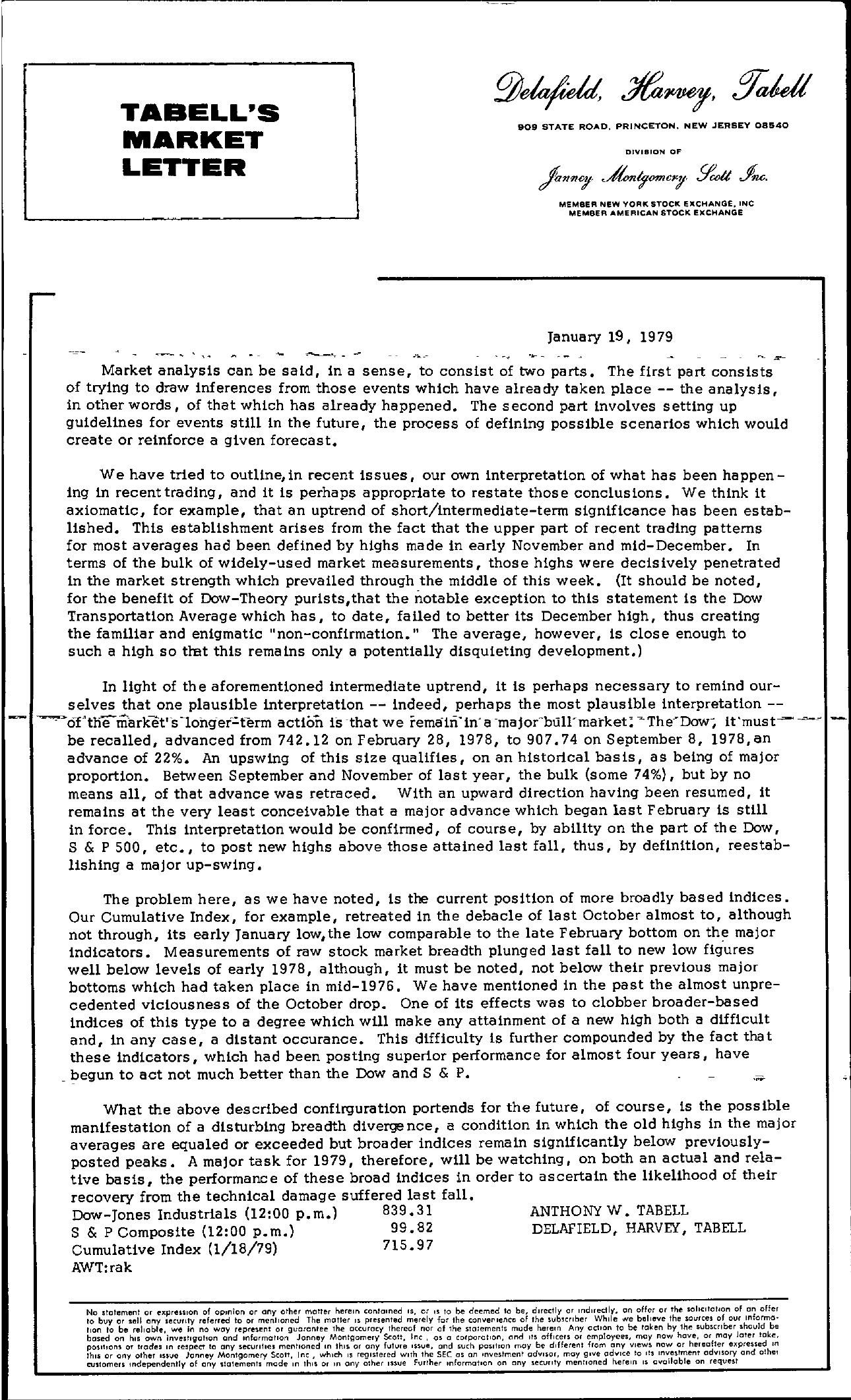 TABELL'S MARKET LETTER 909 STATE ROAD, PRINCETON. NEW JERSEY 08540 DIVI810N OF MEMBER NEW VORK STOCK EXCHANGE, INC MEMBER AMERICAN STOCK EXCHANGE – January 19, 1979 Market analysis can be said, in a sense, to consist of two parts. The first part consists of trying to draw inferences from those events which have already taken place — the analysis, in other words, of that which has already happened. The second part involves setting up guidelines for events still in the future, the process of defining possible scenarios which would create or reinforce a given forecast. We have tried to outline, in recent issues, our own interpretation of what has been happening in recenttrading, and it is perhaps appropriate to restate those conclusions. We think it axiomatic, for example, that an uptrend of short/intermediate-term significance has been established. This establishment arises from the fact that the upper part of recent trading patterns for most averages had been defined by highs made in early November and mid-December. In terms of the bulk of widely-used market measurements, those highs were decisively penetrated in the market strength which prevailed through the middle of this week. (It should be noted, for the benefit of Dow-Theory purists, that the notable exception to this statement is the Dow Transportation Average which has, to date, failed to better its December high, thus creating the familiar and enigmatic non-confirmation. The average, however, is close enough to such a high so that this remains only a potentially disquieting development.) In light of the aforementioned intermediate uptrend, it is perhaps necessary to remind ourselves that one plausible interpretation — indeed, perhaps the most plausible interpretation — action is that we remain' in a major-bull-market; be recalled, advanced from 742.12 on February 28,1978, to 907.74 on September 8, 1978,an advance of 22. An upswing of this size qualifies, on an historical basis, as being of major proportion. Between September and November of last year, the bulk (some 74), but by no means all, of that advance was retraced. With an upward direction having been resumed, it remains at the very least conceivable that a major advance which began last February is still in force. This interpretation would be confirmed, of course, by ability on the part of the Dow, S & P 500, etc., to post new highs above those attained last fall, thus, by definition, reestablishing a major up-swing. The problem here, as we have noted, is the current position of more broadly based indices. Our Cumulative Index, for example, retreated in the debacle of last October almost to, although not through, its early January low, the low comparable to the late February bottom on the major indicators. Measurements of raw stock market breadth plunged last fall to new low figures well below levels of early 1978, although, it must be noted, not below their previous major bottoms which had taken place in mid-1976. We have mentioned in the past the almost unprecedented viciousness of the October drop. One of its effects was to clobber broader-based indices of this type to a degree which will make any attainment of a new high both a difficult and, in any case, a distant occurance. This difficulty is further compounded by the fact that these indicators, which had been posting superior performance for almost four years, have begun to act not much better than the Dow and S & P. What the above described confirguration portends for the future, of course, is the possible manifestation of a disturbing breadth divergence, a condition in which the old highs in the major averages are equaled or exceeded but broader indices remain significantly below previously- posted peaks. A major task for 1979, therefore, will be watching, on both an actual and rela- tive basis, the performance of these broad indices in order to ascertain the likelihood of their recovery from the technical damage suffered last fall. Dow-Jones Industrials (1200 p.m.) 839.31 S & P Composite (1200 p. m.) 99.82 ANTHONY W. TABELL DELAFIELD, HARVEY, TAB ELL Cumulative Index (1/18/79) 715.97 AWTrak No statement or expreulon of opinion or cny other molter herein contolned IS, or IS to be deemed 10 be, directly or indirectly. on offer or the sol,Cltot.on of an offer to buy or sell any secvrlty referred to or mentioned The molter presented merely for the convef'lenCE of the subscriber While we believe the sources of our information to be reliable, we In no way represent or guarantee the accuracy thereof nor of the statements mude herein Any acllon to be token by the subscriber should be based on hiS own Investlgallon and information Janney Montgomery ScoH, Inc, 05 a corporation, and lIs officers or employees, may now have, or may Jaler toke, pOSlhons or Irades In respect 10 any securllies mentioned In thiS or any future Issue, ond such position may be different from any views now or hereafter expressed In thiS or ony other Ilue Janney Montgomery Scott, Inc. which IS registered With the SEC as an Inves/ment adVisor, may give adVice to Its Investment adVisory and othel C'Ustomers Independently of any statements mode III thiS or In any other Issue Further information on ony secuflty mentioned h.erem IS available on request