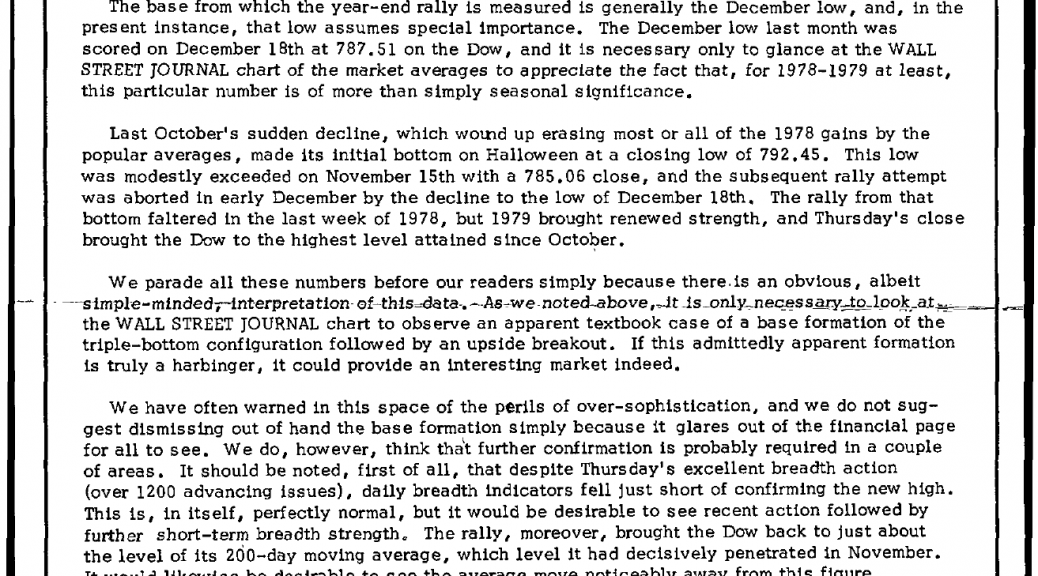 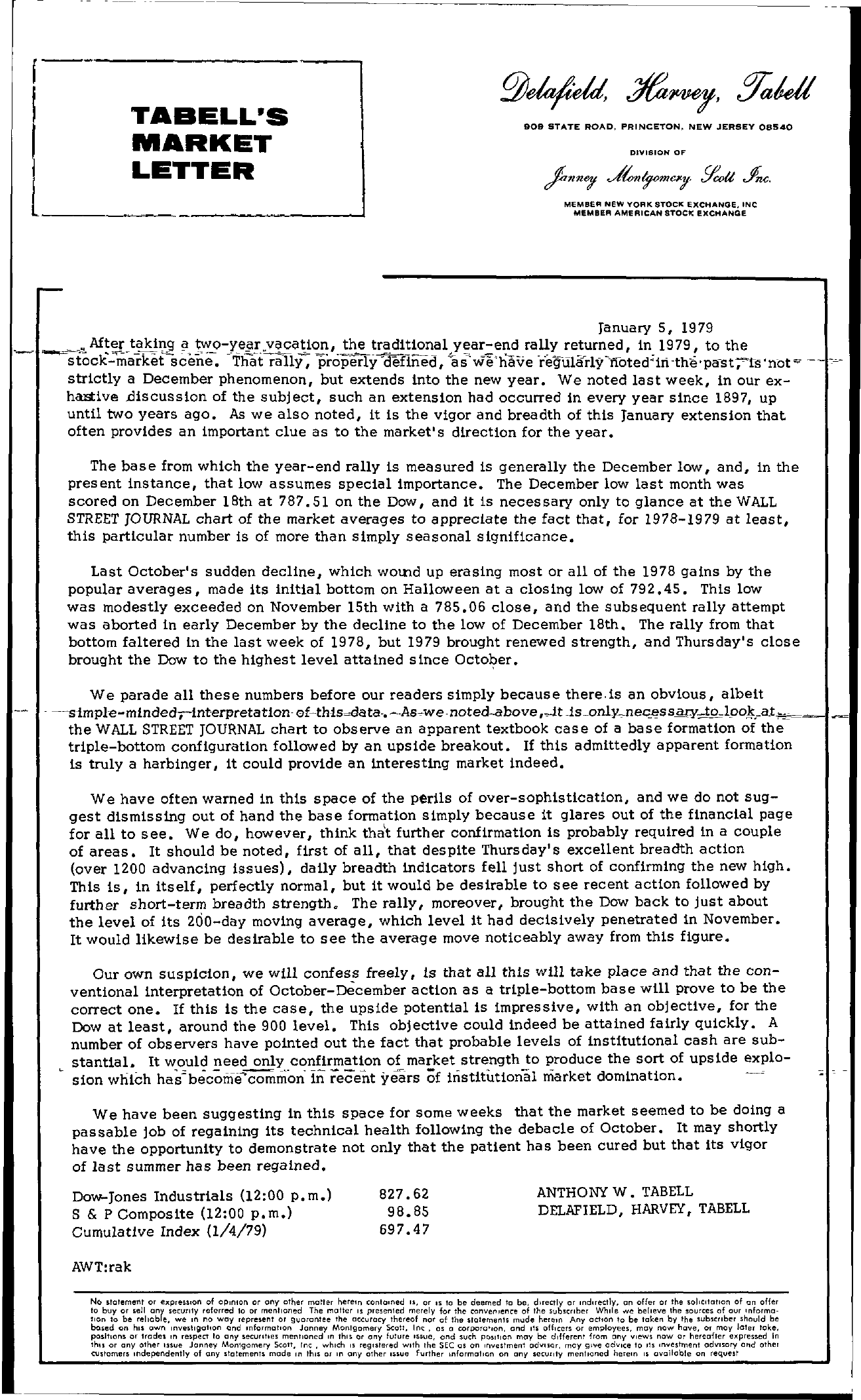 r– TABELL'S MARKET LETTER 909 STATE ROAD, PRINCETON, NEW JERSEY 08540 DIVISION OF MEMBER NEW YORK STOCK EXCHANGE, INC MEMBER AMERICAN STOCk eXCHANGE January 5, 1979 the in, 1979, to the stock-market scene. That rally, properly defined, as we have regularly -noted-In,the 'pa-st71s' not strictly a December phenomenon, but extends into the new year. We noted last week, in our ex- haslve -Illscussion of the subject, such an extension had occurred In every year since 1897, up until two years ago. As we also noted, it Is the vigor and breadth of this January extension that often provides an Important clue as to the market's direction for the year. — The base from which the year-end rally is measured is generally the December low, and, in the present instance, that low assumes special importance. The December low last month was scored on December 18th at 787.51 on the DOw, and it is neces sary only to glance at the WALL STREET JOURNAL chart of the market averages to appreciate the fact that, for 1978-1979 at least, this particular number is of more than simply seasonal significance. Last October's sudden decline, which wOUld up erasing most or all of the 1978 gains by the popular averages, made its initial bottom on Halloween at a closing low of 792.45. This low was modestly exceeded on November 15th with a 785.06 close, and the subsequent rally attempt was aborted in early December by the decline to the low of December 18th. The rally from that bottom faltered in the last week of 1978, but 1979 brought renewed strength, and Thursday's close brought the Dow to the highest level attained since October. We parade all these numbers before our readers simply because there. Is an obvious, albeit – —simpl-e-minded,interpretation- –As-we -noted-above ,.,.it the WALL STREET JOURNAL chart to observe an apparent textbook case of a base formation of the triple-bottom configuration followed by an upside breakout. If this admittedly apparent formation is truly a harbinger, it could provide an interesting market indeed. We have often warned in this space of the perils of over-sophistication, and we do not suggest dismissing out of hand the base formation Simply because it glares out of the financial page for all to see. We do, however, think tha't further confirmation is probably required in a couple of areas. It should be noted, first of all, that despite Thursday's excellent breadth action (over 1200 advancing issues), daily breadth indicators fell just short of confirming the new high. This is, in itself, perfectly normal, but it would be desirable to see recent action followed by further short-term breadth strength. The rally, moreover, brought the Dow back to Just about the level of its 200-day moving average, which level it had decisively penetrated in November. It would likewise be desirable to see the average move noticeably away from this figure. Our own suspicion, we will confess freely, Is that all this will take place and that the conventional interpretation of October-oecember action as a triple-bottom base will prove to be the correct one. If this is the case, the upside potential is impressive, with an objective, for the Dow at least, around the 900 level. This objective could indeed be attained fairly quickly. A number of observers have pointed out the fact that probable levels of institutional cash are substantial. It would need only confirmation of market strength to produce the sort of upside explosion wli1ch haftbecomii'Coillmon-ln recent years of institutional market domination. We have been suggesting in this space for some weeks that the market seemed to be dOing a pas sable job of regaining Its technical health following the debacle of October. It may shortly have the opportunity to demonstrate not only that the patient ha s been cured but that Its vigor of last summer has been regained. Dow-Jones Industrials (1200 p.m.) S & P Composite (1200 p. m.) Cumulative Index (1/4/79) 827.62 98.85 697.47 ANTHONY W. TABELL DELAFIELD, HARVEY, TABELL AWTrak No statement or expression of opinion or ony other molter here'n contolned IS, or IS 10 be deemed 10 be, dIrectly or indirectly, on offer or the soitcllotlon of an oHer to buy or sell any security referred 10 or mentioned The malter IS presented merely for the convenience of Ihe subscriber While we believe the sources of our Informa- tion 10 be relloble, we In no woy represent or guoronlee the occurocy thereof nor of the stotements mude herem Any actIOn to be token by the subSCriber should be based on hiS own Invesllgahon and information Janney Montgomery Scott, , as 0 corpora'Ion, and lIs offICers or employees, may now hove, or may 10ler toke, positions or trodes In respect 10 any securities mentioned In thiS or ony future Issue, cnd such POSITiOn may be different from any views now Or hereofter expressed In Ihls or ony other Issue Janney Montgomery ScoT!, Inc, which IS registered With the SEC os on Ifwestment adVisor, may give odl/lce to Its ,vestment adVisory ond other C\Jslomers Independently of ony stotemenTS mode In Ihls or In any other Issue Further mformallon on ony secunty menlloned herein IS ovolloble on request