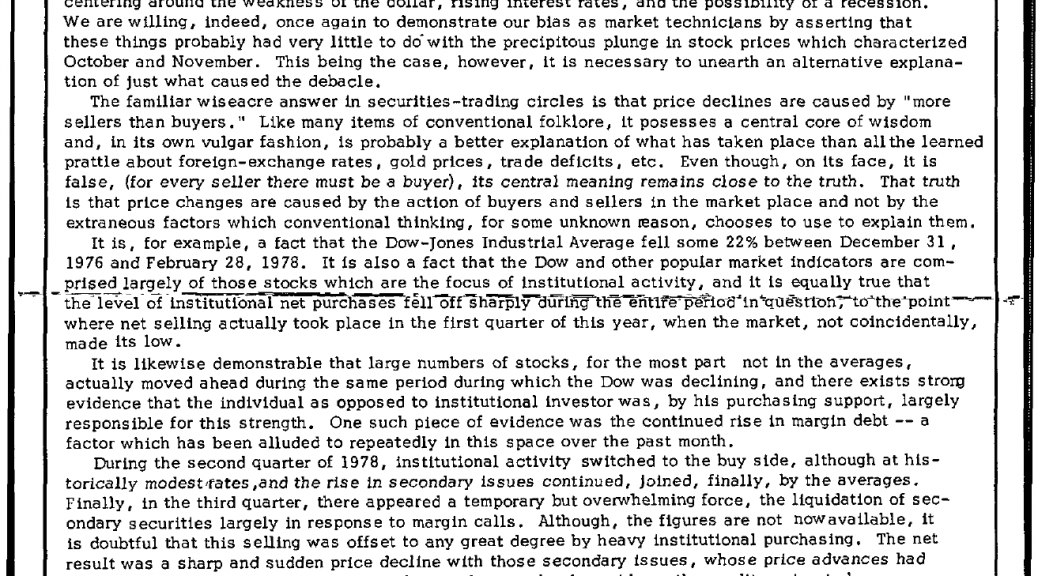 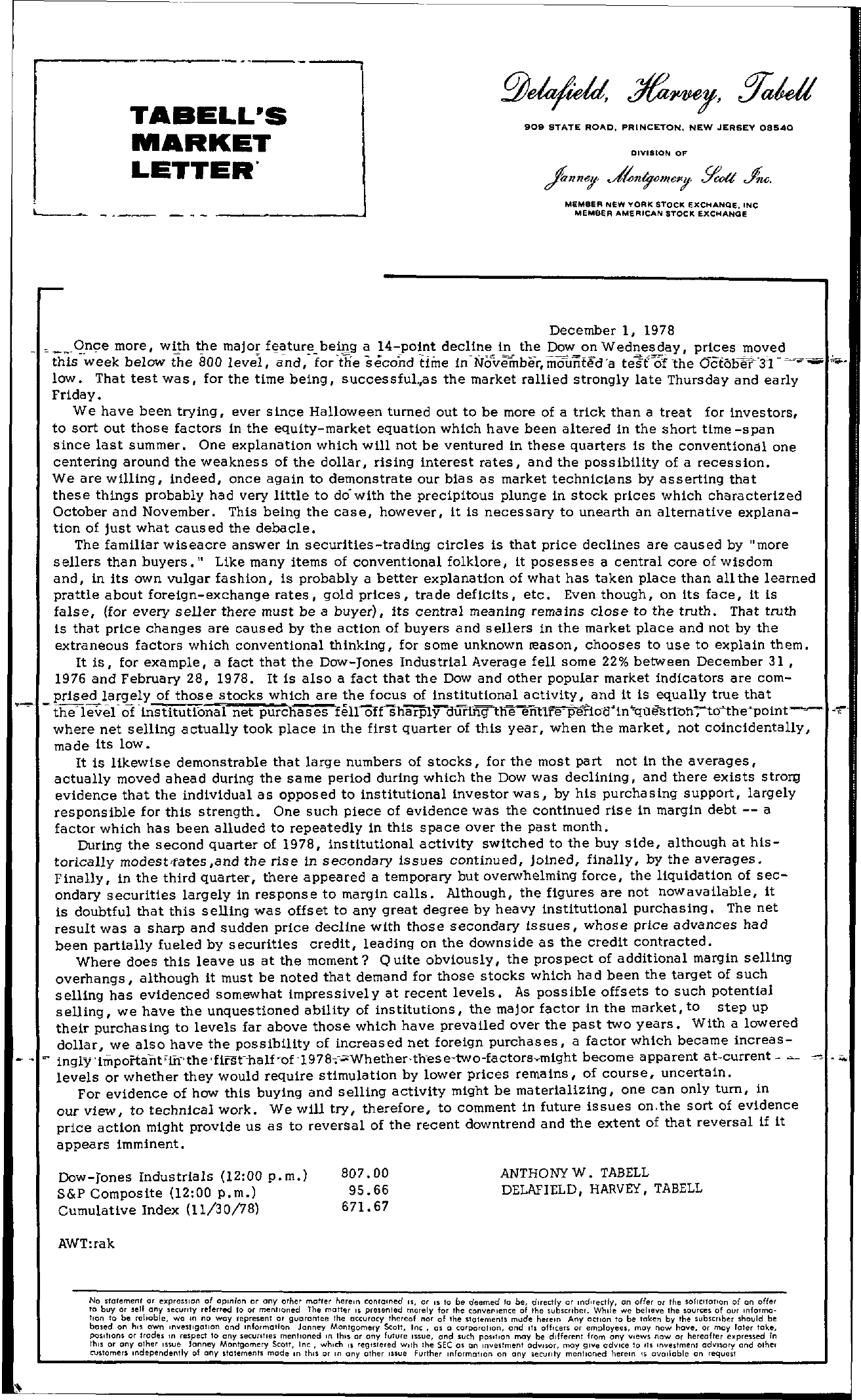 ,——————- ——————————————————————————–.- ,———-' …—-…, TABELL'S MARKET LETTER' .- . ———' 909 STATE ROAD, PRINCETON. NEW JERSEY 08540 DIVISION OF MEMBER NEW VORK STOCK eXCHANGE. INC MEMBER AMERICAN STOCK EXCHANGE December 1, 1978 c ,nce more, w!Jh the major faturebeillg a l4-polnt decline in the Dow on Wednesday, prices moved this week below the 800 level, a-nd,- for'tlle second tiine in-November, 'a te1e-6I the CfCtooe-r-'3l …… -. low. That test was, for the time being, successful.,as the market rallied strongly late Thursday and early Friday. We have been trying, ever since Halloween turned out to be more of a trick than a treat for investors, to sort out those factors in the equity-market equation which have been altered In the short time -span since last summer. One explanation which will not be ventured In these quarters is the conventional one centering around the weakness of the dollar, rising interest rates, and the possibility of a recession. We are willing, indeed, once again to demonstrate our bias as market technicians by asserting that these things probably had very little to do' with the precipitous plunge in stock prices which characterized October and November. This being the case, however, it is necessary to unearth an alternative explanation of just what caused the debacle. The familiar wiseacre answer in securities-trading circles Is that price declines are caused by more sellers than buyers. Like many items of conventional folklore, it posesses a central core of wisdom and, in Its own vulgar fashion, is probably a better explanation of what has taken place than all the learned prattle about foreign-exchange rates, gold prices, trade deficits, etc. Even though, on its face, it is false, (for every seller there must be a buyer), its central meaning remains close to the truth. That truth is that price changes are caused by the action of buyers and sellers in the market place and not by the extraneous factors which conventional thinking, for some unknown reason, chooses to use to explain them. It is, for example, a fact that the DOW-Jones Industrial Average fell some 22 between December 31, 1976 and February 28, 1978. It is also a fact that the Dow and other popular market indicators are com- -,-, prised largely of those stocks which are the focus of institutional activity, and it is equally true that – the' lever' Of 'institutional net purchases felloffsharplyauring me entIre' ..;-' where net selling actually took place in the first quarter of this year, when the market, not coincidentally, made its low. It is likewise demonstrable that large numbers of stocks, for the most part not in the averages, actually moved ahead during the same period during which the Dow was declining, and there exists strorg evidence that the individual as opposed to institutional investor was, by his purchasing support, largely responsible for this strength. One such piece of evidence was the continued rise in margin debt — a factor which has been alluded to repeatedly in this space over the past month. During the second quarter of 1978, institutional activity switched to the buy side, although at his- torically modest'fates,and the rise In secondary Issues continued, joined, finally, by the averages. Finally, in the third quarter, there appeared a temporary but overwhelming force, the liquidation of secondary securities largely in response to margin calls. Although, the figures are not nowavailable, it is doubtful that this selling was offset to any great degree by heavy institutional purchasing. The net result was a sharp and sudden price decline with those secondary issues, whose price advances had been partially fueled by securities credit, leading on the downside as the credit contracted. Where does this leave us at the moment Quite obviously, the prospect of additional margin selling overhangs, although It must be noted that demand for those stocks which had been the target of such selling has evidenced somewhat Impressivel y at recent levels. As possible offsets to such potential selling, we have the unquestioned ability of institutions, the major factor in the market, to step up their purchasing to levels far above those which have prevailed over the past two years. With a lowered dollar, we also have the possibility of increased net foreign purchases, a factor which became increas- – – – ingly 'impoftant'tif'the become apparent at-current – -…. levels or whether they would require stimulation by lower prices remains, of course, uncertain. For evidence of how this buying and selling activity might be materializing, one can only tum, in our view, to technical work. We will try, therefore, to comment in future issues on.the sort of evidence price action might provide us as to reversal of the recent downtrend and the extent of that reversal if it appears imminent. Dow-Tones Industrials (1200 p.m.) S&P Composite (1200 P. m.) Cumulative Index (11/30/78) 807.00 95.66 671. 67 ANTHONY W. TABELL DELAFIELD, HARVEY, TABELL AWTrak No statement Qf expression of opinion or any other motter herein contained IS, or 15 to be oeemed to be, directly or ,nd.rectly, on offer or the soliCitation of on offer to buy or sell any seCl,mty referred 10 or mentioned The molter IS presented merely for the onverlence of Ihe subSCriber. Whole we believe the sources of our .nforma tlon to be reliable, we In no way represent or guorantee the accuracy thereof nor of the statements mude hereon Any action to be token by the subSCriber should be bosed on hiS own mvestlgatlon ond information Janney Montgomery Scolf, Inc, os a corporat.on, and lis officers or employees, may now have, or may laler toke, positions or trades In respect to any securities menlloned .n th.s or any future Issue, and such POSlt.on may be ddferent from any views now or hereafter In thiS or any other Issue Janney Montgomery Sc01l, Inc, which 1 registered w,th the SEC as on Investment adVisor, may give adVICe to lIs Investment advlory and olhel Clslomer Independently of any statements mode m Ih,s or In ony other ,nue further informatIOn on any ecuTity mentioned herein IS aVailable on request