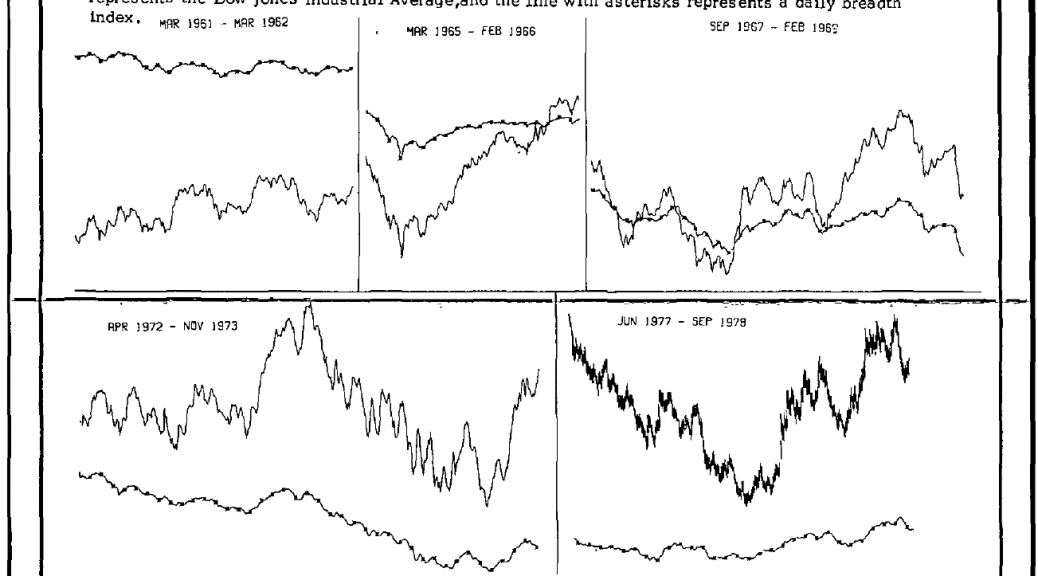 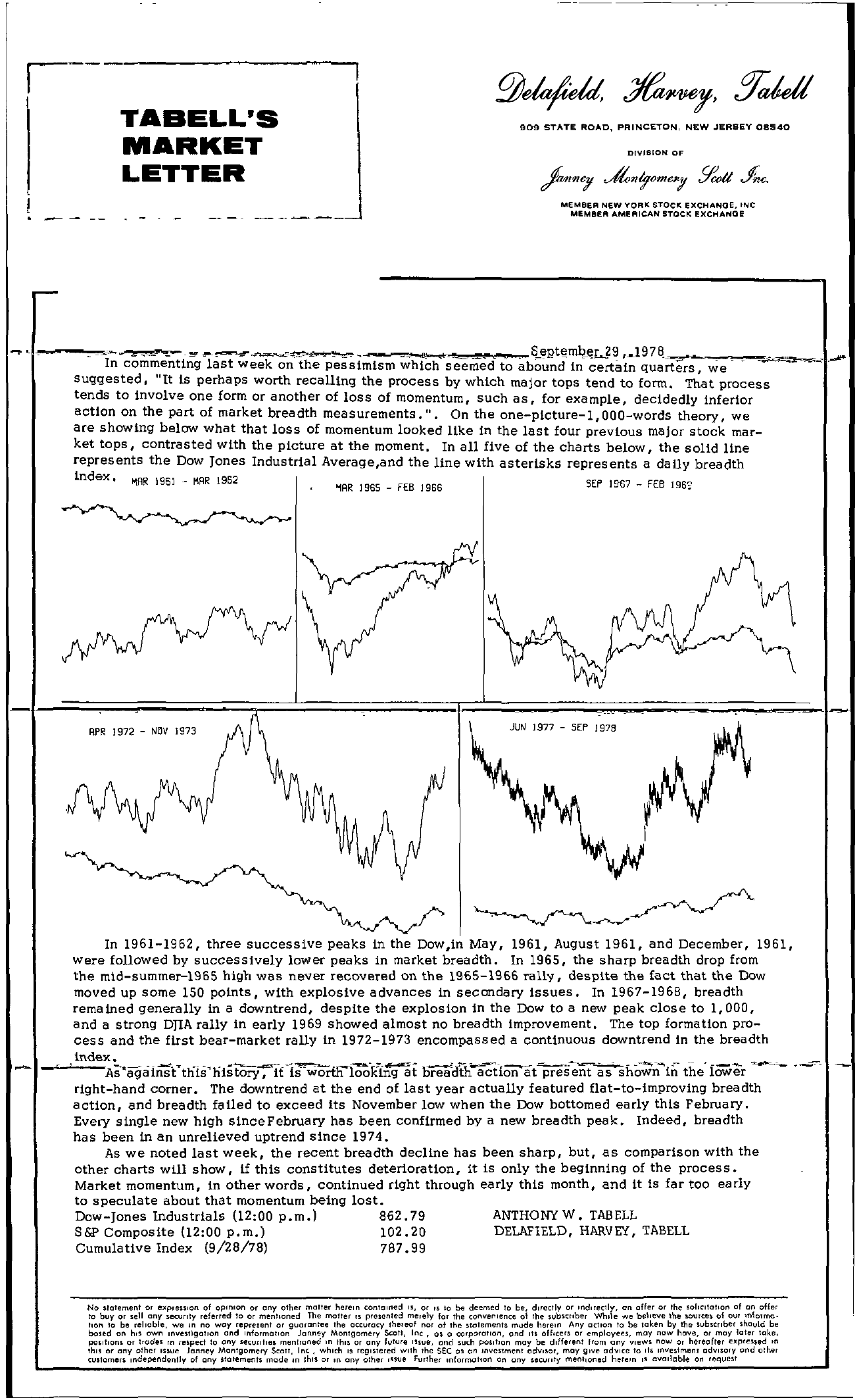 TABELL'S MARKET LETTER — — –.— 909 STATE ROAD, PRINCETON, NEW DIVISION OF 08540 MeMBER NEW YORK STOCK eXCHANOE, INC MEMBER AMERICAN STOCK eXCHANGE .. '!…. '- !rno!, In commenting last week on the pessimism which seemed to abound In certain quarters we – suggested, It is perhaps worth recalling the process by which major tops tend to form. That process tends to Involve one form or another of loss of momentum, such as, for example, decidedly Inferior action on the part of market breadth measurements.. On the one-picture-I, OOO-words theory, we are showing below what that loss of momentum looked like in the last four previous major stock mar- ket tops, contrasted with the picture at the moment. In all five of the charts below, the solid line represents the Dow Jones Industrial Average,and the line with asterisks represents a dally breadth Index. 1961 – MAR 1962 1965 – FEB 966 SEP ISS7 – FEB ISSS – JUN 1977 – SEP 1978 In 1961-1962, three successive peaks in the Dow,in May, 1961, August 1961, and December, 1961, were followed by successively lower peaks In market breadth. In 1965, the sharp breadth drop from the mid-summer-1965 high was never recovered on the 1965-1966 rally, despite the fact that the Dow moved up some 150 pOints, with explosive advances in secondary issues. In 1967-1968, breadth remained generally in a downtrend, despite the explosion In the Dow to a new peak close to 1,000, and a strong DJIA rally in early 1969 Showed almost no breadth improvement. The top formation pro- – cess and the first bear-market rally in 1972-1973 encompassed a continuous downtrend in the breadth …- …. …… ….. – – . As'against thls'hlstory. if is-worth looking at breadth action at present as shown in the lower right-hand comer. The downtrend at the end of last year actually featured flat-to-improvlng breadth action, and breadth falled to exceed Its November low when the Dow bottomed early this February. Every single new high since February has been confirmed by a new breadth peak. Indeed, breadth has been in an unrelieved uptrend Since 1974. As we noted last week, the recent breadth decline has been sharp, but, as comparison with the other charts will show, if this constitutes deterioration, it is only the beginning of the process. Market momentum, in other words, continued right through early this month, and it is far too early to speculate about that momentum being lost. Dow-Jones Industrials (1200 p.m.) 862.79 ANTHONY W TABELL SSP Composite (1200 p.m.) 102.20 DELAFIELD, HARVEY, TABELL Cumulative Index (9/28/78) 787.99 No statement or expreSlon of opinion or ony other motter herein conlollled 15, or .510 be deemed to be, directly or Indirectly, em offer or the 5011(1101101'1 of on offer to buy or sell any securlly referred 10 or mentioned The matter IS presented merely for the convel'lenaJ 01 the subSCriber While we believe the OUIteS of OUI tlon to be rei roble, we m no way represent or guarantee the accuracy theleQf nor of the statements mude herein Any action to be taken by Ihe subscriber should be based on hiS own Investigation and Information Janney Montgomery Scali, Inc, as a corporation, and Its officers or employees, moy now have, or may later take, pOSitions or trades In respect 10 any seCUrities menlloned In thiS or any fvlure Issue, and such posItion may be different from any views now or hereafter expressed to thiS or any other Issue Janney Montgomery SeoIT. Inc, which IS registered With the SEC as on Investment odvlsor, moy give adVice to Its Investmenl adVisory ond othel customers Independently of any tOlements mode In Ihls or In any other iSsve Funher information on any secullty mentioned herein is available on request