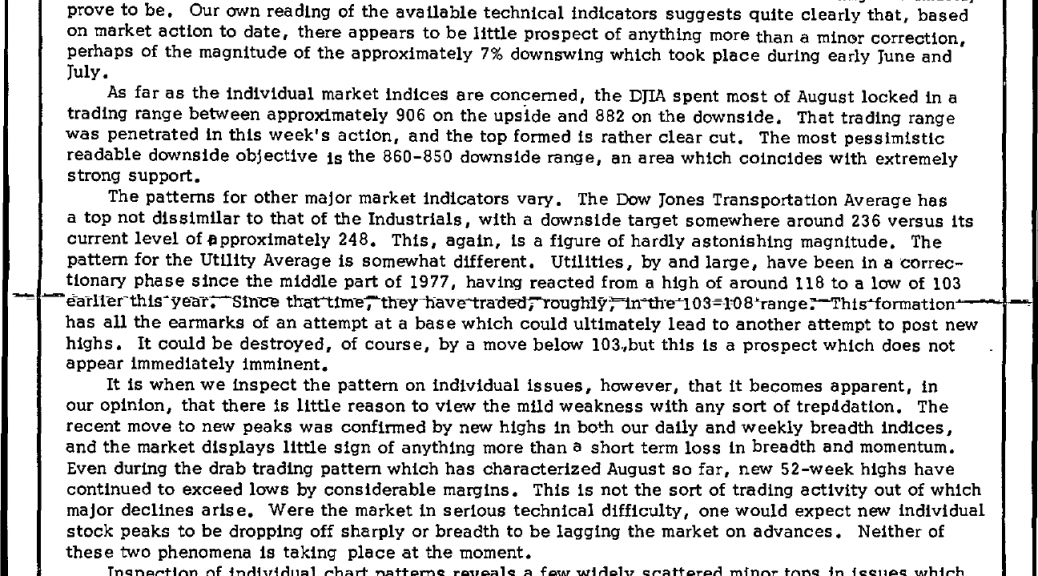 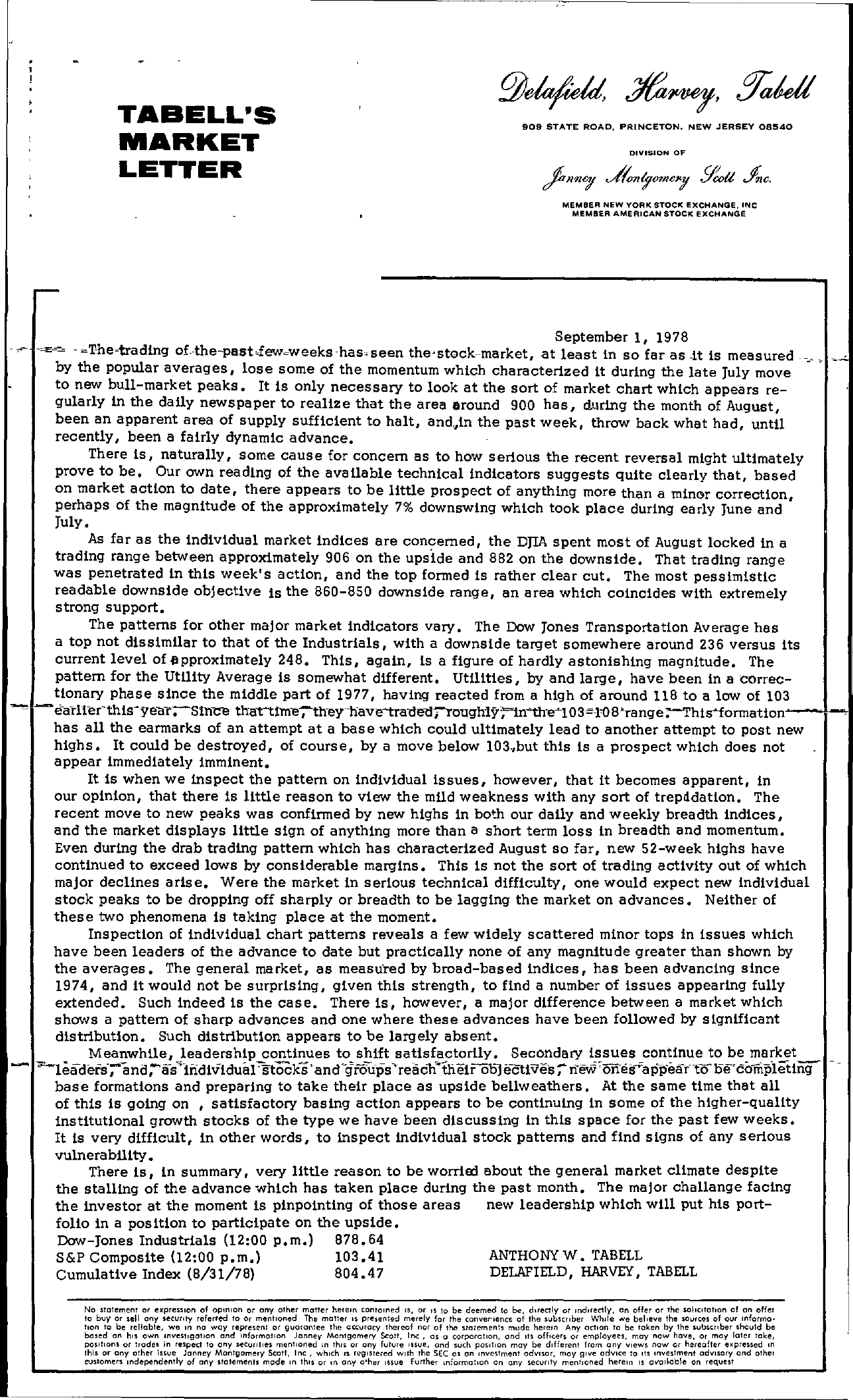 TABELL'S MARKET LETTER 909 STATE ROAD, PRINCETON. NEW JERSEY 08540 DIVISION OF MEMBER NEW VORK STOCK EXCHA.NGE, INC MEMBER AMERICAN STOCK eXCHANGE – – September I, 1978 the-steck-market, at least in so far as -it is measured by the popular averages, lose some of the momentum which characterized it during the late July move to new bull-market peaks. It is only necessary to look at the sort of market chart which appears re- gularly in the daily newspaper to realize that the area around 900 has, during the month of August, been an apparent area of supply sufficient to halt, andin the past week, throw back what had, until recently, been a fairly dynamic adVance. There is, naturally, some cause for concern as to how serious the recent reversal might ultimately prove to be. Our own reading of the available technical indicators suggests quite clearly that, based on market action to date, there appears to be little prospect of anything more than a min!)r correction, perhaps of the magnitude of the approximately 7 downswing which took place during early June and July. As far as the individual market indices are concerned, the DJIA spent most of August locked in a trading range between approximately 906 on the upside and 882 on the downside. That trading range was penetrated in this week's action, and the top formed is rather clear cut. The most pessimistic readable downside objective is the 860-850 downside range, an area which COincides with extremely strong support. The patterns for other major market indicators vary. The Dow Jones Transportation Average has a top not dissimilar to that of the Industrials, with a downside target somewhere around 236 versus its current level 248. This, again, is a figure of hardly astonishing magnitude. The pattern for the Utility Average is somewhat different. Utilities, by and large, have been in a correc- tlonary phase since the middle part of 1977, having reacted from a high of around 118 to a low of 103 — – earller-this-yeaY-. 03;1'0 8'range-Thisiormation'–..J has all the earmarks of an attempt at a bas e which could ultimately lead to another attempt to post new highs. It could be destroyed, of course, by a move below 103but this is a prospect which does not appear immediately imminent. It is when we Inspect the pattern on individual issues, however, that it becomes apparent, in our opinion, that there is little reason to view the mild weakness with any sort of trepddation. The recent move to new peaks was confirmed by new highs in both our daily and weekly breadth indices, and the market displays little sign of anything more than a short term loss in breadth and momentum. Even during the drab trading pattern which has characterized August so far, new 52-week highs have continued to exceed lows by considerable margins. This is not the sort of trading activity out of which major declines arise. Were the market in serious technical difficulty, one would expect new individual stock peaks to be dropping off sharply or breadth to be lagging the market on advances. Neither of these two phenomena is taking place at the moment. Inspection of individual chart patterns reveals a few widely scattered minor tops in issues which have been leaders of the advance to date but practically none of any magnitude greater than shown by the averages. The general market, as measu'red by broad-based indices, has been advancing since 1974, and it would not be surprising, given this strength, to find a number of issues appearing fully extended. Such indeed is the case. There is, however, a major difference between a market which shows a pattern of sharp advances and one where these advances have been followed by Significant distribution. Such distribution appears to be largely absent. Meanwhile, leadership continues to shift satisfactorily. Secondary issues continue to be market – '-leaders;-1md;'as-ifidividualStocKs' 'readh-theiro15 ectti/ell; ne.n;oneHfapP'eano l5e'comji'teting base formations and preparing to take their place as upside bellweathers. At the same time that all of this is going on , satisfactory basing action appears to be continuing in some of the higher-quality institutional growth stocks of the type we have been discussing in this space for the past few weeks. It is very difficult, in other words, to inspect Individual stock patterns and find signs of any serious vulnerability There is, in summary, very little reason to be worrie! about the general market climate despite the stalling of the advance which has taken place during the past month. The major challange facing the Investor at the moment is pinpOinting of those areas new leadership which w11l put his port- folio in a pOSition to participate on the upside. Dow-Jones Industrials (1200 p.m.) 878.64 S&P CompOSite (1200 p.m.) 103.41 Cumulative index (8/31/78) 804.47 ANTHONY W. TABELL DELAFIELD, HARVEY, TABELL No statemenT or expression of opinion or any olher motter herem contOlned IS, or 1 10 be deemed to be, d.rectly or mdHectly, on offer or the sollcltoloon of on offer to buy or sell any seclUity referred to or mentioned The mOiler IS presented merely for the converlena of the subscnber While Ne believe the Ources of our Informa tlon to be reliable, we In no way represent or guarantee the aCCuracy thereof nor of the staemen!s mude herem Any action to be token by the subSCriber shOUld be based on hiS own Invesllgatlon and Information Janney Montgomery Seo!t, Inc, as a corporatIOn, and Its officers or employees, may now have, or may loter loke, POSitiOns or trodes In respect to any seCUrities mentioned In thiS or ony future Issue, and such pOSitIOn moy be different from any views now or hereafter expressed In Ihls or ony other Issue Janney Montgomery Scoll, tnc, which IS registered With the SEC as an Investment adVisor, may give adVice to lIS Investment odvisory ond othel customers Independently of any stalements mode In thiS or In ony o'her Issue Further informatIOn on cny security mentioned herein IS aVailable on request