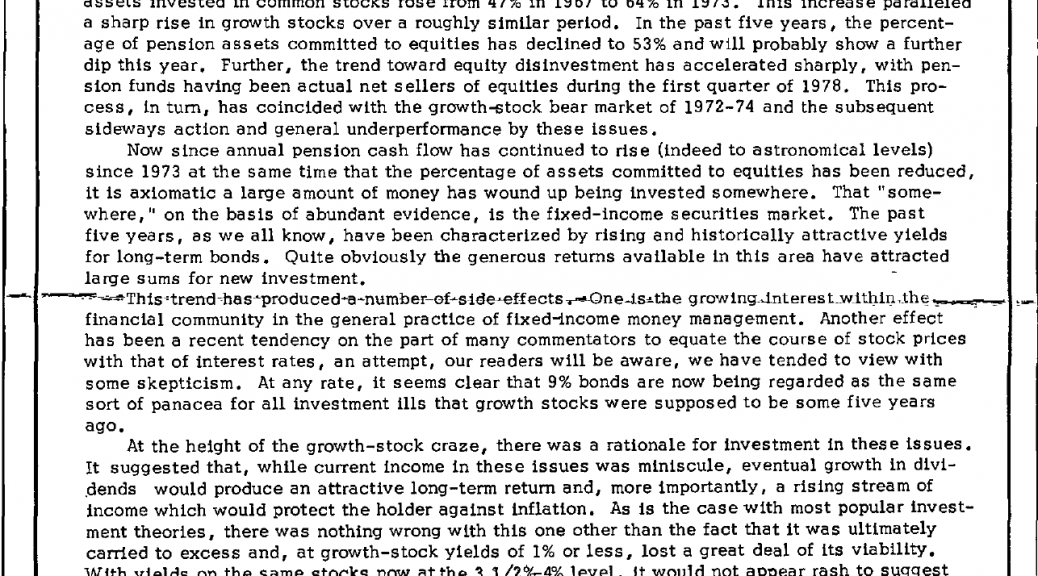 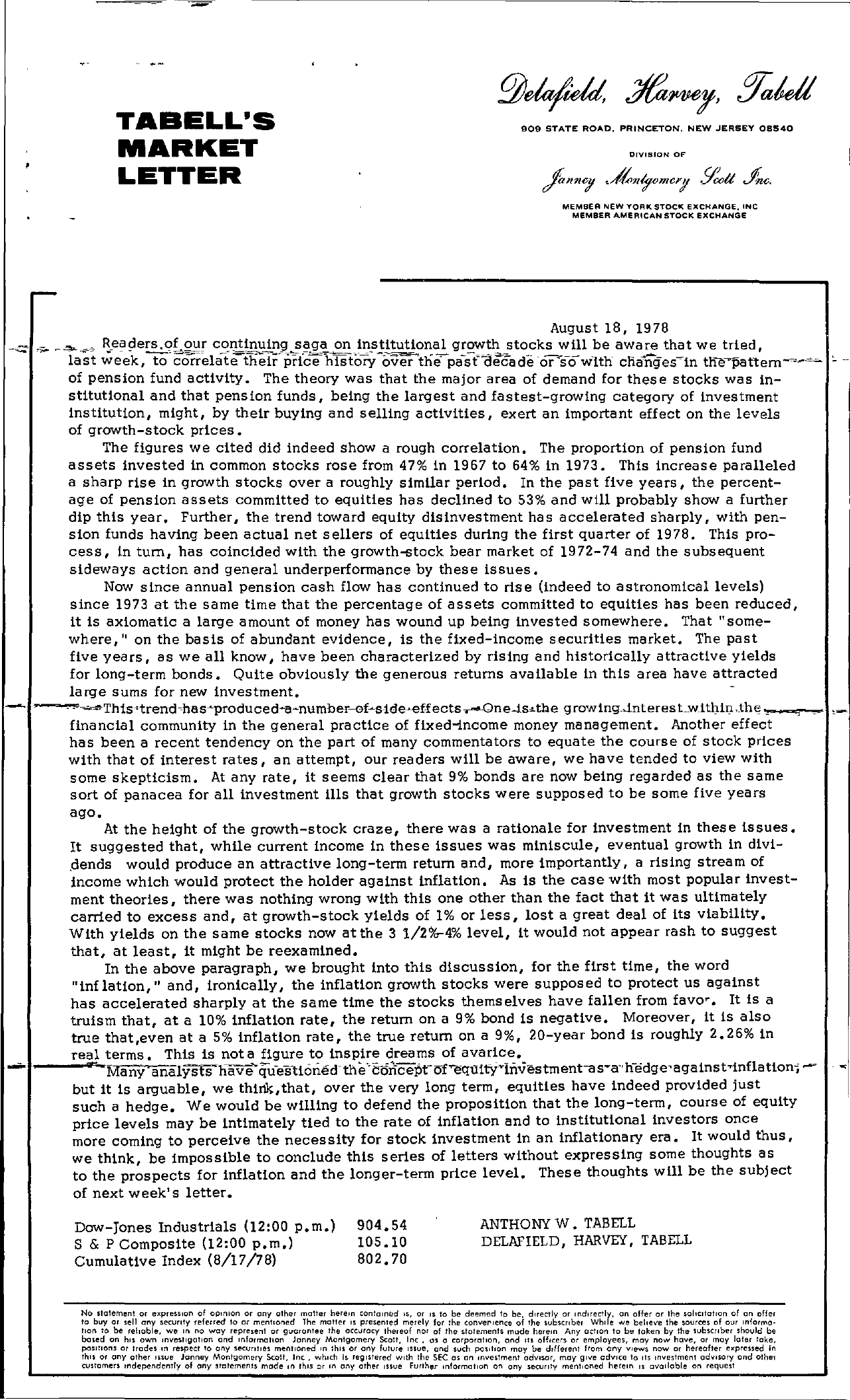 ';0;;;0 TABELL'S MARKET LETTER 909 STATE RO….D, PRINCETON. NEW JERSEY 08540 DIVISION OF MEMBER NEW YORK STOCK EXCHANGE, INC MEMBER AMERICAN STOCK eXCHANGE August 18, 1978 ' stocks will be aware that we tried, last week, to correlate their price'history over the pa'sflecadeor's'Q'wlth of penSion fund activity. The theory was that the major area of demand for these stocks was in- stitutional and that penSion funds, being the largest and fastest-growing category of investment institution, might, by their buying and selling activities, exert an important effect on the levels of growth-stock prices. The figures we cited did indeed show a rough correlation. The proportion of pension fund assets invested in common stocks rose from 47 in 1967 to 64 in 1973. This increase paralleled a sharp rise in growth stocks over a roughly similar period. In the past five years, the percent- age of pension assets committed to equities has declined to 53 and will probably show a further dip this year. Further, the trend toward equity disinvestment has accelerated sharply, with pen- sion funds having been actual net sellers of equities during the first quarter of 1978. This pro- cess, in turn, has coincided with the growth-stock bear market of 1972-74 and the subsequent sideways action and general underperformance by these issues. Now since annual pension cash flow has continued to rise (indeed to astronomical levels) since 1973 at the same time that the percentage of assets committed to equities has been reduced, it is axiomatic a large amount of money has wound up being invested somewhere. That some- where, on the basis of abundant evidence, is the fixed-income securities market. The past five years, as we all know, have been characterized by riSing and historically attractive yields for long-term bonds. Quite obviously the generous returns available in this area have attracted large sums for new investment. growing.-1nteresLwitltil,l,th.,.. …,.I, financial community in the general practice of fixed-lncome money management. Another effect has been a recent tendency on the part of many commentators to equate the course of stock prices with that of interest rates, an attempt, our readers will be aware, we have tended to view with some skepticism. At any rate, it seems clear that 9 bonds are now being regarded as the same sort of panacea for all investment ills that growth stocks were supposed to be some five years ago. At the height of the growth-stock craze, there was a rationale for investment in these issues. It suggested that, while current income in these issues was miniscule, eventual growth in divi- .dends would produce an attractive long-term return and, more importantly, a rising stream of income which would protect the holder against inflation. As is the case with most popular invest- ment theories, there was nothing wrong with this one other than the fact that it was ultimately carried to excess and, at growth-stock yields of 1 or less, lost a great deal of its viability. With yields on the same stocks now at the 3 1/20/.,-4 level, it would not appear rash to suggest that, at least, it might be reexamined. In the above paragraph, we brought into this diSCUSSion, for the first time, the word inf lation, and, ironically, the inflation growth stocks were supposed to protect us against has accelerated sharply at the same time the stocks themselves have fallen from favor. It Is a truism that, at a 10 inflation rate, the return on a 9 bond is negative. Moreover, it Is also true that,even at a 5 inflation rate, the true return on a 9, 20-year bond is roughly 2.26 in real terms. This Is not a figure to inspire dreams of avarice ….. ,—-''-liMany analysts have but it is arguable, we think,that, over the very long term, equities have Indeed provided just such a hedge. We would be willing to defend the proposition that the long-term, course of equity price levels may be Intimately tied to the rate of inflation and to institutional investors once more coming to perceive the necessity for stock investment in an inflationary era. It would thus, we think, be Impossible to conclude this series of letters without expressing some thoughts as to the prospects for inflation and the longer-term price level. These thoughts will be the subject of next week's letter. Dow-Jones Industrials (1200 p.m.) S & P Composite (1200 p. m.l Cumulative Index (8/17/78) 904.54 105.10 802.70 ANTHONY W TABELL DELAFIELD, HARVEY, TABELL No statement or e)(presslon of opinion or ony other molter herem contained IS, or 15 to be deemed to be, directly or mdlrec1Ir,' an offer or the sol,c,totlon of on offer to buy or sell any security referred to or mentioned The matter IS presented merely for the converlena. of the subscriber Whl e we bellevlI the sources of our information to be relioble, we In no woy represent or guorontee the occurocy thereof nor of the statements mode herem Any aC1lOn to be token by the subscriber should be based on hiS own investigation and InfOrmalion Janney Montgomery Scan, Inc, us a corporation, and Its offICers or employees, may now have, or may later toke, positions or trodes In respect to any seCUrities mentioned In thiS or any future Issue, and such pOSItion may be different from any vIews naw or hereafter expressed In thiS or any other Issue Janney Montgomery Scali, Inc, which Is registered With the SEC as on mllestment adVIsor, may give adVice to Its Investment odYl5ory ond othel customers Independently of any stotemenls mode In thiS r In any other Issue Further information on any security mentioned herein IS ovadoble on request