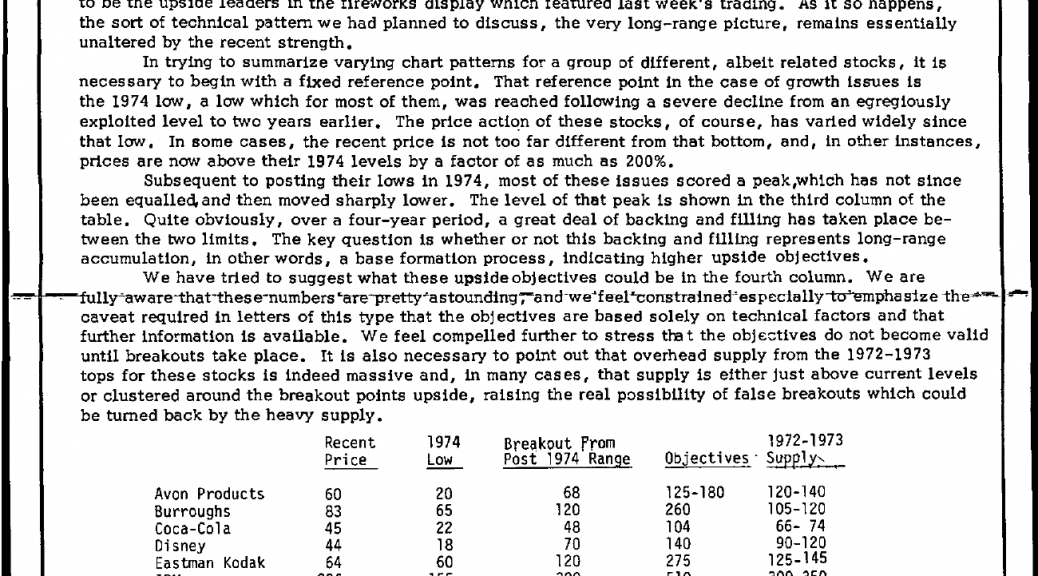 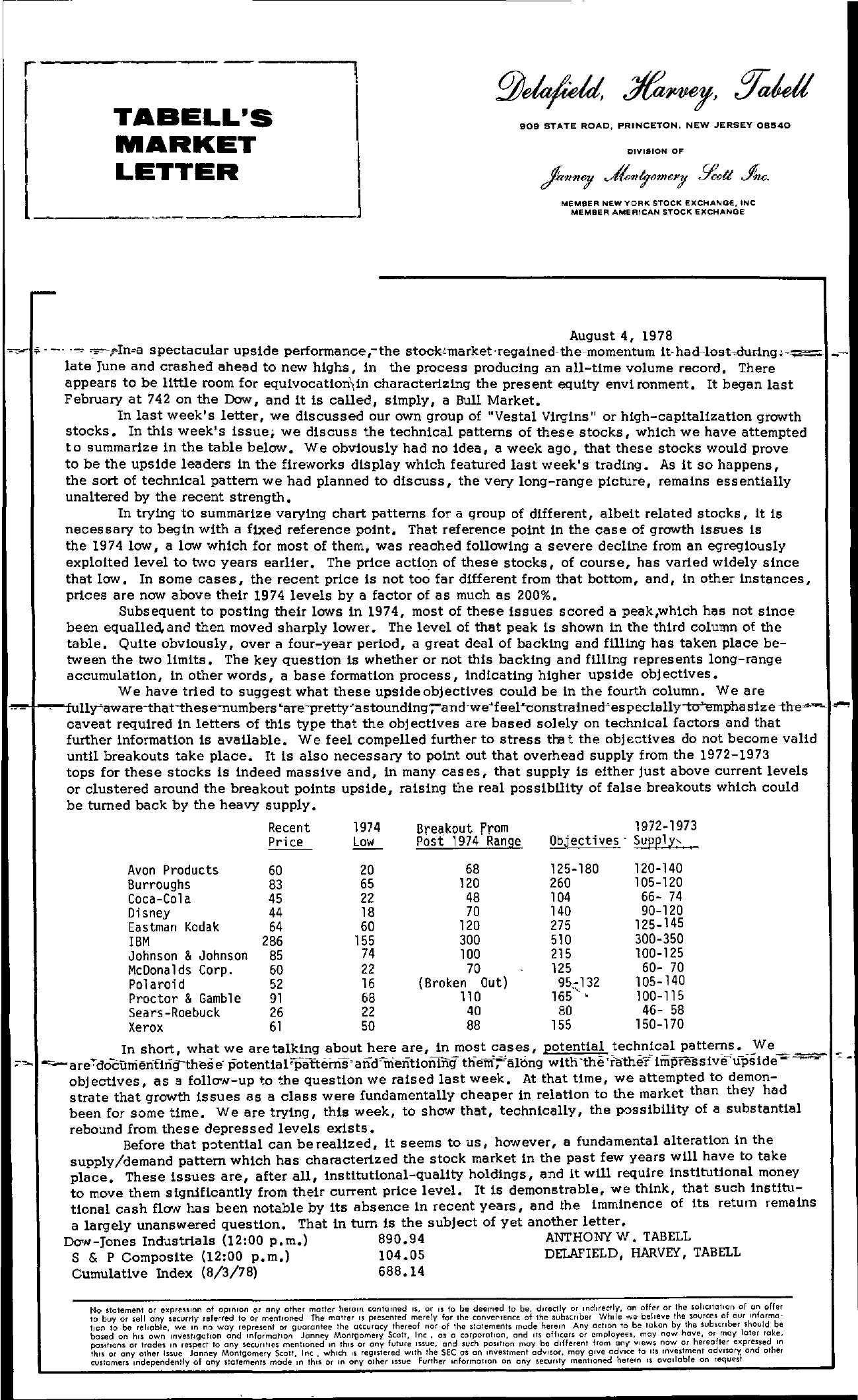 r —- I TABELL'S MARKET LETTER ' I 909 STATE ROAD, PRINCETON. NEW JERSEY 08!540 DIVISION OF MEMBER NEW YORK STOCK EXCHANGE, INC MEMBER AMERICAN STOCK EXCHANGe – — spectacular upside performance,-the August 4, 1978 , late June and crashed ahead to new highs, In the process producing an all-time volume record. There appears to be little room for equivocation\ln characterizing the present equity envi ronment, It began last February at 742 on the Dow, and it is called, simply, a Bull Market. In last week's letter, we discussed our own group of Vestal Virgins or high-capitalization growth stocks. In this week's Issue; we discuss the technical patterns of these stocks, which we have attempted to summarize in the table below. We obviously had no idea, a week ago, that these stocks would prove to be the upside leaders In the fir.,-,orks display which featured last week's trading. As It so happens, the sort of technical pattern we had planned to discuss, the very long-range picture, remains essentially unaltered by the recent strength. In trying to summarize varying chart patterns for a group of different, albeit related stocks, It Is necessary to begin with a fixed reference point. That reference point In the case of growth Issues Is the 1974 low, a low which for most of them, was reached following a severe decline from an egregiously exploited level to two years earlier. The price action of these stocks, of course, has varied widely since that low, In some cases, the recent price Is not too far different from that bottom, and, In other Instances, prices are now above their 1974 levels by a factor of as much as 200, Subsequent to posting their lows In 1974, most of these Issues scored a peak,which has not since been equalled, and then moved sharply lower. The level of that peak Is shown in the third column of the table. Quite obviously, over a four-year period, a great deal of backing and filling has taken place be- tween the two limits. The key question is whether or not this backing and filling represents long-range accumulation, In other words, a base formation process, Indicating higher upside objectives. We have tried to suggest what these upside objectives could be in the fourth column. We are are-pretty'astounding,;and-we'fe-el'constrafnedespecially-nnrrnphasfze caveat required in letters of this type that the obj ectlves are based solely on technical factors and that further information is available. We feel compelled further to stress that the objEctives do not become valid until breakouts take place. It is also necessary to point out that overhead supply from the 1972-1973 tops for these stocks is Indeed massive and, In many cases, that supply Is either just above current levels or clustered around the breakout points upside, raising the real posslb!1ity of false breakouts which could be turned back by the heavy supply. Recent Price 1974 from 1972-1973 Low Post 1974 Range Objectives – Supply, — Avon Products Burroughs Coca-Cola Disney Eastman Kodak IBM Johnson &Johnson McDona1ds Corp. Pol aroi d Proctor &Gamble Sears -Roebuck Xerox 60 83 45 44 64 286 85 60 52 91 26 61 20 68 125-180 120-140 65 120 260 105-120 22 48 104 66- 74 18 70 140 90-120 60 120 275 125-145 155 300 510 300-350 74 100 215 100-125 22 70 125 60- 70 16 (Broken Out) 95-132 105-140 68 110 165-' 100-115 22 40 80 46- 58 50 88 155 150-170 '-are In short, what we are talking about here are, In most cases, potential technical patterns. We p o t e n t i a l 'patterns' tnem;-albng wltli -the 'rathe– Impressivitu-pslde – objectives, as a follow-up to the question we raised last week. At that time, we attempted to demon- strate that growth Issues as a class were fundamentally cheaper In relation to the market than they had been for some time. We are trying, this week, to show that, technically, the possibility of a substantial reboand from these depressed levels exists. Before that potential can be realized, It seems to us, however, a fundamental alteration In the supply/demand pattern which has characterized the stock market In the past few years will have to take place. These Issues are, after all, Institutional-quality holdings, and It will require institutional money to move them Significantly from their current price level. It is demonstrable, we think, that such institutional cash flow has been notable by Its absence in recent years, and the imminence of Its return remains a largely unanswered question. That In tum Is the subject of yet another letter. Dow-Jones Industrials (l200 p.m.) 890.94 ANTHONYW. TABELL S & P Composite (l200 p.m.) 104.05 DELAFIELD, HARVEY, TABELL Cumulative Index (8/3/78) 688.14 No 510tement or expreulon of opinion or any other matter herlJln contained IS, or IS to be deemed to be, directly or Indirectly, on offer or the soliCitation of on offer to buy or sell any security referred to or mentIOned The matter IS presented merely for Ihe of the subscriber While '/'Ie believe the sources of our informa- tion to be relloble, we ,n no way represent or guarantee the accuracy thereof nor of the statements mude herein Any oellon to be tolcn by the subscriber should be based on hiS own Investlgollon and information Janney Montgomery SCali, Inc, as a corporation, and lIS offlclJrs or employees, may now have, or may leiter toke, pos.hons or trades In respect to any seCUrities menlloned In Ihls or any future Issue, and such POSition may be different from any views now or hereafter expressed In thiS or ony other Issue Jonney Montgomery Scotl, Inc, which '5 registered With the SEC as on Investment adVisor, moy give adVice to Its Investment odvlsol'Y, and othel customers ,ndependently of any statements mode In thiS or In any other Issue Funher mformatlon on any security mentioned herein IS aVailable on request