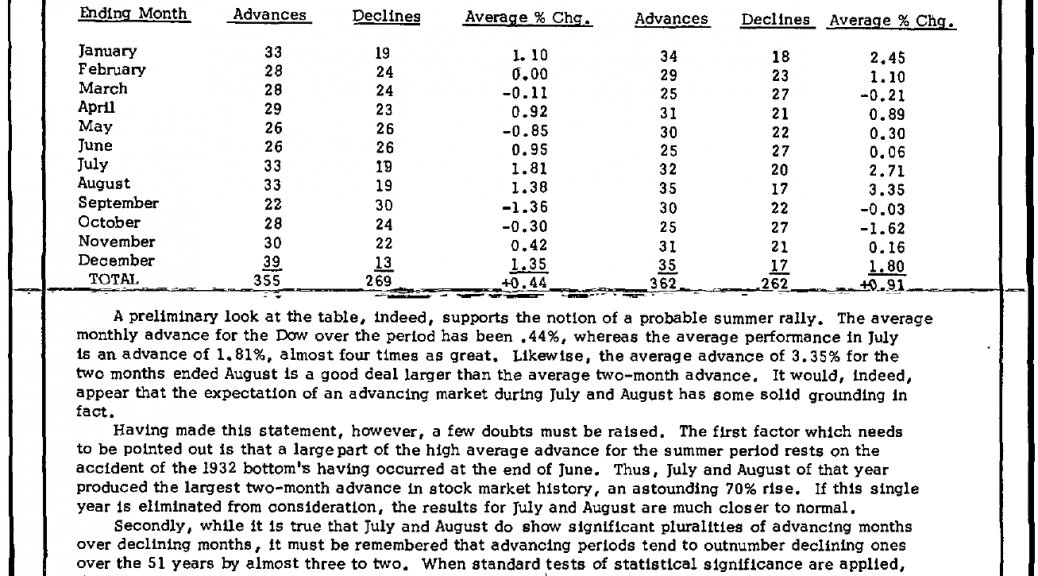 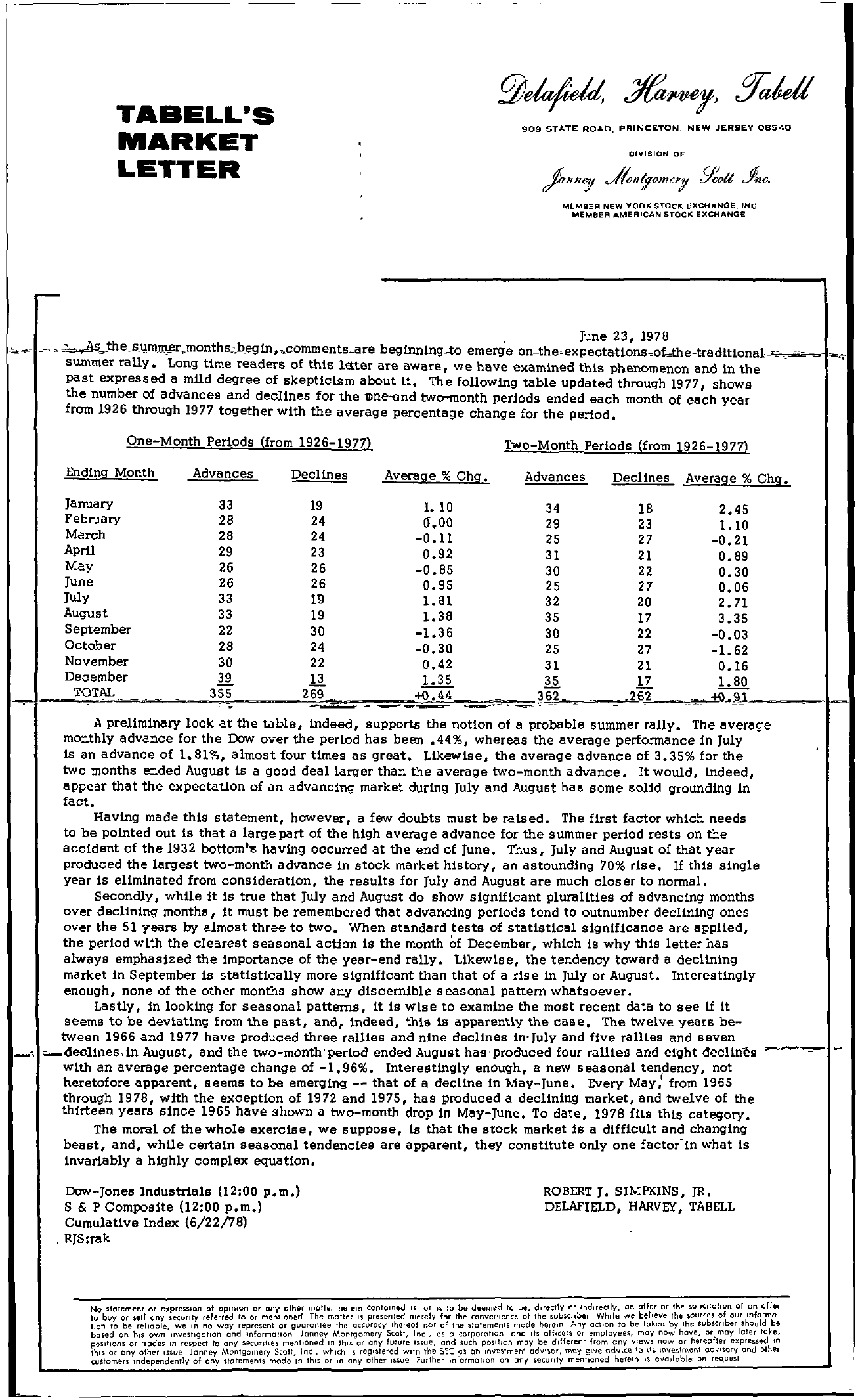 TABELL'S MARKET LETTER 909 STATE ROAD, PRINCETON, NEW JERSEY 08540 DIVISION OF MEMBER NEW YORK STOCK EXCHANGE, INC MEMBER AMERICAN STOCK eXCHANGE – – –., Asth e, st,l,m1!\!'r , ;comm entsare beginningto em erge June 23, 1978 expectat1ons,ofcAhe-tra summer rally. Long time readers of this letter are aware, we have examined this phenomenon and in the past expressed a mild degree of skepticism about It. The following table updated through 1977, shows the number of advances and declines for the llme-and two-month periods ended each month of each year from 1926 through 1977 together with the average percentage change for the period. ' One-Month Periods (from 1926-1977) Two-Month Periods (from 1926-1977) Ending Month Advances Declines Average Chq. Advances Declines Averaqe Chq. January February March April May June July August September October November December TOTAL 33 19 28 24 1. 10 a.oo 28 24 -0.11 29 23 0.92 26 26 -0.85 26 26 0.95 33 l'll 1.81 33 19 1.38 22 30 -1.36 28 24 -0.30 30 22 0.42 11. 1.35 355 269 0.44 -….5.-,. – 34 18 2.45 29 23 1.10 25 27 -0.21 31 21 0.89 30 22 0.30 25 27 0.06 32 20 2.71 35 17 3.35 30 22 -0.03 25 27 -1.62 31 21 0.16 II 11 1.80 362 262 ll,9,1 A preliminary look at the table, indeed, supports the notion of a probable summer rally. The average monthly advance for the Dow over the period has been .44, whereas the average performance in July is an advance of 1.81, almost four times as great. Likewise, the average advance of 3.35 for the two months ended August is a good deal larger than the average two-month advance. It would, Indeed, appear that the expectation of an advanCing market during July and August has some solid grounding in fact. Having made this statement, however, a few doubts must be raised. The first factor which needs to be pOinted out Is that a large part of the high average advance for the summer period rests on the accident of the 1932 bottom's having occurred at the end of June. Thus, July and August of that year produced the largest two-month advance in stock market history, an astounding 70 rise. If this single year is eliminated from consideration, the results for July and August are much clos er to normal. Secondly, while it is true that July and August do show significant pluralities of advancing months over declining months, It must be remembered that advancing periods tend to outnumber declining ones over the 51 years by almost three to two. When standard tests of statistical significance are applied, the period with the clearest seasonal action is the month of December, which Is why this letter has always emphasized the Importance of the year-end rally. Llkewlse, the tendency toward a declining market in September Is statistically more significant than that of a rise in July or August. Interestingly enough, none of the other months show any discernible seasonal pattern whatsoever. Lastly, In looking for seasonal patterns, it is Wise to examine the most recent data to see If It seems to be deviating from the past, and, indeed, this is apparently the case. The twelve years between 1966 and 1977 have produced three rallies and nine declines In' July and five rallies and seven -declines.in August, and the two-month'perlod ended August has 'produced four rallies'ana elght-deellnes——-'' with an average percentage change of -1.96. Interestingly enough, a new seasonal ten,dency, not heretofore apparent, seems to be emerging — that of a decline In May-June. Every May. from 1965 through 1978, with the exception of 1972 and 1975, has produced a declining market, and twelve of the thirteen years since 1965 have shown a two-month drop In May-June. To date, 1978 Uts this category. The moral of the whole exercise, we suppose, is that the stock market is a difficult and changing beast, and, while certain seasonal tendencies are apparent, they constitute only one factoiln what Is invariably a highly complex equation. Dow-Jones Industrials (1200 p.m.) S & P CompoSite (1200 p. m.) Cumulative Index (6/22/78) , RJSrak ROBERT J' SIMPKINS, JR. DELAFIELD, HARVEY, TABELL No stolement or e)(preSSton of opinion or cny other matter herein contolned IS, or IS to be deemed to be, directly or indirectly. an offer or Ihe soliCitation of on oHer to buy or sell any sec;urlly referred to or mentioned The motter IS presented merely for Ihe converlenCI; of Ihe subscnber While -Ne believe the sources of our Informo- han 10 be reliable we In no way represent or guarantee the ac,uracy thereof nor of the statements mode herein Any action to be token by The Substrlber should be based on hiS own 'lnvestlgotlon and Information Janney Montgomery Scott, Inc, as a corporation, and Its off.cers or employees, moy now have, or may loter POSitions or trades In respect to ony securtlles mentioned In thl or any future ISSue, and such pOSition may be different from ony views now or hereafter expressed In thiS or ony other Issue Janney Montgomery Scott, Inc, which IS registered With tne SEC as on Investment mo)' 9\\!C adVIce to ItS adYlsory and other customers Independently of any statements mode In thiS or In any 01 her Issue Further tnformotlon on any securrty mentioned nefeln IS ovorloble on request