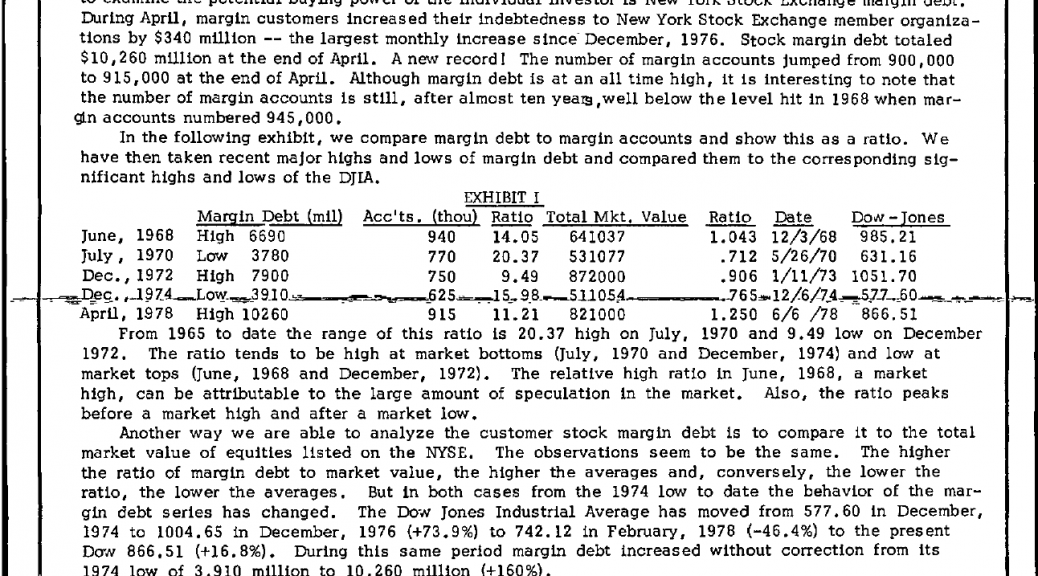 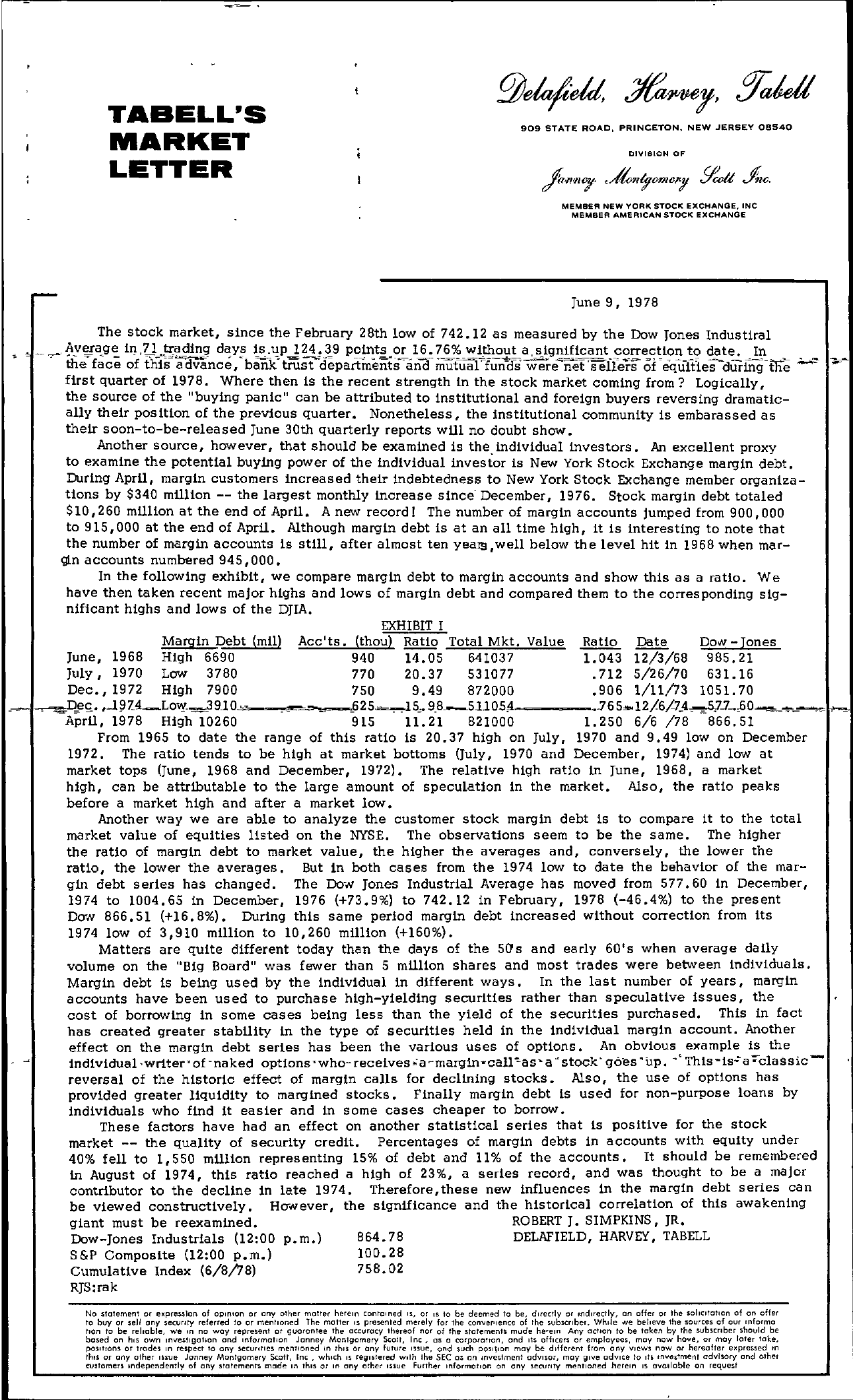 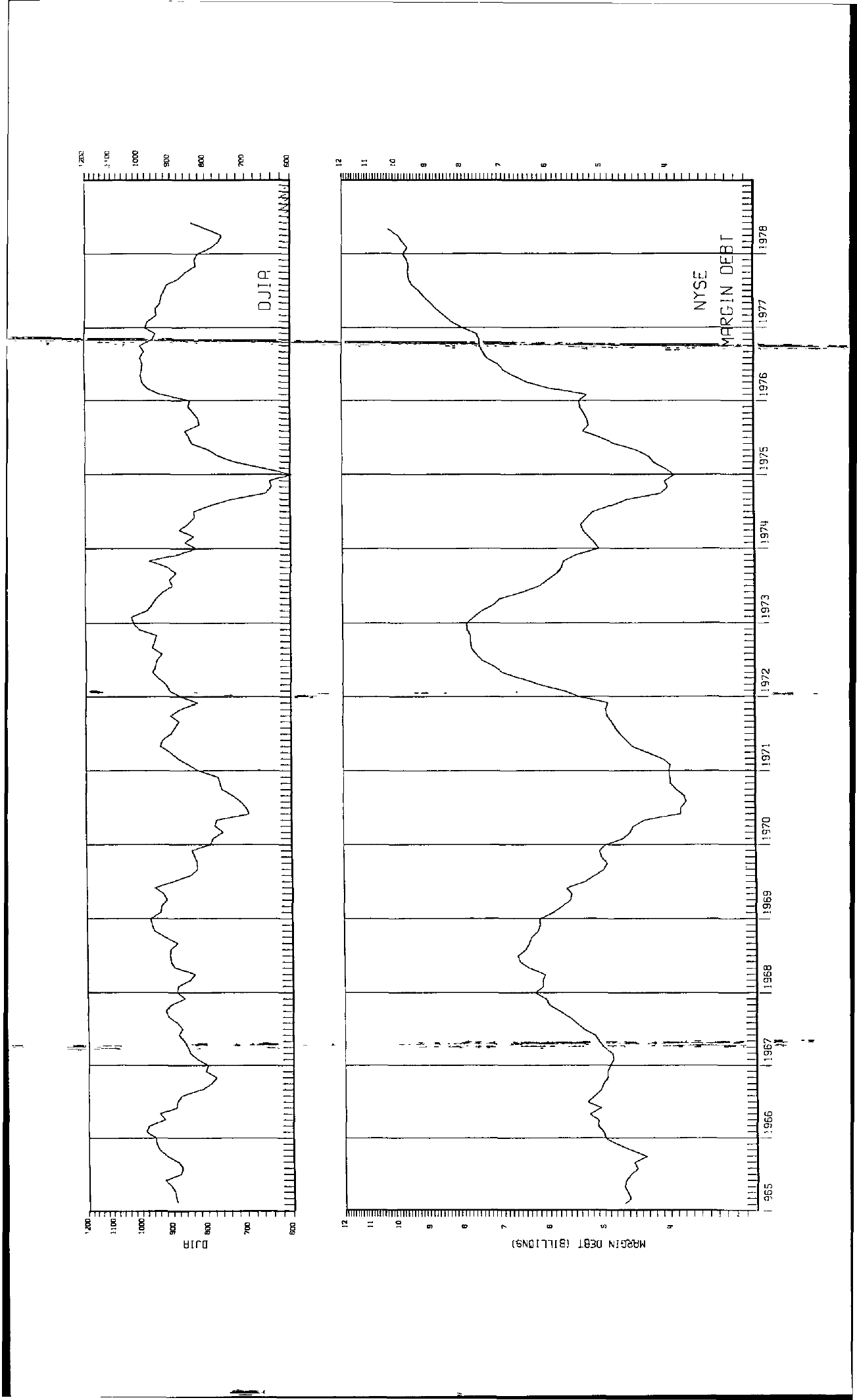 TABELL'S MARKET LETTER 909 STATE ROAD, PRINCETON. NEW JERSEY 08540 DIVISION OF MEMBER NEW VORK STOCK EXCHANGE, INC MEMBER AMERICAN STOCK EXCHANGE June 9, 1978 The stock market, since the February 28th low of 742.12 as measured by the Dow Jones Industiral AVerage in.D trading days is ,up 124.39 pOints or 16.76 without a significant correction to date. In , face of bank' trust ';'ere-net' sefiers first quarter of 1978. Where then is the recent strength in the stock market coming from Logically, the source of the buying panic can be attributed to institutional and foreign buyers reversing dramatic- ally their position of the previous quarter. Nonetheless, the institutional community is embarassed as their soon-to-be-released June 30th quarterly reports will no doubt show. Another source, however, that should be examined is the.1ndlvldual Investors. An excellent proxy to examine the potential buying power of the Individual investor is New York Stock Exchange margin debt. During April, margin customers Increased their indebtedness to New York Stock Exchange member organiza- tions by 340 million — the largest monthly Increase since' December, 1976. Stock margin debt totaled 10,260 million at the end of April. A new record I The number of margin accounts jumped from 900,000 to 915,000 at the end of April. Although margin debt Is at an all time high, it Is Interesting to note that the number of margin accounts is stHl, after almost ten yeaI!!,well below the level hit In 1968 when mar- gLn accounts numbered 945,000. In the following exhibit, we compare margin debt to margin accounts and show this as a ratio. We have then taken recent major highs and lows of margin debt and compared them to the corresponding sig- nificant highs and lows of the DJIA. EXHIBIT I Margin Debt (mil) Acc'ts. (thou) Ratio Total Mkt. Value Ratio Date Do….. – Jones June, 1968 High 6690 940 14.05 641037 1.043 12/3/68 985.21 July,1970 Low 3780 770 20.37 531077 .712 5/26/70 631.16 Dec.,1972 High 7900 , , 750 ,.. 9.49 872000 .9061/11/731051.70 .76512/6/74.,……5JJJiO'-…..– Aprll,1978 High 10260 915 11.21 821000 1.250 6/6 /78 -866.51 From 1965 to date the range of this ratio Is 20.37 high on July, 1970 and 9.49 low on December 1972. The ratio tends to be high at market bottoms (July, 1970 and December, 1974) and low at market tops (June, 1968 and December, 1972). The relative high ratio In June, 1968, a market high, can be attributable to the large amount of speculation in the market. Also, the ratio peaks before a market high and after a market low. Another way we are able to analyze the customer stock margin debt is to compare It to the total market value of equities listed on the NYSE. The observations seem to be the same. The higher the ratio of margin debt to market value, the higher the averages and, conversely, the lower the ratio, the lower the averages. But in both cases from the 1974 low to date the behavior of the mar- gin debt series has changed. The Dow Jones Industrial Average has moved from 577.60 in December, 1974 to 1004.65 in December, 1976 (73.9) to 742.12 in February, 1978 (-46.4) to the present Dow 866.51 (16.8). During this same period margin debt increased without correction from its 1974 low of 3,910 mlllion to 10,260 mlllion (160). Matters are quite different today than the days of the 5(1s and early 60's when average dally volume on the Big Board was fewer than 5 million shares and most trades were between Individuals. Margin debt is being used by the individual In different ways. In the last number of years, margin accounts have been used to purchase high-yielding securities rather than speculative issues, the cost of borrowing in some cases being less than the yield of the securities purchased. This in fact has created greater stability in the type of securities held in the Individual margin account. Another effect on the margin debt series has been the various uses of options. An obvious example Is the Individual ,writer' of'naked stock' g6es 'up .' This-is';-adassic- reversal of the historic effect of margin calls for declining stocks. Also, the use of options has provided greater liquidity to margined stocks. Finally margin debt Is used for non-purpose loans by individuals who find It easier and In some cases cheaper to borrow. These factors have had an effect on another statistical series that is positive for the stock market — the quality of security credit. Percentages of margin debts in accounts with equity under 40 fell to 1,550 million representing 15 of debt and 11 of the accounts. It should be remembered in August of 1974, this ratio reached a high of 23, a series record, and was thought to be a major contributor to the decline in late 1974. Therefore, these new influences in the margin debt series can be viewed constructively. However, the significance and the historical correlation of this awakening giant must be reexamined. ROBERT J. SIMPKINS, JR. DoW-Jones Industrials (1200 p.m.) 864.78 DELAFIELD, HARVEY, TABELL S&P CompOSite (1200 p.m.) 100.28 Cumulative Index (6/8/78) 758.02 RJSrak No statement or expression of opinion or any other molter herein contOlned IS, or IS to be deemed to be, directly or indirectly, on offer or the soliCitation of on offer to buy or sell any security referred to or mentioned The motler IS presented merely for the conver'!ence of the subscriber. Wlule e believe the sources of our lI,!formo tlon to be relmble, we In no way represent or guarantee the accuracy thereof nor of the stotements mude herein Any action to be token by the subSCriber should be based on hiS own Investlgollon and information Janney Montgomery Scott, Inc, 0 a corporaflon, and lIs officers or employees, may now have, or may toler toke, poslhons or trades In respect to any seCUrities mentioned In thiS or any future Issue, and such Posl\lon may be different from any views now or hereafter expressed In thiS or any other Issue Janney Montgomery Scott, Inc, which IS registered With the SEC as on Investment adVisor, may give adVice to Its Investment advisory and other customers mdependently of any statements mode In thiS or In any other Issue Further Informotlon on any seCUrity mentioned herein IS ovolloble On request IT –, o '- LLI lLJ 0 Cfl – Z Z H L'l IY y- 'm- m– en-' m-' ISNOIllI81 1830 o mm m' m'' m''