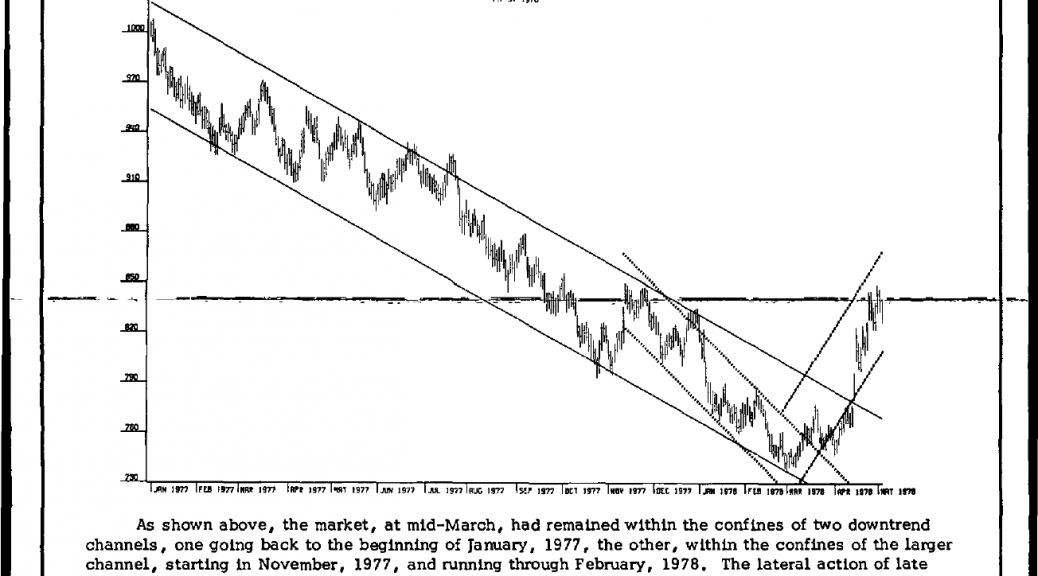 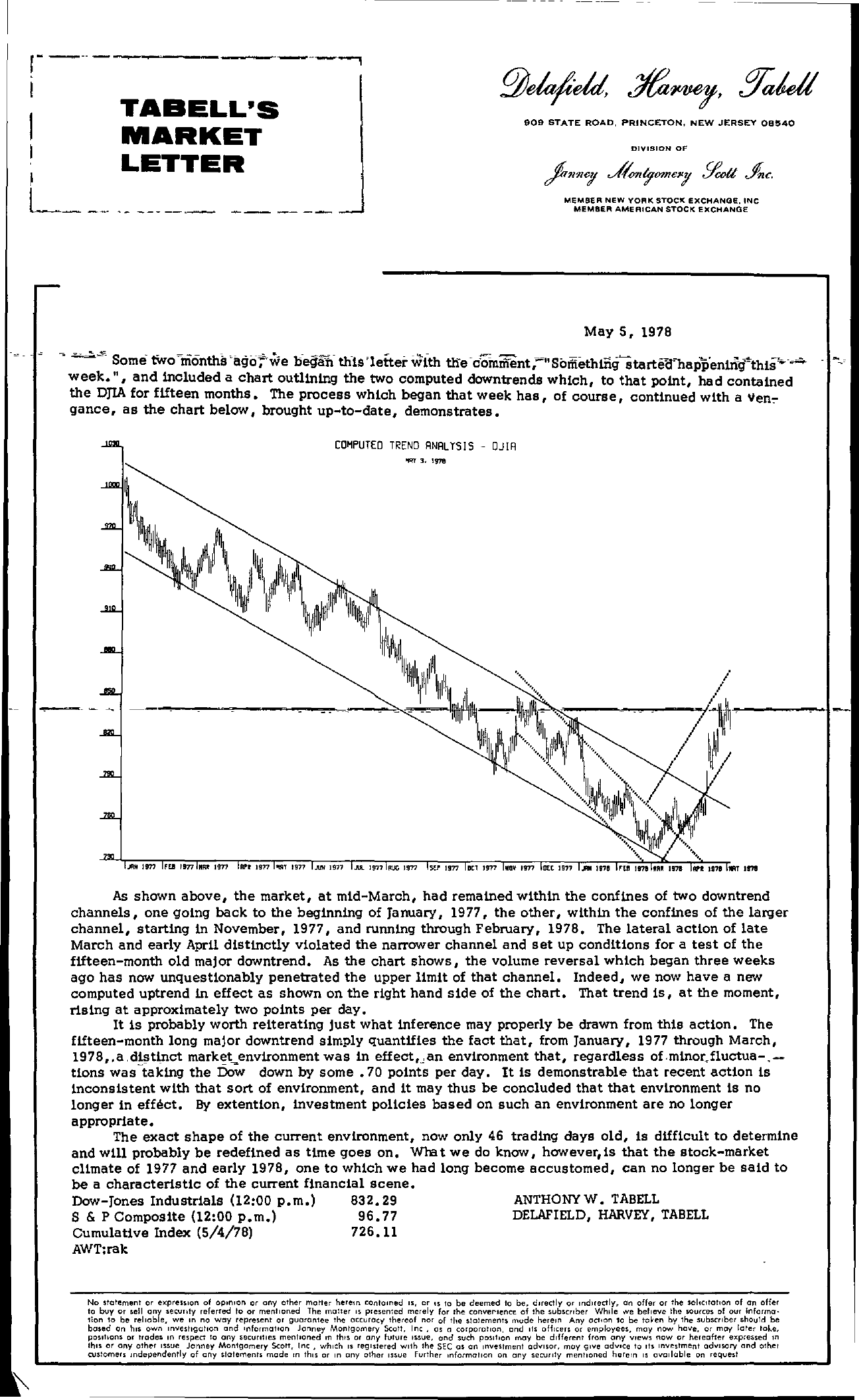 r — — —— 1—- I lI ————————–, TABELL'S MARKET LETTER 909 STATE ROAD, PRINCETON, NEW JERSEY OB540 DIVISION OF MEMBER NEW YORK STOCK eXCHANoe, INC MEM8ER AMERICAN STOCK EXCHANGE May 5, 1978 — -'- Some two began thIs 'letter with tile -c'OlniffEint.-SCllnethmgstartecfhapleniJfgthl8'—- week., and included a chart outlining the two computed downtrends which, to that point, had contained the D1A for fifteen months. The process which began that week has, of course, continued wlth a Yen,. gance, as the chart below, brought up-to-date, demonstrates. COMPUTED TREND ANALYSIS – DJIA 'lin' 3, 1978 — rUl 1m !Ill. 1978 A!'t! .178 IfIT 1m As shown above, the market, at mld-March, had remained within the confines of two downtrend channels, one golng back to the beginning of January, 1977, the other, wlthin the confines of the larger channel, starting in November, 1977, and running through February, 1978. The lateral action of late March and early April dlstlnctly violated the narrower channel and set up condltions for a test of the fifteen-month old major downtrend. As the chart shows, the volume reversal which began three weeks ago has now unquestionably penetrated the upper limit of that channel. Indeed, we now have a new computed uptrend in effect as shown on the rlght hand side of the chart. That trend ls, at the moment, rising at approxlmately two points per day. It ls probably worth relterating just what inference may properly be drawn from this action. The fifteen-month long major downtrend slmply quantifles the fact that, from January, 1977 through March, 1978,.a.distinct was in effectan envlronment that, regardless of.mlnorfluctua-.- tions was -taking the !Sow down by some. 70 points per day. It ls demonstrable that recent action ls inconslstent wlth that sort of envlronment, and lt may thus be concluded that that envlronment ls no longer ln effect. By extentlon, investment policles based on such an environment are no longer appropriate. The exact shape of the current environment, now only 46 trading days old, is difficult to determine and wlll probably be redefined as time goes on. Wha t we do know, however,ls that the stock-market climate of 1977 and early 1978, one to which we had long become accustomed, can no longer be sald to be a characteristic of the current financlal scene. Dow-Jones Industrlals (1200 p.m.) 832.29 ANTHONY W. TABELL S & P Composlte (1200 p.m.) 96.77 DELAFIELD, HARVEY, TABELL Cumulative lndex (5/4/78) 726.11 AWTrak No statement or expreUlon of opinion or any other motler herem contained IS, or IS 10 be deemed 10 be, directly or indirectly, an offer or the SolICitatIOn of on offer to buy or sell ony secuHly referred to or mentioned The molter IS presened merely for the converlenceo of the subscriber While we believe the Ources of our Informa tion to be relloble, we In no woy represent or guarantee the accurocy thereof nor of the statements mude herein Any aCTIOn to be by the subSCriber shOUld be based on hiS own investigation and 'nformation Janney Montgomery Scott, Inc, as a corparatlon, ond 115 officers or employees, may now have, or may later tale, poslhons or trades In respeCT 10 any securities menhoned In thiS or any future ISSUe, ond such pOSition may be different from any views now or hereafter epressed In or any other Issue Jonney Montgomery Seoll, Inc, which IS registered With the SEC as on Investment adVisor, moy give adVice to lis Investment odvlsory and other C\.Istomers Independently of any statements made In thiS or In any other Issue Further ,nformotlon on cny securety mentioned herein IS avolloble on request