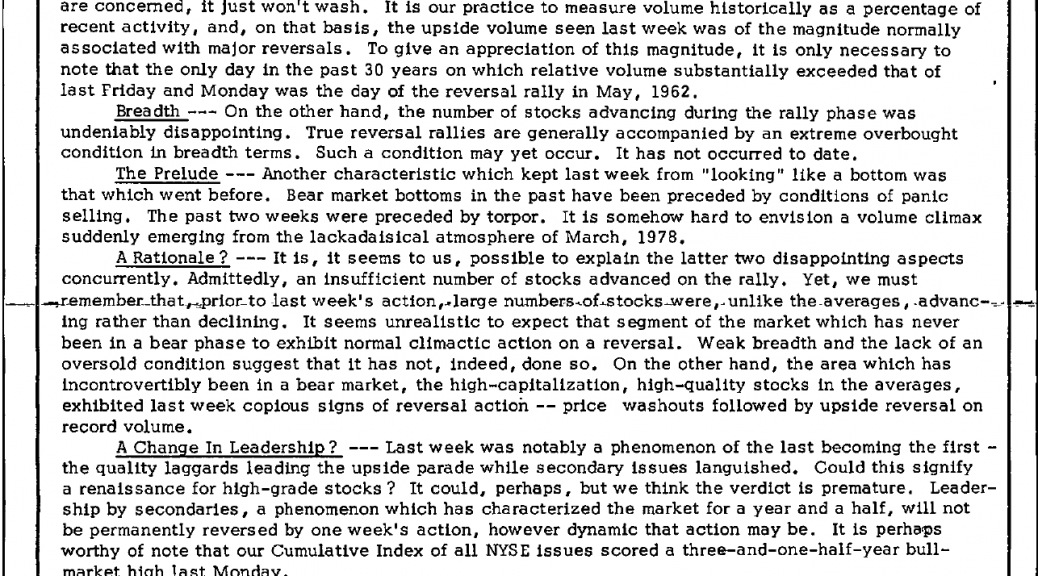 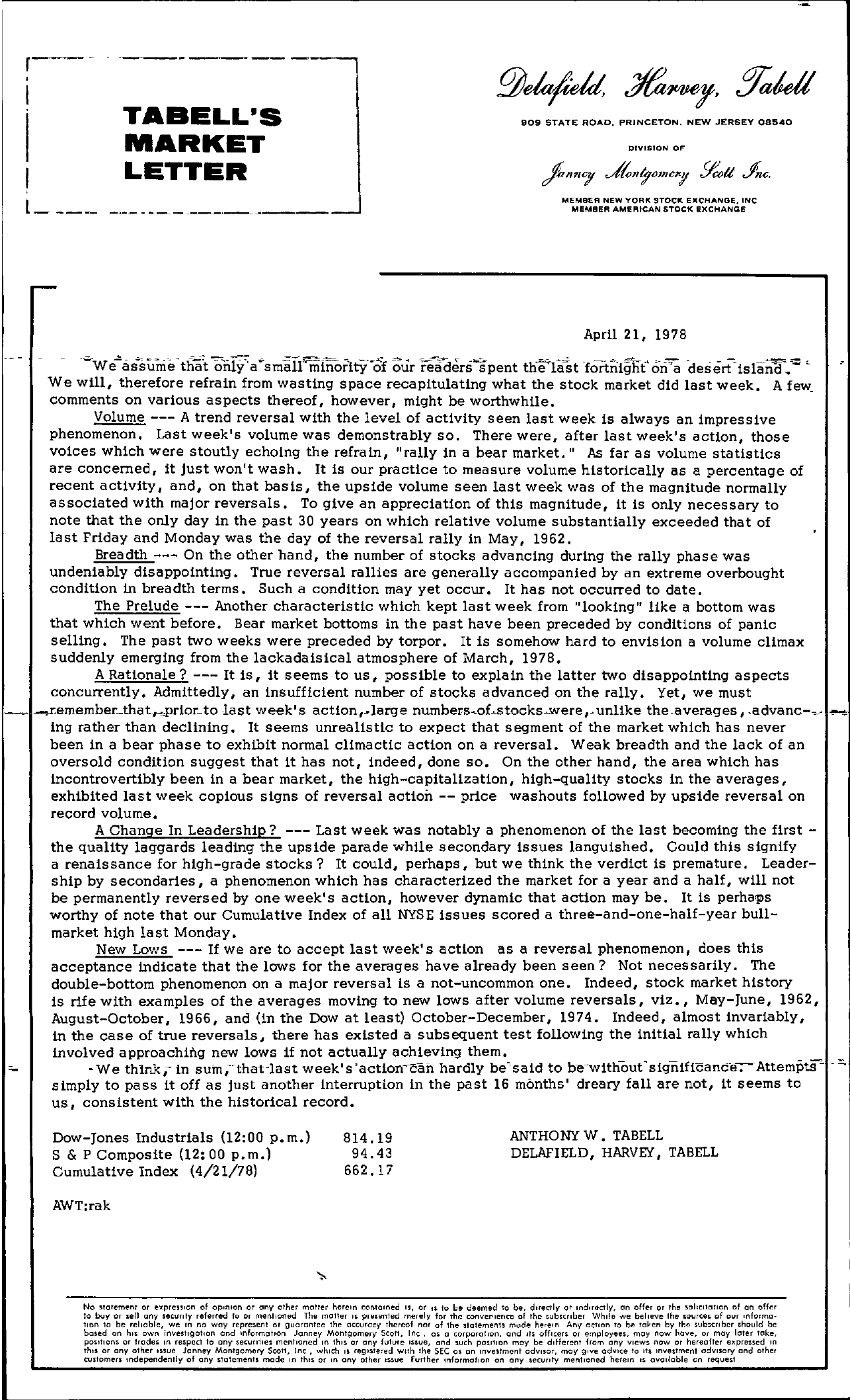 TABELL'S MARKET LETTER 909 STATE ROAD, PRINCETON. NEW JERSEY 08540 DIVISION OF MEMBER NEW YORK STOCK EXCHANGE, INC MEMBER AMERICAN STOCK EXCHANGE April 21, 1978 We-'-assume-ttlat ani)'' a our Celdersspent thelitstfortnighf on'a desertislan.f. c We will, therefore refrain from wasting space recapitulating what the stock market did last week. A few comments on various aspects thereof, however, might be worthwhile. Volume — A trend reversal with the level of activity seen last week is always an impressive phenomenon. Last week's volume was demonstrably so. There were, after last week's action, those voices which were stoutly echoing the refrain, rally in a bear market. As far as volume statistics are concerned, it Just won't wash. It is our practice to measure volume historically as a percentage of recent activity, and, on that basis, the upside volume seen last week was of the magnitude normally associated with major reversals. To give an appreciation of this magnitude, it is only necessary to note that the only day in the past 30 years on which relative volume substantially exceeded that of last Friday and Monday was the day of the reversal rally in May, 1962. Breadth — On the other hand, the number of stocks advancing during the rally phase was undeniably disappointing. True reversal rallies are generally accompanied by an extreme overbought condition in breadth terms. Such a condition may yet occur. It has not occurred to date. The Prelude — Another characteristic which kept last week from looking like a bottom was that which went before. Bear market bottoms in the past have been preceded by conditions of panic selling. The past two weeks were preceded by torpor. It is somehow hard to envision a volume climax suddenly emerging from the lackadaisical atmosphere of March, 1978. A Rationale — It is, it seems to us, possible to explain the latter two disappointing aspects concurrently. Admittedly, an insufficient number of stocks advanced on the rally. Yet, we must 1ast week's action,.large unlike the,averages, Ing rather than declining. It seems unrealistic to expect that segment of the market which has never been in a bear phase to exhibit normal climactic action on a reversal. Weak breadth and the lack of an oversold condition suggest that It has not, indeed, done so. On the other hand, the area which has incontrovertibly been in a bear market, the high-capitalization, high-quality stocks in the averages, exhibited last week copious signs of reversal action — price washouts followed by upside reversal on record volume. A Change In Leadership — Last week was notably a phenomenon of the last becoming the first – the quality laggards leading the upside parade while secondary Issues languished. Could this signify a renaissance for high-grade stocks It could, perhaps, but we think the verdict is premature. Leader- ship by secondaries, a phenomenon which has characterized the market for a year and a half, will not be permanently reversed by one week's action, however dynamic that action may be. It is worthy of note that our Cumulative Index of all NYSE issues scored a three-and-one-half-year bull- market high last Monday. New Lows — If we are to accept last week's action as a reversal phenomenon, does this acceptance indicate that the lows for the averages have already been seen Not necessarily. The double-bottom phenomenon on a major reversal is a not-uncommon one. Indeed, stock market history is rife with examples of the averages moving to new lows after volume reversals, viz., May-June, 1962, August-October, 1966, and (in the Dow at least) October-December, 1974. Indeed, almost Invariably, in the case of true reversals, there has existed a subsequent test following the initial rally which involved approaching new lows if not actually achieving them. – .. We thInk,- in sum,–that-last week's 'actionCan hardly be-said to he-without-significance–AttemptS – – simply to pass It off as just another interruption in the past 16 months' dreary fall are not, it seems to us, consistent with the historical record. Dow-Jones Industrials (1200 p. m.) S & P Composite (12 00 p.m.) Cumulative Index (4/21/78) 814.19 94.43 662.17 ANTHONY W. TABELL DELAFIELD, HARVEY, TABELL AWTrak No statement or expreSSion of op'OIon or any other motter herein contolned IS, or IS to be deemed to be, directly or on offer or the sohcltotlon 01 an offer to !xIy or sell any seclJrlly referred 10 or mentioned The mOiler presented merely for the convellence of the subscriber While believe the sources of our Informa- tion 10 be reliable, we In no way represent or guorantee the accuracy thereof nor of ihe statements mude herein Any action to be by the subscriber should be based on hiS own inliestlgatlon and mformatlon Janney Montgomery Seoll, Inc, as a corporation, and ,ts officers or employees, may now have, or may lofer toke, POSitions or trades In respect to ony secvfltles mentioned In thiS or ony future Issue, and such POSition may be different from any views now or hereofter exprened In thiS or any other Issue Janney Montgomery Seotl, Inc, which IS registered wuh the SEC as on Investment adVisor, may give adVice to Its Investment adVisory and other customers Independently of any stotements mode m thiS or m ony other Issue further information on any seamty mentioned herem IS available on request