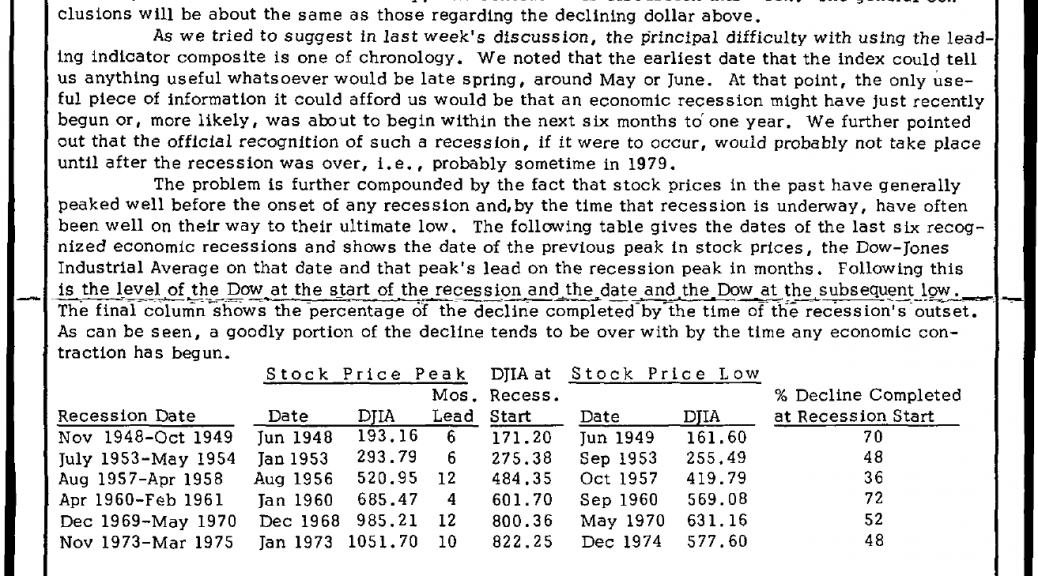 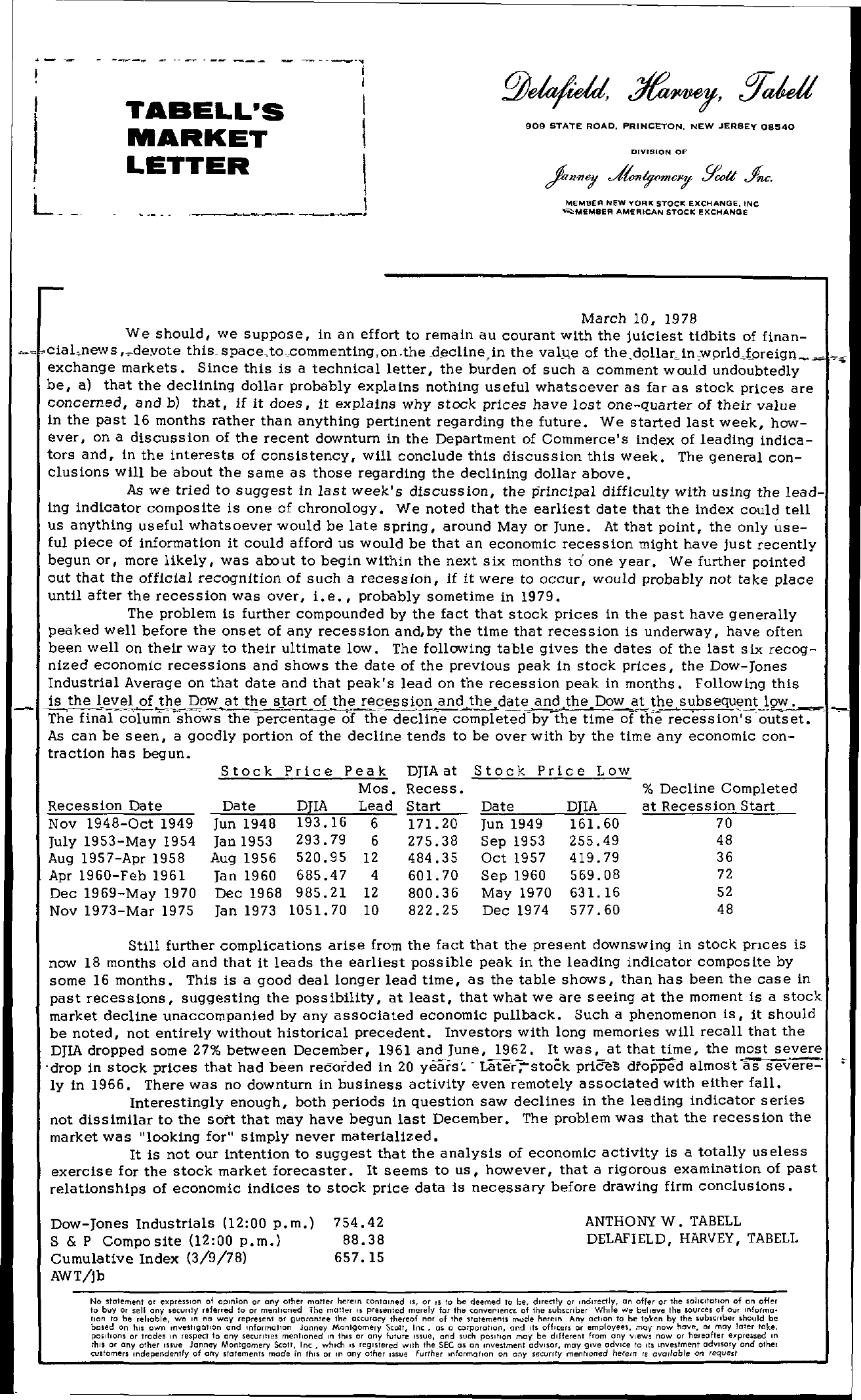 – –..–… — —-. – – —-I, TABELL'S I MARKET \ LETTER \ j ——————- 909 STATE ROAD, PRINCETON. NEW JERSEY 08!540 DIVISION OF PwIIEM8ER NEW VORK STOCK EXCHANGE, tNC MEMBEA AMERICAN STOCK EXCHANGe March 10, 1978 We should, we suppose, in an effort to remain au courant with the juiciest tidbits of flnan- cialnews ,deyote this space toocommenting ,on.the dl'lcline)n the valJ.\e of the.dollarinowprldloreig!) .,, exchange markets. Since this is a technical letter, the burden of such a comment would undoubtedly be, a) that the declining dollar probably explains nothing useful whatsoever as far as stock prices are concerned, and b) that, if it does, it explains why stock prices have lost one-quarter of their value in the past 16 months rather than anything pertinent regarding the future. We started last week, how- ever, on a discussion of the recent downturn in the Department of Commerce's index of leading indica- tors and, in the interests of consistency, will conclude this discussion this week. The general con- clusions will be about the same as those regarding the declining dollar above. As we tried to suggest in last week's discussion, the principal difficulty with using the lead- ing indicator composite is one of chronology. We noted that the earliest date that the index could tell us anything useful whatsoever would be late spring, around Mayor June. At that pOint, the only use- ful piece of information it could afford us would be that an economic recession might have just recently begun or, more likely, was about to begin within the next six months to' one year. We further pOinted out that the official recognition of such a recession, if it were to occur, would probably not take place until after the recession was over, I.e., probably sometime in 1979. The problem is further compounded by the fact that stock prices in the past have generally peaked well before the onset of any recession and, by the time that recession is underway, have often been well on their way to their ultimate low. The following table gives the dates of the last six recog- nized economic recessions and shows the date of the previous peak in stock prices, the Dow-Jones Industrial Average on that date and that peak's lead on the recession peak in months. Following this is -Th ethfelnleYvecolluomfrit.heshD-6owws-atht ethpeesrctaernttaogfeth6eItrheceedsesciollnneancd; the date and the Dow ;mpleted'bythe time o iattlltehercseuSSbisoneq'su;e;;nrtts'l-o'weC-.t-.-t-…. As can be seen, a goodly portion of the decline tends to be over with by the time any economic con- tra ction ha s beg un. Stock P ric e Peak DJIA at Stock Price Low Mos. Recess. Decline Completed Recession Date Date DlIA Lead Start Date DIIA at Recess ion Start Nov 1948-0ct 1949 Jun 1948 193.16 6 171.20 Jun 1949 161. 60 70 July 1953-May 1954 Jan 1953 293.79 6 275.38 Sep 1953 255.49 48 Aug 1957-Apr 1958 Aug 1956 520.95 12 484.35 Oct 1957 419.79 36 Apr 1960-Feb 1961 Jan 1960 685.47 4 601.70 Sep 1960 569.08 72 Dec 1969-May 1970 Dec 1968 985.21 12 800.36 May 1970 631. 16 52 Nov 1973-Mar 1975 Jan 1973 1051. 70 10 822.25 Dec 1974 577.60 48 Still further complications arise from the fact that the present downswing in stock pnces is now 18 months old and that it leads the earliest possible peak in the leading indicator composite by some 16 months. This is a good deal longer lead time, as the table shows, than has been the case in past recessions, suggesting the possibility, at least, that what we are seeing at the moment is a stock market decline unaccompanied by any associated economic pullback. Such a phenomenon is, it should be noted, not entirely without historical precedent. Investors with long memories will recall that the DJIA dropped some 27 between December, 1961 and June, 1962. It was, at that time, the most severe 'drop in stock prices that had been recoided in 20 years'. Later;–stock priC.,s dropped almost as severe-' ly in 1966. There was no downturn in business activity even remotely associated with either fall. Interestingly enough, both periods in question saw declines in the leading indicator series not dissimilar to the soft that may have begun last December. The problem was that the recession the market was looking for Simply never materialized. It is not our intention to suggest that the analYSis of economic activity is a totally useless exercise for the stock market forecaster. It seems to us, however, that a rigorous examination of past relationships of economic indices to stock price data is necessary before drawing firm conclusions. Dow-Jones Industrials (1200 p.m.) S & P Composite (1200 p.m.) Cumulative Index (3/9/78) AWT/jb 754.42 88.38 657.15 ANTHONY W. TABELL DELAFIELD, HARVEY, TABELL No statement or expression of opmion or any other moIler herein contained IS, Of IS 10 be deemed 10 be, directly or indirectly, an offer or the soliCitatIOn of on offer to buy or sell any lecunty referred 10 or mentioned The maiter I presented merely for the converlence of the subSCriber Whde we believe the sources of our Informa tlon to be relloble, we In no way represent or guarantee the occuracy thereof nor of the statements mude herein Any aellon 10 be token by the subSCriber should be based on hiS own mvellgahOn ond Infarmohon Jonney Montgomery Scofl, Inc, as a corporation, and Its officers or employeel, moy now have, or may later toke, pOlltlons or trades In respect to ony securities mentioned In thiS ar any future Issue, ond such position may be different from ony views now or hereafter efpressed In thiS or any other Issve Janney Montgomery Scott, Inc, which IS reglslered wllh the SEC as on IIlvestment adVisor, may give adVice to lIs Investment adVisory and othel ontomers IIldependently at any statements mode in thiS or III any other Issue further InformatIon on any securrty mentioned herem IS available on request