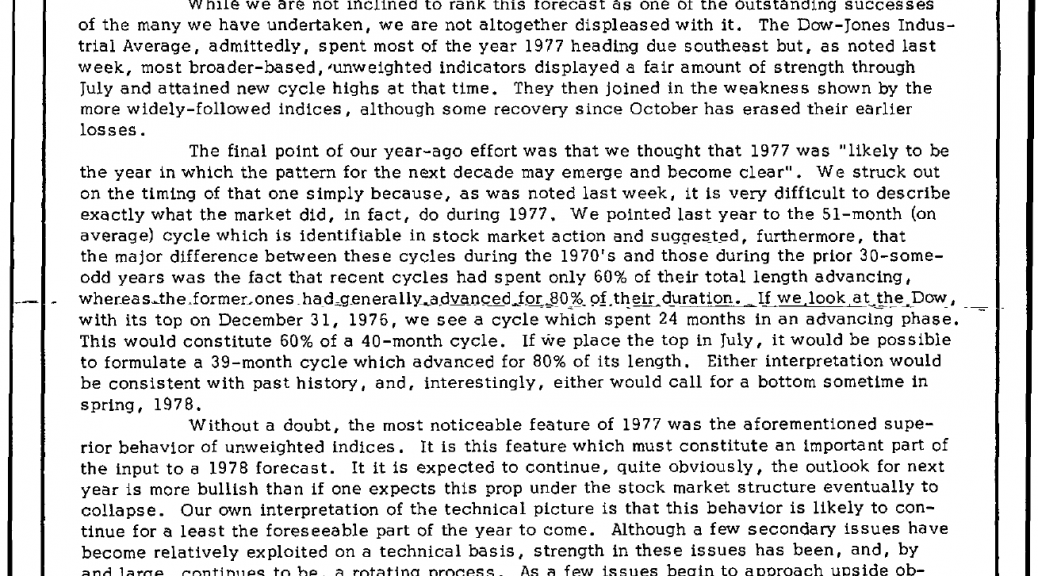 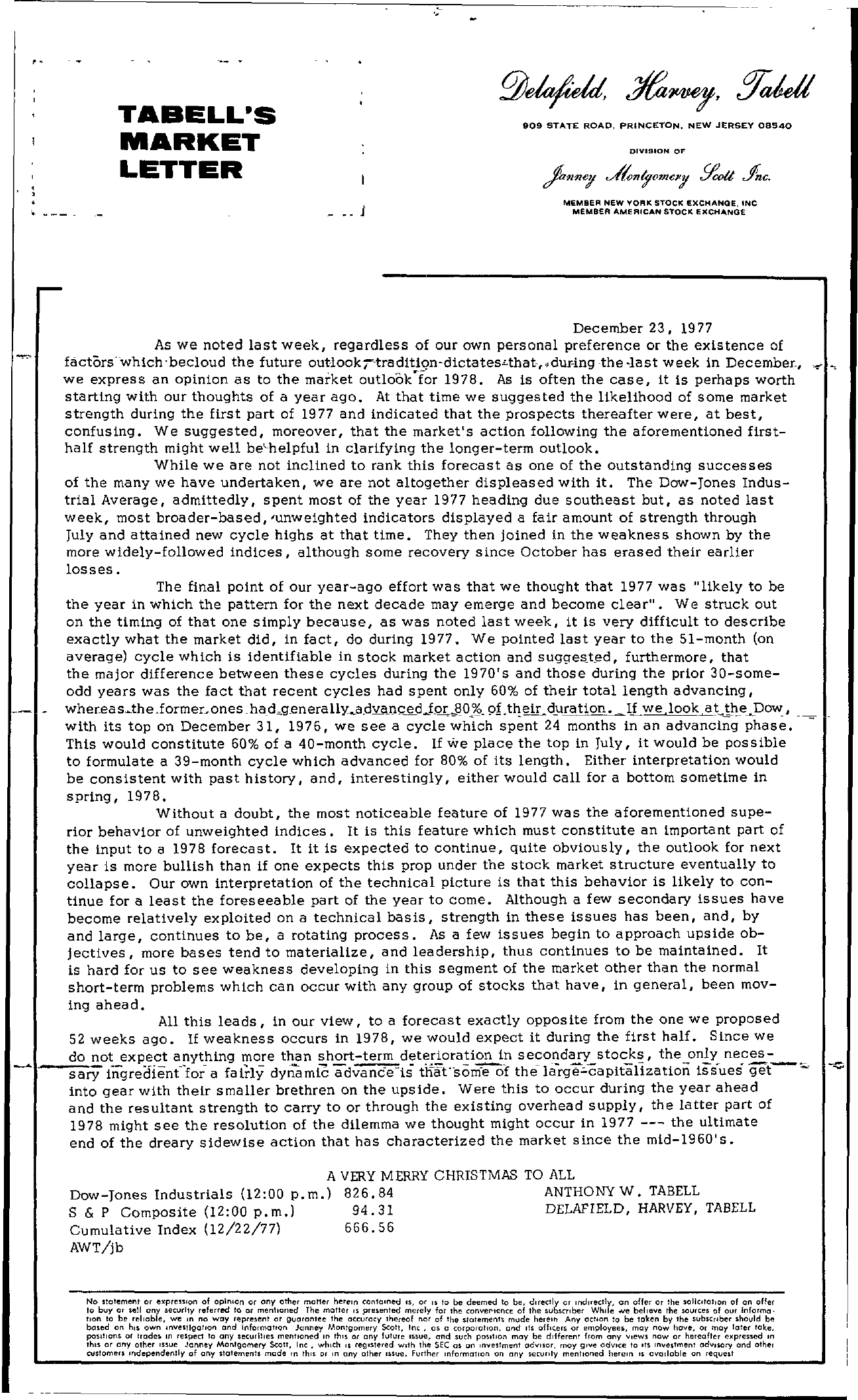 ,' TABELL'S MARKET LETTER 1 909 STATE ROAD, PRINCETON. NEW JERSEY 08540 DIVISION OF MEMBER NEW YORK STOCK EXCHANGE, INC MEMBER AMERICAN STOCK EXCHANGE December 23, 1977 As we noted last week, regardless of our own personal preference or the existence of factors'which -becloud the future outlook7tr8ditI9n'dictatesthat .duFing the last week in December, we express an opinion as to the market outlook'for 1978. As is often the case, it is perhaps worth starting with our thoughts of a year ago. At that time we suggested the likelihood of some market strength during the first part of 1977 and indicated that the prospects thereafter were, at best, confusing. We suggested, moreover, that the market's action follOWing the aforementioned firsthalf strength might well beLhelpful in clarifying the longer-term outlook. While we are not inclined to rank this forecast as one of the outstanding successes of the many we have undertaken, we are not altogether displeased with it. The Dow-Jones Industrial Average, admittedly, spent most of the year 1977 heading due southeast but, as noted last week, most broader-based, 'unweighted indicators displayed a fair amount of strength through July and attained new cycle highs at that time. They then Joined in the weakness shown by the more widely-followed indices, although some recovery since October has erased their earlier losses. The final point of our year-ago effort was that we thought that 1977 was likely to be the year in which the pattern for the next decade may emerge and become clear. We struck out on the timing of that one Simply because, as was noted last week, it is very difficult to describe exactly what the market did, in fact, do during 1977. We pOinted last year to the 51-month (on average) cycle which is identifiable in stock market action and sugges,t.ed, furthermore, that the major difference between these cycles during the 1970's and those during the prior 30-someodd years was the fact that recent cycles had spent only 60 of their total length advancing, whereasthe,formeLones hadgenerallyadva.l),-d…fpr80fl, o!.their.d.uration. If we look atlheDow, with its top on December 31, 1976, we see a cycle which spent 24 months in an advancing phase. This would constitute 60 of a 40-month cycle. If we place the top in July, it would be possible to formulate a 39-month cycle which advanced for 80 of its length. Either interpretation would be consistent with past history, and, interestingly, either would call for a bottom sometime in spring, 1978. Without a doubt, the most noticeable feature of 1977 was the aforementioned supe- rior behaVior of unweighted indices. It is this feature which must constitute an important part of the input to a 1978 forecast. It it is expected to continue, quite obviously, the outlook for next year is more bullish than if one expects this prop under the stock market structure eventually to collapse. Our own interpretation of the technical picture is that this behavior is likely to continue for a least the foreseeable part of the year to come. Although a few secondary issues have become relatively exploited on a technical basis, strength in these issues has been, and, by and large, continues to be, a rotating process. As a few issues begin to approach upside objectives, more bases tend to materialize, and leadership, thus continues to be maintained. It is hard for us to see weakness developing in this segment of the market other than the normal short-term problems which can occur with any group of stocks that have, in general, been mov- ing ahead. All this leads, in our view, to a forecast exactly opposite from the one we proposed 52 weeks ago. If weakness occurs in 1978, we would expect it during the first half. Since we do not expect anything more than short-term deterioration in secondary stocks, the only neces-'I—s-a-r; ingredlenf'for' a fail-ly dynamic advance'is til'gCsoOi'eOf the'large-capitallzation iss'ues' get-' into gear with their smaller brethren on the upside. Were this to occur during the year ahead and the resultant strength to carry to or through the existing overhead supply, the latter part of 1978 might see the resolution of the dilemma we thought might occur in 1977 — the ultimate end of the dreary sidewise action that has characterized the market since the mid-1960's. A VERY MERRY CHRISTMAS TO ALL Dow-Jones Industrials (1200 p.m.) 826.84 S & P Composite (1200 p.m.) 94.31 ANTHONYW. TABELL DELAFIELD, HARVEY, TABELL Cumulative Index (12/22/77) 666.56 AWT/jb No statement or expression of oplmon or any other molter herein contained IS, or IS 10 be deemed to be, directly or ,ndirectly, on offer or the sOlitltol,on of on offer to buy or S!!I any security roferred to or menlloned The moiler IS presented merely for Ihe ConVelIenCE of the subscriber While Ne believe the sources of our Information to be reliable, we In no way r!present or guarantee the accuracy thereof nor of the statement mude herein Any acllon to be token by the sub5CTlber should be bosed on hiS own lnve511gallon and Informallon Janney Montgomery 5ott, Inc. as a corporation, and liS offKers or employee5, may now have. or may later toke. poSitions or trades In repect to any e(urllles mentioned In thiS or any future ,nue, and such POSition may be different from any views now or hereafter expressed In thiS or any other Issue Janney Montgomery 5011. Inc, which IS registered w,th Ihe SEC as an mvestment adVisor, may give adVice to ,IS Investment advls.ory and othel customers Independently of any statemenlS mode In thiS or m any other Issue. Further Information on any secunty mentioned herein IS available on request