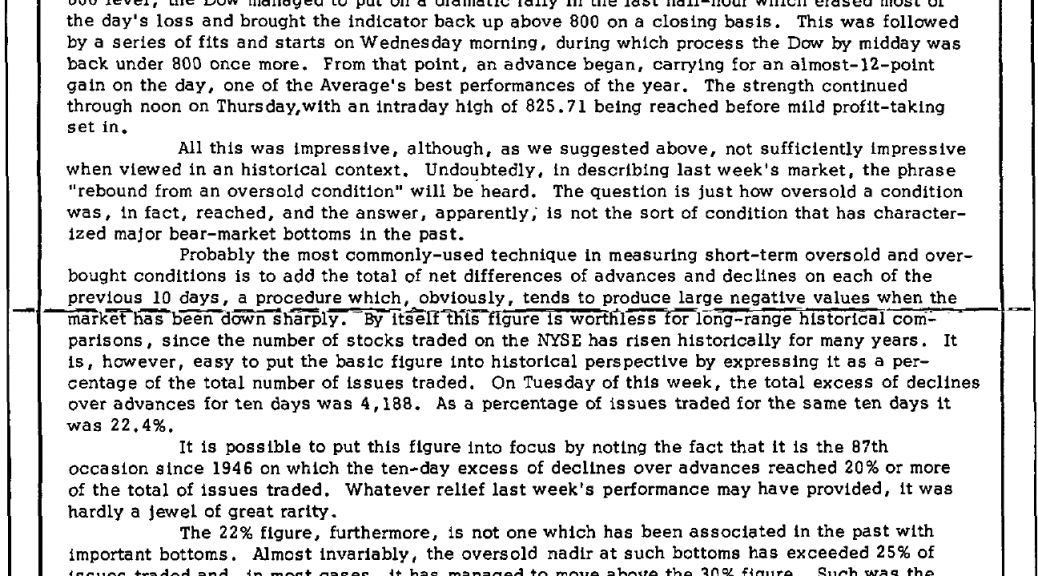 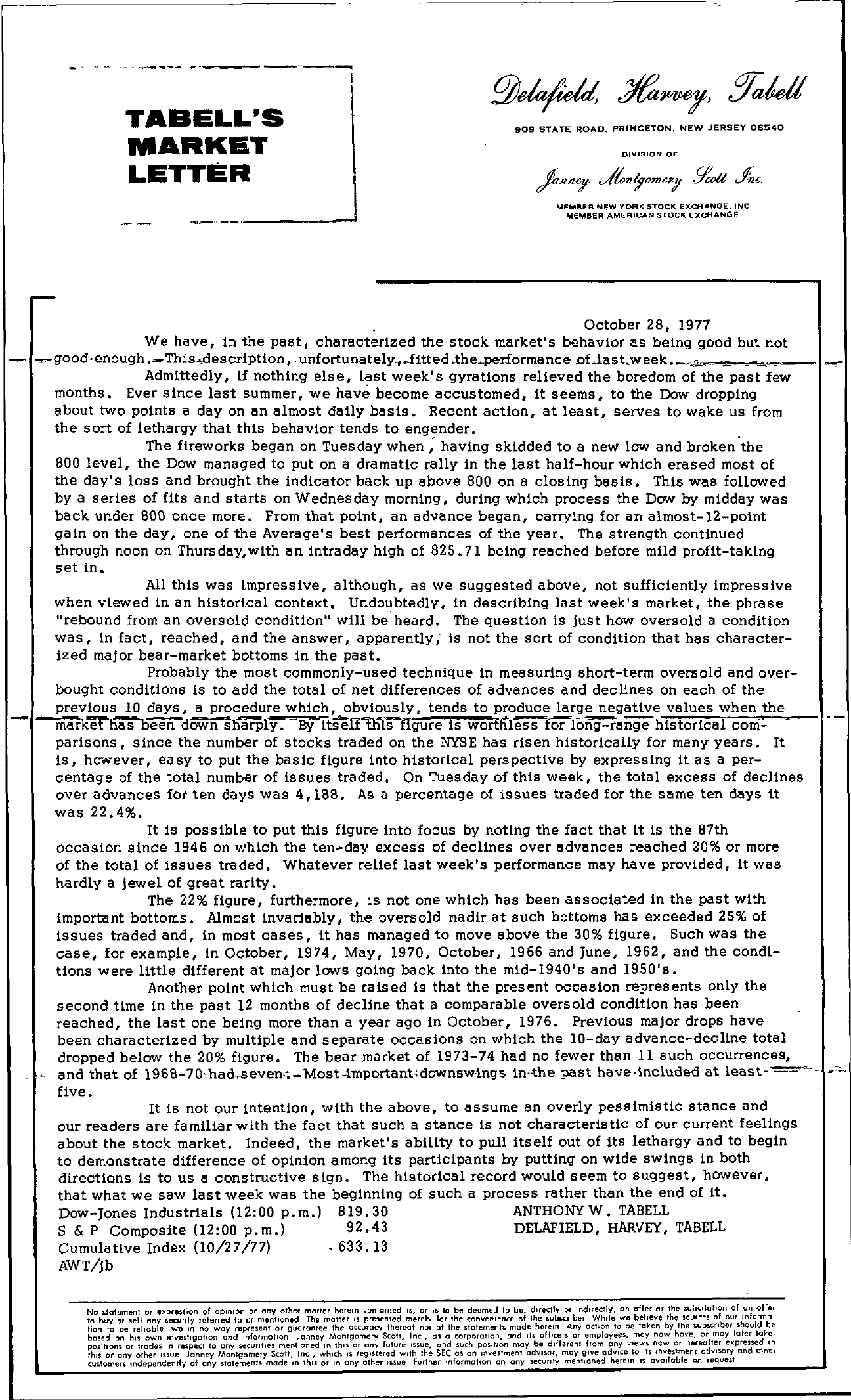 …——- – — – ……—- TABELL'S MARKET LETTER – – – – ———-' 909 STATE ROAD, PRINCETON, NEW JERSEY 08540 DIVISION OF MEMBER NEW YORK STOCK EXCHANGE, INC MEMBER AMERICAN STOCK EXCHANGE October 28, 1977 We have, in the past, characterized the stock market's behavior as being good but not good enough.- ThisAdescription, unfortunate1y,fitted theperformance oLlas t,w eek ' '…,' I…- Admittedly, if nothing else, last week's gyrations relieved the boredom of the past few months. Ever since last summer, we have become accustomed, it seems, to the Dow dropp1ng about two points a day on an almost daily basis. Recent action, at least, serves to wake us from the sort of lethargy that this behaVior tends to engender. The fireworks began on Tuesday when; having skidded to a new low and broken the 800 level, the Dow managed to put on a dramatic rally in the last half-hour which erased most of the day's loss and brought the indicator back up above 800 on a closing basis. This was followed by a series of fits and starts on Wednesday morning, during which process the Dow by midday was back under 800 once more. From that point, an advance began, carrying for an almost-12-point gain on the day, one of the Average's best performances of the year. The strength continued through noon on ThursdaY,with an intra day high of 825.71 being reached before mild profit-taking set in. All this was impressive, although, as we suggested above, not sufficiently impressive when viewed in an historical context. Undoubtedly, in describing last week's market, the phrase rebound from an oversold condition will be heard. The question is just how oversold a condition was, in fact, reached, and the answer, apparently .. is not the sort of condition that has character- ized major bear-market bottoms in the past. Probably the most commonly-used technique in measuring short-term oversold and over- bought conditions is to add the total of net differences of advances and declines on each of the previous 10 days, a procedure which, obviously, tends to produce large negative values when the -1'–''m'a'rKet nas oeen aOWiiSharply. By-itSeII1J1'isfigure Is wortflless for long-range historical coni'' parisons, since the number of stocks traded on the NYSE has risen historically for many years. It is, however, easy to put the basic figure into historical perspective by expressing it as a per- centage of the total number of issues traded. On Tuesday of this week, the total excess of declines over advances for ten days was 4,lBB. As a percentage of issues traded for the same ten days it was 22.4. It is possible to put this figure into focus by noting the fact that it is the B7th occasion since 1946 on which the ten-day excess of declines over advances reached 20 or more of the total of issues traded. Whatever relief last week's performance may have provided, it was hardly a jewel of great rarity. The 22 figure, furthermore, is not one which has been associated in the past with important bottoms. Almost invariably, the oversold nadir at such bottoms has exceeded 25 of issues traded and, in most cases, it has managed to move above the 30 figure. Such was the case, for example, in October, 1974, May, 1970, October, 1966 and June, 1962, and the condi- tions were little different at major lows going back into the mid-1940's and 1950's. Another point which must be raised is that the present occasion represents only the second time in the past 12 months of decline that a comparable oversold condition has been reached, the last one being more than a year ago in October, 1976. Previous major drops have been characterized by multiple and separate occasions on which the 10-day advance-decline total dropped below the 20 figure. The bear market of 1973-74 had no fewer than 11 such occurrences, and that of 196B-70-had.seven–Most-important;downswIngs inthe past haveincludedat least– five. It is not our intention, with the above, to assume an overly pessimistic stance and our readers are familiar with the fact that such a stance is not characteristic of our current feelings about the stock market. Indeed, the market's ability to pull itself out of its lethargy and to begin to demonstrate difference of opinion among its participants by putting on Wide swings in both directions is to us a constructive sign. The historical record would seem to suggest, however, that what we saw last week was the beginning of such a process rather than the end of it. Dow-Jones Industrials (1200 p.m.) 819.30 ANTHONYW. TABELL S & P Composite (1200 p.m.) 92.43 DELAFIELD, HARVEY, TABELL Cumulative Index (10/27/77) . 633.13 AWT/jb No statement or expreion of opinion or any other matter herein contolned IS, or IS to be deemed to be, directly or Indirectly, on offer or the ollcltotlon of on offer to buy or sell any security tion to be relloble, we In referred no way 10 or mentioned The mOiler I presented merely represent or guarantee the occuracy thereof nor for of the the (onverlence of the subSCriber statements mode herein Any aCWhohniletooNbeebteolieevne btyhetheousrucbeSs Corfiboeru rhinoufoldrmbae- based on hiS own Investlgallon and Information Janney Montgomery Scott, Inc, os a corporation, and lis officers or employees, may now hove, or may later tae, positions or trades In respect to any securities mentioned In thiS or any future Issue, and such POSition may be different from any vIews now or hereafter expressed In thl or any other Inue Janney Montgomery Scott, Inc, which IS registered With the SEC os on iflvestment adVisor, may give odv.,e 10 ItS Investment advlSOry ond othel cvstomers Independently of any statements mode In thiS or In any other Issue further mforma/lon on any security mentioned herein IS available on request