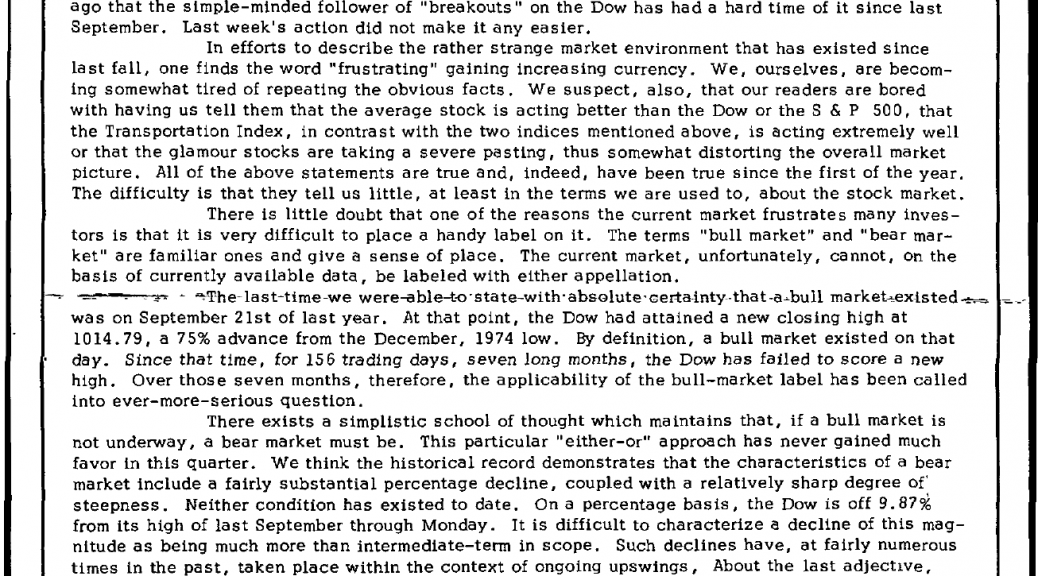 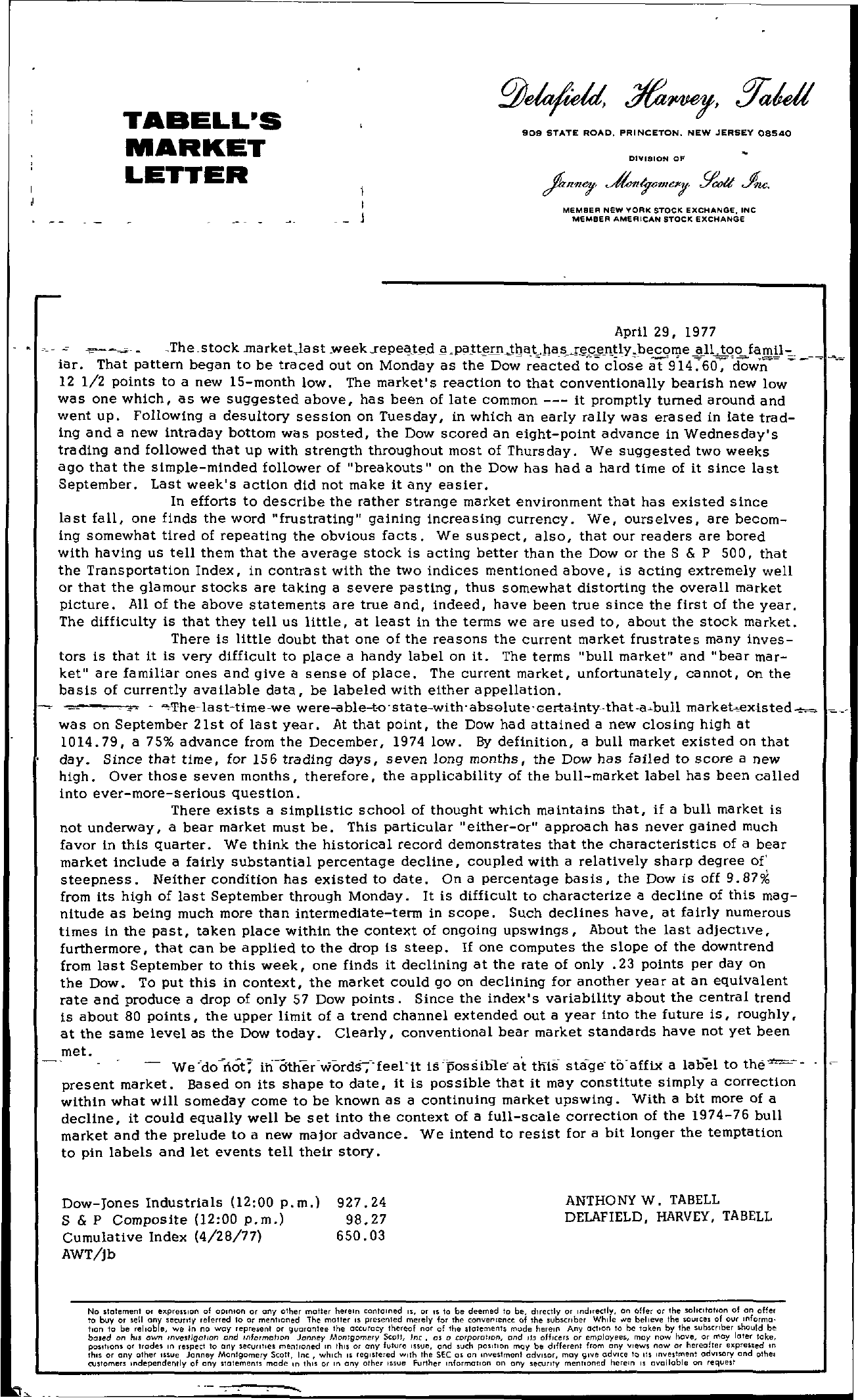 TABELL'S MARKET LETTER I . J 909 STATE ROAD, PRINCETON, NEW JERSEY 08540 DIVISION OF' MEMBER NEW VORK STOCK EXCHANGE, INC MEMBER AMERICAN STOCK eXCHANGE April 29, 1977 .,,-. ,The.stock .market)ast .weekJepeaJ.d g,paJtrnJbathas.reCjl.ntly.become alL too famil- -toiar. That pattern began to be traced out on Monday as the Do; eacied c-las-e aT'9'l4 -60 , -d;w; — . 12 1/2 pOints to a new IS-month low. The market's reaction to that conventionally bearish new low was one which, as we suggested above, has been of late common — it promptly turned around and went up. Following a desultory session on Tuesday, in which an early rally was erased in late trad- ing and a new intraday bottom was posted, the Dow scored an eight-pOint advance in Wednesday's trading and followed that up with strength throughout most of Thursday. We suggested two weeks ago that the Simple-minded follower of breakouts on the Dow has had a hard time of it since last September. Last week's action did not make it any easier. In efforts to describe the rather strange market environment that has existed since last fall, one finds the word frustrating gaining increasing currency. We, ourselves, are becom- ing somewhat tired of repeating the obvious facts. We suspect, also, that our readers are bored with having uS tell them that the average stock is acting better than the Dow or the S & P 500, that the Transportation Index, in contrast with the two indices mentioned above, is acting extremely well or that the glamour stocks are taking a severe pasting, thus somewhat distorting the overall market picture. All of the above statements are true and, indeed, have been true since the first of the year. The difficulty is that they tell us little, at least in the terms we are used to, about the stock market. There is little doubt that one of the reasons the current market frustrates many inves- tors is that it is very difficult to place a handy label on it. The terms bull market and bear mar- ket are familiar ones and give a sense of place. The current market, unfortunately, cannot, on the basis of currently available data, be labeled with either appellation. .-.,. –,–.- T'he-last-time-we were-able-t-o'state-with'absolute-certainty.that-abull market..extsted was on September 21st of last year. At that point, the Dow had attained a new closing high at 1014.79, a 75 advance from the December, 1974 low. By definition, a bull market existed on that day. Since that time, for 156 trading days, seven long months, the Dow has failed to score a new high. Over those seven months, therefore, the applicability of the bull-market label has been called into ever-more-serious question. There exists a Simplistic school of thought which maintains that, if a bull market is not underway, a bear market must be. This particular either-or approach has never gained much favor in this quarter. We think the historical record demonstrates that the characteristics of a bear market include a fairly substantial percentage decline, coupled with a relatively sharp degree of steepness. Neither condition has existed to date. On a percentage basis, the Dow is off 9.87 from its high of last September through Monday. It is difficult to characterize a decline of this mag- nitude as being much more than intermediate-term in scope. Such declines have, at fairly numerous times in the past, taken place within the context of ongoing upswings, About the last adjective, furthermore, that can be applied to the drop is steep. If one computes the slope of the downtrend from last September to this week, one finds it declining at the rate of only .23 pOints per day On the Dow. To put this in context, the market could go on declining for another year at an equivalent rate and produce a drop of only 57 Dow pOints. Since the index's variability about the central trend is about 80 points, the upper limit of a trend channel extended out a year into the future is, roughly, at the same level as the Dow today. Clearly, conventional bear market standards have not yet been met. – Wedoriot; in6ther'words;-feel'it iSPossilile-at tllls- stage-to-afflX a label to the– present market. Based on its shape to date, it is possible that it may constitute simply a correction within what will someday come to be known as a continuing market upswing. With a bit more of a decline, it could equally well be set into the context of a full-scale correction of the 1974-76 bull market and the prelude to a new major advance. We intend to resist for a bit longer the temptation to pin labels and let events tell their story. Dow-Jones Industrials (1200 p.m.) S & P Composlte (1200 P. m.) Cumulative Index (4/28/77) AWT/jb 927.24 98.27 650.03 ANTHONY W. TABELL DELAFIELD, HARVEY, TABELL No statement or eprenlon of opinion or any other motter herein contained IS, or IS 10 be deemed to blL', directly or Indirectly, on offer or Ihe 501lcltollon of on offer to buy or ell any setIJf1ly referred 10 or mentioned The moiler 15 presented merely for the converlencc of the lvbscrtber While oNe believe the sovrces of ovr InformotlOn to be relloble, we In no way represent or guarantee Ihe accuracy thereof nor of Ihe statements meade herein Any ochon 10 be token by the subscnber shovld be based on hu own mvestlgotlOn and mformahon Janney Montgomery Scofl, Inc, as 0 corporal/on, and tts offtcen or employees, rnoy now have, or may loler lake, poslhons or Irodes In respect to ony secvrlhes menttoned In thiS or any fulvre ISSVe, and svch pOSition may be different from any Views now or hereafter exprened tn thiS or any other ISSUe Jonney Montgomery ScalI, Inc, whICh IS registered wllh the SEC as on Investment adVisor, may give adVice to lis Investment adVisory and olhel customers Independently of any statements mode In Ihls or In any other Issve Fvrlher information on ony secl,trlly menlloned herein IS available on request –.