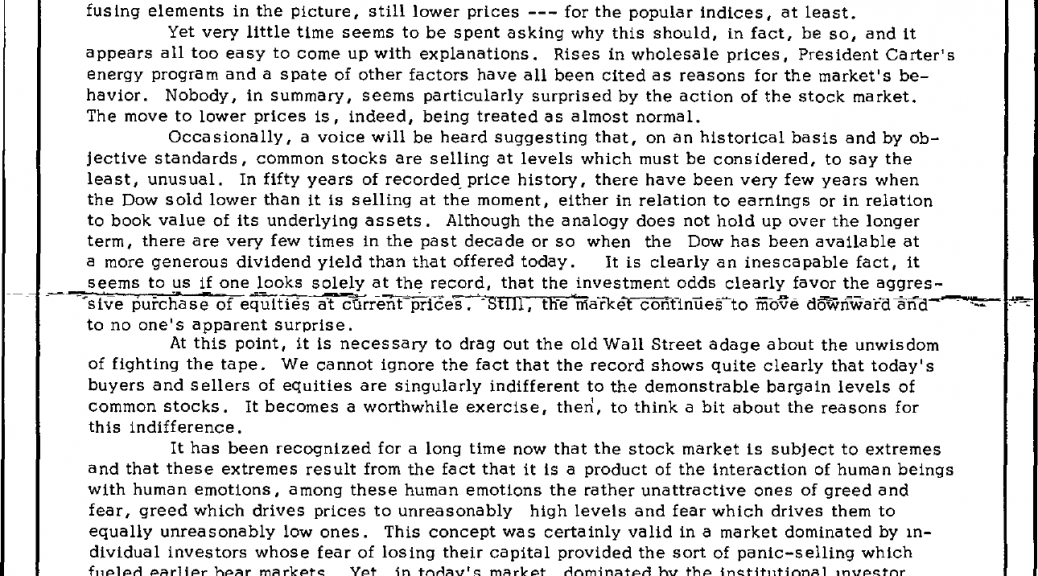 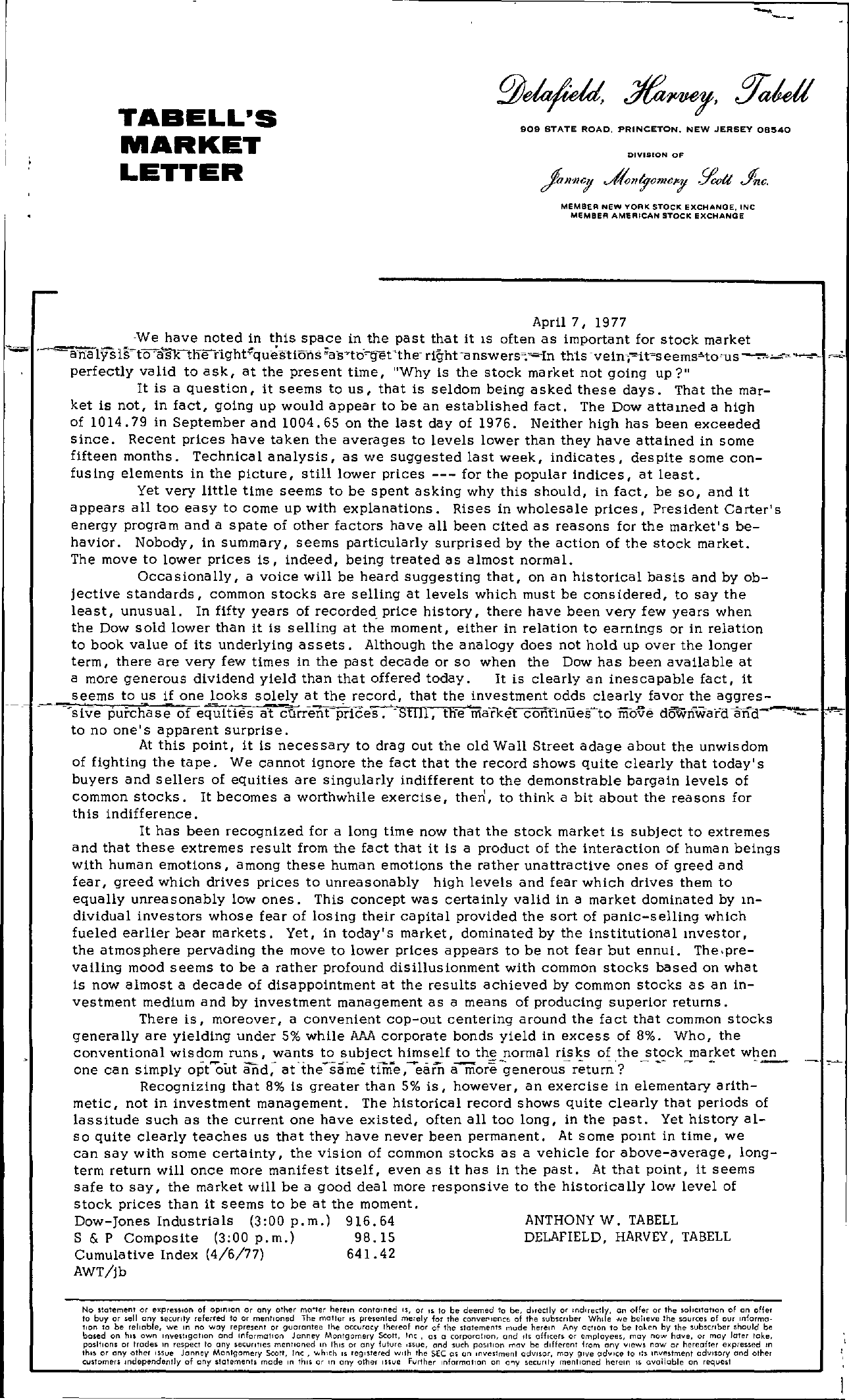 TABELL'S MARKET LETTER — 909 STATE ROAD, PRINCETON. NEW JERSEY 08540 DIVISION OF MEMBER NEW YORK STOCK EXCHANGe. INC MEMBER AMERICAN STOCK EXCHANGE April 7, 1977 We have noted in this space in the past that it 1S often as important for stock market – .'– . a'n'aC'IYs lsto 'a'slCtnerlghtquElstiotlS as7togetthe right'answersoIn this veln7it'Seemsto'us -'- perfectly valid to ask, at the present time, Why is the stock market not gOing up It is a question, it seems to us, that is seldom being asked these days. That the mar- ket is not, in fact, going up would appear to be an established fact. The Dow attamed a high of 1014.79 in September and 1004.65 on the last day of 1976. Neither high has been exceeded since. Recent prices have taken the averages to levels lower than they have attained in some fifteen months. Technical analysis, as we suggested last week, indicates, despite some con- fusing elements in the picture, still lower prices — for the popular indices, at least. Yet very little time seems to be spent asking why this should, in fact, be so, and it appears all too easy to come up with explanations. Rises in wholesale prices, President Carter's energy program and a spate of other factors have all been cited as reasons for the market's be- havior. Nobody, in summary, seems particularly surprised by the action of the stock market. The move to lower prices is, indeed, being treated as almost normal. Occasionally, a voice will be heard suggesting that, on an historical basis and by ob- jective standards, common stocks are selling at levels which must be considered, to say the least, unusual. In fifty years of recorded, price history, there have been very few years when the Dow sold lower than it is selling at the moment, either in relation to earnings or in relation to book value of its underlying assets. Although the analogy does not hold up over the longer term, there are very few times in the past decade or so when the Dow has been available at a more generous dividend yield than that offered today. It is clearly an inescapable fact, it seems to us if one looks solely at the record, that the investment odds clearly favor the aggressive purchas';- of eq-;'ities a1 currEmCpricet!l1, tllerna'eket conflnueino mOve dOwnwaraand–' — to no one's apparent surprise. At this paint, it is necessary to drag out the old Wall Street adage about the unwisdom of fighting the tape. We cannot ignore the fact that the record shows quite clearly that today's buyers and sellers of equities are singularly indifferent to the demonstrable bargain levels of common stocks. It becomes a worthwhile exercise, then, to think a bit about the reasons for this indifference. It has been recognized for a long time now that the stock market is subject to extremes and that these extremes result from the fact that it is a product of the interaction of human beings with human emotions, among these human emotions the rather unattractive ones of greed and fear, greed which drives prices to unreasonably high levels and fear which drives them to equally unreasonably low ones. This concept was certainly valid in a market dominated by m- dividual investors whose fear of losing their capital provided the sort of panic-selling which fueled earlier bear markets. Yet, in today's market, dominated by the institutional mvestor, the atmosphere pervading the move to lower prices appears to be not fear but ennui. The,pre- vailing mood seems to be a rather profound disillusionment with common stocks based on what is now almost a decade of disappointment at the results achieved by common stocks as an in- vestment medium and by investment management as a means of producing superior returns. There is, moreover, a convenient cop-out centering around the fact that common stocks generally are yielding under 5 while AAA corporate bonds yield in excess of 8. Who, the conventional wisdom runs, wants to subject himself to the normal risks of the stock market when one can simply optout and; atihesame tiiiie,-eam amorE';generous-return' -.. – – '- Recognizing that 8 is greater than 5 is, however, an exercise in elementary arith- metic, not in investment management. The historical record shows quite clearly that periods of lassitude such as the current one have existed, often all too long, in the past. Yet history al- so quite clearly teaches us that they have never been permanent. At Some pomt in time, we can say with some certainty, the vision of common stocks as a vehicle for above-average, long- term return will once more manifest itself, even as it has in the past. At that point, it seems safe to say, the market will be a good deal more responsive to the historically low level of stock prices than it seems to be at the moment. Dow-Jones Industrials (300 p.m.) 916.64 ANTHONY W. TABELL S & P Composite (300 p.m.) 98.15 DELAFIELD, HARVEY, TABELL Cumulative Index (4/6/77) 641.42 AWT/jb No statement or eKpreS510n of oplrllon or any other mo'ler herem contolned 1, or ' 10 be deemed to be, directly or mdlreclly, an offer or the soliCitation of on offer to buy or sell any security referred 10 or mentioned The malter ,s presented merely for the conVef'lenct. of the subscriber While e believe the sources of our Information to be reliable, we In no way repreent or guorantee the occuracy thereof nor of the statements mude herein Any OC'llon to be talen by the subscriber should be based on hl own Investigation ond Informotlon Janney Montgomery Scott, Inc. os 0 corporation, and Its offICers or employees, may now hOlle, or may later toke, positions or trades 111 respect to any securities mentioned In thiS or any future .ssue, and such pOltlon mav be different from any views now or hereafter expressed III th1 or any other ISSue Janney Montgomery Scott, Inc, ….. hlch IS registered With thc SEC as an IIlllestment odvlsor, may give adVice to '5 Investment adVisory and othel customers mdependently of any statement mode In thiS or In any other luue Further Information on o.,y security mentioned herein IS available on request