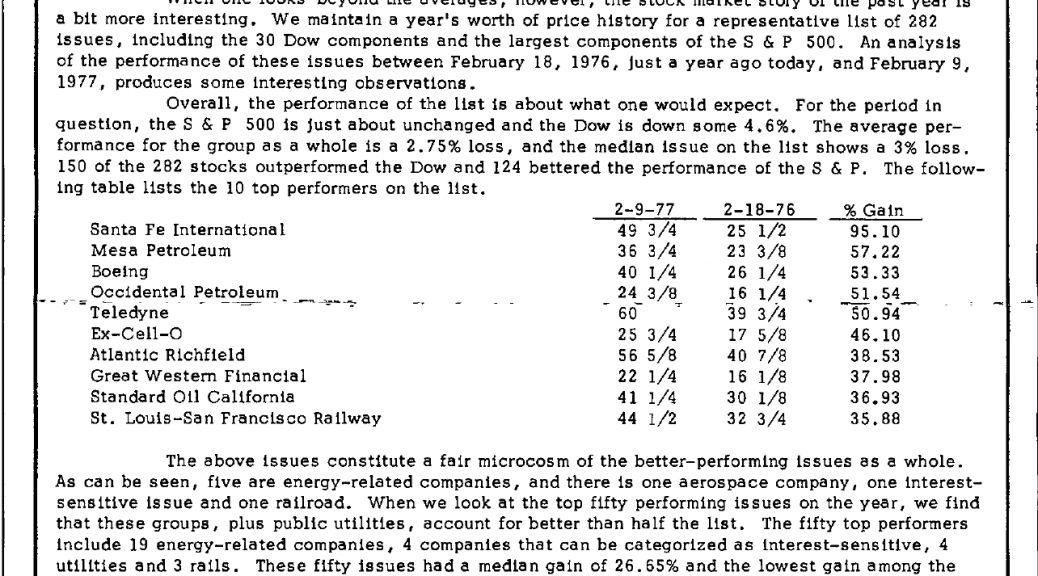 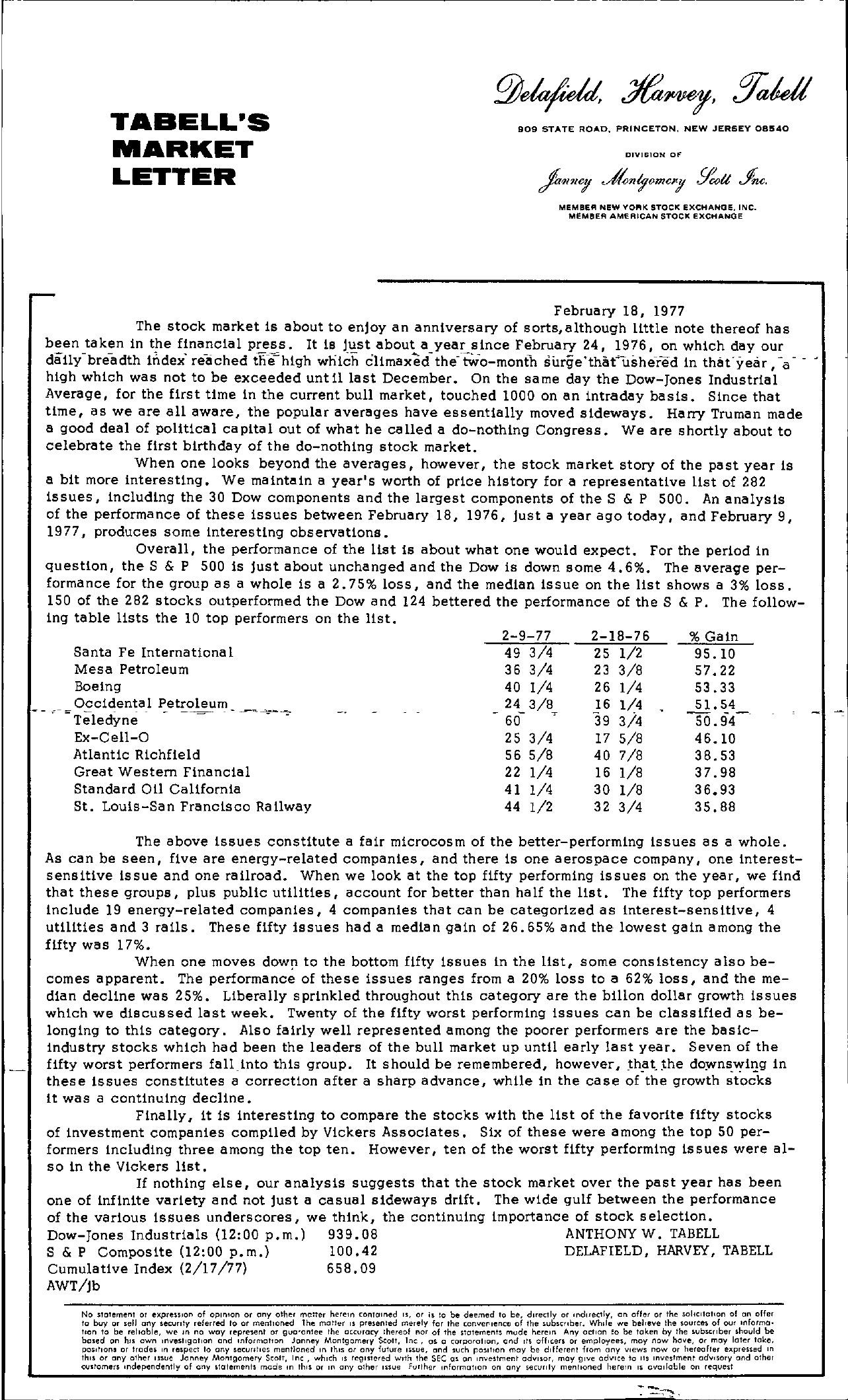 —————————————- —————- TABELL'S MARKET LETTER 909 STATE ROAD. PRINCETON. NEW JERSEY 081540 DIVISION OF MEMBER NEW YOPIK STOCK eXCHANOE. INC. MEMBER AMERICAN STOCK EXCHANQE February 18, 1977 The stock market is about to enjoy an anniversary of sorts,although little note thereof has been taken in the financial press. It is just about a year since February 24, 1976, on which day our daily-bre-adth index' reached th-ehlgh which climaxed-the't';io-month surge'thatushe'red in that-year, -a' , high which was not to be exceeded unt1l1ast December. On the same day the Dow-Jones Industrial Average, for the first time In the current bull market, touched 1000 on an intraday basis. Since that time, as we are all aware, the popular averages have essentially moved sideways. Harry Truman made a good deal of political capital out of what he called a do-nothing Congress. We are shortly about to celebrate the first birthday of the do-nothing stock market. When one looks beyond the averages, however, the stock market story of the past year is a bit more interesting. We maintain a year's worth of price history for a representative list of 282 Issues, including the 30 Dow components and the largest components of the S & P 500. An analysis of the performance of these issues between February 18, 1976, just a year ago today, and February 9, 1977, produces some interesting observations. Overall, the performance of the list is about what one would expect. For the period in question, the S & P 500 is just about unchanged and the Dow is down some 4.6. The average per- formance for the group as a whole is a 2.75 loss, and the median issue on the list shows a 3 loss. 150 of the 282 stocks outperformed the Dow and 124 bettered the performance of the S & P. The follow- ing table lists the 10 top performers on the list. 2-9-77 2-18-76 Gain Santa Fe International 49 3/4 25 1/2 95.10 Mesa Petroleum 36 3/4 23 3/8 57.22 Boeing Occidental Petroleum – – .- – Teledyne – —- – – -.—…— 40 1/4 24 3/8 60- 26 1/4 16 1/4 39 3i4 53.33 51.54 50.94- Ex-Cell-O 25 3/4 17 5/8 46.10 Atlantic Richfield 56 5/8 40 7/8 38.53 Great Western Financial 22 1/4 16 1/8 37.98 Standard Oil California 41 1/4 30 1/8 36.93 St. Louis-San Francisco RaHway 44 1/2 32 3/4 35.88 The above issues constitute a fair microcosm of the better-performing issues as a whole. As can be seen, five are energy-related companies, and there is one aerospace company, one interest- sensitive issue and one railroad. When we look at the top fifty performing issues on the year, we find that these groups, plus public utilities, account for better than half the list. The fifty top performers include 19 energy-related companies, 4 companies that can be categorized as interest-sensitive, 4 utilities and 3 rails. These fifty Issues had a median gain of 26.65 and the lowest gain among the fifty was 17. When one moves dow'! to the bottom fifty issues in the list, some consistency also be- comes apparent. The performance of these issues ranges from a 20 loss to a 62 loss, and the me- dian decline was 25. Liberally sprinkled throughout this category are the blllon dollar growth issues which we discussed last week. Twenty of the fifty worst performing issues can be classified as be- longing to this category. Also fairly well represented among the poorer performers are the basic- industry stocks which had been the leaders of the bull market up until early last year. Seven of the fifty worst performers fallinto this group. It should be remembered, however, th!'Uhe doymswi'!g in these issues constitutes a correction after a sharp advance, while in the case of the growth stocks it was a continuing decline. Finally, it is interesting to compare the stocks with the list of the favorite fifty stocks of investment companies compiled by Vickers Associates. Six of these were among the top 50 per- formers including three among the top ten. However, ten of the worst fifty performing issues were al- so In the Vickers list. If nothing else, our analysis suggests that the stock market over the past year has been one of infinite variety and not just a casual sideways drift. The wide gulf between the performance of the various issues underscores, we think, the continuing importance of stock selection. Dow-Jones Industrials (1200 p.m.) 939.08 ANTHONYW. TABELL S & P Composite (1200 p.m.) 100.42 DELAFIELD, HARVEY, TABELL Cumulative Index (2/17/77) 658.09 AWT/jb No statement 01 expreSSion of opinion or ony other mOler herem contolned IS, or is 10 be deemed 10 be, directly or 'I'\dlrectly, on offer or the oll(llollon of on offer 10 buy or sell ony security referred 10 or menl10ned The molter IS presented merely for Ihe convellenaJ of the sub5trlber. While we beheve Ihe 50Uroo of our Informa lion to be reliable, we 10 no way represent or guo'onlee the accuracy thereof nor of the statements mude herein Any action to be token by the ubscflber should be bosed on hiS own Invetlgotlon and Informotlon Jonney Montgomery Scoll, Inc, as a corporation, and Its officers or employees, may now hoye, or may later toke, positions or trades In respect to any seCUrities mentloned In thiS or any future Issue, and such poslhon may be different from any views now or hereafter expressed In th or any oiher Issue Janney Montgomery Scott, Inc, which IS regiSTered With the SEC as an Investment adVisor, may give adVice to lIs Investment adYlsory and other customers mdependently of any statements mode m thiS or In any other Issue Furlher information on any seC1.lfIty mentioned herem IS available on request