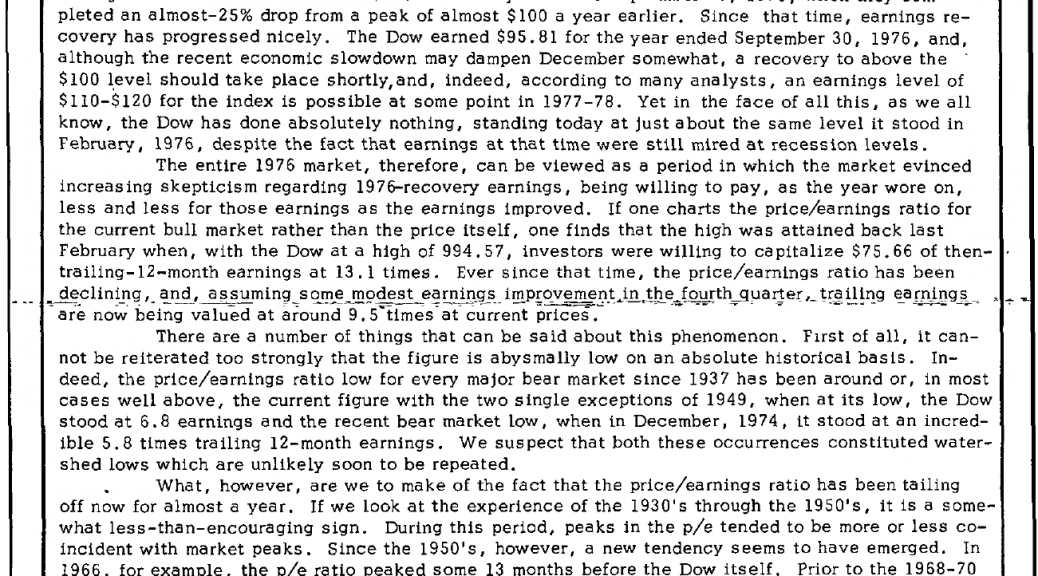 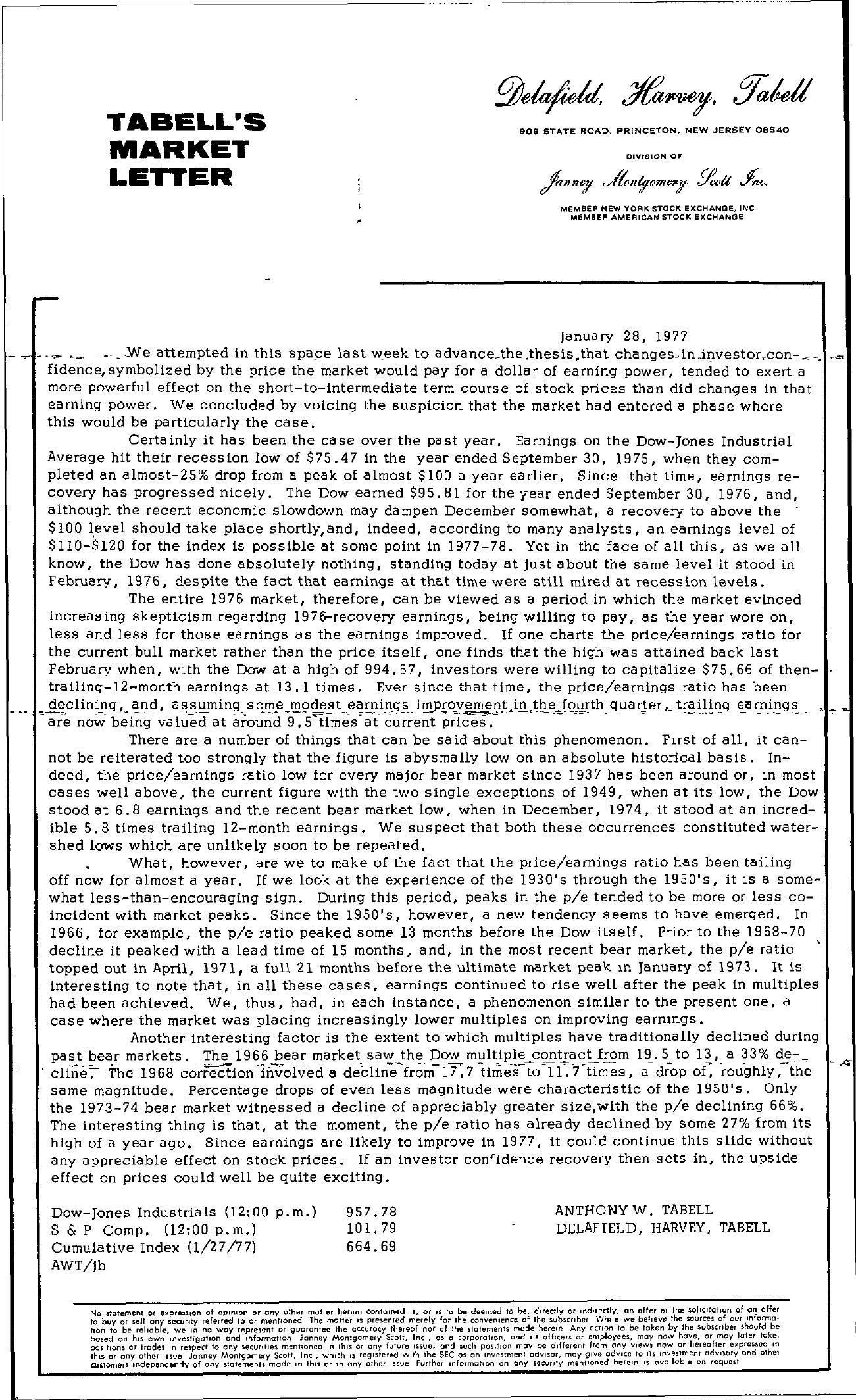 TABELL'S MARKET LETTER 909 STATE ROAD, PRtNCE1'ON. NEW JERSEY 08540 DIVISION OF MEMBER NEW YORK STOCK EXCHANGE, INC MEMBER AMERICAN STOCK EXCHANGE January 28, 1977 – , .-We attempted in this space last w.eek to advancethe.thesis.that changesin.itlvestorcon- -. fidence, symbolized by the price the market would pay for a dolla r of earning power, tended to exert a more powerful effect on the short-to-intermediate term course of stock prices than did changes in that earning power. We concluded by VOicing the suspicion that the market had entered a phase where this would be particularly the case, Certainly it has been the case over the past year. Earnings on the Dow-Jones Industrial Average hit their recession low of 75.47 in the year ended September 30, 1975, when they com- pleted an almost-25 drop from a peak of almost 100 a year earlier. Since that time, earnings re- covery has progressed nicely. The Dow earned 95.81 for the year ended September 30, 1976, and, although the recent economic slowdown may dampen December somewhat, a recovery to above the 100 level should take place shortlY,and, indeed, according to many analysts, an earnings level of 110-120 for the index is possible at some point in 1977-78. Yet in the face of all this, as we all know, the Dow has done absolutely nothing, standing today at just about the same level it stood in February, 1976, despite the fact that earnings at that time were still mired at recession levels. The entire 1976 market, therefore, can be viewed as a period in which the market evinced increasing skepticism regarding 1976-recovery earnings, being willing to pay, as the year wore on, less and less for those earnings as the earnings improved. If one charts the price/earnings ratio for the current bull market rather than the price itself, one finds that the high was attained back last February when, with the Dow at a high of 994.57, investors were willing to capitalize 75.66 of then- tra!ling-12-month earnings at 13.1 times. Ever since that time, the price/earnings ratio has been declining, and, assuming some modest earnings improvement)n thejourth…9uarter,.tr'liling earrj!I9e.. – are no;'; bi;;gvalued at a;0-;;d9—5timesat cue;;t pices .- –.- — . – – – — . – . — — There are a number of things that can be said about this phenomenon. Fust of all, it cannot be reiterated too strongly that the figure is abysmally low on an absolute historical basis. Indeed, the price/earnings ratio low for every major bear market since 1937 has been around or, in most cases well above, the current figure with the two single exceptions of 1949, when at its low, the Dow stood at 6,8 earnings and the recent bear market low, when in December, 1974, it stood at an incredible 5.8 times trailing 12-month earnings. We suspect that both these occurrences constituted water- shed lows which are unlikely soon to be repeated. What, however, are we to make of the fact that the price/earnings ratio has been tailing off now for almost a year. If we look at the experience of the 1930' s through the 1950's, it is a somewhat less-than-encouraging sign. During this period, peaks in the pie tended to be more or less coincident with market peaks. Since the 1950's, however, a new tendency seems to have emerged. In 1966, for example, the pie ratio peaked some 13 months before the Dow itself. Prior to the 1968-70 decline it peaked with a lead time of 15 months, and, in the most recent bear market, the pie ratio topped out in April, 1971, a full 21 months before the ultimate market peak m January of 1973. It is interesting to note that, in all these cases, earnings continued to rise well after the peak in multiples had been achieved. We, thus, had, in each instance, a phenomenon similar to the present one, a case where the market was placing increasingly lower multiples on improving earmngs. Another interesting factor is the extent to which multiples have traditionally declined during past bear markets. The 1966 bear market saw the Dow multipleco..n!!actrom 19.5 to 13, a 33. de- – cline— The 1968 corr-eCtioniilvolV-ed a decline-froin-I77-tiestolr.7'iimes, a drop of; -roughly;-the same magnitude. Percentage drops of even less magnitude were characteristic of the 1950's. Only the 1973-74 bear market witnessed a decline of appreciably greater size,with the pie declining 66. The interesting thing is that, at the moment, the pie ratio has already declined by some 27 from its high of a year ago. Since earnings are likely to improve in 1977, it could continue this slide without any appreciable effect on stock prices. If an investor conridence recovery then sets in, the upside effect on prices could well be quite exciting. Dow-Jones Industrials (1200 p.m.) S & P Compo (1200 p.m.) Cumulative Index (1/27/77) AWT/Jb 957.78 101.79 664.69 ANTHONY W. TABELL DELAFIELD, HARVEY, TABELL No statement or expreulon of opinion or any other matler herein conlalned IS, or IS to be deemed to be, dorectly or indirectly, an offer or the 50llCilOlion of an offer 10 buy or sell onr. security referred to or mentioned The matter IS presented merely for the canvellence of the subscriber While we belieVe the sources of our informaTion to be rei lab e, we In no way represent or guarantee the accuracy thereof nor af the statements mude herein Any adlon to be taken by Ihe subSCriber should be based on hiS own InvestigatIOn and Informallon Janney Montgomery Scott, Inc, oS a corpora lion, and lIS officers Of employee, may now have, or may later toke, positions or trades In respect to any seCUrities mentIOned In thiS or any future Issue, and such POSition may be different from any views now or hereafter e)fpressed In thiS or any other Issue Janney Montgomery Scott, Inc, which IS registered With the SEC as on Investment adVisor, may give adVice 10 115 If\vestment adVisory and C1thel customers Independently of any statements mode In thiS or In any other Issue Further infOrmatIOn on any seaJflty mentIOned hcraln IS available on requaSI