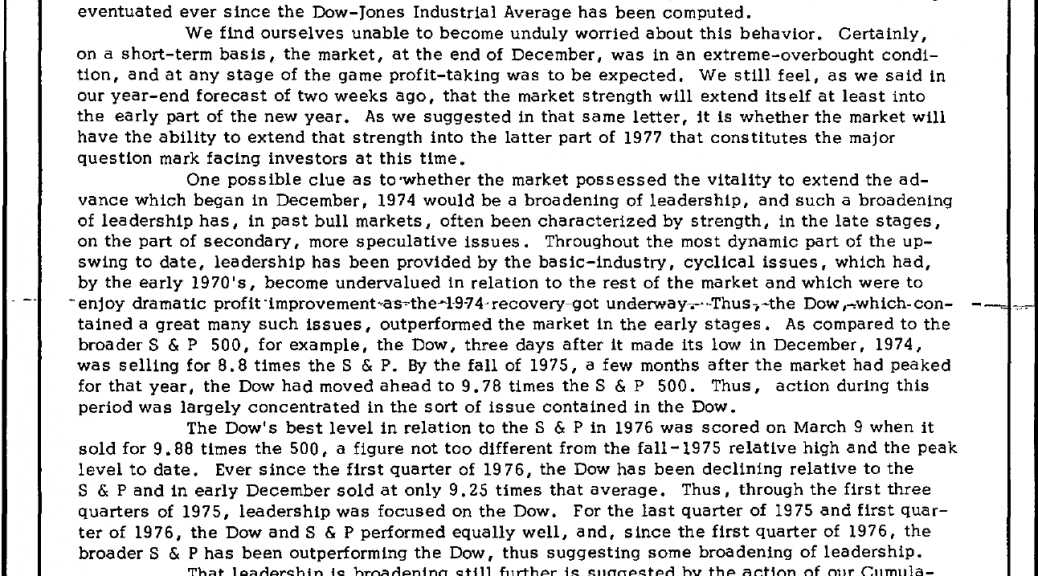 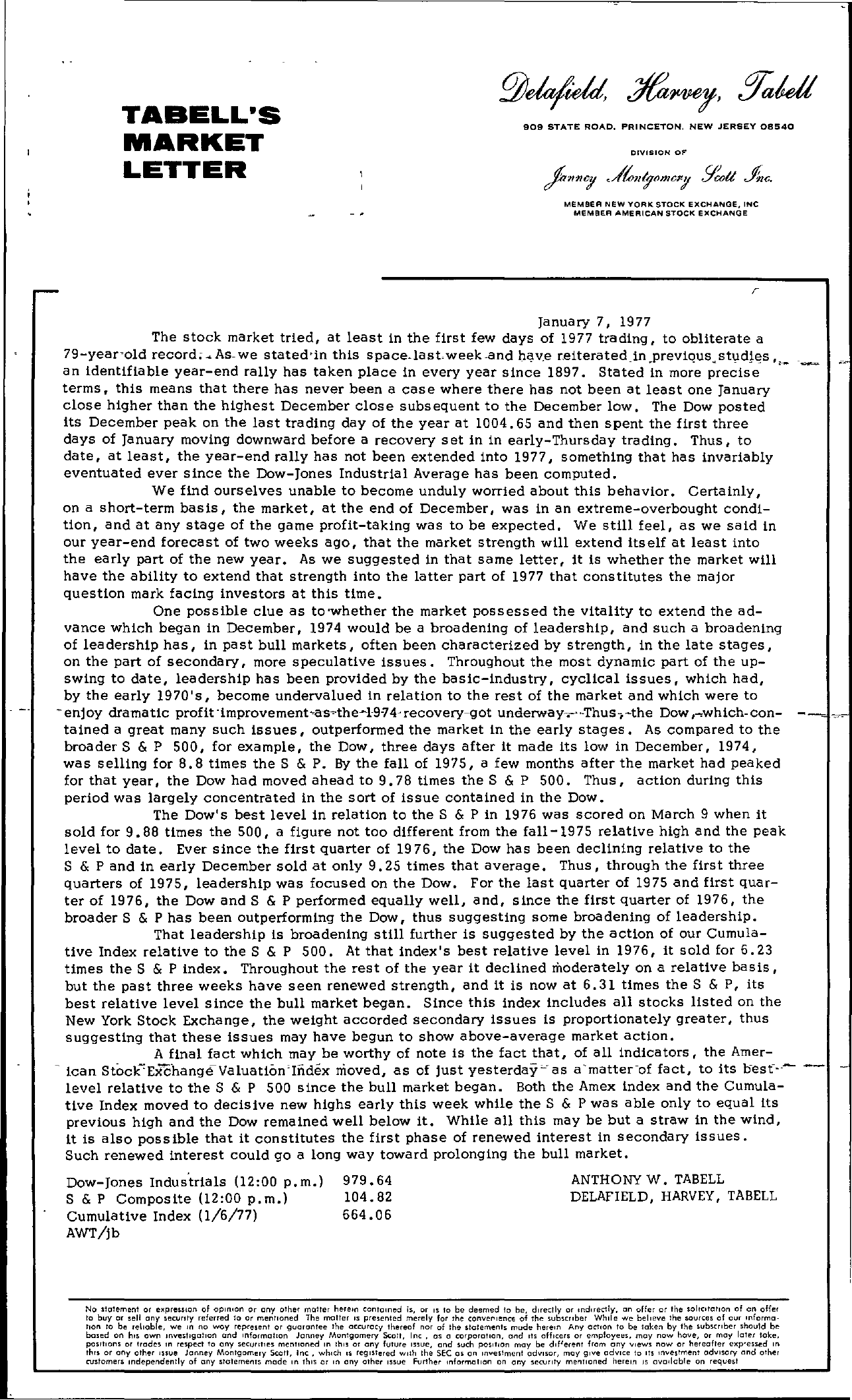 TABELL'S MARKET LETTER 909 STATE ROAD. PRINCETON, NEW JERSEY 08540 DIVISION OF MEMBER NEW YORK STOCK EXCHANGE, INC MEMBER AMERICAN STOCK EXCHANGE r January 7, 1977 The stock market tried, at least in the first few days of 1977 trading, to obliterate a 79-year01d record;. As we stated'in this space-last.week -and hav,e r,eiteratedin previqusstudes, an identifiable year-end rally has taken place in every year since 1897. Stated in more precise terms, this means that there has never been a case where there has not been at least one January close higher than the highest December close subsequent to the December low. The Dow posted its December peak on the last trading day of the year at 1004.65 and then spent the first three days of January moving downward before a recovery set in in early-Thursday trading. Thus, to date, at least, the year-end rally has not been extended into 1977, something that has invariably eventuated ever since the Dow-Jones Industrial Average has been computed. We find ourselves unable to become unduly worried about this behavior. Certainly, on a short-term basis, the market, at the end of December, was in an extreme-overbought condition, and at any stage of the game profit-taking was to be expected. We still feel, as we said in our year-end forecast of two weeks ago, that the market strength will extend itself at least into the early part of the new year. As we suggested in that same letter, it is whether the market will have the ability to extend that strength into the latter part of 1977 that constitutes the major question mark facing investors at this time. One possible clue as to 'Whether the market possessed the vitality to extend the advance which began in December, 1974 would be a broadening of leadership, and such a broadening of leadership has, in past bull markets, often been characterized by strength, in the late stages, on the part of secondary, more speculative issues. Throughout the most dynamic part of the upswing to date, leadership has been provided by the basic-industry, cyclical issues, which had, by the early 1970's, become undervalued in relation to the rest of the market and which were to -enjoy dramatic profit'improvement-a-s-the1-9-74- recovery-got underwaYT'Thus-,-the Dow ,which-con tained a great many such issues, outperformed the market in the early stages. As compared to the broader S & P 500, for example, the Dow, three days after it made its low in December, 1974, was selling for 8.8 times the S & P. By the fall of 1975, a few months after the market had peaked for that year, the Dow had moved ahead to 9.78 times the S & P 500. Thus, action during this period was largely concentrated in the sort of issue contained in the Dow. The Dow's best level in relation to the S & P in 1976 was scored on March 9 when it sold for 9.88 times the 500, a figure not too different from the fall-1975 relative high and the peak level to date. Ever since the first quarter of 1976, the Dow has been declining relative to the S & P and in early December sold at only 9.25 times that average. Thus, through the first three quarters of 1975, leadership was focused on the Dow. For the last quarter of 1975 and first quarter of 1976, the Dow and S & P performed equally well, and, since the first quarter of 1976, the broader S & P has been outperforming the Dow, thus suggesting some broadening of leadership. That leadership is broadening still further is suggested by the action of our Cumulative Index relative to the S & P 500. At that index's best relative level in 1976, it sold for 6.23 times the S & P index. Throughout the rest of the year it declined moderately on a relative basiS, but the past three weeks have seen renewed strength, and it is now at 6.31 times the S & P, its best relative level since the bull market began. Since this index includes all stocks listed on the New York Stock Exchange, the weight accorded secondary issues is proportionately greater, thus suggesting that these issues may have begun to show above-average market action. A final fact which may be worthy of note is the fact that, of all indicators, the Amer- ican Stock'EXChangeValuatlon-liidex moved, as of just yesterdayc- as a-matter-of fact, to its nesr— level relative to the S & P 500 since the bull market began. Both the Amex index and the Cumulative Index moved to decisive new highs early this week while the S & P was able only to equal its previous high and the Dow remained well below it. While all this may be but a straw in the wind, it is also possible that it constitutes the first phase of renewed interest in secondary issues. Such renewed interest could go a long way toward prolonging the bull market. Dow-Jones Indus'trials (1200 p.m.) S & P Composite (1200 p.m.) Cumulative Index (1/6/77) AWT/jb 979.64 104.82 664.06 ANTHONY W. TABELL DELAFIELD, HARVEY, TABELL No statement or expreSSion of opinion Or any other matler herem contolned is, or IS 10 be deemed 10 be, directly or mdnec1ly, on offer Of the sohcltatlon of on oHer to buy or sell ony ecurlty referred to or mentioned The motler IS presented merely for Ihe convef'lence of the subscriber While we believe Ihe sources of our mformo- lion to b!! fellabl!!, we In no way r!!pres!!nl or guarantee the accuracy thereof nor of the statements mude herem Any action to be token by Ihe subscriber should be hosed on hiS own IOv!!sllgatlon and Informallon Janney Montgomery Seott, Inc. as a corporation, and Its officers or employees, may now have, or may laler toke, pOSitions or Irades In respect to any securities mentioned m thiS or any future Issue, and such position may be different from any views now or hereatrer exp'essed m thiS or any other usue Janney Montgom!!ry Scott, Inc, which IS registered with the SEC oS on mvestment adVisor, may give adVice to Its investment adVISOry and athel customers independently of any Ualemems mode In IhlS Of In any other Issue Further information on any secuflty mentioned herein IS available on request