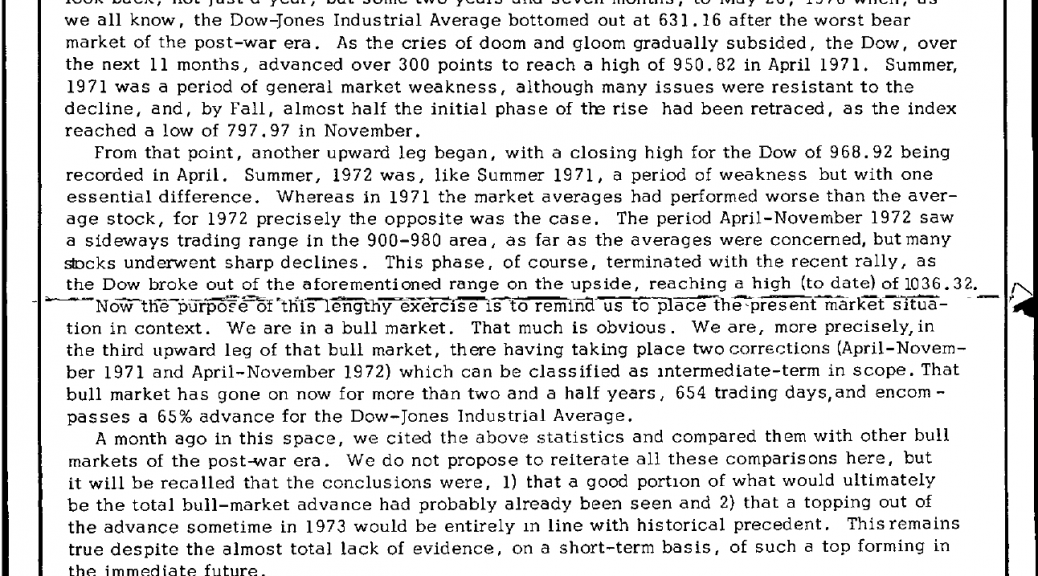 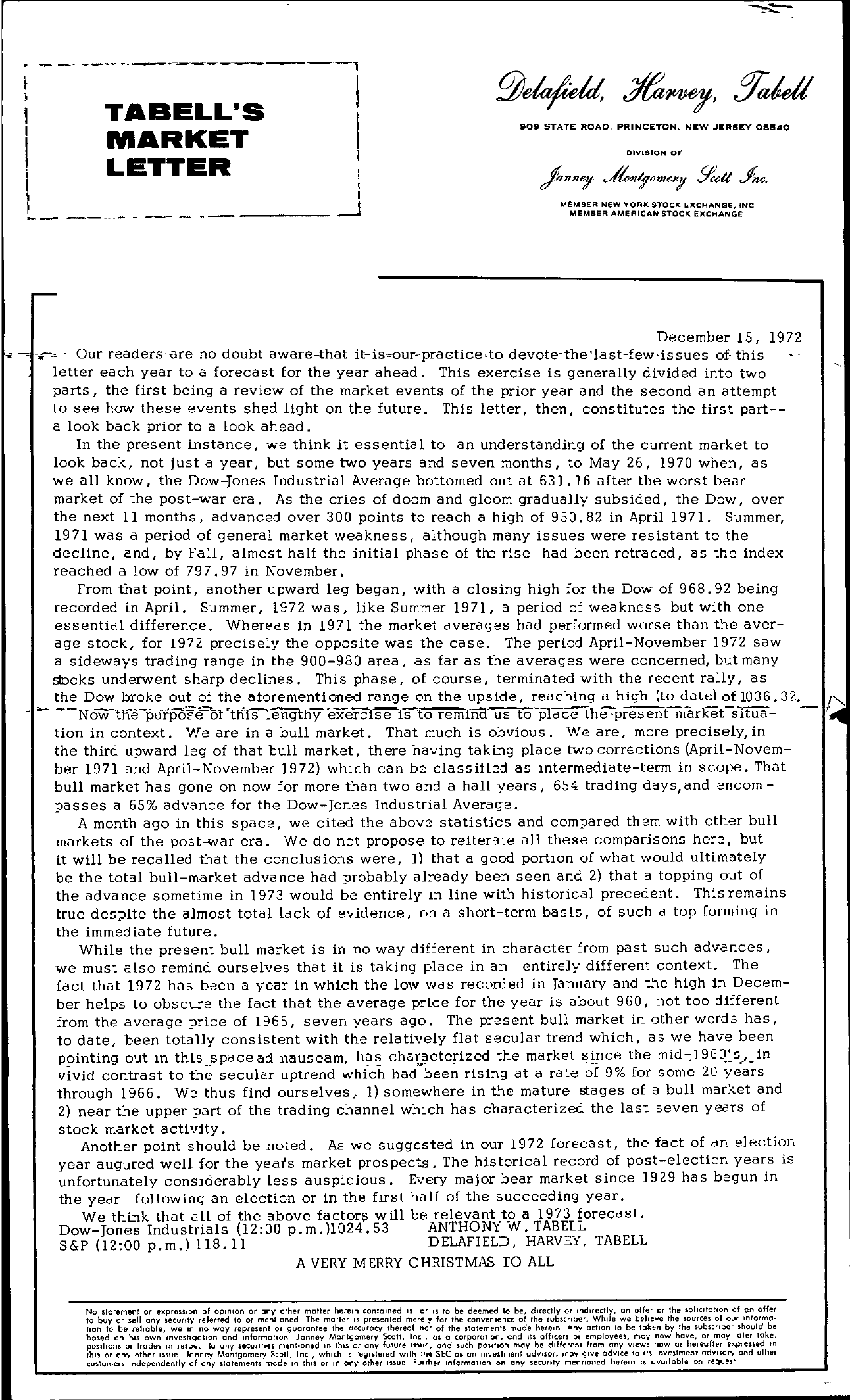 .- — — — ———–'——–l j ! TABELL'S II MARKET LETTER I I , \ .. .-JI 909 STATE ROAD, PRINCETON, NEW JERSEY 08640 DIVISION O'F MEMBER NEW YORk STOCK EXCHANGE, INC MEMBER AMERICAN STOCK EXCHANGE December 15, 1972 ..- –;;-. Our readers-are no doubt aware-that it-isour-practice.to devote-the'last-few'issues of. this letter each year to a forecast for the year ahead. This exercise is generally divided into two parts, the first being a review of the market events of the prior year and the second an attempt to see how these events shed light on the future. This letter, then, constitutes the first part– a look back prior to a look ahead. In the present instance, we think it essential to an understanding of the current market to look back, not just a year, but some two years and seven months, to May 26, 1970 when, as we all know, the Dow-Jones Industrial Average bottomed out at 631.16 after the worst bear market of the post-war era. As the cries of doom and gloom gradually subsided, the Dow, over the next 11 months, advanced over 300 points to reach a high of 950.82 in April 1971. Summer, 1971 was a period of general market weakness, although many issues were resistant to the decline, and, by Fall, almost half the initial phase of the rise had been retraced, as the index reached a low of 797.97 in November. From that point, another upward leg began, with a closing high for the Dow of 968.92 being recorded in April. Summer, 1972 was, like Summer 1971, a period of weakness but with one essential difference. Whereas in 1971 the market averages had performed worse than the aver- age stock, for 1972 precisely the opposite was the case. The period April-November 1972 saw a sideways trading range in the 900-980 area, as far as the averages were concerned, but many stocks underwent sharp declines. This phase, of course, terminated with the recent rally, as c. the D b…'''.k-te,..!..oention.on the .upside, reag .!..high (to ate) of 036. 32. f'. r…Now tile purpofe of tillS lengtny exerClse lS to remlOO US to place the-present marKet sltua tion in context. We are in a bull market. That much is obvious. We are, more preCisely, in the third upward leg of that bull market, there having taking place two corrtctions (April-Novem- ber 1971 and April-November 1972) which can be classified as mtermediate-term in scope. That bull market has gone on now for more than two and a half years, 654 trading days,and encom- passes a 65 advance for the Dow-Jones Industrial Average. A month ago in this space, we cited the above statistics and compared them with other bull markets of the post-war era. We do not propose to reiterate all these comparisons here, but it will be recalled that the conclusions were, 1) that a good portlOn of what would ultimately be the total bull-market advance had probably already been seen and 2) that a topping out of the advance sometime in 1973 would be entirely m line with historical precedent. This remains true despite the almost total lack of evidence, on a short-term basis, of such a top forming in the immediate future. While the present bull market is in no way different in character from past such advances, we must also remind ourselves that it is taking place in an entirely different context. The fact that 1972 has been a year in which the low was recorded in January and the high in Decem- ber helps to obscure the fact that the average price for the year is about 960, not too different from the average price of 1965, seven years ago. The present bull market in other words has, to date, been totally consistent with the relatively flat secular trend which, as we have been P9inting out m this.spacead.nauseam, ha chatacterized the market i!1ce the mid-1960's,,in vivid contrast to the secular uptrend which had been rising at a rate of 9 for some 20 years through 1966. We thus find ourselves, 1) somewhere in the mature stages of a bull market and 2) near the upper part of the trading channel which has characterized the last seven years of stock market activity. Another point should be noted. As we suggested in our 1972 forecast, the fact of an election year augured well for the yeats market prospects. The historical record of post-election years is unfortunately conslderably less auspicious. Every major bear market since 1929 has begun in the year following an election or in the hrst half of the succeeding year. We think that all of the above factors will be relevant to a 1973 forecast. Dow-Jones Industrials (1200 p.m.)l024.53 ANTHONYW. TAB ELL S&P (1200 p.m.) 118.11 DELAFIELD, HARVEY, TABELL A VERY MERRY CHRISTMAS TO ALL No statement or expreUlon of opmlon or any other matter herem tontclned IS, or , to be deemed to be, dlrettly or mdlrectly, on offer or the lollcltotlon of on offer to buy or sell any security referred to or mentioned The matter IS presented merely for the converlente of the subscrlber While we beheve the sources of our mformatlon to be reliable, we m no way represent or guarantee the o'Curccy thereof nor of the statements mude herem Any oct,on to be taken by the subscrtber should be based on hiS own mveshgotlon and information Janney Montgomery Seall, Inc, 0 a corporOllon, and Its officers or employees, may now have, or may later toke, POSitions or trades m respect to any seurtt,es mentioned In th,s or any future Iswe, and such postllon may be different from any views now or hereafter expressed m thIS or any other Issue Janney Montgomery Scolt, Inc, whIch IS regIstered With the SEC os on Investment adVIsor, may gIve odvlce to ,1 mvestment adVisory and othe, customers Independently of any statements mode m thIS or m ony other Issue Further InformatIon on ony security mentioned herein 1 avadoble on request