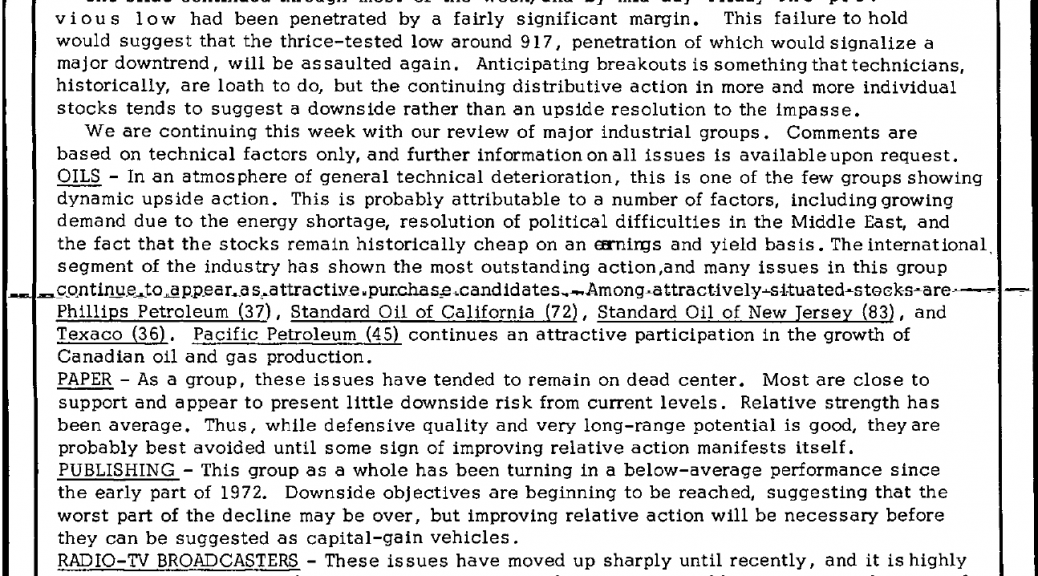 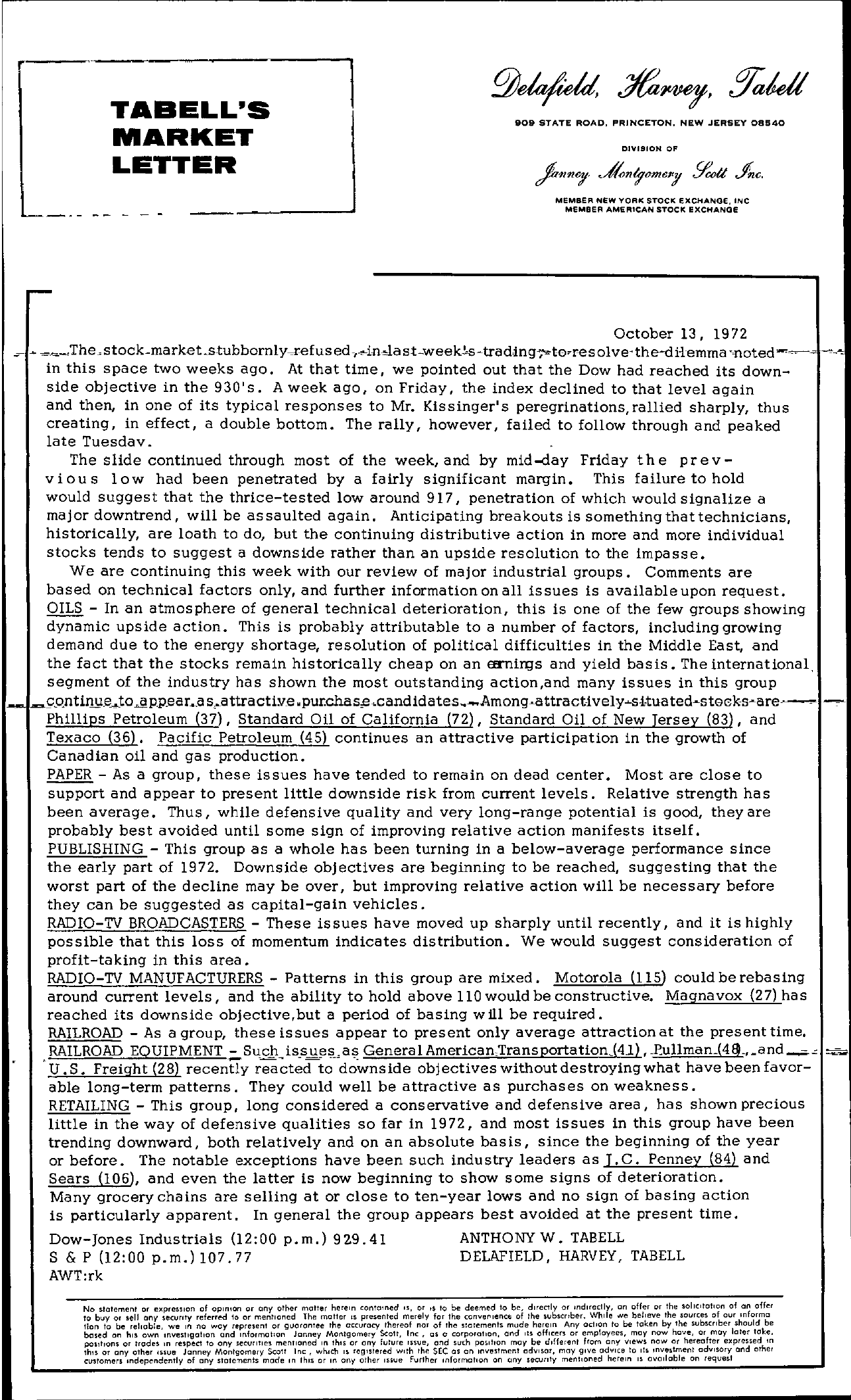 TABELL'S MARKET LETTER 909 STATE ROAD, PRINCETON, NEW JERSEY 08540 DIVISION OF MEMBER NEW YORK STOCK EXCHANGE, INC MEMBER AMERICAN STOCK EXCHANGE October 13, 1972 – The, stockmarket stubbornlYlefus ed,.,.inla st-week1s-tradIng7to,resolve- the.-,j i-lemma noted – – in this space two weeks ago. At that time, we pOinted out that the Dow had reached its downside objective in the 930's. A week ago, on Friday, the index declined to that level again and then, in one of its typical responses to Mr. Kissinger's peregrinations, rallied sharply, thus creating, in effect, a double bottom. The rally, however, failed to follow through and peaked late Tuesdav. The slide continued through most of the week, and by mid-clay Friday the pre vvi ou s low had been penetrated by a fairly significant margin. This failure to hold would suggest that the thrice-tested low around 917, penetration of which would signalize a major downtrend, will be assaulted again. Anticipating breakouts is somethingthattechnicians, historically, are loath to do, but the continuing distributive action in more and more individual stocks tends to suggest a downSide rather than an upside resolution to the impasse. We are continuing this week with our review of major industrial groups. Comments are based on technical factors only, and further information on all issues is available upon request. OILS – In an atmosphere of general technical deterioration, this is one of the few groups showing dynamic upside action. This is probably attributable to a number of factors, including growing demand due to the energy shortage, resolution of political difficulties in the Middle East, and the fact that the stocks remain historically cheap on an fI'TliI1s and yield basis. The international, segment of the industry has shown the most outstanding action,and many issues in this group 9,QntinJ,letopp.earasattractiye.pur.chas,e-.candidatesAmongattractlvely-sHuatedst0C';sare- Phillips Petroleum (37), Standard Oil of California (72), Standard Oil of New Jersey (83), and Texaco (36). Pacific Petroleum (45) continues an attractive participation in the growth of Canadian oil and gas production. PAPER – As a group, these issues have tended to remain on dead center. Most are close to support and appear to present little downside risk from current levels. Relative strength has been average. Thus, while defensive quality and very long-range potential is good, they are probably best avoided until some sign of improving relative action manifests itself. PUBLISHING – This group as a whole has been turning in a below-average performance since the early part of 1972. Downside objectives are beginning to be reached, suggesting that the worst part of the decline may be over, but improving relative action will be necessary before they can be suggested as capital-gain vehicles. RADIO-TV BROADCASTERS – These issues have moved up sharply until recently, and it is highly possible that this loss of momentum indicates distribution. We would suggest consideration of profit-taking in this area. RADIO-TV MANUFACTURERS – Patterns in this group are mixed. Motorola (115) couldberebasing around current levels, and the ability to hold above 110 would be constructive. Magnavox (27) has reached its downside objective,but a period of basing w ill be required. RAILROAD – As a group, these issues appear to present only average attraction at the present time. RAILROAD EQUIPMENT – Such issues,as General American,Transportation(4J), Jullman(4!Land …;;.. 'U . S. Freight (28) recently retd i–dwnside objectives without destroying what have been favorable long-term patterns. They could well be attractive as purchases on weakness. RETAILING – This group, long considered a conservative and defensive area, has shown precious little in the way of defensive qualities so far in 1972, and most issues in this group have been trending downward, both relatively and on an absolute basis, since the beginning of the year or before. The notable exceptions have been such industry leaders as 1. C. Penney (84) and Sears (106), and even the latter is now beginning to show some signs of deterioration. Many grocery chains are selling at or close to ten-year lows and no sign of basing action is particularly apparent. In general the group appears best aVOided at the present time. Dow-Jones Industrials (1200 p.m.) 929.41 S & P (1200 p.m.) 107.77 AWTrk ANTHONYW. TAB ELL DELAFIELD, HARVEY, TABELL No statement or expression of opinion or any otner motter herein contained IS, or . 10 be deemed to be, directly or mdlrectly, on offer or the sollcltallon of an offer to bvy or sell any secunty referred to or mentioned The motter IS presented merely for the conver'lence of the subSCriber. While we believe the sources of our Informa lion to be reliable, we In no way represent or guarantee the accuracy thereof nor of the statements mude herein Any actIOn to be token by the subSCriber should be based on hiS own investigation and Informollon Janney Montgomery Scott, Inc, as 0 corporation, and lIs officers or employees, may now have, or may later toke, positions or trades In respect to any ecurltles menlloned In thiS or any luture Issue, and such pOSition may be different from any views now or hereafter expressed In thn or ony other Issue Janney Montgomery Scott Inc, which 15 registered With the SEC as an Investment adVisor, may give adVice to Its Investment odvlsory and othel customers Independently of any stateTients mode In thiS or 11'1 any other Issue Further information on any security mentIOned herem IS avalloble on request