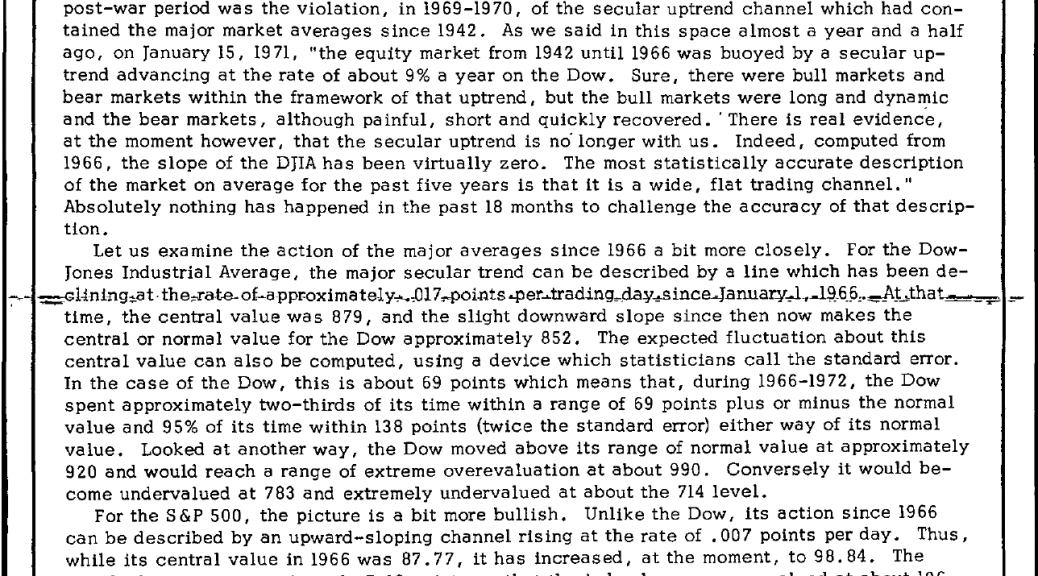 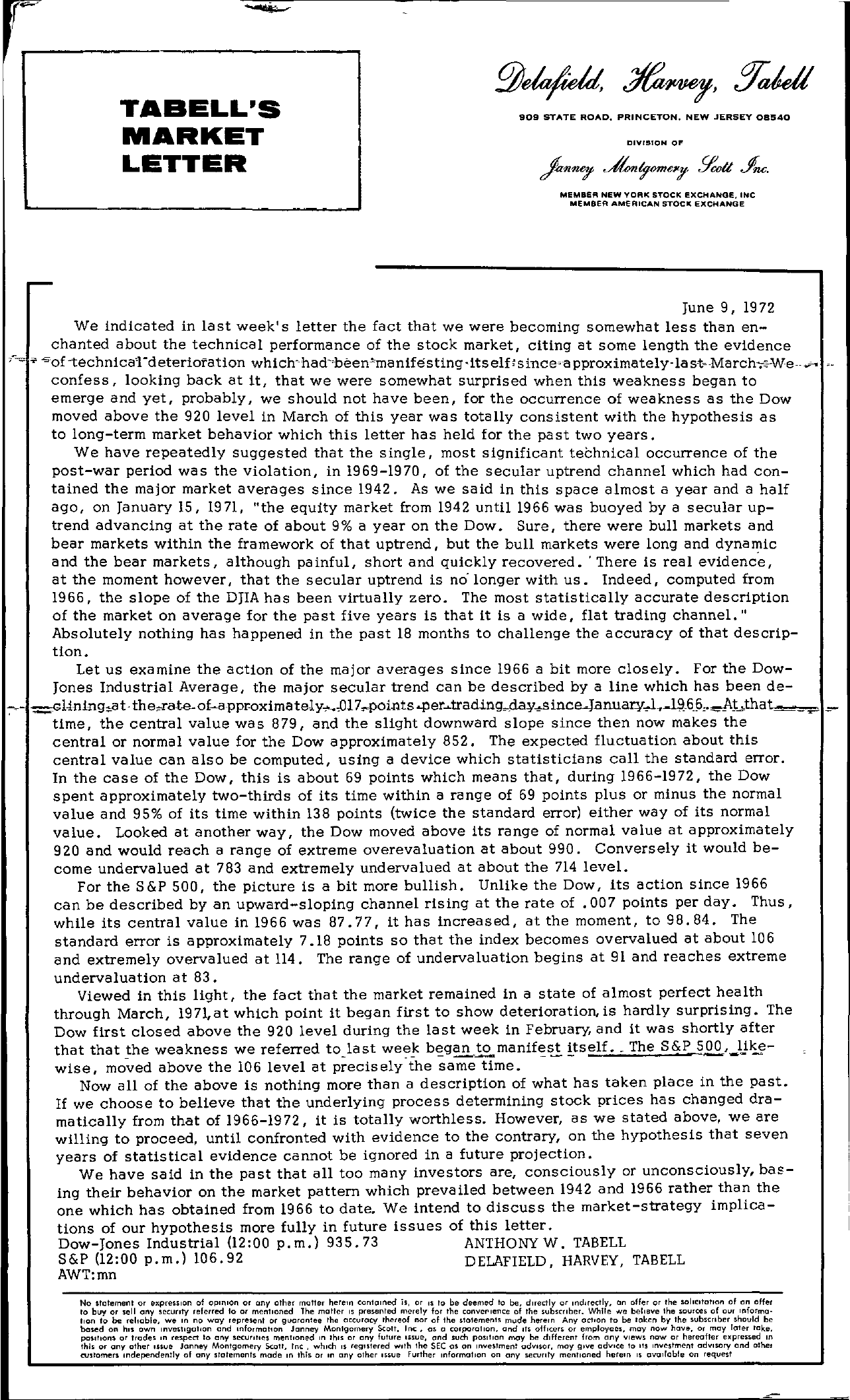 .. .t; TABELL'S MARKET LETTER 909 STATE ROAD, PRINCETON, NEW .JERSEY 08540 DIVISION OF MEMBER NEW YORK STOCK EXCHANGE, INC MEMBER AMERICAN STOCK EXCHANGE June 9, 1972 We indicated in last week's letter the fact that we were becoming somewhat less than en- chanted about the technical performance of the stock market, citing at some length the evidence ,- .. of 1echnicardeterioration which-had-beenmanifesting its elf'since'a pproximately-la stMarch7-We -' confess, looking back at it, that we were somewhat surprised when this weakness began to emerge and yet, probably, we should not have been, for the occurrence of weakness as the Dow moved above the 920 level in March of this year was totally consistent with the hypothesis as to long-term market behavior which this letter has held for the past two years. We have repeatedly suggested that the single, most significant technical occurrence of the post-war period was the violation, in 1969-1970, of the secular uptrend channel which had con- tained the major market averages since 1942. As we said in this space almost a year and a half ago, on January 15, 1971, the equity market from 1942 until 1966 was buoyed by a secular up- trend advancing at the rate of about 9 a year on the Dow. Sure, there were bull markets and bear markets within the framework of that uptrend, but the bull markets were long and dynamic and the bear markets, although painful, short and quickly recovered .. There is real eVidence, at the moment however, that the secular uptrend is no longer with us. Indeed, computed from 1966, the slope of the DJIA has been virtually zero. The most statistically accurate description of the market on average for the past five years is that it is a wide, flat trading channel. Absolutely nothing has happened in the past 18 months to challenge the accuracy of that descrip- tion. Let us examine the action of the major averages since 1966 a bit more closely. For the Dow- Jones Industrial Average, the major secular trend can be described by a line which has been de- Gl4ningat the,ate-ofapproximatelYo',,017points .pertradingday..since..Jilnuaryo'L,16Ji,.P.t,that .,,- time, the central value was 879, and the slight downward slope since then now makes the central or normal value for the Dow approximately 852. The expected fluctuation about this central value can also be computed, using a device which statisticians call the standard error. In the case of the Dow, this is about 69 pOints which means that, during 1966-1972, the Dow spent approximately two-thirds of its time within a range of 69 points plus or minus the normal value and 95 of its time within 138 points (twice the standard error) either way of its normal value. Looked at another way, the Dow moved above its range of normal value at approximately 920 and would reach a range of extreme overevaluation at about 990. Conversely it would be- come undervalued at 783 and extremely undervalued at about the 714 level. For the S &P 500, the picture is a bit more bullish. Unlike the Dow, its action since 1966 can be described by an upward-sloping channel riSing at the rate of .007 points per day. Thus, while its central value in 1966 was 87.77, it has increased, at the moment, to 98.84. The standard error is approximately 7.18 points so that the index becomes overvalued at about 106 and extremely overvalued at 114. The range of undervaluation begins at 91 and reaches extreme undervaluation at 83. Viewed in this light, the fact that the market remained in a state of almost perfect health through March, 1971,at which point it began first to show deterioration, is hardly surprising. The Dow first closed above the 920 level during the la st week in February, and it was shortly after —– —that that -the weakness we referred to-last week .- began to – manifest itself. The – S&P 500. IJ- wise, moved above the 106 level at precisely the same time. Now all of the above is nothing more than a description of what has taken place in the past. If we choose to believe that the underlying process determining stock prices has changed dra- matically from that of 1966-1972, it is totally worthless. However, as we stated above, we are willing to proceed, until confronted with evidence to the contrary, on the hypothesis that seven years of statistical eVidence cannot be ignored in a future projection. We have said in the past that all too many investors are, consciously or unconsciously, bas- ing their behavior on the market pattern which prevailed between 1942 and 1966 rather than the one which has obtained from 1966 to date. We intend to discuss the market-strategy implica- tions of our hypothesis more fully in future issues of this letter. Dow-Jones Industrial (1200 p.m.) 935.73 ANTHONYW. TABELL S&P (1200 p.m.) 106.92 DELAFIELD, HARVEY, TAB ELL AWTmn No STatement or expression of op'l1lon or OilY other molter herell1 contained is, or IS to be deemed to be, directly or mdHectly, on offer or the soliCitation of on offer to buy or sell any secunty referred to or menlloned The matter IS presented merely for the converlienCE; of the subSCriber. While we believe the sources of our ,nformo tlon to be reliable, we 111 110 way represent or guarantee the accuracy thereof nor of the statements mude herein Any achon to be token by the subSCriber should be based all lIS own investigation and mfo,matlon Janney Montgomery Scott, Inc, as a corporation, and Its officers or employees, may now have, or may later toke, potlons or trades, respect to any secufltles mentioned In thiS or any future ISSUe, ond such position may be different from ony views now or hereafter expressed In this or ony other Inue Janney Montgomery Secll, Inc, which IS registered With the SEC as on Investment adVisor, moy give odvlce to liS Investment advls.ory and othel customers mdependently of any statements made In this or 111 any other Issue Further Information all any security mentioned herein IS oV(IIloble on request