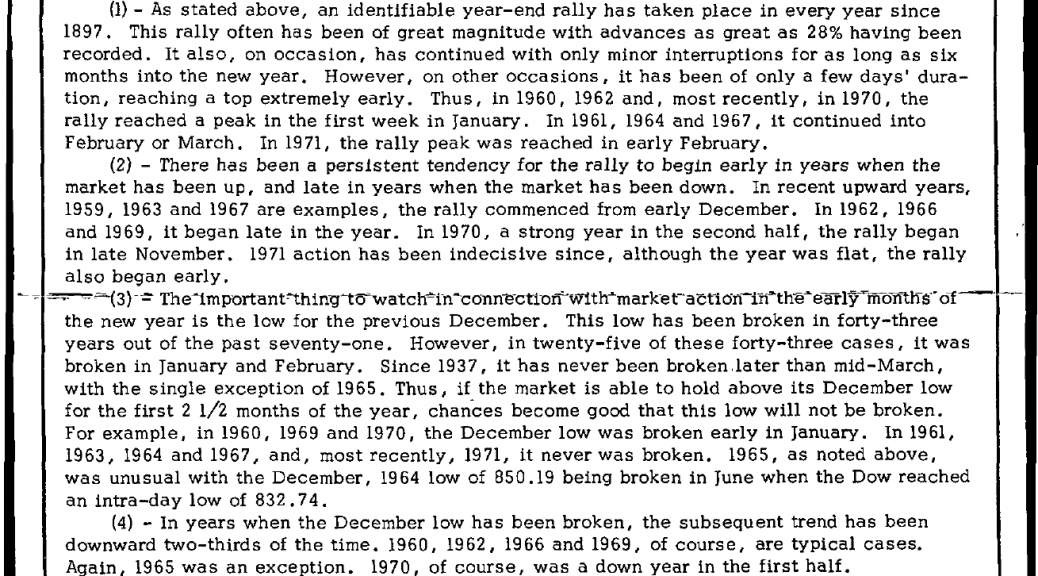 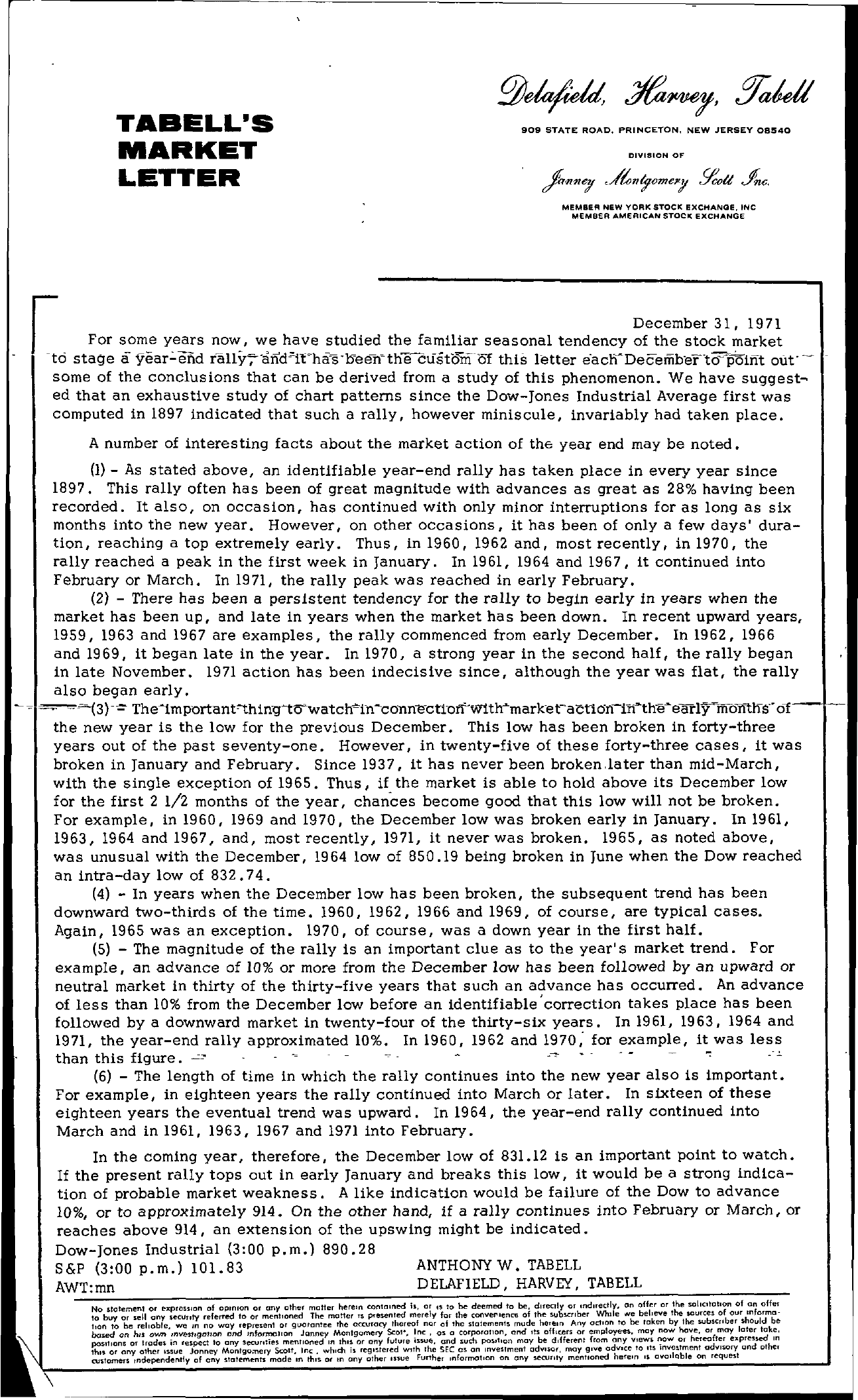 TABELL'S MARKET LETTER 909 STATE ROAD, PRINCETON, NEW JERSEY 08540 DIVISION OF MEMBER NEW YORK STOCK EXCHANGE, INC MEMBER AMERICAN STOCI( eXCHANGE – December 31, 1971 For some years now, we have studied the familiar seasonal tendency of the stock market -to stage a year''enct rally,;,-andlChas-15eelnhe custom of this letter e-acnDecemberto–poifit out— some of the conclusions that can be derived from a study of this phenomenon. We have suggest- ed that an exhaustive study of chart patterns since the Dow-Jones Industrial Average first was computed in 1897 indicated that such a rally, however miniscule, invariably had taken place. A number of interes ting facts about the market action of the year end may be noted. (1) – As stated above, an identifiable year-end rally has taken place in every year since 1897. This rally often has been of great magnitude with advances as great as 28 having been recorded. It also, on occasion, has continued with only minor interruptions for as long as six months into the new year. However, on other occasions, it has been of only a few days' dura- tion, reaching a top extremely early. Thus, in 1960, 1962 and, most recently, in 1970, the rally reached a peak in the first week in January. In 1961, 1964 and 1967, it continued into February or March. In 1971, the rally peak was reached in early February. (2) – There has been a persistent tendency for the rally to begin early in years when the market has been up, and late in years when the market has been down. In recent upward years, 1959, 1963 and 1967 are examples, the rally commenced from early December. In 1962, 1966 and 1969, it began late in the year. In 1970, a strong year in the second half, the rally began in late November. 1971 action has been indecisive since, although the year was flat, the rally – also began early. \3)- ThelmpDrtanFthin-go-watchin–ConnctiDn- W1thmarkeCacnonlrt-th-eearly montifs– 01 the new year is the low for the previous December. This low has been broken in forty-three years out of the past seventy-one. However, in twenty-five of these forty-three cases, it was broken in January and February. Since 1937, it has never been broken.later than mid-March, with the single exception of 1965. Thus, if the market is able to hold above its December low for the first 2 1/2 months of the year, chances become good that this low will not be broken. For example, in 1960,1969 and 1970, the December low was broken early in January. In 1961, 1963, 1964 and 1967, and, most recently, 1971, it never was broken. 1965, as noted above, was unusual with the December, 1964 low of 850.19 being broken in June when the Dow reached an intra-day low of 832.74. (4) – In years when the December low has been broken, the subsequent trend has been downward two-thirds of the time. 1960, 1962, 1966 and 1969, of course, are typical cases. Again, 1965 was an exception. 1970, of course, was a down year in the first half. (5) – The magnitude of the rally is an important clue as to the year's market trend. For example, an advance of 10 or more from the December low has been followed by an upward or neutral market in thirty of the thirty-five years that such an advance has occurred. An advance of less than 10 from the December low before an identifiable'correction takes place has been followed by a downward market in twenty-four of the thirty-six years. In 1961, 1963, 1964 and 1971, the year-end rally approximated 10. In 1960, 1962 and 1970; for example, it was less than this figure. — — – – – – – – – – – — (6) – The length of time in which the rally continues into the new year also is important. For example, in eighteen years the rally continued into March or later. In sixteen of these eighteen years the eventual trend was upward. In 1964, the year-end rally continued into March and in 1961, 1963, 1967 and 1971 into February. In the coming year, therefore, the December low of 831.12 is an important point to watch. If the present rally tops out in early January and breaks this low, it would be a strong indication of probable market weakness. A like indication would be failure of the Dow to advance 10, or to approximately 914. On the other hand, if a rally continues into February or March, or reaches above 914, an extension of the upswing might be indicated. Dow-Jones Industrial (300 p.m.) 890.28 S&P (300 p.m.) 101.83 AWTmn ANTHONY W. TAB ELL DELAFIELD, HARVEY, TABELL l No statement or expressIon of opinion or any other 10 buy or sell ony secunty referred to or menhoned maHer herem The motter IS ccmlmned presented b, or IS to be merely for the deemed to be. cooverlenCti of direCTly or indirectly, the svb!C1lber While on Ne offer or believe Ihe the suorlicCeItsatoiofnouorf on offer mforma- han to be reliable W(l In no way represent or guarantee based on hIS OYm'mvE!1/gotIOll and mfonnoltor'l JOJlJley MthoentogcocmurearcyyStehaet'r,eofncno, roosf the statements 0 corporation, mude herem Any and ,Is officers or achon to be token by the subSCriber should be employees, may now have, or may later toke, poSItions or trades in respect 10 any sccunlies mentioned m Ih,s or ony future Issue, thIS or any other Issue Jonney Montgo;nery Scali, Inc, which is regIstered w,th the and SEC such os on pos,hon ma In …eStment y a be dd d…,sor, f erent from any may gl …e od….c vie e to ws 115 Ino..w.eotrmehnetreaodft..e. lrsorey)apnrdesotheInl cu\stomers Independently of any statements mode In thiS or Inany other Issue further InformollOll on anysecunty mentioned hereIn ISavollQble on requesl