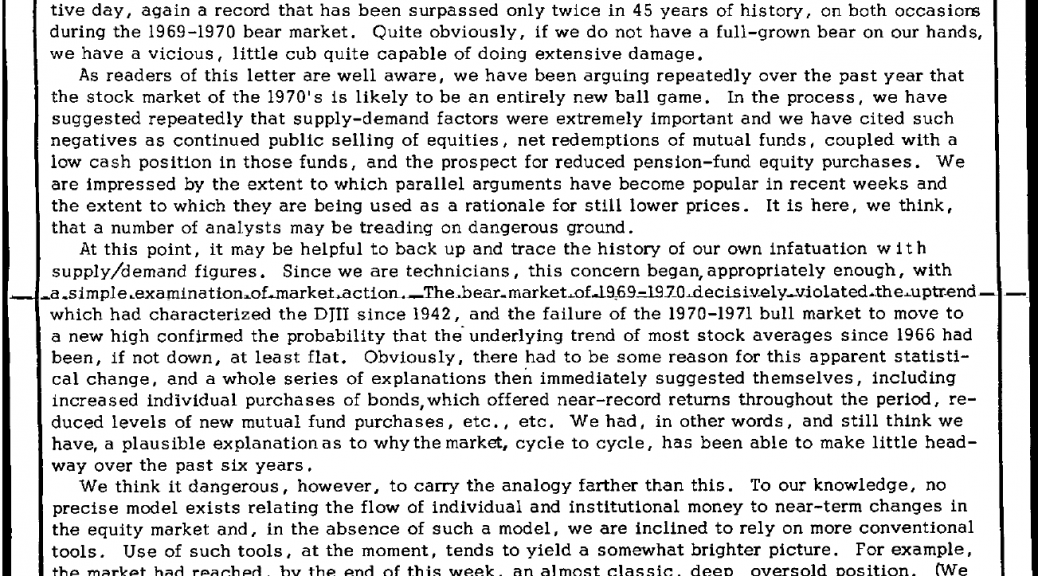 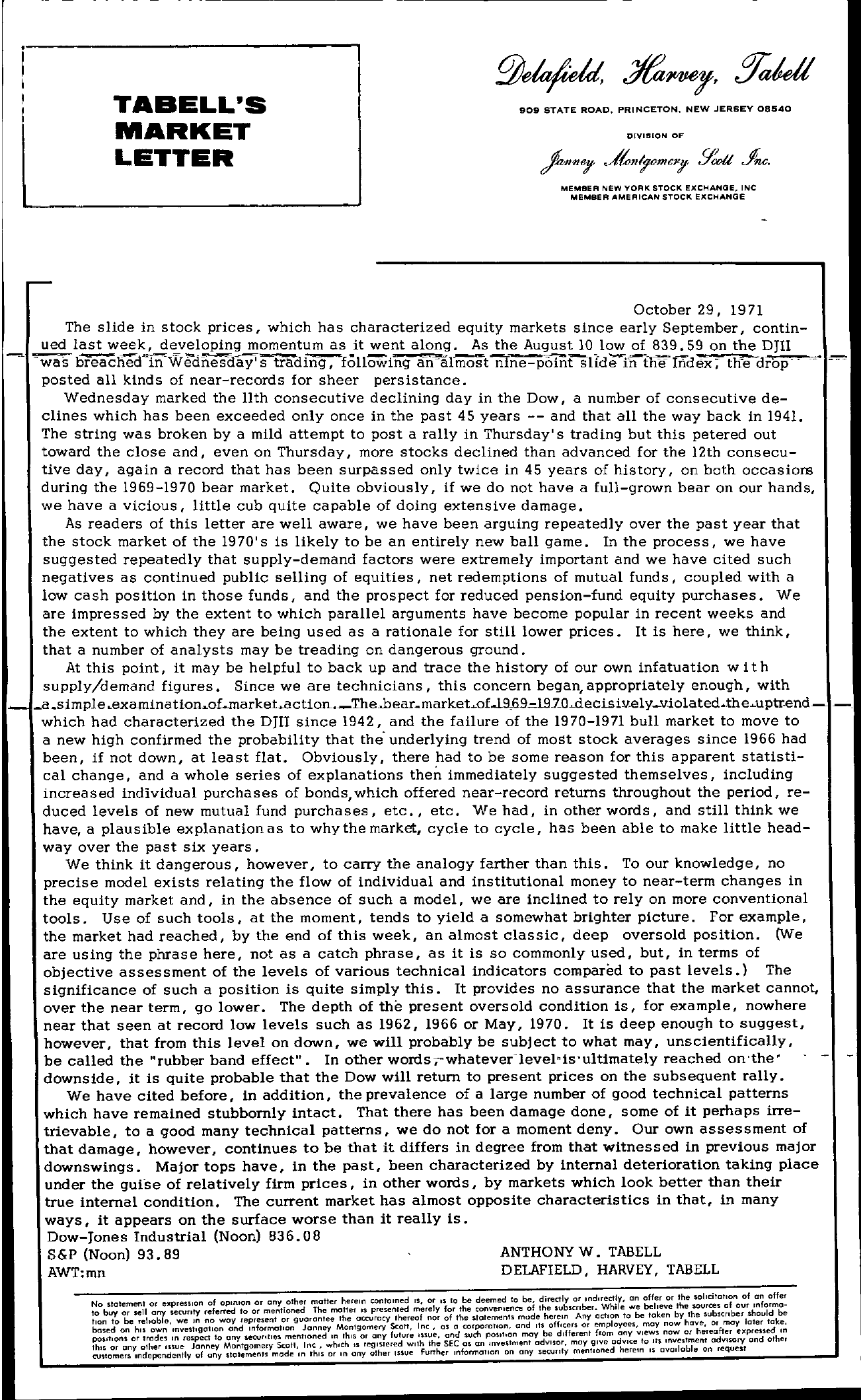 TABELL9 S MARKET LETTER 909 STATE ROAD, PRINCETON. NEW JERSEY 08540 DIVISION OF MEMBER NEW YORK STOCK EXCHANGE, INC MEMBER AMERICAN STOCK EXCHANGE October 29, 1971 The slide in stock prices, which has characterized equity markets since early September, contin- ued last week, developing momentum as it went along. As the August 10 low of 839.59 on the DJll — – was breacnedlnWnescra s tra-ding, following anariiiOStnne-pointslldetntfie Irtd ex; tned';'rop;;;;'-.–1, posted all kinds of near-records for sheer persistance. Wednesday marked the lIth consecutive declining day in the Dow, a number of consecutive de- clines which has been exceeded only once in the past 45 years — and that all the way back in 1941. The string was broken by a mild attempt to post a rally in Thursday's trading but this petered out toward the close and, even on Thursday, more stocks declined than advanced for the 12th consecu- tive day, again a record that has been surpassed only twice in 45 years of history, on both occasiore during the 1969-1970 bear market. Quite obviously, if we do not have a full-grown bear on our hands, we have a vicious, little cub quite capable of doing extensive damage. As readers of this letter are well aware, we have been arguing repeatedly over the past year that the stock market of the 1970's is likely to be an entirely new ball game. In the process, we have suggested repeatedly that supply-demand factors were extremely important and we have cited such negatives as continued public selling of equities, net redemptions of mutual funds, coupled with a low cash position in those funds, and the prospect for reduced pension-fund equity purchases. We are impressed by the extent to which parallel arguments have become popular in recent weeks and the extent to which they are being us ed as a rationale for still lower prices. It is here, we think, that a number of analysts may be treading on dangerous ground. At this point, it may be helpful to back up and trace the history of our own infatuation wit h supply/demand figures. Since we are technicians, this concern began, appropriately enough, with 1 asimple.examination0.marketaction.The.bearmarketof..l969-01970decisill,elyviolatedtheuptrend – – which had characterized the DJll since 1942, and the failure of the 1970-1971 bull market to move to a new high confirmed the probability that the' underlying trend of most stock averages since 1966 had been, if not down, at least flat. Obviously, there had to be some reason for this apparent statisti- cal change, and a whole series of explanations then immediately suggested themselves, including increased individual purchases of bonds,which offered near-record returns throughout the period, re- duced levels of new mutual fund purchases, etc., etc. We had, in other words, and still think we have, a plausible explanation as to why the market, cycle to cycle, has been able to make little head- way over the past six years. We think it dangerous, however, to carry the analogy farther than this. To our knowledge, no precise model exists relating the flow of individual and institutional money to near-term changes in the equity market and, in the absence of such a model, we are inclined to rely on more conventional tools. Use of such tools, at the moment, tends to yield a somewhat brighter picture. For example, the market had reached, by the end of this week, an almost classic, deep oversold position. fYVe are using the phrase here, not as a catch phrase, as it is so commonly used, but, in terms of objective assessment of the levels of various technical indicators compared to past levels.) The significance of such a position is quite simply this. It provides no assurance that the market cannot, over the near term, go lower. The depth of the present oversold condition is, for example, nowhere near that seen at record low levels such as 1962, 1966 or May, 1970. It is deep enough to suggest, however, that from this level on down, we will probably be subj ect to what may, unscientifically, be called the rubber band effect. In other words,whatever-levelis'ultimately reached on'the' downside, it is quite probable that the Dow will return to present prices on the subsequent rally. We have cited before, in addition, the prevalence of a large number of good technical patterns which have remained stubbornly intact. That there has been damage done, some of it perhaps irre- trievable, to a good many technical patterns, we do not for a moment deny. Our own assessment of that damage, however, continues to be that it differs in degree from that witnessed in previous major downswings. Major tops have, in the past, been characterized by internal deterioration taking place under the guise of relatively firm prices, in other words, by markets which look better than their true internal condition. The current market has almost opposite characteristics in that, in many ways, it appears on the surface worse than it really is. Dow-Jones Industrial (Noon) 836.08 S&P (Noon) 93.89 AWTmn ANTHONY W. TABELL DELAFIELD, HARVEY, TABELL htNttpbohlooaoiSSnsbeistodtiaortnoeoasbnmrneoyeshrenrioSelttltlrhioaoaaedrwnbreylensenx,sspIienunrwceevurseeeTsssiJlmtotpaiyngencarnneottoeiffoteyornwoTMpaaeaindyonnynid1rot0egsnpeIoonrcmoerufroersmirreatmynienetanySsltocliomoroonttnetgh,enuedtJrIaiaonrmnanTcnneha.edtetewyteemIhnrMiotchhtthohteeeinrSr1eto5giocInoSrrcmeucpgaer;rinoarseynyctseyleoSrfnleutcnldhtoeeuetddrWtre,emoIiStIIfheS,nrsocnetuhor,leyer,10foSaofEn1rC0adththbocesoeesurscapdtthoanoenterpevaImomnetSilveeolednhunsot,tfnsmnarameenmbnduoetadf,ya1e1dtdhbVihreeeoeisrfcsoefdutimrlicb,yfeSfrmeCosrArraeionynbIryetngrde.foiirmvcrWoeehpmcohlotoinldlayyevn,teloyecoseneb,ve1iombe0ftweafaIleytskisreenvnnmooeorvwwbtetyseohtemr'hsseeooenuels,tlrrCcueaoeibar!dssfOVt0ehIf,nOeyoerfu)yo(IrfoprInonfursolc0ordm!tfhkfoeienrer-' C'Uslomers Independently of any stotements mode In thiS or In ony olher ISsue Further Information on any seomly menlianed herein 15 avollable on request