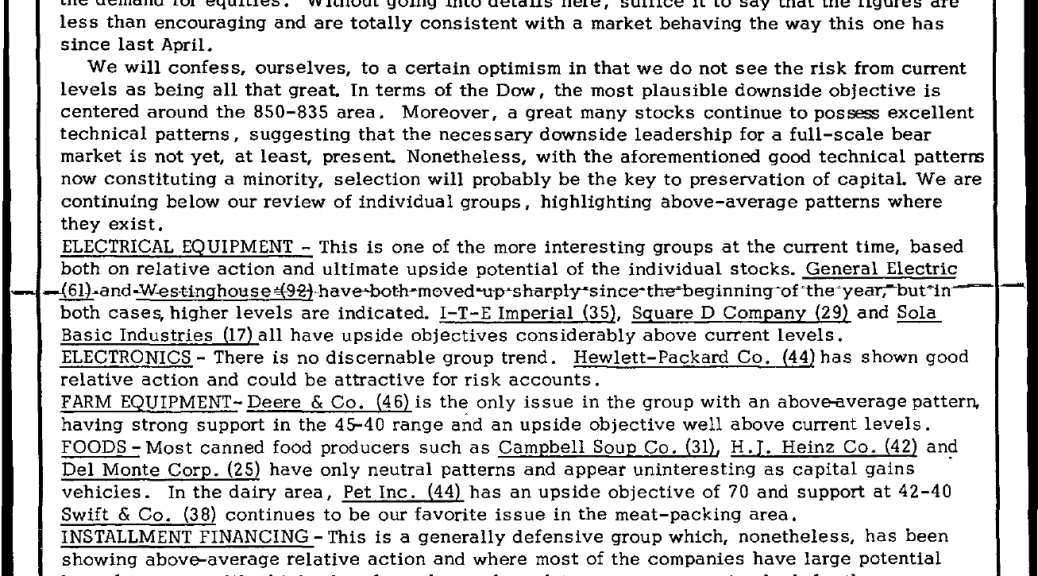 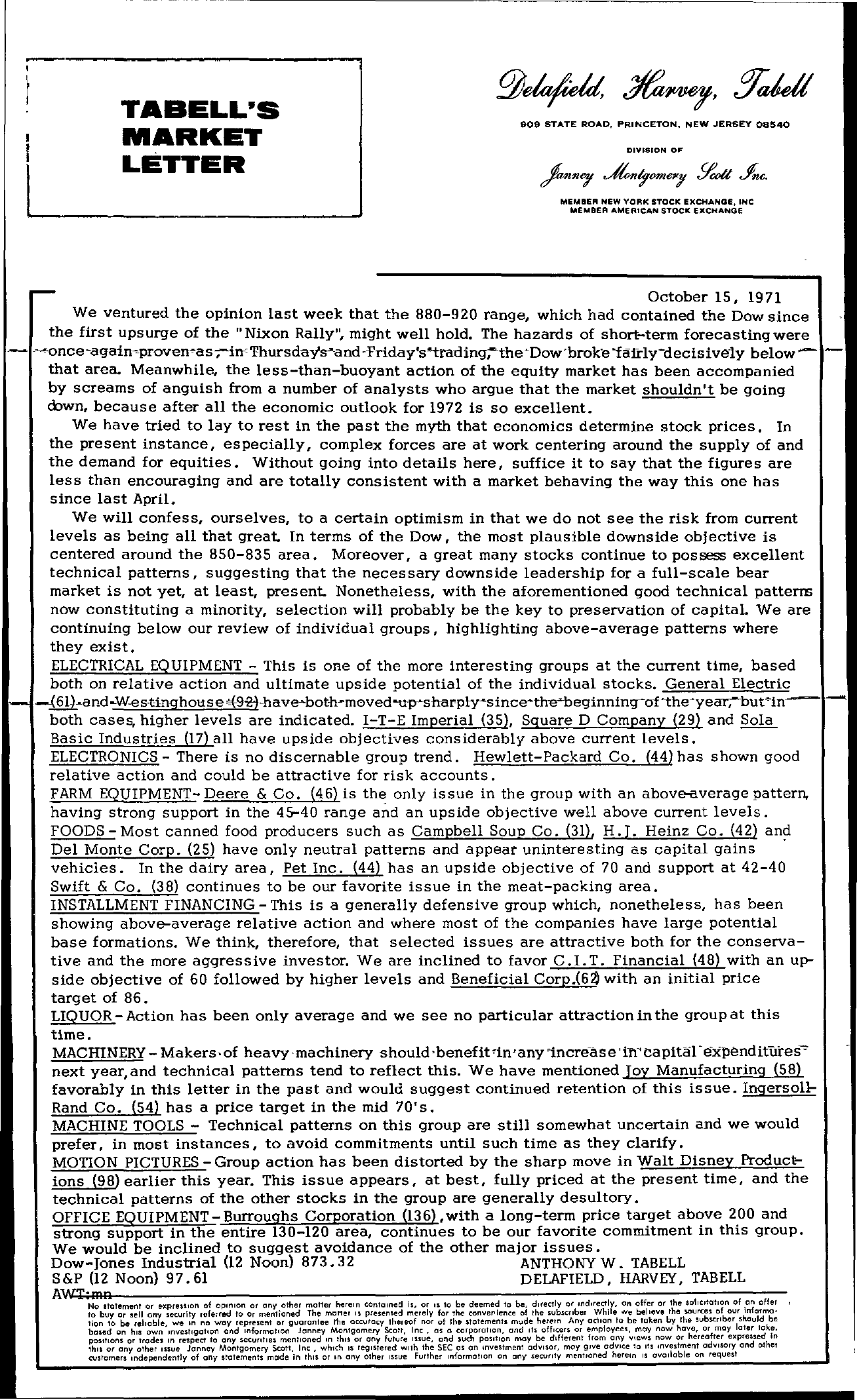 I———————— TABELLS MARKET LETTER 909 STATE ROAD, PRINCETON, NEW JERSEY 08540 DIVISION OF MEMBER NEW VORK STOCK EXCHANGE, INC MEMBER A.MERICAN STOCK EXCHANGE October 15, 1971 We ventured the opinion last week that the 880-920 range, which had contained the Dow since the first upsurge of the Nixon Rally, might well hold. The hazards of short-term forecasting were I-once-againproven-as;-in-''l'hursdaysand'i'rlday's'trauing;-theDow'brok'eiafrly-decisively below- I- – that area. Meanwhile, the less-than-buoyant action of the equity market has been accompanied by screams of anguish from a number of analysts who argue that the market shouldn't be going cbwn, because after all the economic outlook for 1972 is so excellent. We have tried to lay to rest in the past the myth that economics determine stock prices. In the present instance, es pecially, complex forces are at work centering around the supply of and the demand for equities. Without going into details here, suffice it to say that the figures are less than encouraging and are totally consistent with a market behaving the way this one has since last April. We will confess, ourselves, to a certain optimism in that we do not see the risk from current levels as being all that great. In terms of the Dow, the most plausible downside objective is centered around the 850-835 area. Moreover, a great many stocks continue to possess excellent technical patterns, suggesting that the necessary downside leadership for a full-scale bear market is not yet, at least, present. Nonetheless, with the aforementioned good technical pattern; now constituting a minority, selection will probably be the key to preservation of capital. We are continuing below our review of individual groups, highlighting above-average patterns where they exist. ELECTRICAL EQUIPMENT – This is one of the more interesting groups at the current time, based both on relative action and ultimate upside potential of the indiVidual stocks. General Electric – –6l)-and-W-es-tinghousec(-9m-haveboth-m0vedlYshar-ply-sL. , uW,J v Lue ,yea., UUL-m both cases, higher levels are indicated. I-T-E Imperial (35), Square D Company (29) and Sola Basic Industries (17) all have upside objectives considerably above current levels. ELECTRONICS – There is no discernable group trend. Hewlett-Packard Co. (44) has shown good relative action and could be attractive for risk accounts. FARM EQUIPMENT- Deere & Co. (46) is the only issue in the group with an above-average pattern, having strong support in the 45-40 range and an upside objective well above current levels. r.FOODS – Most canned food producers such as Campbell Soup Co. (31), H. Heinz Co. (42) and Del Monte Corp. (25) have only neutral patterns and appear uninteresting as capital gains vehicles. In the dairy area, Pet Inc. (44) has an upside objective of 70 and support at 42-40 Swift & Co. (38) continues to be our favorite issue in the meat-packing area. INSTALLMENT FINANCING – This is a generally defensive group which, nonetheless, has been showing above-average relative action and where most of the companies have large potential base formations. We think, therefore, that selected issues are attractive both for the conserva- tive and the more aggressive investor. We are inclined to favor C. I. T. Financial (48) with an up- side objective of 60 followed by higher levels and Beneficial Corp.(61) with an initial price target of 86. LIQUOR – Action has been only average and we see no particular attraction in the group at this time. MACHINERY – Makers-of heavy-machinery should 'benefit'in'any incre-ase 'tn'capit,H 'expenditures next year, and technical patterns tend to reflect this. We have mentioned Joy Manufacturing (58) favorably in this letter in the past and would suggest continued retention of this issue. Ingersoll- Rand Co. (54) has a price target in the mid 70's. MACHINE TOOLS – Technical patterns on this group are still somewhat uncertain and we would prefer, in most instances, to avoid commitments until such time as they clarify. MOTION PICTURES – Group action has been distorted by the sharp move in Walt Disney Product- ions (98) earlier this year. This issue appears, at best, fully priced at the present time, and the technical patterns of the other stocks in the group are generally desultory . OFFICE EQUIPMENT-Burroughs Corporation (136),with a long-term price target above 200 and strong support in the entire 130-120 area, continues to be our favorite commitment in this group. We would be inclined to suggest avoidance of the other major issues. Dow-Jones Industrial (12 Noon) 873.32 ANTHONY W. TABELL S&P (12 Noon) 97.61 DELAFIELD, HARVEY, TAB ELL AV'TelRR No stalement or CXprel10n of opinion or ony other matter herein COnf(lIned Is, or IS 10 be deemed 10 be, directly or Ind,rectly, on offer or the soliCitation of on offer to buy Or sell any security referred to or mentioned The mailer IS presented merely for the converlence of the substnber While we believe the sources of our Informa' tlon to be reliable we In no way represent or guarantee thl! accuracy thereof nor of the stolements mude herein Any actIOn to be token by the subs.cnber should be based on hiS own 'InvestllJo!lon and Informotlon Janney Montgomery SCalI, Inc, as a corporation, and Its officers or employees, may now have, or may later toke, poslhons or trodes In respect to any SKunlle! mentioned In thiS or any future Issue, and such position may be different from any views now or hereafter expressed In thiS or any other Issue Janney Montgomery Scott, Inc, which IS registered wl1h the SEC as on Investment adVisor, moy give adVice to Its Investment adVISOry and othel C\lstomers Independently of ony stotements made In thiS or In ony other Issue Further information on any security mentioned herein IS ovallable on request