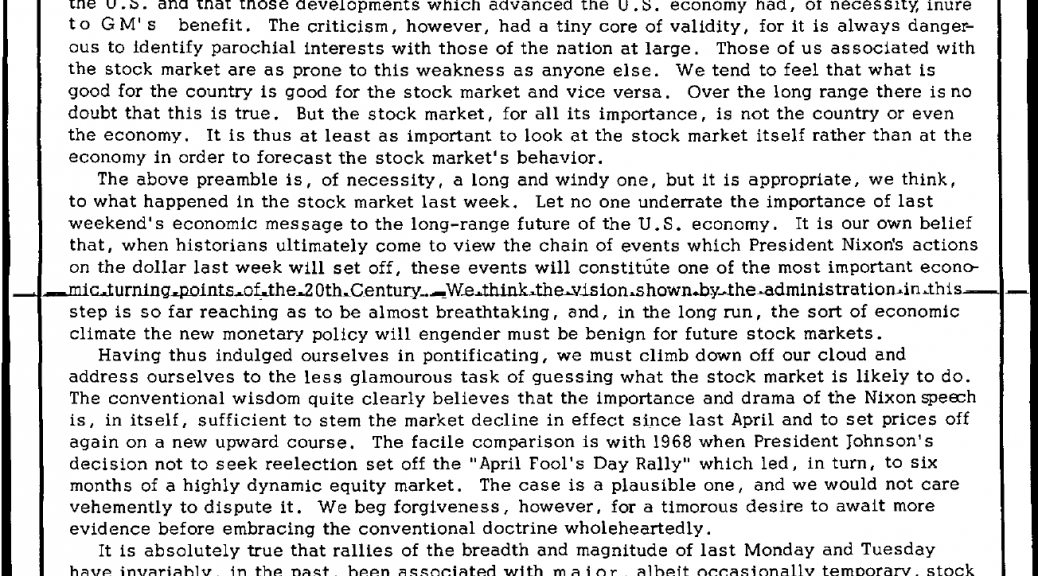 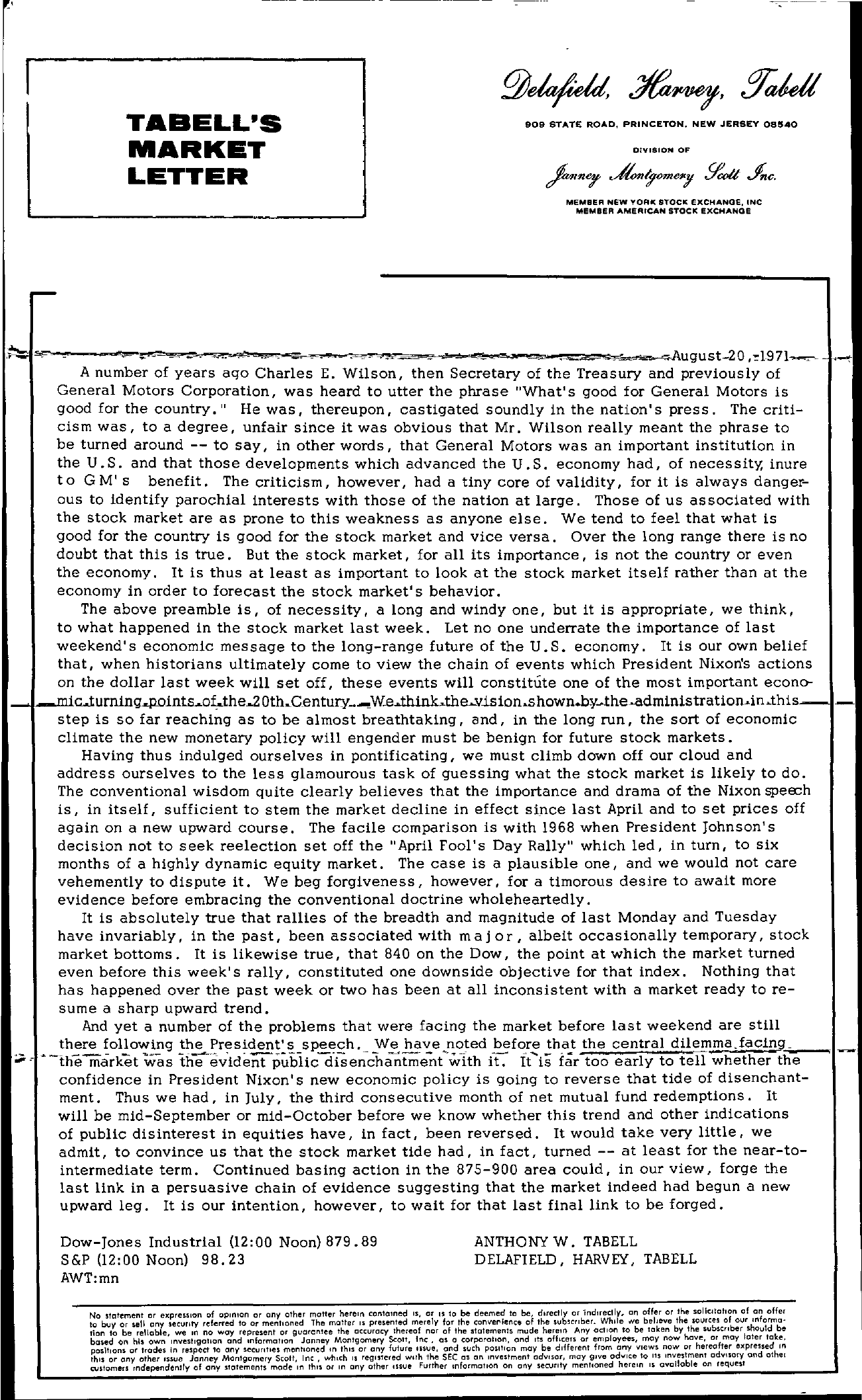 —– ——– ———- -c—- – I TABELL'S MARKET LETTER 909 STATE ROAD. PRINCETON. NEW JERSEY 08540 DIYISION OF MEMBER NEW YORK STOCK EXCHANGE, INC MEMBER AMERICAN STOCK EXCHANGE – – u . -W '…. p s. August-20,d-971,……– A number of years aqo Charles E. Wilson, then Secretary of the Treasury and previously of General Motors Corporation, was heard to utter the phrase What's good for General Motors is good for the country. He was, thereupon, castigated soundly in the nation's press. The criti- cism was, to a degree, unfair since it was obvious that Mr. Wilson really meant the phrase to be turned around — to say, in other words, that General Motors was an important institution in the U. S. and that thos e developments which advanced the U . S. economy had, of neces sity, inure toG M' s benefit. The criticism, however, had a tiny core of validity, for it is always danger- ous to identify parochial interests with those of the nation at large. Those of us associated with the stock market are as prone to this weakness as anyone else. We tend to feel that what is good for the country is good for the stock market and vice versa. Over the long range there is no doubt that this is true. But the stock market, for all its importance, is not the country or even the economy. It is thus at least as important to look at the stock market itself rather than at the economy in order to forecast the stock market's behavior. The above preamble is, of necessity, a long and windy one, but it is appropriate, we think, to what happened in the stock market last week. Let no one underrate the importance of last weekend's economic mes sage to the long-range future of the U . S. economy. It is our own belief that, when historians ultimately come to view the chain of events which President Nixon's actions on the dollar last week will set off, these events will constitute one of the most important econo- -mic..turning..points0f..the2 OthGentury.We .tb j nktbevision.shown.b–theadministration.in .this – step is so far reaching as to be almost breathtaking, and, in the long run, the sort of economic climate the new monetary policy will engender must be benign for future stock markets. Having thus indulged ourselves in pontificating, we must climb down off our cloud and address ourselves to the less glamourous task of guessing what the stock market is likely to do. The conventional wisdom quite clearly believes that the importance and drama of the Nixon speech is, in itself, sufficient to stem the market decline in effect since last April and to set prices off again on a new upward course. The facile comparison is with 1968 when PreSident Johnson's decision not to seek reelection set off the April Fool's Day Rally which led, in turn, to six months of a highly dynamic equity market. The case is a plausible one, and we would not care vehemently to dispute it. We beg forgiveness, however, for a timorous desire to await more evidence before embraCing the conventional doctrine wholeheartedly. It is absolutely true that rallies of the breadth and magnitude of last Monday and Tuesday have invariably, in the past, been associated with m a j 0 r , albeit occasionally temporary, stock market bottoms. It is likewise true, that 840 on the Dow, the point at which the market turned even before this week's rally, constituted one downside objective for that index. Nothing that has happened over the past week or two has been at all inconsistent with a market ready to re- sume a sharp upward trend. And yet a number of the problems that were facing the market before last weekend are still there following the President's speech. We have noted before that the central dilemma.facing ie;;..- -Ulemarket was tiiElevidentPul;iiC(iise;chantentwlth reis far too early to tell whether the confidence in President Nixon's new economic policy is going to reverse that tide of disenchant- ment. Thus we had, in July, the third consecutive month of net mutual fund redemptions. It will be mid-September or mid-October before we know whether this trend and other indications of public disinterest in equities have, in fact, been reversed. It would take very little, we admit, to convince us that the stock market tide had, in fact, turned — at least for the near-to- intermediate term. Continued basing action in the 875-900 area could, in our view, forge the last link in a persuasive chain of evidence suggesting that the market indeed had begun a new upward leg. It is our intention, however, to wait for that last final link to be forged. Dow-Jones Industrial (1200 Noon) 879.89 S&P (1200 Noon) 98.23 AWTmn ANTHONY W. TABELL DELAFIELD, HARVEY, TAB ELL No statement or expresSIon of opinion or ony other matter herein cont(lIned 1, or 1 10 be deemed 10 be, directly or Indirectly, em offer or the 011(1Iollon of on offer to buy or 5e1l ony security referred to or mentioned The motter IS presented merely for the converolence of the subscriber. While- 'He believe the sources of our Informo tion to be reHoble, we ,n no way represent or guarantee the accuracy thereof nor of the statement!. mude herem Any action to be taken by the !.ubscnber should be based on his own Investlgallon and information Janney Montgomery Scoll, Inc, as 0 corporation, and Its officers or employees, may now have, or may loter take, positions or Irodes In respect 10 any securities menhoned In thiS or any future Issue, and such POSition may be different from any views now or hereafter expressed In thiS or any other Issue Janney Montgomery Scott, Inc, which IS reglered With the SEC as on Investment adVisor, moy give adVice 10 lis Investment adVisory and othel customers Independently of any stotements made ,n thn or In any other ISsue Further mformatlon on any seevrlly mentioned herein 1 available on requesl