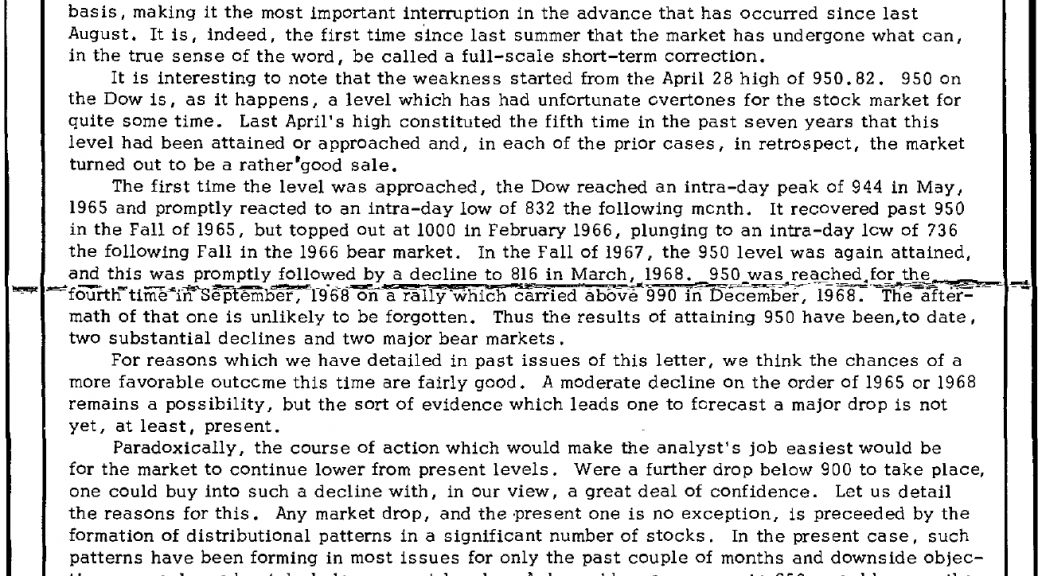 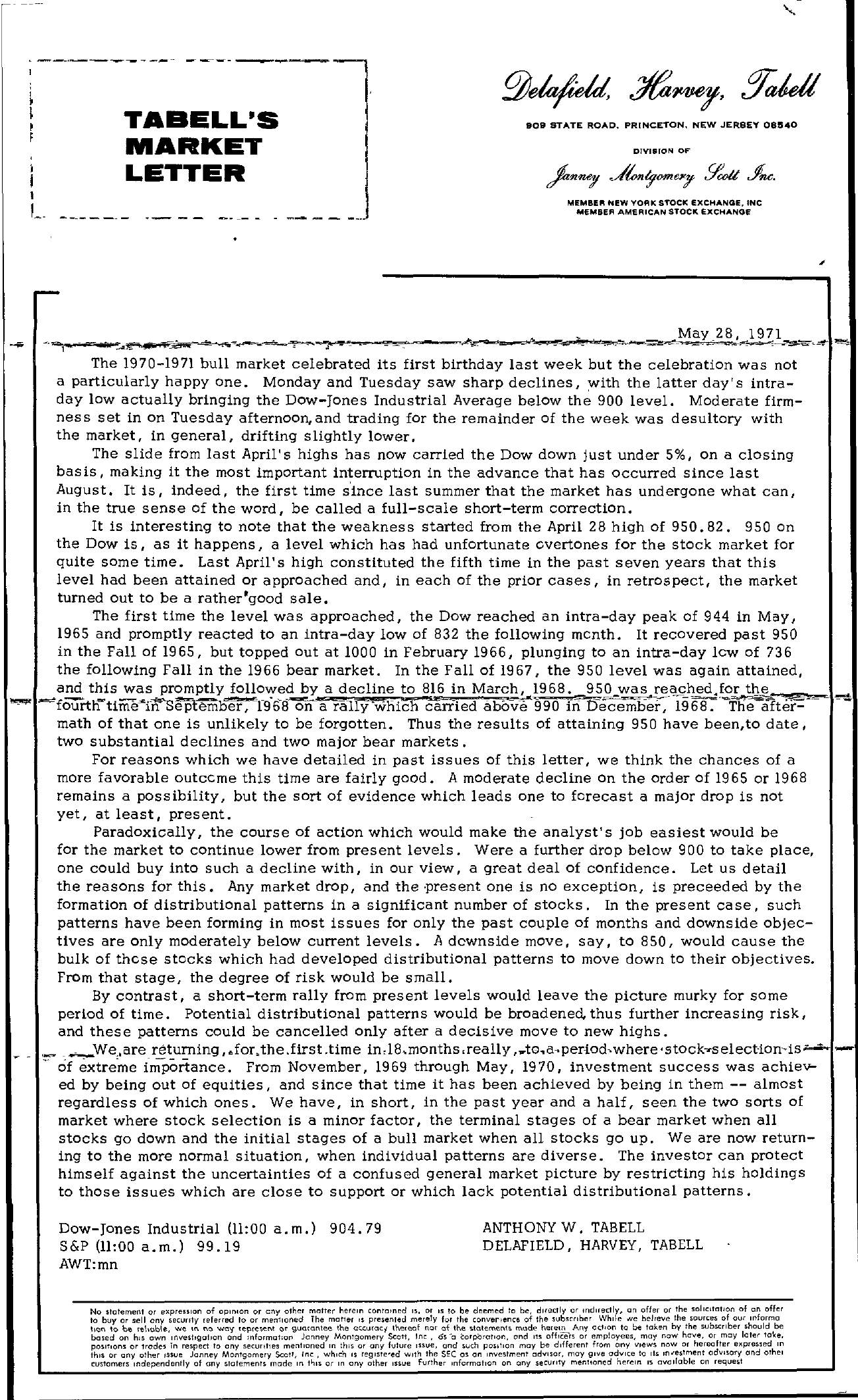 ;——–. ——l ,' . I TABELL'S MARKET i I LETTER 1 L 909 STATE ROAD, PRINCETON. NEW JERSEY 08540 DIVISION OF MEMBER NEW YORK STOCK EXCHANGE,INC MEMBER AMERICAN STOCK EXCHANGe .. … — The 1970-1971 bull market celebrated its first birthday last week but the celebration was not a particularly happy one. Monday and Tuesday saw sharp declines, with the latter day's intraday low actually bringing the Dow-Jones Industrial Average belOW the 900 level. Moderate firmness set in on Tuesday afternoon, and trading for the remainder of the week was desultory with the market, in general, drifting slightly lower, The slide from last April's highs has now carried the Dow down just under 5, on a closing basis, making it the most important interruption in the advance that has occurred since last August. It is, indeed, the first time s'ince last summer that the market has undergone what can, in the true sense of the word, be called a full-scale short-term correction. It is interesting to note that the weakness started from the April 28 high of 950.82. 950 on the Dow is, as it happens, a level which has had unfortunate overtones for the stock market for quite some time. Last April's high constituted the fifth time in the past s even years that this level had been attained or approached and, in each of the prior cases, in retrospect, the market turned out to be a rather'good sale. The first time the level was approached, the Dow reached an intra-day peak of 944 in May, 1965 and promptly reacted to an intra-day low of 832 the following mcnth. It recovered past 950 in the Fall of 1965, but topped out at 1000 in February 1966, plunging to an intra-day low of 736 the following Fall in the 1966 bear market. In the Fall of 1967, the 950 level was again attained, and this was promptly followed by a decline to 816 in March, 1968. 950was reachd.for the 4 – ….. 'fourth-timeiJn;eptem15er, T9'6SOTI a rally 'wnich carded abbvt990 ln'Oecemoer, 1968 -'fh'eafter-'- math of that one is unlikely to be forgotten. Thus the results of attaining 950 have been,to date, two substantial declines and two major bear markets. For reasons which we have detailed in past issues of this letter, we think the chances of a more favorable outccme this time are fairly good. A moderate decline on the order of 1965 or 1968 remains a possibility, but the sort of evidence which leads one to fcrecast a major drop is not yet, at least, present. Paradoxically, the course of action which would make the analyst's job easiest would be for the market to continue lower from present levels. Were a further drop below 900 to take place, one could buy into such a decline with, in our view, a great deal of confidence. Let us detail the reasons for this. Any market drop, and the ,pres ent one is no exception, is preceed ed by the formation of distributional patterns in a significant number of stocks. In the present case, such patterns have been forming in most issues for only the past couple of months and downside objectives are only moderately below current levels. A downside mOve, say, to 850, would cause the bulk of those stccks which had developed distributional patterns to move down to their objectives. From that stage, the degree of risk would be small. By contrast, a short-term rally from present levels would leave the picture murky for some period of time. Potential distributional patterns would be broadened, thus further increasing risk, and these patterns could be cancelled only after a decisive move to new highs. ,-,-We.,are returning, .for.theJirst .time in,18,months ,really ,t0.a,period,where'stockselect-ion'iS – cif extreme importance. From November, 1969 through May, 1970, investment success was achieved by being out of equities, and since that time it has been achieved by being in them — almost regardless of which ones. We have, in short, in the past year and a half, seen the two sorts of market where stock selection is a minor factor, the terminal stages of a bear market when all stocks go down and the initial stages of a bull market when all stocks go up. We are now returning to the more normal situation, when individual patterns are diverse. The investor can protect himself against the uncertainties of a confused general market picture by restricting his holdings to those issues which are close to support or which lack potential distributional patterns. Dow-Jones Industrial (1100 a. m.) 904.79 S&P (1100 a.m.) 99.19 AWTmn ANTHONY W. TABELL DELAFIELD, HARVEY, TABELL No statement or expreHlon of Opinion or cny other motter herein contolned IS, or IS to be deemed 0 be, directly or mdlrectly, on offer or the sol,cltotlon of on offer to buy or sell any security referred to or mentioned The matter IS presented merely for the converlence of the subscriber While we believe the sources of our Informa tlcn to be re\.oble, we \\ f'l0 way repreo.ef'l! or guoraf'ltee the occurac,/ thereaf nor of the 5.\olemef'lt5. mud, here'!'….. Any OChof'l to be tOKen by the subSCriber should be based on ha own Investigation and Information Janney MOf'ltgomery Scott, Inc, 6s 'a corporotlon, and lIs officers or employees, may now have, or may later take, pOSitIons or trades in respect to any securottes mentIOned In Ihls or any future Issue, and such pOSitIon may be different from any Views now or hereafter expressed In HilS or any other Issue Janney Montgomery Scolf, Inc, whIch IS reglste-ed With the SEC as on Investment adVIsor, may gIve adVice to Its Inestment adVisory and othel customers Independently of ony slatemena mode 111 tIS or In ony other Issue Further Information on any security mentioned herein IS ovallable on request