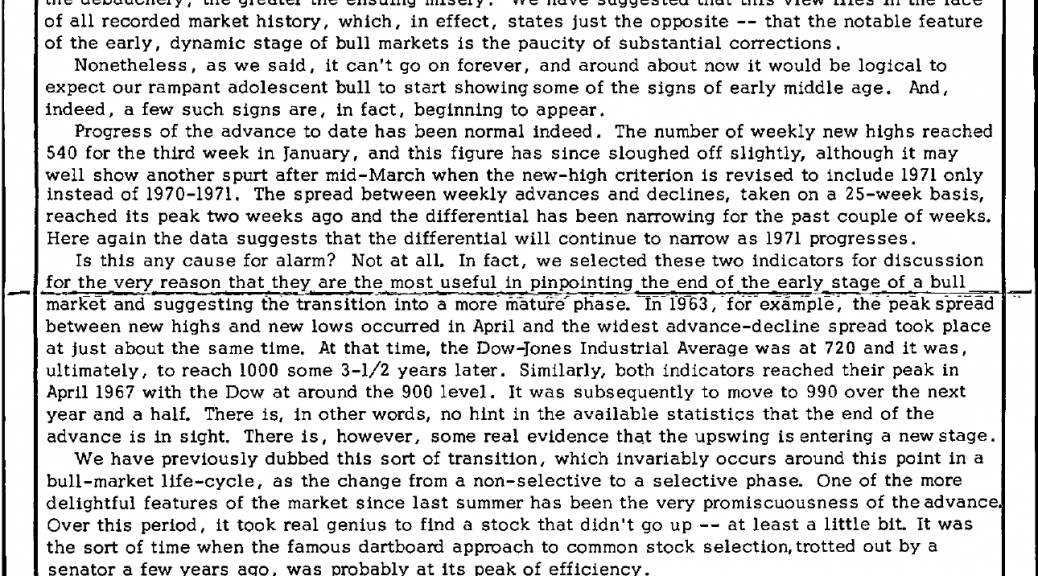 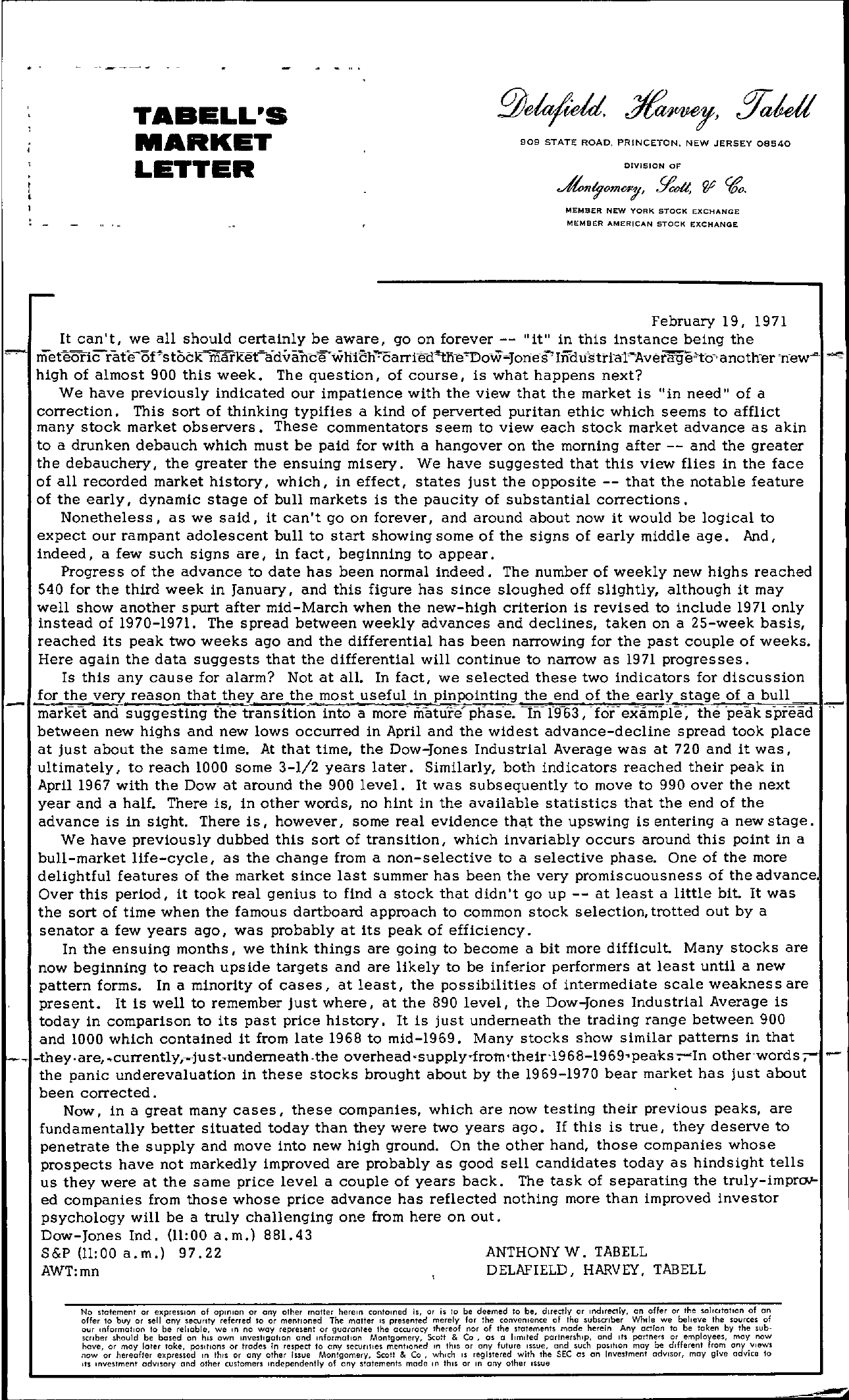 TABELL'S MARKET LETTER 909 STATE ROAD. PRINCETON, NEW JERSEY 06540 DIVISION OF MEMBER NEW YORK STOCK EXCHANGE MEMBER AMERICAN STOCK EXCHA.NGE February 19, 1971 It can't, we all should certainly be aware, go on forever — it in this instance being the ,..,…. meteioricrafifofstocK'rriatKetadvancewni'ahCarrietr'tlteDowJOrfe-S'Iii'dustttalAverage'tb'anoth-er -new …. high of almost 900 this week. The question, of course, is what happens next We have previously indicated our impatience with the view that the market is in need of a correction. This sort of thinking typifies a kind of perverted puritan ethic which seems to afflict many stock market observers. These commentators seem to view each stock market advance as akin to a drunken debauch which must be paid for with a hangover on the morning after — and the greater the debauchery, the greater the ensuing misery. We have suggested that this view flies in the face of all recorded market history, which, in effect, states just the opposite — that the notable feature of the early, dynamic stage of bull markets is the paucity of substantial corrections. Nonetheless, as we said, it can't go on forever, and around about now it would be logical to expect our rampant adolescent bull to start showing some of the signs of early middle age. And, indeed, a few such signs are, in fact, beginning to appear. Progress of the advance to date has been normal indeed. The number of weekly new highs reached 540 for the third week in January, and this figure has since sloughed off slightly, although it may well show another spurt after mid-March when the new-high criterion is revised to include 1971 only instead of 1970-1971. The spread between weekly advances and declines, taken on a 25-week basis, reached its peak two weeks ago and the differential has been narrowing for the past couple of weeks. Here again the data suggests that the differential will continue to narrow as 1971 progresses. Is this any cause for alarm Not at all. In fact, we selected these two indicators for discussion for the very reason that they are the most useful in pinpointing the end of the early stage of a bull market and suggesting the transition into a more- maturE,' phase. -In f963, -for- example; thE! -peak spread between new highs and new lows occurred in April and the widest advance-decline spread took place at Just about the same time. At that time, the Dow-Jones Industrial Average was at 720 and it was, ultimately, to reach 1000 some 3-1/2 years later. Similarly, both indicators reached their peak in April 1967 with the Dow at around the 900 level. It was subsequently to move to 990 over the next year and a half. There is, in other words, no hint in the available statistics that the end of the advance is in sight. There is, however, some real evidence thaJ the upswing is entering a new stage. We have previously dubbed this sort of transition, which invariably occurs around this point in a bull-market life-cycle, as the change from a non-selective to a selective phase. One of the more delightful features of the market since last summer has been the very promiscuousness of the advance Over this period, it took real genius to find a stock that didn't go up — at least a little bit. It was the sort of time when the famous dartboard approach to common stock selection, trotted out by a senator a few years ago, was probably at its peak of efficiency. In the ensuing months, we think things are going to become a bit more difficult. Many stocks are now beginning to reach upside targets and are likely to be inferior performers at least until a new pattern forms. In a minority of cases, at least, the possibilities of intermediate scale weakness are present. It is well to remember just where, at the 890 level, the Dow-Jones Industrial Average is today in comparison to its past price history. It is just underneath the trading range between 900 and 1000 which contained it from late 1968 to mid-1969. Many stocks show similar patterns in that -they. are, .currently,justunderneath -the overhead 'supply-from their-1968-1969pea'ksIn other-words;- – the panic underevaluation in these stocks brought about by the 1969-1970 bear market has just about been corrected. Now, in a great many cases, these companies, which are now testing their previous peaks, are fundamentally better situated today than they were two years ago. If this is true, they deserve to penetrate the supply and move into new high ground. On the other hand, those companies whose prospects have not markedly improved are probably as good sell candidates today as hindsight tells us they were at the same price level a couple of years back. The task of separating the truly-imprCJ,'- ed companies from those whose price advance has reflected nothing more than improved investor psychology will be a truly challenging one from here on out. Dow-Jones Ind. (1100 a.m.) 881.43 S&P (1100 a.m.) 97.22 ANTHONY W. TABELL AWTmn DELAFIELD, HARVEY. TASELL No statement or expression of opinion or any other matter herem contomed Is, or is 10 be deemed 10 be, directly or Indirectly, on offer or the 5oltcltalton of on offer to bvy or sell any seamty referred to or mentioned The matter IS presented merely for the convenience of the subscriber Whtle we believe the sources of our mformatlan to be reliable, we m no way represent or guarantee the acctJracy thereof nor of the statements mode herein Any action to be laken by the subcrlber should be bosed on hIS own Inveshgoilon and Informotlon Montgomery, Scott & Co, as a limited partnership, and 11 partnen or emplolees, may now have, or may later toke, POSitionS or trades in respect to any securities mentioned In thiS or any future Issue, and such poslilon may be different rom any Views now or hereafter expressed In HilS or any other Issue Montgomery, 5c01l & Co, which IS registered with the SEC as on Investment adVisor, may give advice to liS Investment adVisory and olher customers Independently of any statements mode In th15 or In any other Issue