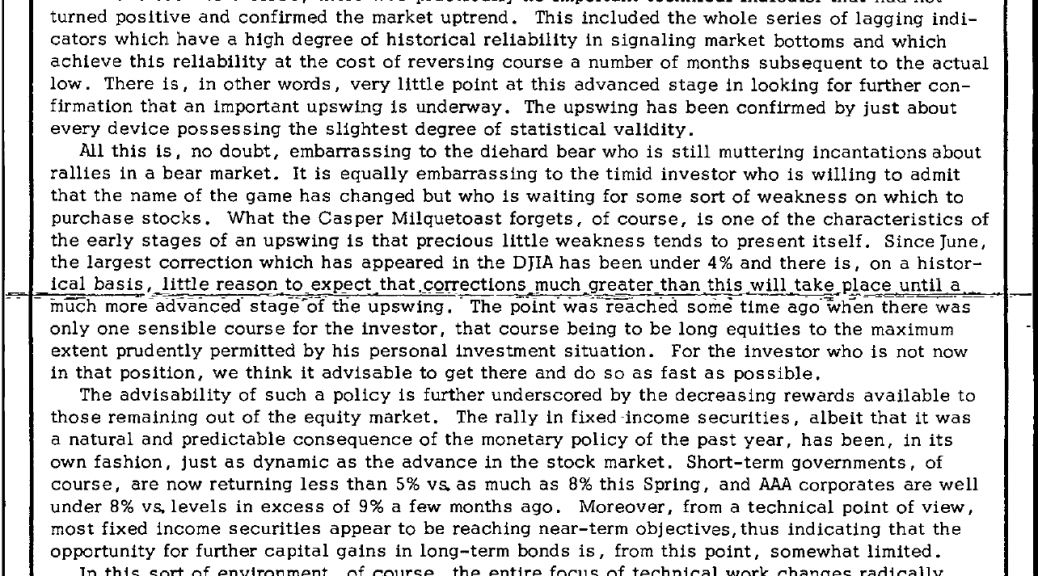 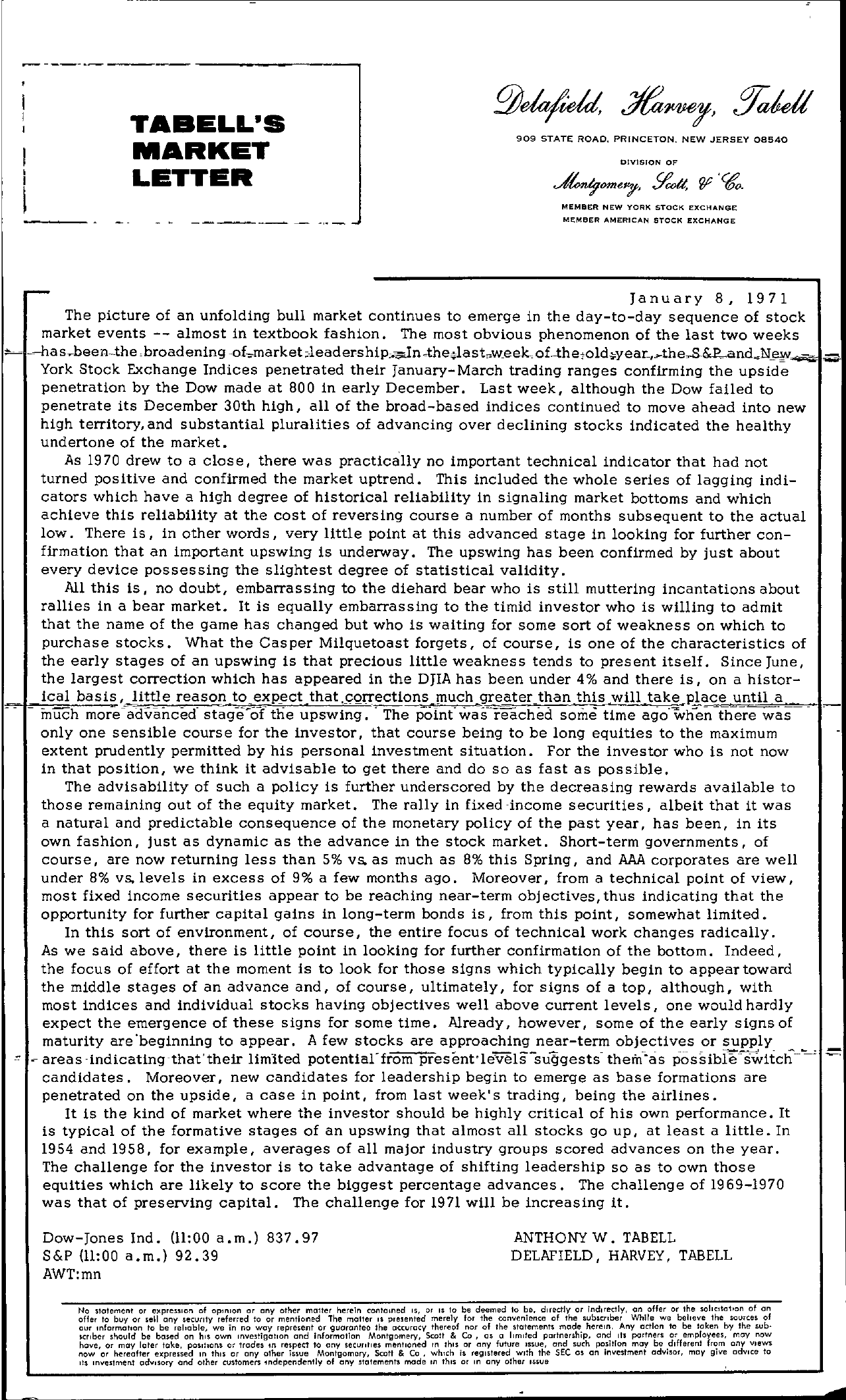 TABELL'S MARKET LETTER 909 STATE ROAD, PRINCETON, NEW JERSEY 08540 DIVISION OF MEMBER NEW YORK STOCK EXCHANGE MEMBER AMERICAN STOCK EXCHANGE January 8,1971 The picture of an unfolding bull market continues to emerge in the day-to-day sequence of stock market events — almost in textbook fashion. The most obvious phenomenon of the last two weeks – –ha sbeen-the, broadening -ofmarket Jeader-s hip,.In ethelastoweek oLthe,oldwear.,Ahes'&andN ; York Stock Exchange Indices penetrated their January-March trading ranges confirming the upside penetration by the Dow made at 800 in early December. Last week, although the Dow failed to penetrate its December 30th high, all of the broad-based indices continued to move ahead into new high territory, and substantial pluralities of advancing over declining stocks indicated the healthy undertone of the market. As 1970 drew to a close, there was practically no important technical indicator that had not turned positive and confirmed the market uptrend. This included the whole series of lagging indicators which have a high degree of historical reliability in signaling market bottoms and which achieve this reliability at the cost of reversing course a number of months subsequent to the actual low. There is, in other words, very little point at this advanced stage in looking for further confirmation that an important upswing is underway. The upswing has been confirmed by just about every device possessing the slightest degree of statistical validity. All this is, no doubt, embarrassing to the diehard bear who is still muttering incantations about rallies in a bear market. It is equally embarrassing to the timid investor who is willing to admit that the name of the game has changed but who is waiting for some sort of weakness on which to purchase stocks. What the Casper Milquetoast forgets, of course, is one of the characteristics of the early stages of an upswing is that precious little weakness tends to present itself. Since June, the largest correction which has appeared in the DJIA has been under 4 and there is, on a historical basis, little reason to expect that,cQrrections !lluch greater.than this will take place until a – – – mUCh more–advanced- stage'o- tne upswing. -. The point was reached. some time ago-whn-ih-erewas- – only one sensible course for the investor, that course being to be long equities to the maximum extent prudently permitted by his personal investment situation. For the investor who is not now in that position, we think it advisable to get there and do so as fast as possible. The advisability of such a policy is further underscored by the decreasing rewards available to those remaining out of the equity market. The rally in fixed -income securities, albeit that it was a natural and predictable consequence of the monetary policy of the past year, has been, in its own fashion, just as dynamic as the advance in the stock market. Short-term governments, of course, are now returning less than 5 vs. as much as 8 this Spring, and AAA corporates are well under 8 vs. levels in excess of 9 a few months ago. Moreover, from a technical point of view, most fixed income securities appear to be reaching near-term objectives, thus indicating that the opportunity for further capital gains in long-term bonds is, from this point, somewhat limited. In this sort of environment, of course, the entire focus of technical work changes radically. As we said above, there is little point in looking for further confirmation of the bottom. Indeed, the focus of effort at the moment is to look for those signs which typically begin to appear toward the middle stages of an advance and, of course, ultimately, for signs of a top, although, with most indices and individual stocks having objectives well above current levels, one would hardly expect the emergence of these signs for some time. Already, however, some of the early signs of maturity are 'beginning to appear. A few stocks are approaching near-term objectives or supply . areasindicatingthat'their limIted potential'from presemt'levels-suggests- themas pOssibsv,itch''–' candidates. Moreover, new candidates for leadership begin to emerge as base formations are penetrated on the upside, a case in point, from last week's trading, being the airlines. It is the kind of market where the investor should be highly critical of his own performance. It is typical of the formative stages of an upswing that almost all stocks go up, at least a little. In 1954 and 1958, for example, averages of all major industry groups scored advances on the year. The challenge for the investor is to take advantage of shifting leadership so as to own those equities which are likely to score the biggest percentage advances. The challenge of 1969-1970 was that of preserving capital. The challenge for 1971 will be increasing it. Dow-Jones Ind. (1100 a.m.) 837.97 S&P (1100 a.m.) 92.39 AWTmn ANTHONY W. TAB ELL DELAFIELD, HARVEY, TABELL No statement or expression of oPInion or any other maller hereIn contamed IS, or IS 10 be deemed to e, directly or ndlfl'!1!ly, on offer or the 5011l110110n of an offer 10 buy or sell any security referred to or mentioned The moiler IS presented merely for the convenience of the subscriber WhIle we believe the sources of our Information to be reliable, we in no way represent or guarantee the accuracy thereof nor of the statements mode. herein, Any action to be token by the sub 5mber should be based on hiS own investigation and Information Montgomery, Scott & Co, as a limited partnership, an lis partners or employees, may now have, or may later take, positions or trades m respect to any seCUrities mentioned In thiS or any fuftJre Issue, and such pOSition may be different frm any views now or hereafter expressed In thiS or any other issue Montgomery, Scott & Co, which is registered With the SEC as an Investment advisor, may give adVice to lIs Investment adVISOry and other customers 'ndependently of any statements made In thiS or In any other Issue ,