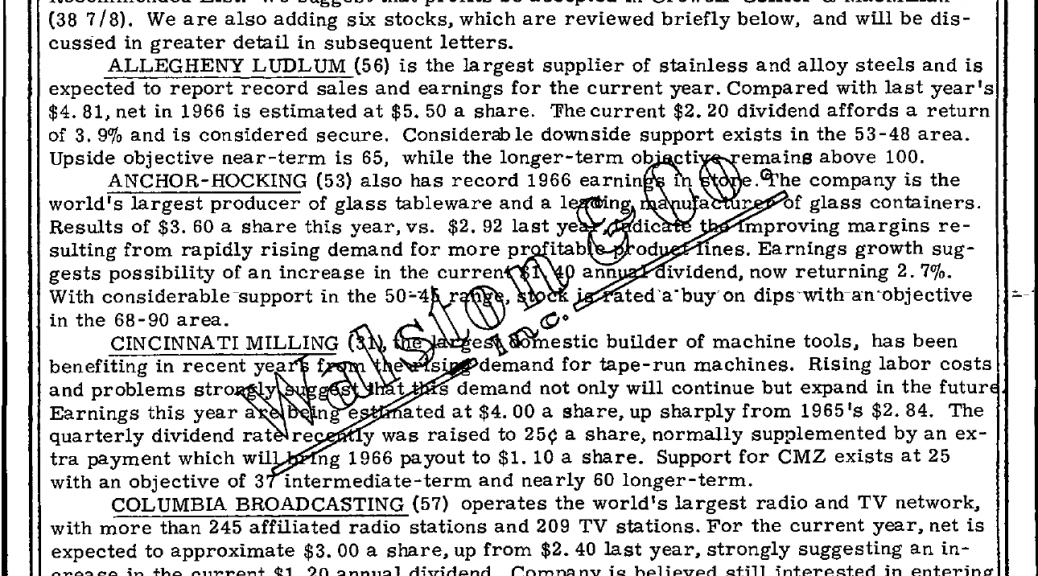 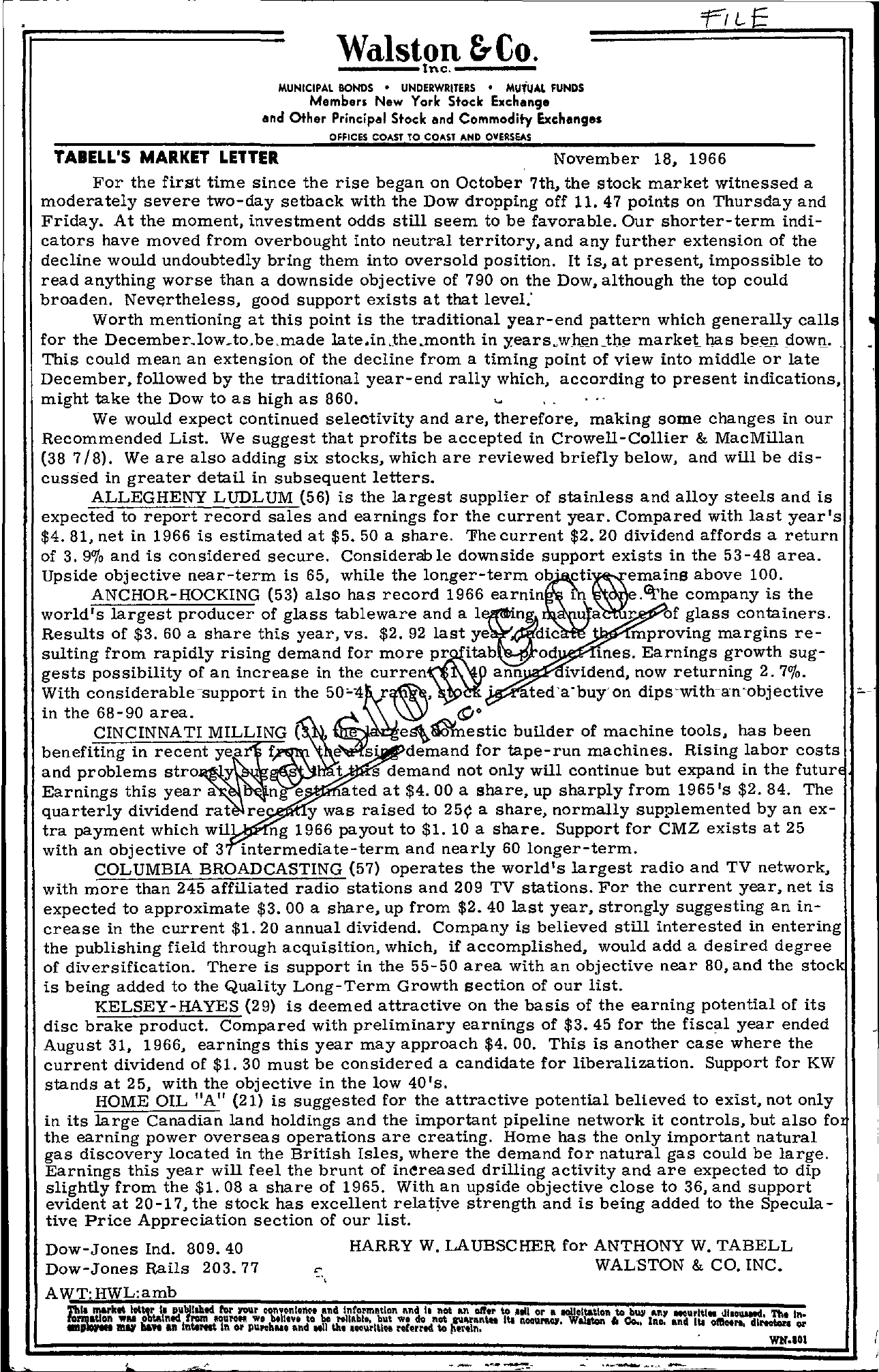 Walston &reo. —-Inc. ;…-..;…;.. MUNICIPAL BONOS UNDERWRITUS MuTu4l. FUNDS Members New York Stock Exchange and Other Principal Stock and Commodity Exchange. TABELL'S MARKET LETTER OFFICES COAST TO COAST AND OVERSEAS November 18, 1966 For the first time since the rise began on October 7th, the stock market witnessed a moderately severe two-day setback with the Dow dropping off 11. 47 points on Thursday and Friday. At the moment, investment odds still seem to be favorable. Our shorter-term indicators have moved from overbought into neutral territory, and any further extension of the decline would undoubtedly bring them into oversold position. It is, at present, impossible to read anything worse than a downside objective of 790 on the Dow, although the top could broaden. Nevertheless, good support exists at that level Worth mentioning at this point is the traditional year-end pattern which generally calls for the December.lowto.be.made late.in.the.month in market has d o w l l. . This could mean an extension of the decline from a timing point of view into middle or late December, followed by the traditional year-end rally which, according to present indications, might take the Dow to as high as 860. We would expect continued selectivity and are, therefore, making some changes in our Recommended List. We suggest that profits be accepted in Crowell-Collier & MacMillan (38 7/8). We are also adding six stocks, which are reviewed briefly below, and will be dis- cussed in greater detail in subsequent letters. ALLEGHENY LUDLUM (56) is the largest supplier of stainless and alloy steels and is expected to report record sales and earnings for the current year. Compared with last year's 4.81, net in 1966 is estimated at 5. 50 a share. 'Fhecurrent 2.20 dividend affords a return of 3.910 and is considered secure. Considerable downside support exists in the 53-48 area. Upside objective near-term is 65, while the longer-term cumemains above 100. ANCHOR-HOCKING (53) also has record 1966 earnin m e.Gf'he company is the world's largest producer of glass tableware and a a of glass containers. Results of 3. 60 a share this year, vs. 2. 92 last ye tiic mproving margins re- sulting from rapidly rising demand for itab od meso Earnings growth sug- ge.sts of an in curren .ann. iridend, 2 710 Wlth conslderable-support m the 50-4 ated a buy on dlPS-Wlth an obJective in the 68-90 area. W tJo CINCINNATI MILLING ( builder of machine tools, has been and problems stro t s demand not only will continue but expand in the futur Earnings this year a 'n e ated at 4.00 a share, up sharply from 1965's 2.84. The quarterly dividend rat re y was raised to 25 a share, normally supplemented by an ex- tra payment which wil ng 1966 payout to 1. 10 a share. Support for CMZ exists at 25 with an objective of 3 intermediate-term and nearly 60 longer-term. COLUMBIA BROADCASTING (57) operates the world's largest radio and TV network, with more than 245 affiliated radio stations and 209 TV stations. For the current year, net is expected to approximate 3.00 a share, up from 2.40 last year, strongly suggesting an in- crease in the current 1. 20 annual dividend. Company is believed still interested in entering the publishing field through acquisition, which, if accomplished, would add a desired degree of diversification. There is support in the 55-50 area with an objective near 80, and the stoc is being added to the Quality Long-Term Growth section of our list. KELSEY-HAYES (29) is deemed attractive on the basis of the earning potential of its disc brake product. Compared with preliminary earnings of 3. 45 for the fiscal year ended August 31, 1966, earnings this year may approach 4. 00. This is another case where the current dividend of 1. 30 must be considered a candidate for liberalization. Support for KW stands at 25, with the objective in the low 40's. HOME OIL A (21) is suggested for the attractive potential believed to exist, not only in its large Canadian land holdings and the important pipeline network it controls, but also fo the earning power overseas operations are creating. HOme has the only important natural gas discovery located in the British Isles, where the demand for natural gas could be large. Earnings this year will feel the brunt of inereased drilling activity and are expected to dip slightly from the 1. 08 a share of 1965. With an upside objective close to 36, and support evident at 20-17, the stock has excellent strength and is being added to the Specula- tive Price Appreciation section of our list. Dow-Jones Ind. 809.40 HARRY W. LAUBSCHER for ANTHONY W. TABELL Dow-Jones Rails 203.77 '-.. WALSTON & CO. INC. AWTHWLamb 'ftl. markft latter t. Ju.b1IIlltd. tor VDUl' linand lntormlltlon I'.nd t. not An oItl' to or .. IOIloltaon to bUl Aft, urIU.. I1IIOUIId 'I't\e In fol'lQltlon …1Ii IOUl'CItI WI btllt' to be HlIAblo. but Wt do not I\lIUAnW Itl llOQu.nu. Waliton 00., lno. and Ita dot…. dlNoton …..,.. ., WI U atutR ht 01' punhut And 1111 thl 1000\ultlH l'tftrHd. to . WN.101