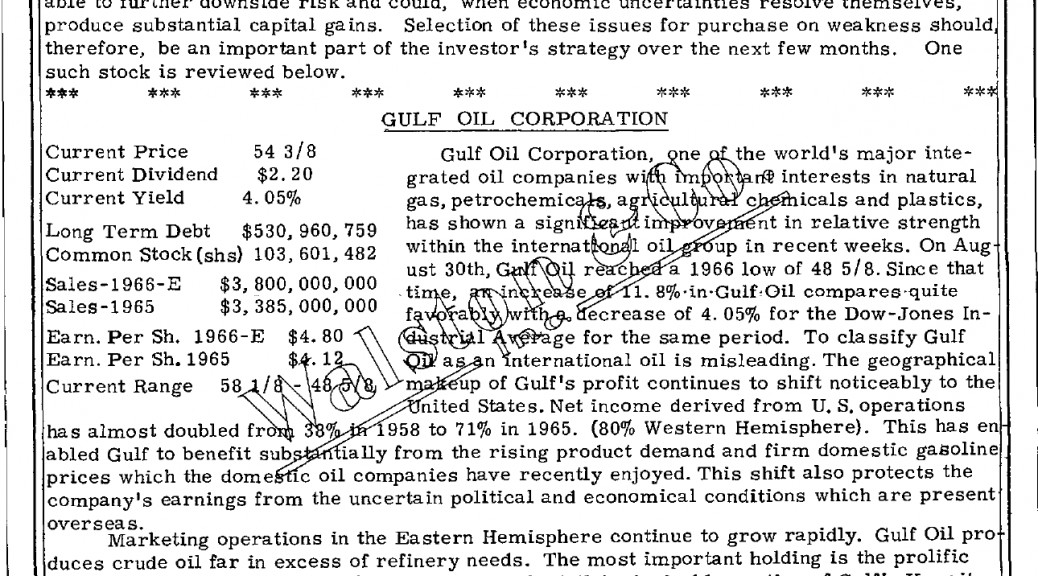 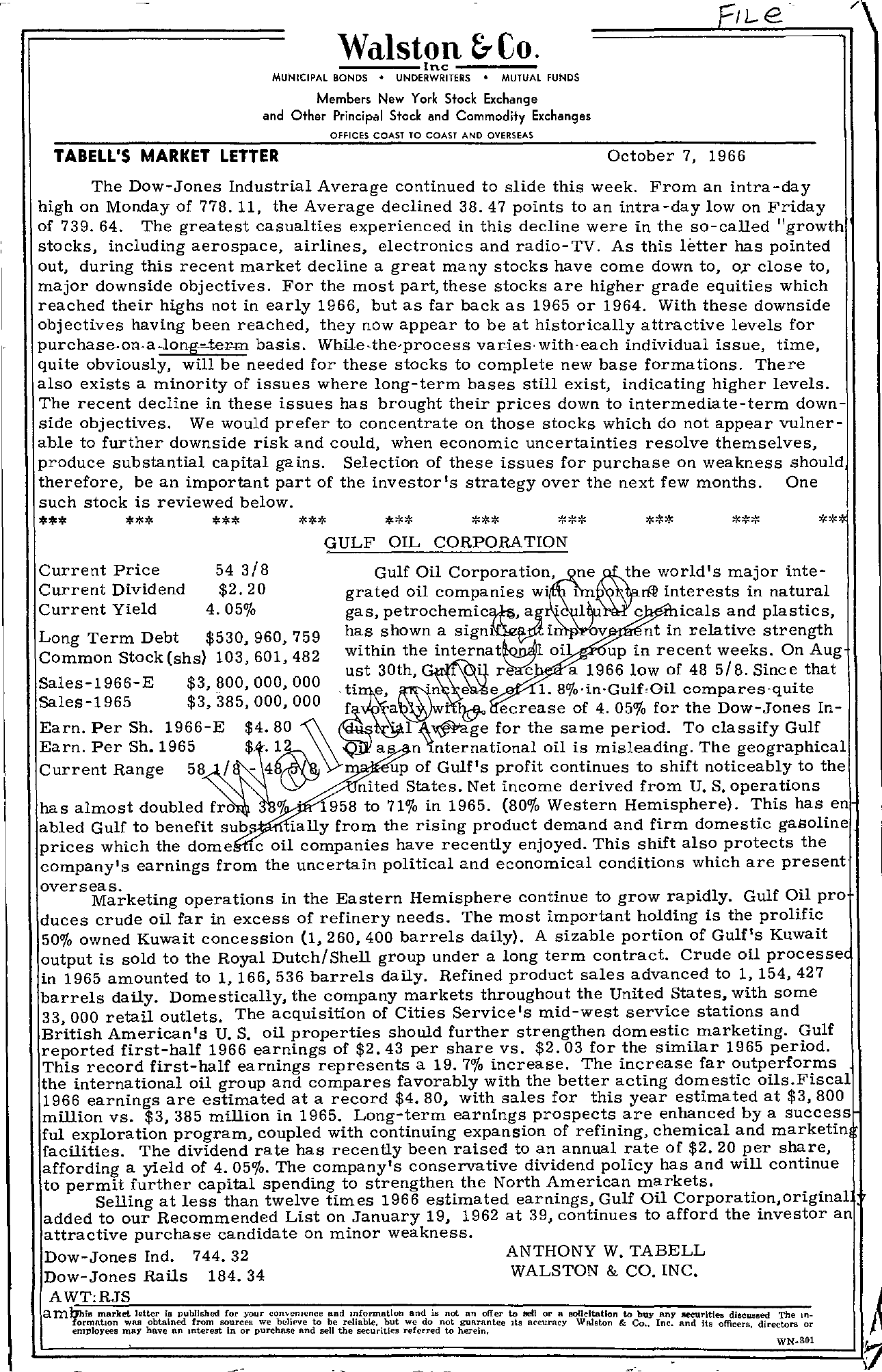 Walston &- Co. –,;…….. Inc MUNICIPAL SONDS UNDERWRITERS MUTUAL FUNDS Members New York Stock Exchange and Other Principal Stock and Commodity Exchanges OFfiCES COAST TO COAST AND OVERSEAS TABEll'S MARKET lETTER I L. e. October 7, 1966 / The Dow-Jones Industrial Average continued to slide this week. From an intra-day high on Monday of 778.11, the Average declined 38.47 points to an intra-day low on Friday of 739.64. The greatest casualties experienced in this decline were in the so-called growth stocks, including aerospace, airlines, electronics and radio-TV. As this letter has pointed out, during this recent market decline a great many stocks have come down to, o,r close to, major downside objectives. For the most part, these stocks are higher grade equities which reached their highs not in early 1966, but as far back as 1965 or 1964. With these downside objectives having been reached, they now appear to be at historically attractive levels for purchase.or.l.a…lon-g4er-m basis. WhUe.the'process vaI'ies' witheach individual issue, time, quite obviously, will be needed for these stocks to complete new base formations. There also exists a minority of issues where long-term bases still exist, indicating higher levels. The recent decline in these issues has brought their prices down to intermediate-term downside objectives. We would prefer to concentrate on those stocks which do not appear vulnerable to further downside risk and could, when economic uncertainties resolve themselves, produce substantial capital gains. Selection of these issues for purchase on weakness should therefore, be an important part of the investor's strategy over the next few months. One such stock is reviewed below. GULF OIL CORPORATION Current Price 54 3/8 Current Dividend 2.20 Current Yield 4. 05 Long Term Debt 530, 960, 759 Common Stock (shs) 103,601,482 Sales-1966-E 3 800 00 000 Gulf Oil grated oil companies w' gas, petrochemicy,l-s, 1 Iu world's major interffi interests in natural c icals and plastics, has shown a i ov nt in relative strength within the oi up in recent weeks. On Aug ust 30th, a 1966 low of 48 5/8. Since that Sales-1965 ;3 385 000 In- Earn. Per Sh. 1966-E 4. 80 for the same period. To classify Gulf Earn. Per Sh. 1965 a n'1nternational oil is misleading. The geographical Current Range 58 / – 4 up of Gulf's profit continues to shift noticeably to the nited States. Net income derived from U. S. operations has almost doubled fro 1958 to 710/0 in 1965. (80 Western Hemisphere). This has en abled Gulf to benefit sub ially from the rising product demand and firm domestic gasoline prices which the dome lC oil companies have recently enjoyed. This shift also protects the company's earnings from the uncertain political and economical conditions which are present overseas. Marketing operations in the Eastern Hemisphere continue to grow rapidly. Gulf Oil pro duces crude oil far in excess of refinery needs. The most important holding is the prolific 50 owned Kuwait concession (1,260,400 barrels daily). A sizable portion of Gulf's Kuwait output is sold to the Royal Dutch/Shell group under a long term contract. Crude oil processe in 1965 amounted to 1,166,536 barrels daily. Refined product sales advanced to 1,154,427 barrels daily. Domestically, the company markets throughout the United States, with some 33,000 retail outlets. The acquisition of Cities Service's mid-west service stations and British American's U. S. oil properties should further strengthen domestic marketing. Gulf reported first-half 1966 earnings of 2.43 per share vs. 2.03 for the similar 1965 period. This record first-half earnings represents a 19.7 increase. The increase far outperforms the international oil group and compares favorably with the better acting domestic oils.Fiscal 1966 earnings are estimated at a record 4.80, with sales for this year estimated at 3,800 million vs. 3,385 million in 1965. Long-term earnings prospects are enhanced by a success ful exploration program, coupled with continuing expansion of refining, chemical and marketin facilities. The dividend rate has recently been raised to an annual rate of 2. 20 per share, affording a yield of 4.050/0. The company's conservative dividend policy has and will continue to permit further capital spending to strengthen the North American markets. Selling at less than twelve times 1966 estimated earnings, Gulf Oil Corporation,original added to our Recommended List on January 19, 1962 at 39, continues to afford the investor an attractive purchase candidate on minor weakness. Dow-Jones Ind. 744.32 Dow-Jones Rails 184. 34 ANTHONY W. TABELL WALSTON & CO. INC. AWTRJS am mis market letter Is published for your and information and is not I'\n offer to gei1 or a solicitation to buy any AeeUl'lties dlseuslled The Ln- was obtained from sources we bt'1il've to be reliable.. but we do not guarantl!e- Ita accuracy WalstQn & Co.. Inc. and its officers directQrs or eml'loyeea may ha.ve an anterest In or purchase- and sell the securities referred to herein. . WNBI)l J