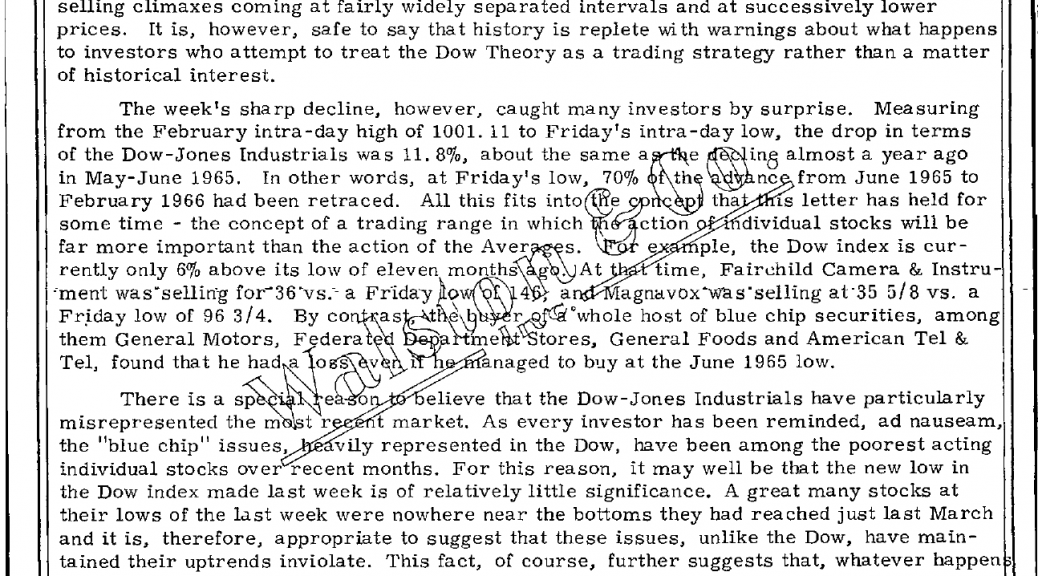 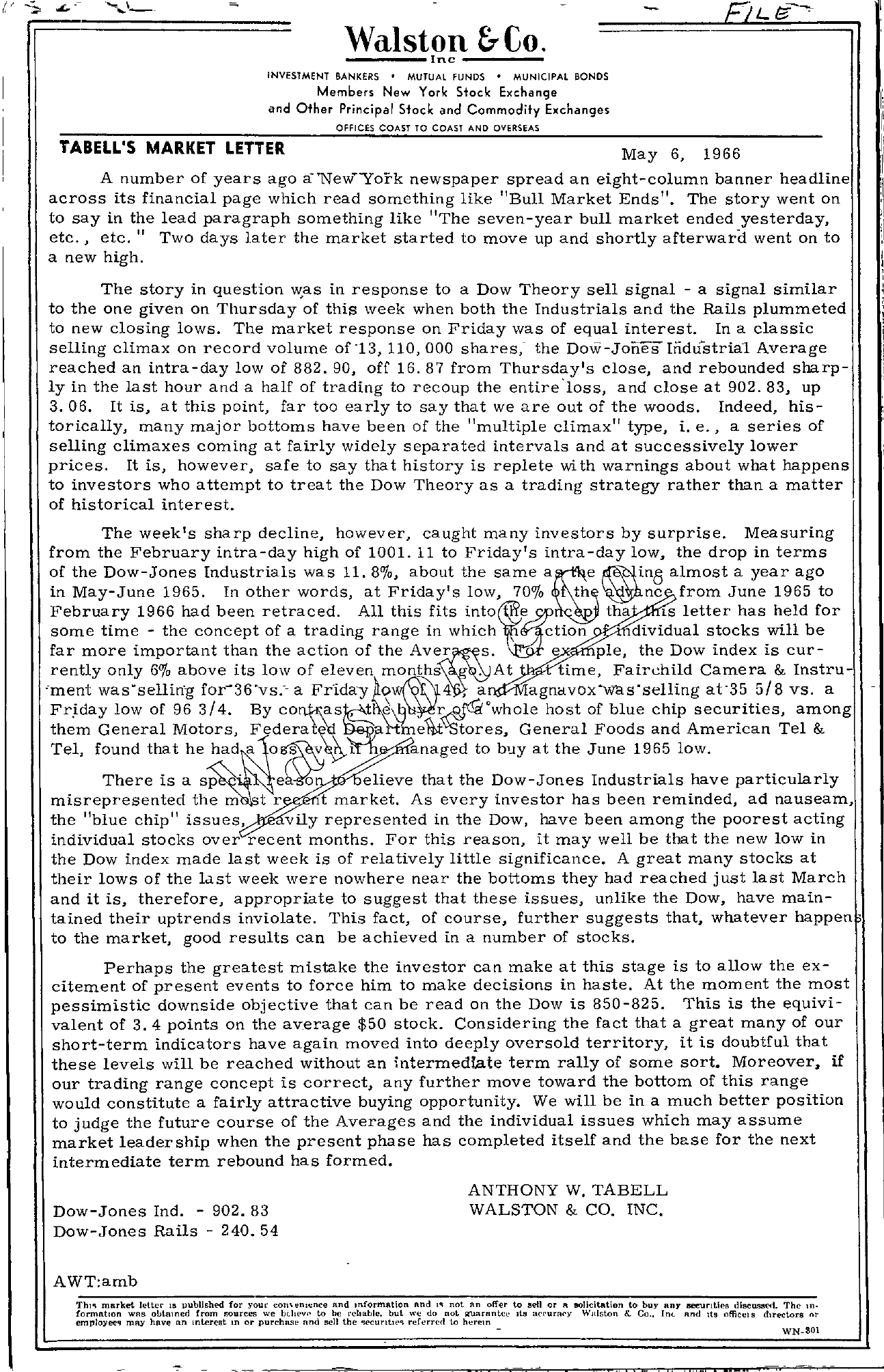 Lr – Walston &- Co. Inc INVESTMENT BANKERS MUTUAL FUNDS MUNICIPAL BONOS Members New York Stock Exchange and Other Principal Stock and Commodity Exchanges OFFICES COAST TO COAST AND OVERSEAS TABELL'S MARKET LETTER May 6, 1966 A number of years ago a 'New-York newspaper spread an eight-column banner headline across its financial page which read something like Bull Market Ends. The story went on to say in the lead paragraph something like The seven-year bull market ended yesterday, etc., etc. Two days later the market started to move up and shortly afterward went on to a new high. The story in question in response to a Dow Theory sell signal – a signal similar to the one given on Thursday of this week when both the Industrials and the Rails plummeted to new closing lows. The market response on Friday was of equal interest. In a classic selling climax on record volume of '13,110,000 shares,- the Dow-Jones Industrial Average reached an intra-day low of 882.90, off 16.87 from Thursday's close, and rebounded sharp- ly in the last hour and a half of trading to recoup the entire'loss, and close at 902.83, up 3.06. It is, at this point, far too early to say that we are out of the woods. Indeed, his- torically, many major bottoms have been of the multiple climax type, i. e., a series of selling climaxes coming at fairly widely separated intervals and at successively lower prices. It is, however, safe to say that history is replete with warnings about what happens to investors who attempt to treat the Dow Theory as a trading strategy rather than a matter of historical interest. The week's sharp decline, however, caught many investors by surprise. Measuring from the February intra-day high of 1001. 11 to Friday's intra-day low, the drop in terms of the Dow-Jones Industrials was 11. 80/0, about the same almost a year ago in May-June 1965. In other words, at Friday's low, 70 th from June 1965 to February 1966 had been retraced. All this fits 5'P tha 1S letter has held for some time – the concept of a trading range in which .0lction dividual stocks will be far more important than the action of the e pIe, the Dow index is cur- rently onl! 6. aboveits, low of el.even months . At time, Fairchi.ld Camera & Instru- -ment was sellmg for 36 vs- a , a agnavox'was'seillng at-35 5/8 vs. a low of 96 3/4. By host of blue chip securities, among them General Motors, J meli.ttores, General Foods and American Tel & Tel, found that a anaged to buy at the June 1965 low. There is a sp' elieve that the Dow-Jones Industrials have particularly misrepresented the m t r t market. As every investor has been reminded, ad nauseam, the blue chip issues, vily represented in the Dow, have been among the poorest acting individual stocks over recent months. For this reason, it may well be that the new low in the Dow index made last week is of relatively little significance. A great many stocks at their lows of the last week were nowhere near the bottoms they had reached just last March and it is, therefore, appropriate to suggest that these issues, unlike the Dow, have main- tained their uptrends inviolate. This fact, of course, further suggests that, whatever happen to the market, good results can be achieved in a number of stocks. Perhaps the greatest mistake the investor can make at this stage is to allow the excitement of present events to force him to make decisions in haste. At the moment the most pessimistic downside objective that can be read on the Dow is 850-825. This is the equivivalent of 3.4 points on the average 50 stock. Considering the fact that a great many of our short-term indicators have again moved into deeply oversold territory, it is doubtful that these levels will be reached without an intermedtate term rally of some sort. Moreover, if our trading range concept is correct, any further move toward the bottom of this range would constitute a fairly attractive buying opportunity. We will be in a much better position to judge the future course of the Averages and the individual issues which may assume market leadership when the present phase has completed itself and the base for the next intermediate term rebound has formed. Dow-Jones Ind. – 902. 83 Dow-Jones Rails – 240. 54 ANTHONY W. TABELL WALSTON & CO. INC. AWTamb Thl'l market letter IS llUblished for conenlcn('e nnd Information and 1; not fin offer to aell or R solicitation to buy Rny IleeUrltles discussed. The ill- formation WflS obtmncd from sources we bdlev, to he reliable. but we do not gl,larlintCI! Its 3('rumry &. Co., In/ nnd ltS officcls directors or may hnve an Interest In or purchase and sell the ;t'eunbe; referred to hcrem , i, –