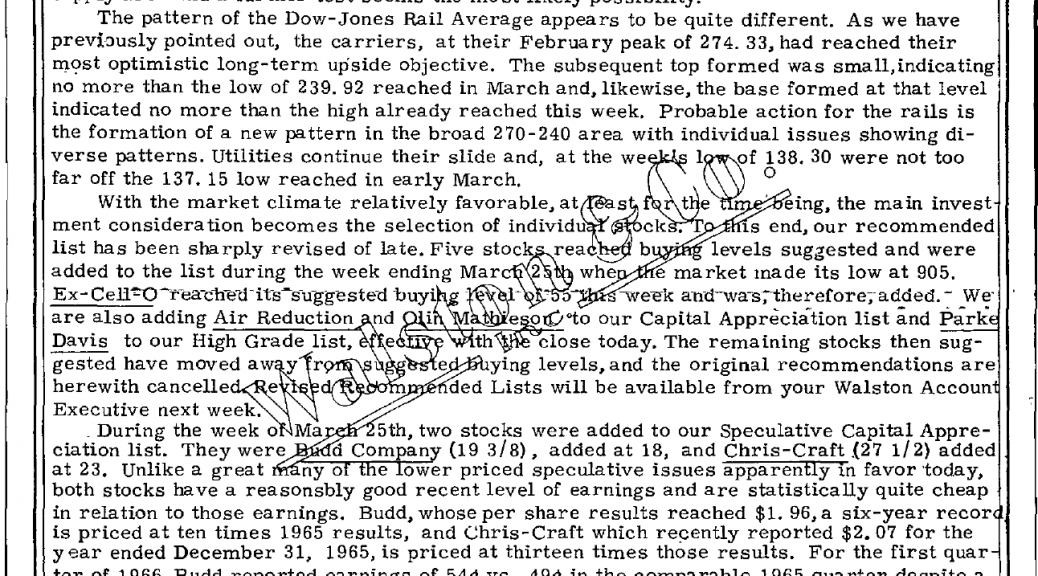 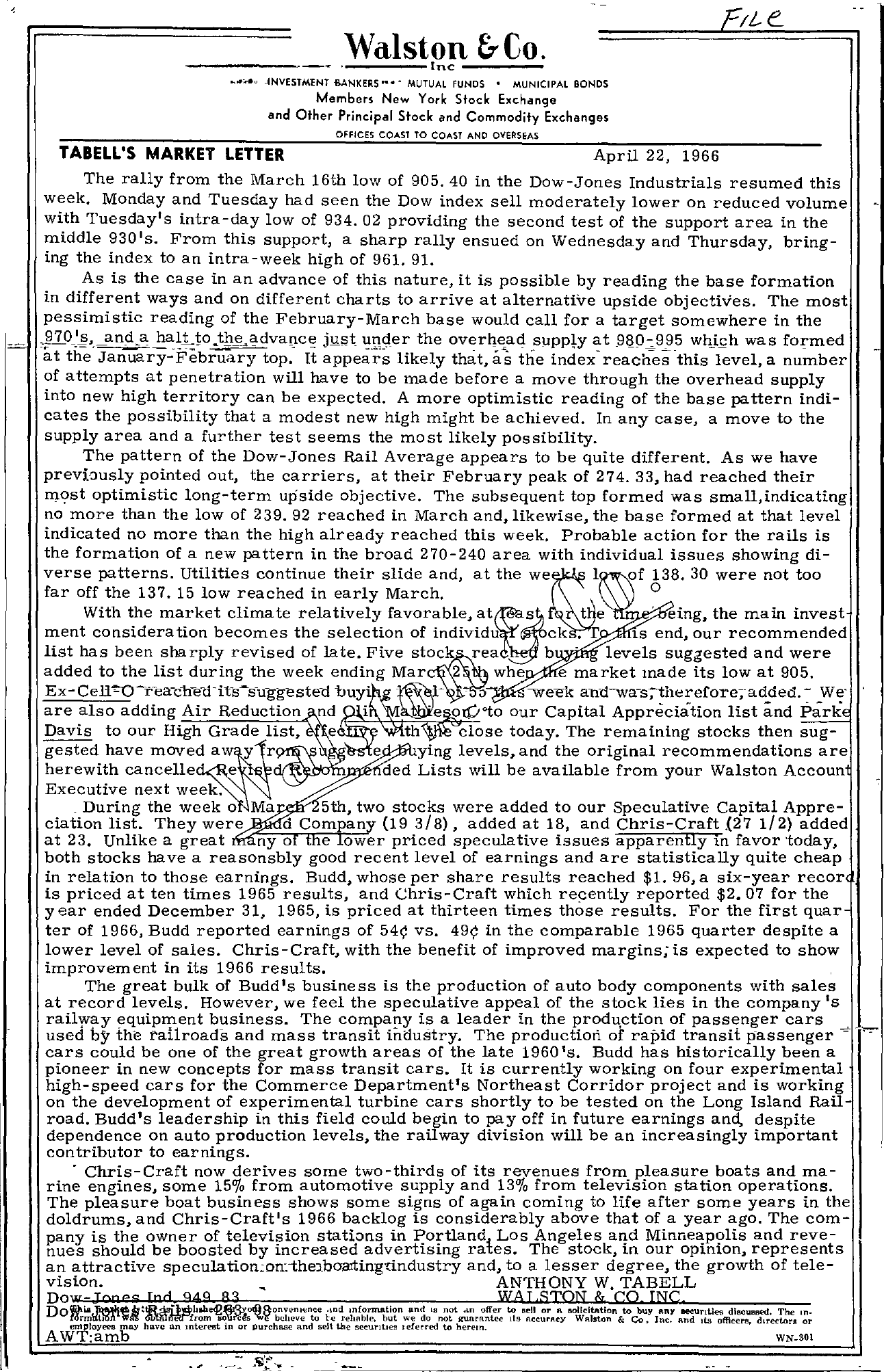 TABEll'S MARKET Walston &Co. —–Inc —– ……6u .INVESTMENT -BANKERS … MUTUAL FUNDS MUNICIPAL BONDS Members New York Siock Exchange and Other Principal Stock and Commodity Exchanges lETTER OFfiCES COAST TO COAST AND OVERSEAS April 22, 1966 The rally from the March 16th low of 905.40 in the Dow-Jones Industrials resumed this week. Monday and Tuesday had seen the Dow index sell moderately lower on reduced volume with Tuesday's intra-day low of 934.02 providing the second test of the support area in the middle 930 IS. From this support, a sharp rally ensued on Wednesday and Thursday, bringing the index to an intra-week high of 961. 91. As is the case in an advance of this nature, it is possible by reading the base formation in different ways and on different charts to arrive at alternative upside objectives. The most pessimistic reading of the February- March base would call for a target somewhere in the anda j1.lst 1!nger the whJch was formed at the January-February top. It appears likely that, as the index reaches this level, a number of attempts at penetration will have to be made before a move through the overhead supply into new high territory can be expected. A more optimistic reading of the base pattern indi- cates the possibility that a modest new high might be achieved. In any case, a move to the supply area and a further test seems the most likely possibility. The pattern of the Dow-Jones Rail Average appears to be quite different. As we have previausly pointed out, the carriers, at their February peak of 274. 33, had reached their most optimistic long-term upside objective. The subsequent top formed was small,indicating no more than the low of 239.92 reached in March and, likewise, the base formed at that level indicated no more than the high already reached this week. Probable action for the rails is the formation of a new pattern in the broad 270-240 area with individual issues showing di- verse patterns. Utilities continue their slide and, at the far off the 137. 15 low reached in early March. 138.30 were not too 0 With the market climate relatively favorable, a t a t e 'eing, the main invest ment consideration becomes the selection of individu ck . 1S end, our recommended list has been sharply revised of late. Five rea b – levels suggested and were added to the list during the week ending Mar 2 whe e market made its low at 905. -;)' -we-e-k aml-was;-therefore;added. – We- are also adding Air Reduction nd i 01010 our Capital Appreciation list and Park Davis to our High Grade list, th'il close tOday. The remammg stocks then sug- gested have r herewith cancelle e eying levels, and the original recommendations are ded Lists will be available from your Walston Accoun Executive next week. , During the week 0 Ma 5th, two stocks were added to our Speculative Capital Appre- ciation list. They were d Compan (193/8), added at 18, and Chris-Craft .(27 1/2) added at 23. Unlike a great ny 0 e ower priced speculative issues apparently in favor today, both stocks have a reasonsbly good recent level of earnings and are statistically quite cheap in relation to those earnings. Budd, whose per share results reached 1. 96, a six-year recor is priced at ten times 1965 results, and Chris-Craft which reently reported 2.07 for the year ended December 31, 1965, is priced at thirteen times those results. For the first quar ter of 1966, Budd reported earnings of 54 vs. 49 in the comparable 1965 quarter despite a lower level of sales. Chris-Craft, with the benefit of improved margins; is expected to show improvement in its 1966 results. The great bulk of Budd's business is the production of auto body components with sales at record levels. However, we feel the speculative appeal of the stock lies in the company's rail'lVay business. The compa!ly is a leader in the prodll;ction of passenger cars used by the railroads and mass transit industry. The production of rapid transit passenger – — cars could be one of the great growth areas of the late 1960 IS. Budd has historically been a pioneer in new concepts for mass transit cars. It is currently working on four experimental high-speed cars for the Commerce Department's Northeast Corridor project and is working on the development of experimental turbine cars shortly to be tested on the Long Island Rail- road. Budd's leadership in this field could begin to payoff in future earnings and, despite dependence on auto production levels, the railway division will be an increasingly important contributor to earnings. . Chris-Craft now derives some two-thirds of its revenues from pleasure boats and ma- rine engines, some 15 from automotive supply and 13 from television station operations. The pleasure boat business shows some signs of again coming to life after some years in the doldrums, and Chris-Craft's 1966 backlog is considerably above that of a year ago. The com- pany is the owner of television stations in Portland Los Angeles and Minneapolis and revenues should be boosted by increased advertising rates. The stock, in our opinion, represents an attractive speculationcon-the1boarting!industry and, to a lesser degree, the growth of tele- vision. ANTHONY W. TABELL Dour-Iones In d 949 83 WALSTON & CO INC Do'iihl.a ''t&bf.litr'lRt-'from 1I0)1r'(t!S .. .Ind mformatlon and IS not .m offer to sell or 1\ solicitation to buy any Ile'eUrltiea dlscU8Sed. The Inbeheve to to! rehflble, but we do not guarantee Its nccuracy Walston & Co, Inc. and Its officers, Clrcetors or en1..Jloyees may have an Interest in or Purchase and selt the I eferred to herem. A WTamb WN30'