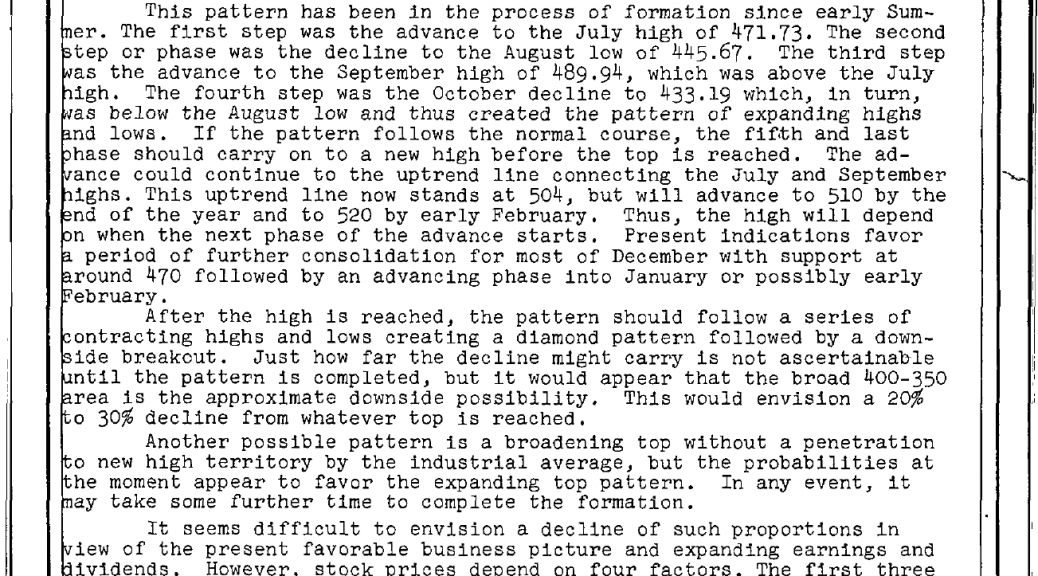 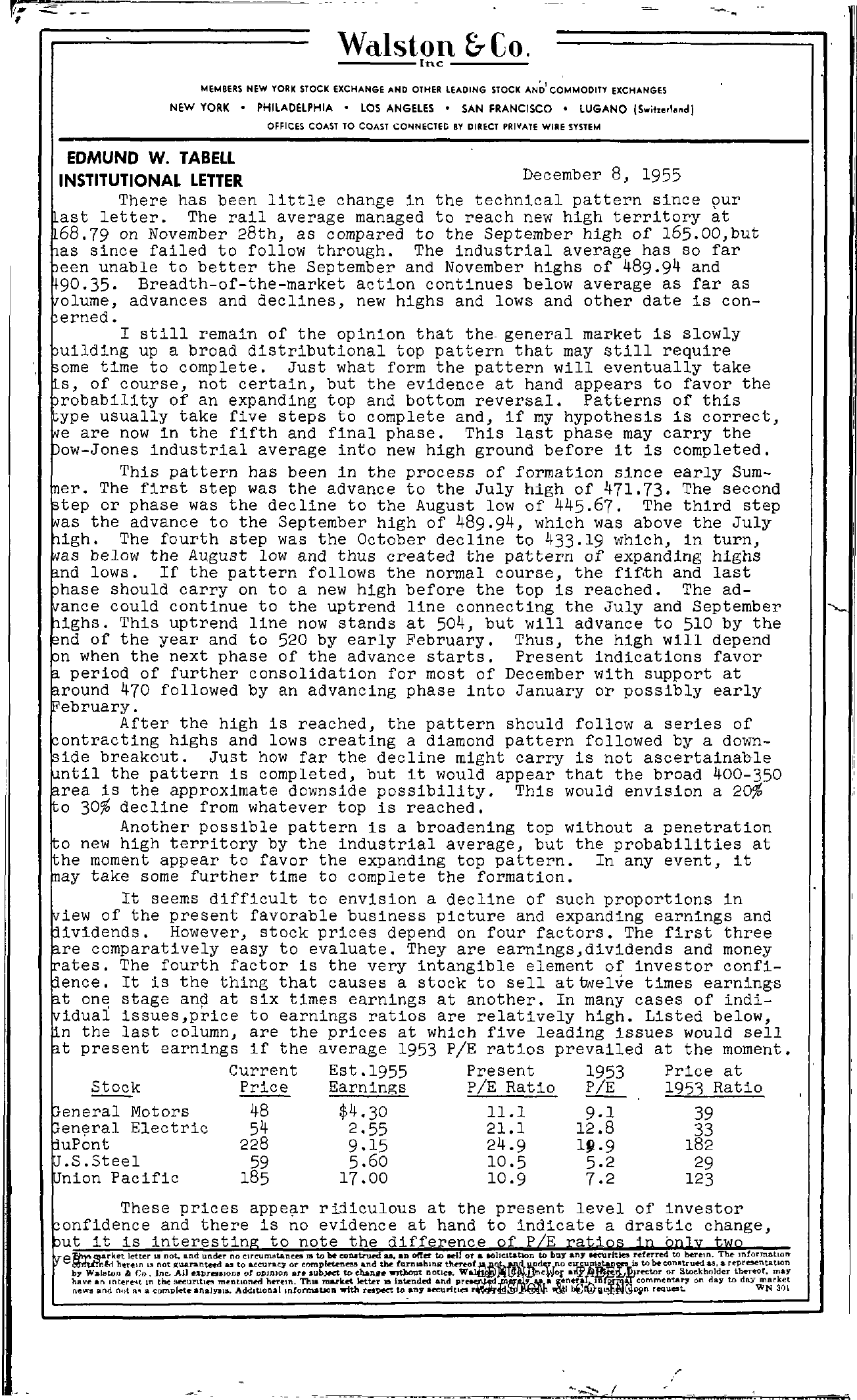 ,… – — Walston &Co. —-Inc —- ,, …. EMBERS NEW YORI( STOCK EXCHANGE AND OTHER lEADING STOCK AND COMMODITY EXCHANGES NEW YORK PHILADELPHIA LOS ANGELES SAN FRANCISCO LUGANO (Sw;',Id) OFFICES COAST TO COAST BY DIRECT PRIVATE WIRE SYSTEM –. EDMUND W. TABELL INSTITUTIONAL LETTER December 8, 1955 There has been little change in the technical pattern since ast letter. The rail average managed to reach new high territory at .68.79 on November 28th, as compared to the September high of 165.00,but .las since failed to follow through. The industrial average has so far unable to better the September and November highs of 489.94 and 90.35. Breadth-of-the-market action continues below average as far as iTolume, advances and declines, new highs and lows and other date is conerned. I still remain of the opinion that the. general market is slowly up a broad distributional top pattern that may still require some time to complete. Just what form the pattern will eventually take s, of course, not certain, but the evidence at hand appears to favor the of an expanding top and bottom reversal. Patterns of this oype usually take five steps to complete and, if my hypothesis is correct, fle are now in the fifth and final phase. This last phase may carry the Dow-Jones industrial average into new high ground before it is completed. This pattern has been in the process of formation since early Sumner. The first step was the advance to the July high of 471.73. The second step or phase was the decline to the August low of 445.67. The third step flas the advance to the September high of 489.94, which was above the July high. The fourth step was the October decline to 433.19 which, in turn, was below the August low and thus created the pattern of expanding highs nd lows. If the pattern follows the normal course, the fif.th and last should carryon to a new high before the top is reached. The advance could continue to the uptrend line connecting the July and September highs. This uptrend line now stands at 504, but will advance to 510 by the end of the year and to 520 by early February. Thus, the high will depend on when the next phase of the advance starts. Present indications favor a period of further consolidation for most of December with support at around 470 followed by an advancing phase into January or possibly early ,ebruary. After the high is reached, the pattern should follow a series of contracting highs and lows creating a diamond pattern followed by a downside breakout. Just how far the decline might carry is not ascertainable until the pattern is completed, but it would appear that the broad 400-350 area is the approximate downside possibility. This would envision a 20 30 decline from whatever top is reached. Another possible pattern is a broadening top without a penetration 00 new high territory by the industrial average, but the probabilities at he moment appear to favor the expanding top pattern. In any event, it nay take some further time to complete the formation. It seems difficult to enVision a decline of such proportions in view of the present favorable bUSiness picture and expanding earnings and dividends. However, stock prices depend on four factors. The first three are comparatively easy to evaluate. They are earnings,dividends and money rates. The fourth factor is the very intangible element of investor confidence. It is the thing that causes a stock to sell atuflelve times earnings at stage an at six times earnings at another. In many cases of individual issues,price to earnings ratios are relatively high. Listed below, the last column, are the prices at which five leading issues would sell at present earnings if the average 1953 PIE ratios prevailed at the moment. Stock Current Est.1955 Price Earnings Present 1953 PiE Ratio PiE Price at 1951 Ratio General Motors General Electric duPont Pacific 48 54 228 59 185 4.30 2.55 9.15 5.60 17.00 11.1 21.1 24.9 10.5 10.9 9.1 12.8 lY.9 5.2 7.2 39 33 182 29 123 These prices appear ridiculous at the present level of investor ponfidence and there is no evidence at hand to indicate a drastic change, piEpeut i t i s interesting to note the difference of r a t i o s in only twoletter !.!II riot. Ilnd untie!' no cJrI!umlltanceti III to be eon..tnIed as, aD oftII!!' to aT IOllcltaUon to btl,. any MC'Uritie5 referred to herem. The lnforrnallO,, not guaranteed lUI to ..eeurll.Cl' or cmnpletet\eg and the furnaslllnif is to Meo.nnrued &3, a representatum by Wahl ton II (;1), Je. AU teXprIUIOD!I or opInion are sub;eet. to change- WJt.hoa.t aotln. .lJlnCJo OT St.oe1cholder thereot. may have an Intere-t In the Heuntle'l mentioned 'h6etn. Tha multet. lrtter 11 iatornded and a commentary on day to day market news and not !\q a anal1'3ls. AddltJonal mtormaUOD 'llrith respect. to any ucuriues rWrt!l, 9Q;I request. WN 301