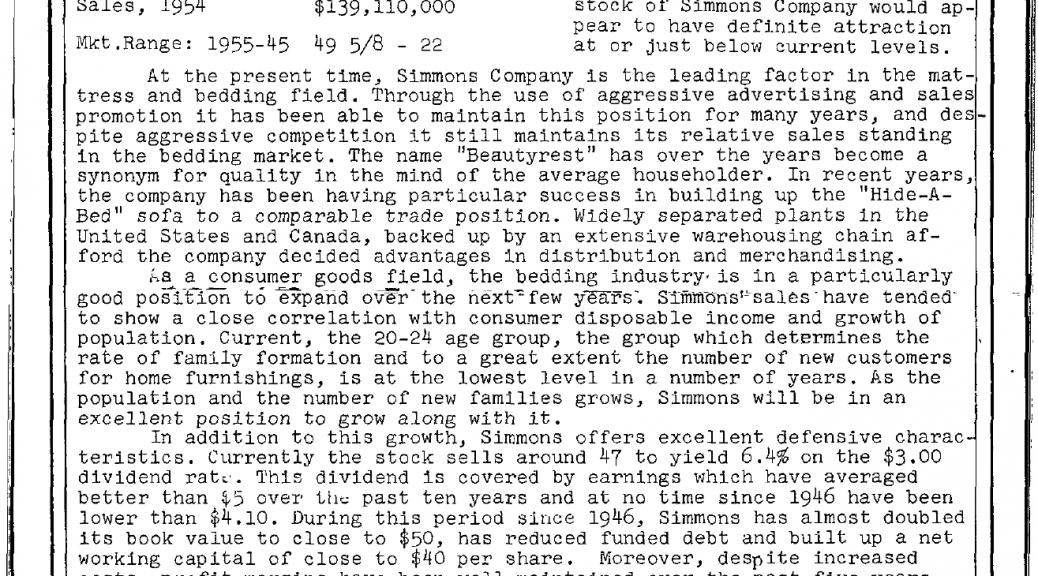 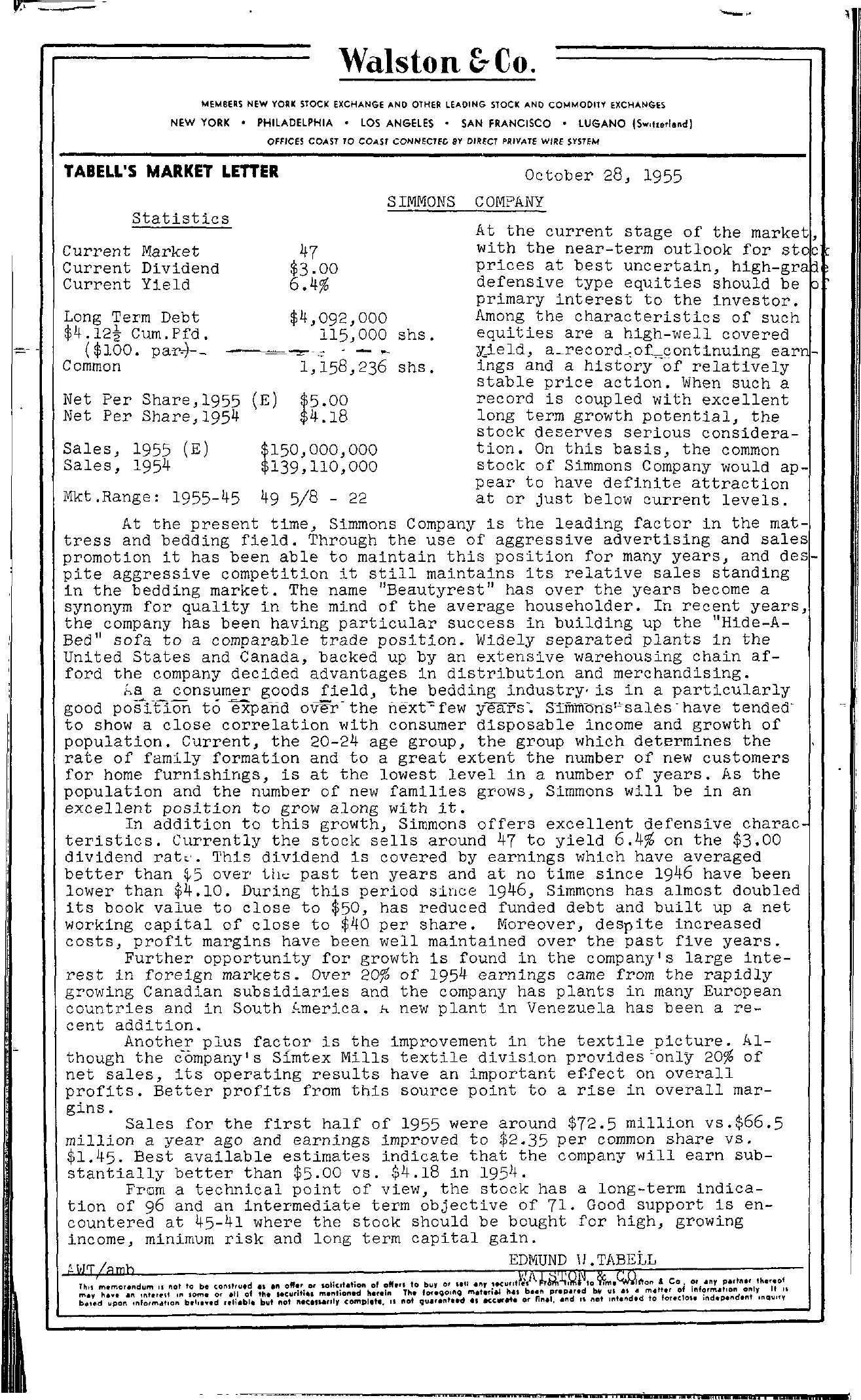 Walston &- Co. — MEMBERS NEW YORK STOCK EXCHANGE AND OTHER LEADING STOCK ANO COMMODITY EXCHANGES NEW YORK PHILADELPHIA LOS ANGElES SAN FRANCISCO LUGANO (Sw,I..d) OFFIces COAST TO COAST CONNECTE& 8'1' DIRECT PRIVATE WIRE SYSTEM TABELL'S MARKET LEnER October 28, 1955 Statistics SIMMONS Current Market Current Dividend Current Yield 47 3.00 6.4 Long Term Debt Cum.Pfd. (100. Common 4,092,000 -.1 15,-000. . shs. 1,158,236 shs. Net Per Share,1955 (E) 5.00 Net Per Share,1954 4.18 Sales, 1955 (E) Sales, 1954 150,000,000 139,110,000 Mkt.Range 1955-45 49 5/8 – 22 COMPANY At the current stage of the market, with the near-term outlook for stcc prices at best uncertain, defensive type equities should be h primary interest to the investor. Among the characteristics of such equities are a high-well covered Y.J-eld, arecord,ofcontinuing earrings and a history of relatively stable price action. When such a record is coupled with excellent long term growth potential, the stock deserves serious consideration. On this basis, the common stock of Simmons Company would appear to have definite attraction at or just below current levels. At the present time, Simmons Company is the leading factor in the mattress and bedding field. Through the use of aggressive advertising and sales promotion it has been able to maintain this position for many years, and despite aggressive competition it still maintains its relative sales standing in the bedding market. The name Beautyrest has over the years become a synonym for quality in the mind of the average householder. In recent years, the company has been having particular success in building up the Hide-ABed sofa to a comparable trade position. Widely separated plants in the United States and Canada, backed up by an extensive warehousing chain afford the company decided advantages in distribution and merchandising. hS a consumer goods field, the bedding industry' is in a particularly good to expand over- the next' few -have tended- to show a close correlation with consumer disposable income and growth of population. Current, the 20-24 age group, the group which determines the rate of family formation and to a great extent the number of new customers for home furnishings, is at the lowest level in a number of years. As the population and the number of new families grows, Simmons will be in an excellent position to grow along with it. In addition to this growth, Simmons offers excellent defenSive charac teristics. Currently the stock sells around 47 to yield 6.4 on the 3.00 dividend rat,'. This dividend is covered by earnings which have averaged better than over' til, past ten years and at no time since 1946 have been lower than 4.10. During this period since 1946, Simmons has almost doubled its book value to close to 50, has reduced funded debt and built up a net working capital of close to 40 per share. Moreover, despite increased costs, profit margins have been well maintained over the past five years. Further opportunity for growth is found in the company's large interest in foreign markets. Over 20 of 1954 earnings came from the rapidly growing Canadian subsidiaries and the company has plants in many European countries and in South hmerica. h new plant in Venezuela has been a recent addition. Another plus factor is the improvement in the textile picture. Although the company's Simtex Mills textile division provides 'only 20 of net sales, its operating results have an important ef.fect on overall profits. Better profits from this source point to a rise in overall mar- gins. Sales for the first half of 1955 were around 72.5 million vs.66.5 million a year ago and earnings improved to 2.35 per common share vs. 1.45. Best available estimates indicate that the company will earn sub- stantially better than 5.00 vs. 4.18 in 1954. FrGm a technical point of view, the stock has a long-term indica- tion of 96 and an intermediate term objective of 71. Good support is encountered at 45-41 where the stock should be bought for high, growing income, minimum risk and long term capital gain. AltEr lamb EDMUND \I.TABELL i.iiil.iL……….na U&ta ..mQ