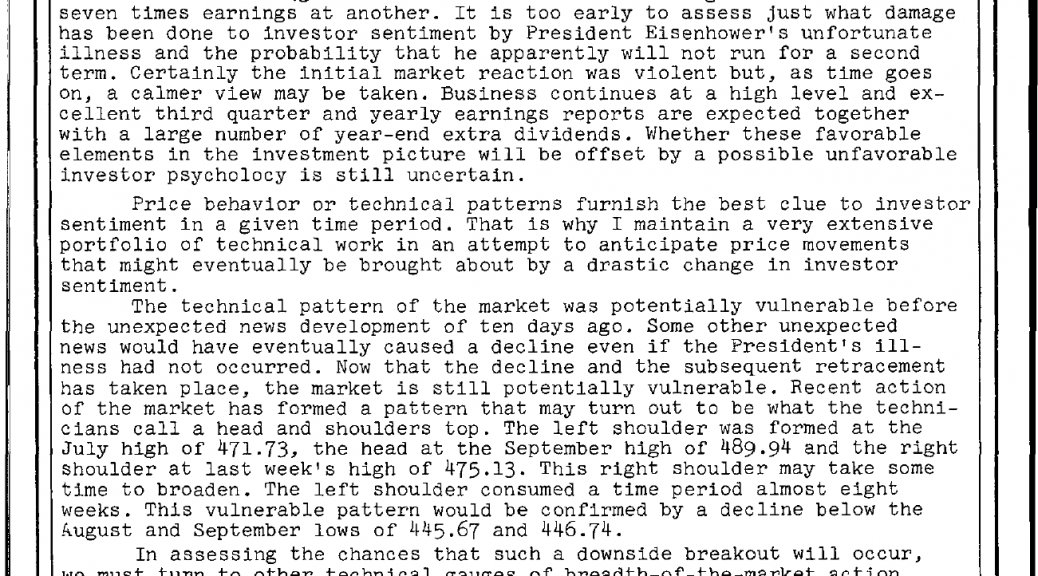 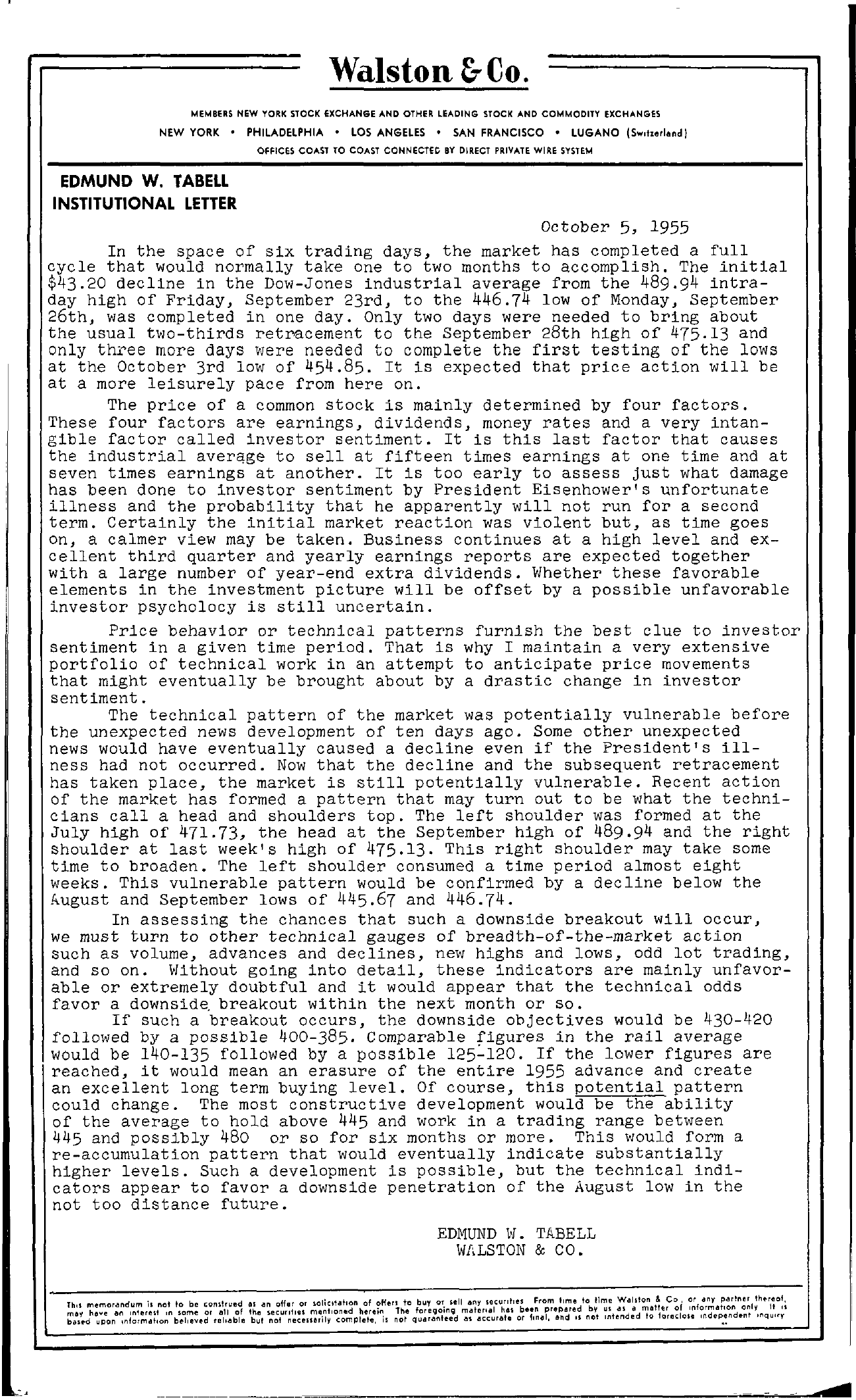 Walston 5- Co. MEMBERS NEW YORK STOCK EXCHANGE AND OTHER LEADING STOCK AND COMMODITY EXCHANGES NEW YORK PHILADELPHIA LOS ANGELES SAN FRANCISCO LUGANO (Sw,t…l.nd I OFFICES COAST TO COAST CONNECTEC BY DIRECT PRIVATE WIRE SYSTEM EDMUND W. TABELL INSTITUTIONAL LETTER October 5, 1955 In the space of six trading days, the market has completed a full cycle that would normally take one to two months to accomplish. The initial 43.20 decline in the Dow-Jones industrial average from the 489.94 intraday high of Friday, September 23rd, to the 446.74 low of Monday, September 26th, was completed in one day. Only two days were needed to bring about the usual two-thirds retDacement to the September 28th high of 475.13 and only three more days were needed to complete the first testing of the lows at the October 3rd low of 454.85. It is expected that price action will be at a more leisurely pace from here on. The price of a common stock is mainly determined by four factors. These four factors are earnings, dividends, money rates and a very intangible factor called investor sentiment. It is this last factor that causes the industrial average to sell at fifteen times earnings at one time and at seven times earnings at another. It is too early to assess just what damage has been done to investor sentiment by President Eisenhower's unfortunate illness and the probability that he apparently will not run for a second term. Certainly the initial market reaction was violent but, as time goes on, a calmer view may be taken. Business continues at a high level and excellent third quarter and yearly earnings reports are expected together with a large number of year-end extra dividends. Whether these favorable elements in the investment picture will be offset by a possible unfavorable investor psycholocy is still uncertain. Price behavior or technical patterns furnish the best clue to investor sentiment in a given time period. That is why I maintain a very extensive portfoliO of technical work in an attempt to anticipate price movements that might eventually be brought about by a drastic change in investor sentiment. The technical pattern of the market was potentially vulnerable before the unexpected news development of ten days ago. Some other unexpected news would have eventually caused a decline even if the President's ill- ness had not occurred. Now that the decline and the subsequent retracement has taken place, the market is still potentially vulnerable. Recent action of the market has formed a pattern that may turn out to be what the techni- cians call a head and shoulders top. The left shoulder was formed at the July high of 471.73, the head at the September high of 489.94 and the right shoulder at last week's high of 475.13. This right shoulder may take some time to broaden. The left shoulder consumed a time period almost eight weeks. This vulnerable pattern would be confirmed by a decline below the August and September lows of 445.67 and 446.74. In assessing the chances that such a downside breakout will occur, we must turn to other technical gauges of breadth-of-the-market action such as volume, advances and declines, new highs and lows, odd lot trading, and so on. Without going into detail, these indicators are mainly unfavor- able or extremely doubtful and it would appear that the technical odds favor a downside breakout within the next month or so. If such a breakout occurs, the downside objectives would be 430-420 followed by a possible 400-385. Comparable figures in the rail average would be 140-135 followed by a possible If the lower figures are reached, it would mean an erasure of the entire 1955 advance and create an excellent long term buying level. Of course, this potential pattern could change. The most constructive development would be the ability of the average to hold above 445 and work in a trading range between 445 and possibly 480 or so for six months or more. This would form a re-accumulation pattern that would eventually indicate substantially higher levels. Such a development is pOSSible, but the technical indi- cators appear to favor a downside penetration of the August low in the not too distance future. EDMUND If. TABELL W.LSTON & CO.