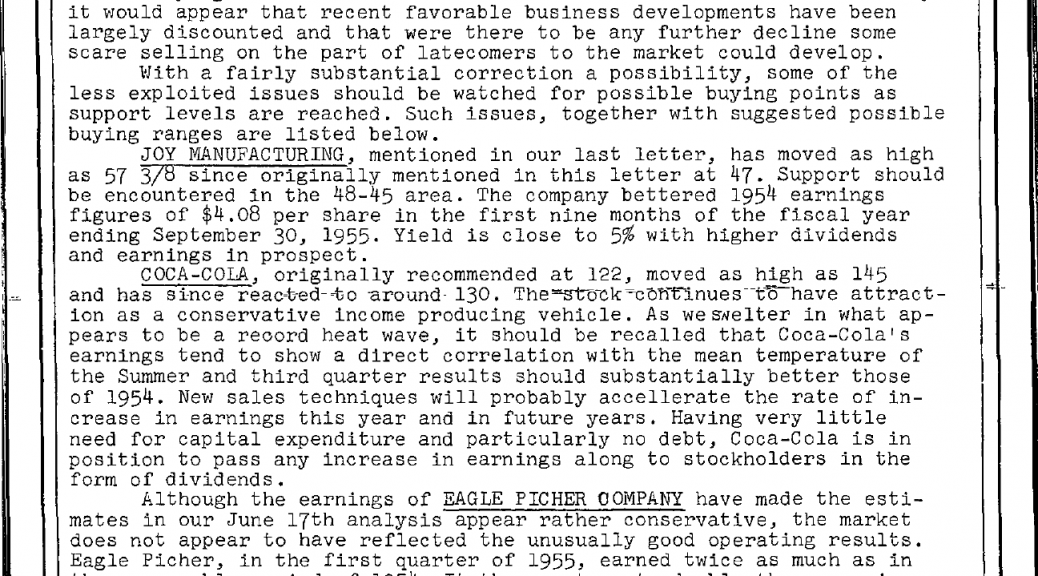 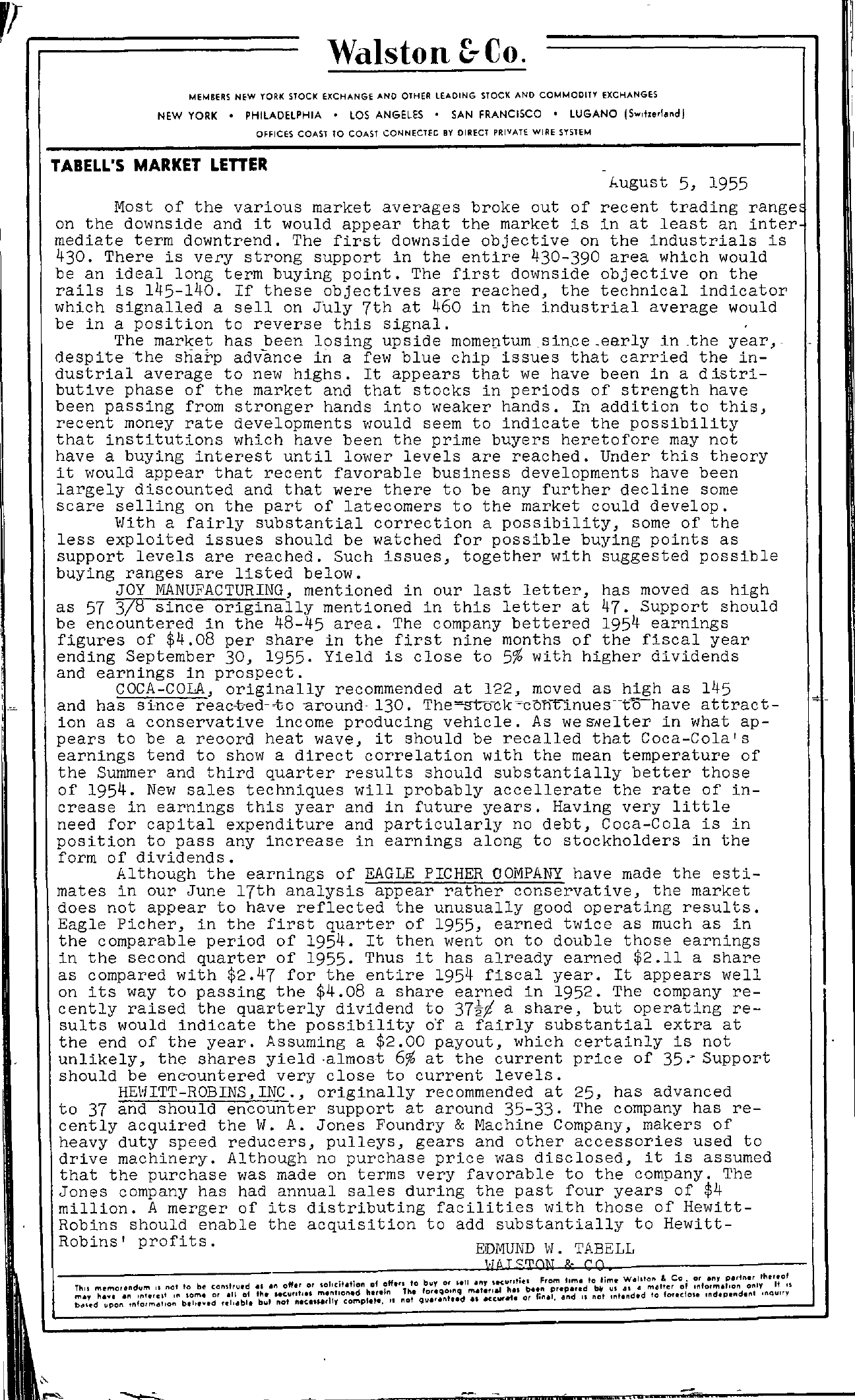 r'r; Walston &Co. MEMBERS NEW YORK STOCK EXCHANGE ANO OTHER LEADING STOCK AND COMMODITY EXCHANGES NEW YORK PHILADELPHIA LOS ANGELES SAN fRANCISCO LUGANO (Sw,t.Id( OFFICES COAST TO COAST CONNECTfC BY OIRECT PRIVATE WIRE SYSTEM TABEll'S MARKET lEnER hUgUSt 5, 1955 Most of the various market averages broke out of recent trading range on the downside and it would appear that the market is in at least an inter mediate term downtrend. The first downside objective on the industrials is 430. There is very strong support in the entire 430-390 area which would be an ideal long term buying pOint. The first downside objective on the rails is 145-140. If these objectives are reached, the technical indicator which signalled a sell on July 7th at 460 in the industrial average would be in a position to reverse this signal. The market has been losing upside momentum sin.ce ,early in the year,- despite the sharp advance in a few blue chip issues that carried the in- dustrial average to new highs. It appears that we have been in a distri- butive phase of the market and that stocks in periods of strength have been passing from stronger hands into weaker hands. In addition to this, recent money rate developments would seem to indicate the possibility that institutions which have been the prime buyers heretofore may not have a buying interest until lower levels are reached. Under this theory it would appear that recent favorable business developments have been largely discounted and that were there to be any further decline some scare selling on the part of latecomers to the market could develop. lith a fairly substantial correction a possibility, some of the less exploited issues should be watched for possible buying pOints as support levels are reached. Such issues, together with suggested possible buying ranges are listed below. JOY MANUFACTURING, mentioned in our last letter, has moved as high as 57 3/8 since originally mentioned in this letter at 47. Support should be encountered in the 48-45 area. The company bettered 1954 earnings figures of 4.08 per share in the first nine months of the fiscal year ending September 30, 1955. Yield is close to 5 with higher dividends and earnings in prospect. COCA-COLA, originally recommended at 122, moved as high as 145 and has Since reacoj,ed-oto -around 130. attract- ion as a conservative income producing vehicle. As in what ap- pears to be a reoord heat wave, it should be recalled that Coca-Cola's earnings tend to show a direct correlation with the mean temperature of the Summer and third quarter results should substantially better those of 1954. New sales techniques will probably accellerate the rate of in- crease in earnings this year and in future years. Having very little need for capital expenditure and particularly no debt, Coca-Cola is in position to pass any increase in earnings along to stockholders in the form of dividends. Although the earnings of EAGLE PICHER OOMPANY have made the esti- mates in our June 17th analysis appear rather conservative, the market does not appear to have reflected the unusually good operating results. Eagle Picher, in the first quarter of 1955, earned twice as much as in the comparable period of 1954. It then went on to double those earnings in the second quarter of 1955. Thus it has already earned 2.11 a share as compared with 2.47 for the entire 1954 fiscal year. It appears well on its way to passing the 4.08 a share earned in 1952. The company re- cently raised the quarterly dividend to a share, but operating re- sults would indicate the possibility o'f a fairly substantial extra at the end of the year. Assuming a 2.00 payout, which certainly is not unlikely, the shares yield -almost 6 at the current price of 35.' Support should be encDuntered very close to current levels. HEVIITT-ROBINS,INC., originally recommended at 25, has advanced to 37 and should encounter support at around 35-33. The company has re- cently acquired the W. A. Jones Foundry & Machine Company, makers of heavy duty speed reducers, pulleys, gears and other accessories used to drive machinery. Although no purchase price was disclosed, it is assumed that the purchase was made on terms very favorable to the company. The Jones company has had annual sales during the past four years of 4 million. A merger of its distributing facilities with those of Hewitt- Robins should enable the acquisition to add substantially to Hewitt- Robins' profits. EiJ)MUND TABELL lei AFTON Ik CQ , –……;.,