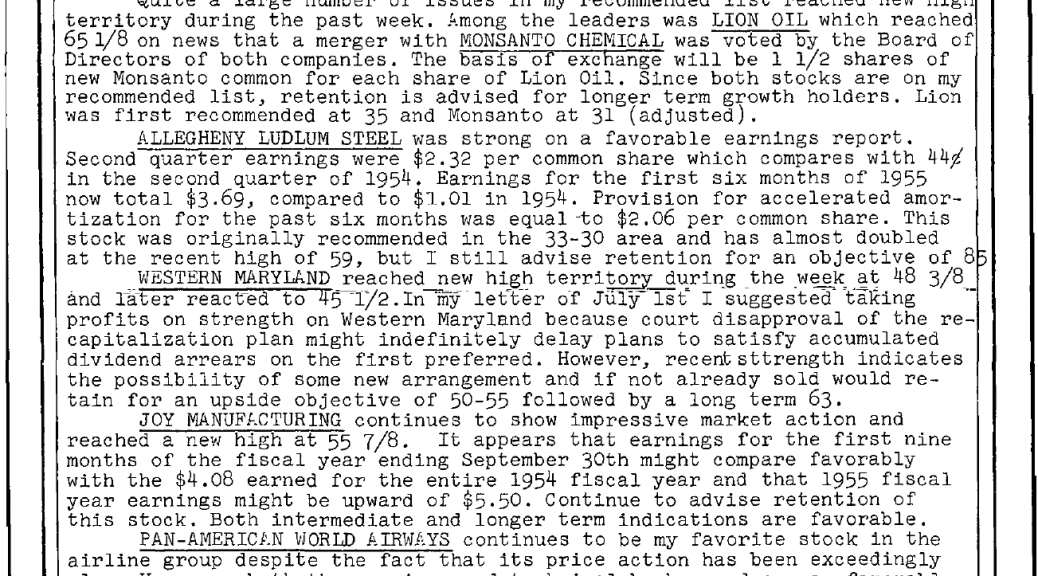 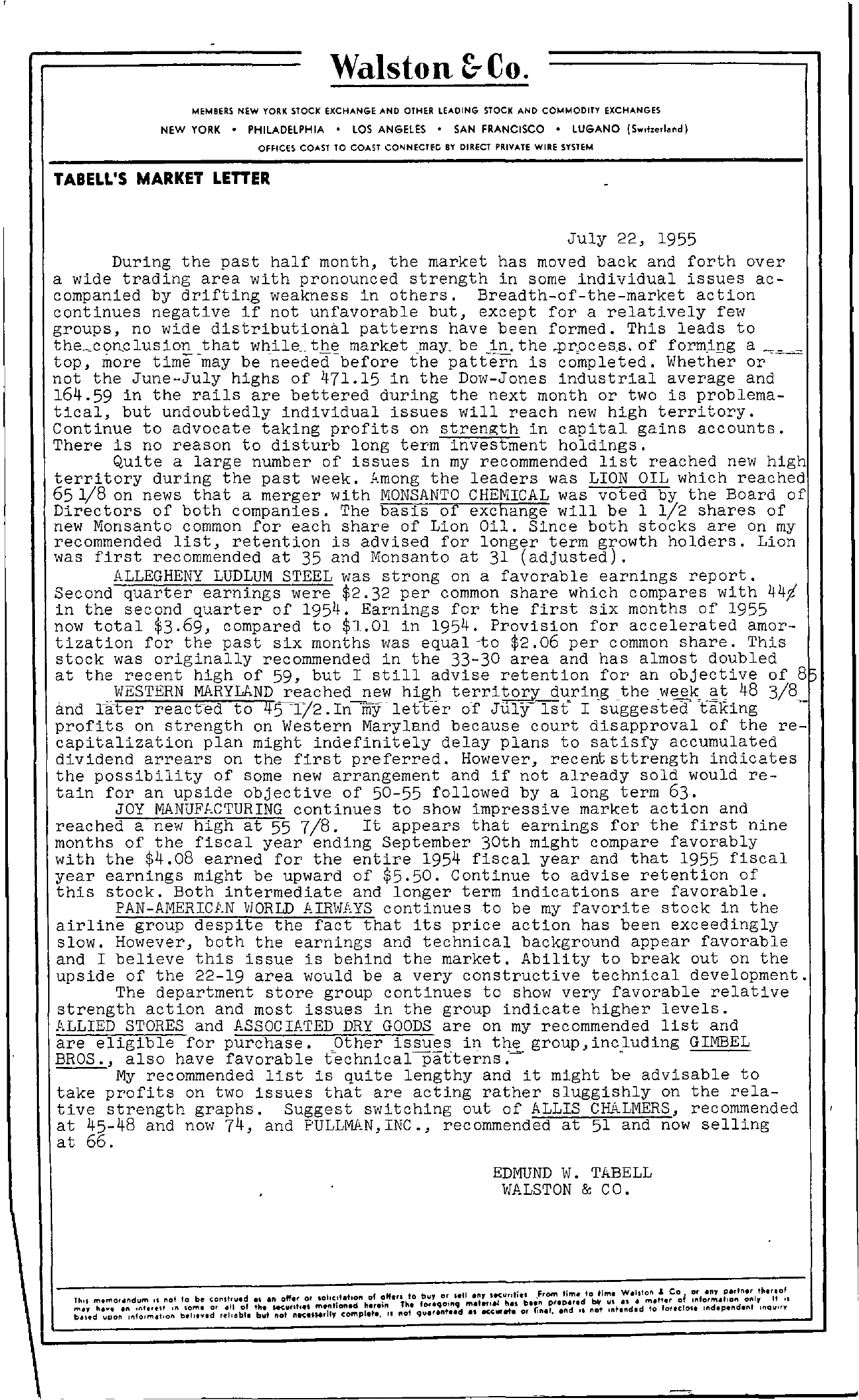 Walston &Co. MEMBERS NEW YORK STOCK eXCHANGE AND OTHER LEAOING STOCI( AND COMt.40DIT'I' EXCHANGES NEW YORK PHILADELPHIA LOS ANGELES SAN FRANCISCO LUGANO (Sw,hedd) OFFICES COAST TO COAST CO'lNECTE'C BY DIRECT PRIVATE WIRE SYSTEM TABELL'S MARKET LEnER July 22, 1955 During the past half month, the market has moved back and forth over a wide trading area with pronounced strength in some individual issues ac- companied by drifting weakness in others. Breadth-of-the-market action continues negative if not unfavorable but, except for a relatively few groups, no wide distributional patterns have been formed. This leads to that while the market may be in. the .pr.ocess. of forming a . top, more time 'may be -needed-before the patfe-rn is completed. Whether or not the June-July highs of 471.15 in the Dow-Jones industrial average and 164.59 in the rails are bettered during the next month or two is problema- tical, but undoubtedly individual issues will reach new high territory. Continue to advocate taking profits on strength in capital gains accounts. There is no reason to disturb long term investment holdings. Quite a large number of issues in my recommended list reached new high territory during the past week. Among the leaders was LION OIL which reached 651/8 on news that a merger with MONSANTO CHEMICAL was voted by the Board of Directors of both companies. The basis of exchange will be 1 1/2 shares of new Monsanto common for each share of Lion Oil. Since both stocks are on my recommended list, retention is advised for longer term growth holders. Lion was first recommended at 35 and Monsanto at 31 (adjusted). ALLEGHENY LUDLUM STEEL was strong on a favorable earnings report. Second quarter earnings were 2.32 per common share which compares with 447 in the second quarter of 1954. Earnings for the first six months of 1955 now total 3.69, compared to 1..01 in 1954. Provision for accelerated amor- tization for the past six months was equal to 2.06 per common share. This stock was originally recommended in the 33-30 area and has almost doubled at the recent high of 59, but I still advise retention for an objective of 8p and WESTERN MARYLAND reac hed rater reacted to 45 -1;2. In -my hlg.h territory dll.ring the week. 48 lener of July-1st I suggested taKing 3/8 profits on strength on Western Maryland because court disapproval of the re- capitalization plan might indefinitely delay plans to satisfy accumulated dividend arrears on the first preferred. However, recentsttrength indicates the possibility of some new arrangement and if not already sold would re- tain for an upside objective of 50-55 followed by a long term 63. JOY MANUFhCTURING continues to show impressive market action and reached a neVi high at 55 7/8. It appears that earnings for the first nine months of the fiscal year ending September 30th might compare favorably with the 4.08 earned for the entire 1954 fiscal year and that 1955 fiscal year earnings might be upward of 5.50. Continue to advise retention of this stock. Both intermediate and longer term indications are favorable. PAN-AMERIC,N WORLD AIRWAYS continues to be my favorite stock in the airline group despite the fact that its price action has been exceedingly slow. However, both the earnings and technical background appear favorable and I believe this issue is behind the market. Ability to break out on the upside of the 22-19 area would be a very constructive technical development. The department store group continues to show very favorable relative strength action and most issues in the group indicate higher levels. ALLIED STORES and ASSOCIATED DRY GOODS are on my recommended list and are eligible for purchase. Other issues in the group,including GIMBEL BROS., also have favorable My recommended list is quite lengthy and it might be advisable to take profits on two issues that are acting rather sluggishly on the rela- tive strength graphs. Suggest switching out of ALLIS recommended ' at 45-48 and now 74, and F'ULLMAN,INC., recommended at 51 and now selling at 66. EDMUND W. TABELL WALSTON & CO.