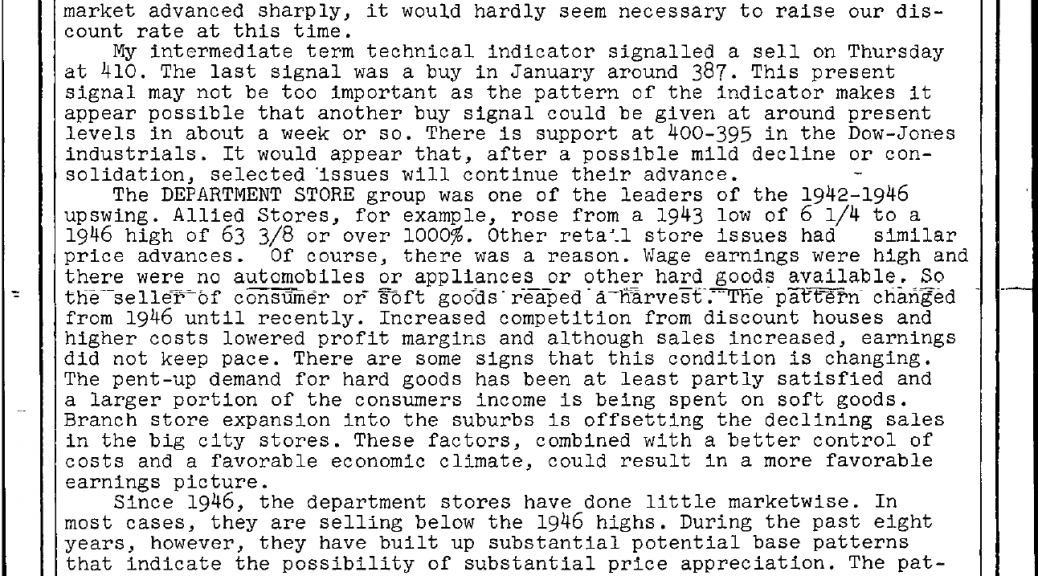 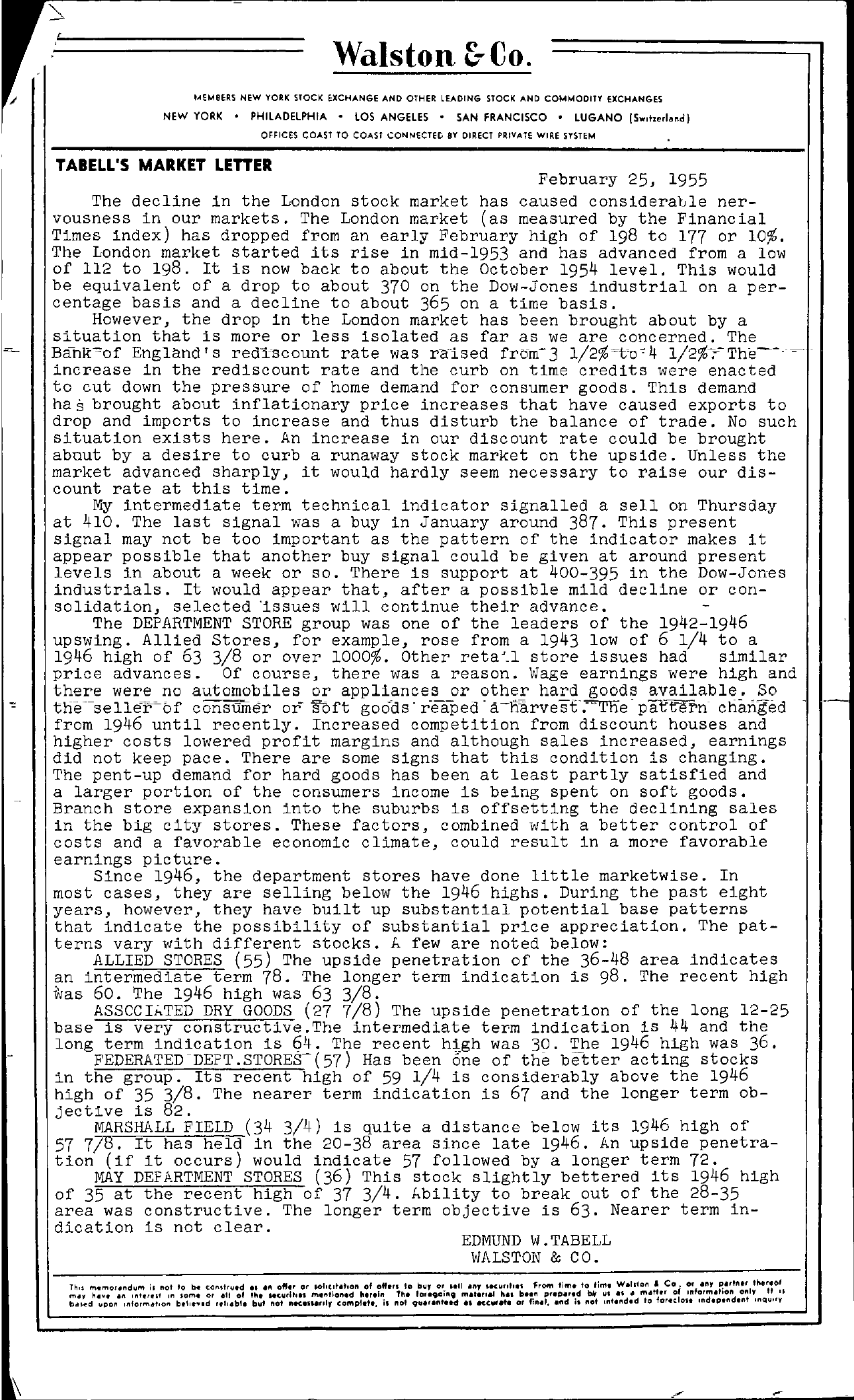 Walston &- Co. MEt.48ERS NEW YORK STOCK EXCHANGE AND OTHER LEADING STOCK AND COMt.400ITY EXCHANGES NEW YORK PHILADELPHIA LOS ANGELES SAN FRANCISCO LUGANO (Sw,t,ld) OFFICES COAST TO COAST COlNECTfC BY DIRECT PRIVATE WIRE SYSTEM TAB Ell'S MARKET lEnER February 25, 1955 The decline in the London stock market has caused consideraLle ner- vousness in our markets. The London market (as measured by the Financial Times index) has dropped from an early February high of 198 to 177 or 10. The London market started its rise in mid-1953 and has advanced from a low of 112 to 198. It is now back to about the October 1954 level. This would be equivalent of a drop to about 370 on the Dow-Jones industrial on a per- centage basis and a decline to about 365 on a time basis. However, the drop in the London market has been brought about by a situation that is more or less isolated as far as we are concerned. The England I s redIscount rate was raised from- 3 1/2t-0 7 4 1/2– – increase in the rediscount rate and the curb on time credits were enacted to cut down the pressure of home demand for consumer goods. This demand has brought about inflationary price increases that have caused exports to drop and imports to increase and thus disturb the balance of trade. No such situation exists here. An increase in our discount rate could be brought abuut by a desire to curb a runaway stock market on the upside. Unless the market advanced sharply, it would hardly seem necessary to raise our dis- count rate at this time. My intermediate term technical indicator signalled a sellon Thursday at 410. The last signal was a buy in January around 387. This present signal may not be too important as the pattern of the indicator makes it appear possible that another buy signal could be given at around present levels in about a week or so. There is support at 400-395 in the Dow-Jones industrials. It would appear that, after a possible mild decline or con- solidation, selected 'issues will continue their advance. – The DEPARTMENT STORE group was one of the leaders of the 1942-1946 upswing. Allied Stores, for example, rose from a 1943 low of 6 1/4 to a 1946 high of 63 3/8 or over 1000. Other reta.l store issues had similar price advances. Of course, there was a reason. Wage earnings were high and tthneer–esewlleerre- no bf acountosUmmoebrileosr or applianc soft goods – es or r-ea-pea other hard goods -a-rrarvest-Tl1e – paalv;ta-eirlna-bclhea. nSgeod – .- from 1946 until recently. Increased competition from discount houses and higher costs lowered profit margins and although sales increased, earnings did not keep pace. There are some signs that this condition is changing. The pent-up demand for hard goods has been at least partly satisfied and a larger portion of the consumers income is being spent on soft goods. Branch store expansion into the suburbs is offsetting the declining sales in the big city stores. These factors, combined with a better control of costs and a favorable economic climate, could result in a more favorable earnings picture. Since 1946, the department stores have done little marketwise. In most cases, they are selling below the 1946 highs. During the past eight years, however, they have built up substantial potential base patterns that indicate the possibility of substantial price appreCiation. The pat- terns vary with different stocks. h few are noted below ALLIED STORES (55) The upside penetration of the 36-48 area indicates an intermediate term 78. The longer term indication is 98. The recent high Was 60. 1946 high was 63 3/8. ASSCCIhTED DRY GOODS (27 7/8) The upside penetration of the long 12-25 base is very constructive.The intermediate term indication is 44 and the long term indication is 64. The recent high was 30. The 1946 high was 36. FEDERATED-DEFT.STORES-(57) Has been one of the better acting stocks in the group. Its recent high of 59 1/4 is considerably above the 1946 high of 35 3/8. The nearer term indication is 67 and the longer term ob- jective is 82. MARSHALL FIELD (34 3/4) is quite a distance below its 1946 high of 57 7/8. It has held in the 20-38 area since late 1946. An upside penetra- tion (if it occurs) would indicate 57 followed by a longer term 72. MAY DEFARTMENT STORES (36) This stock slightly bettered its 1946 high of 35 at the recent high of 37 3/4. hbility to break out of the 28-35 area was constructive. The longer term objective is 63. Nearer term in- dication is not clear. EDMUND VI.TABELL WALSTON & CO.