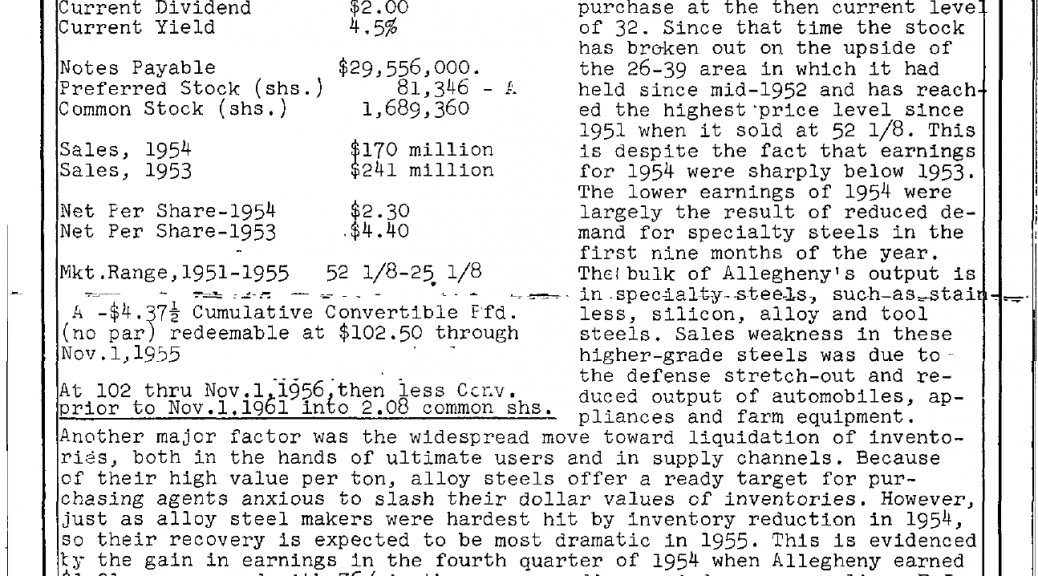 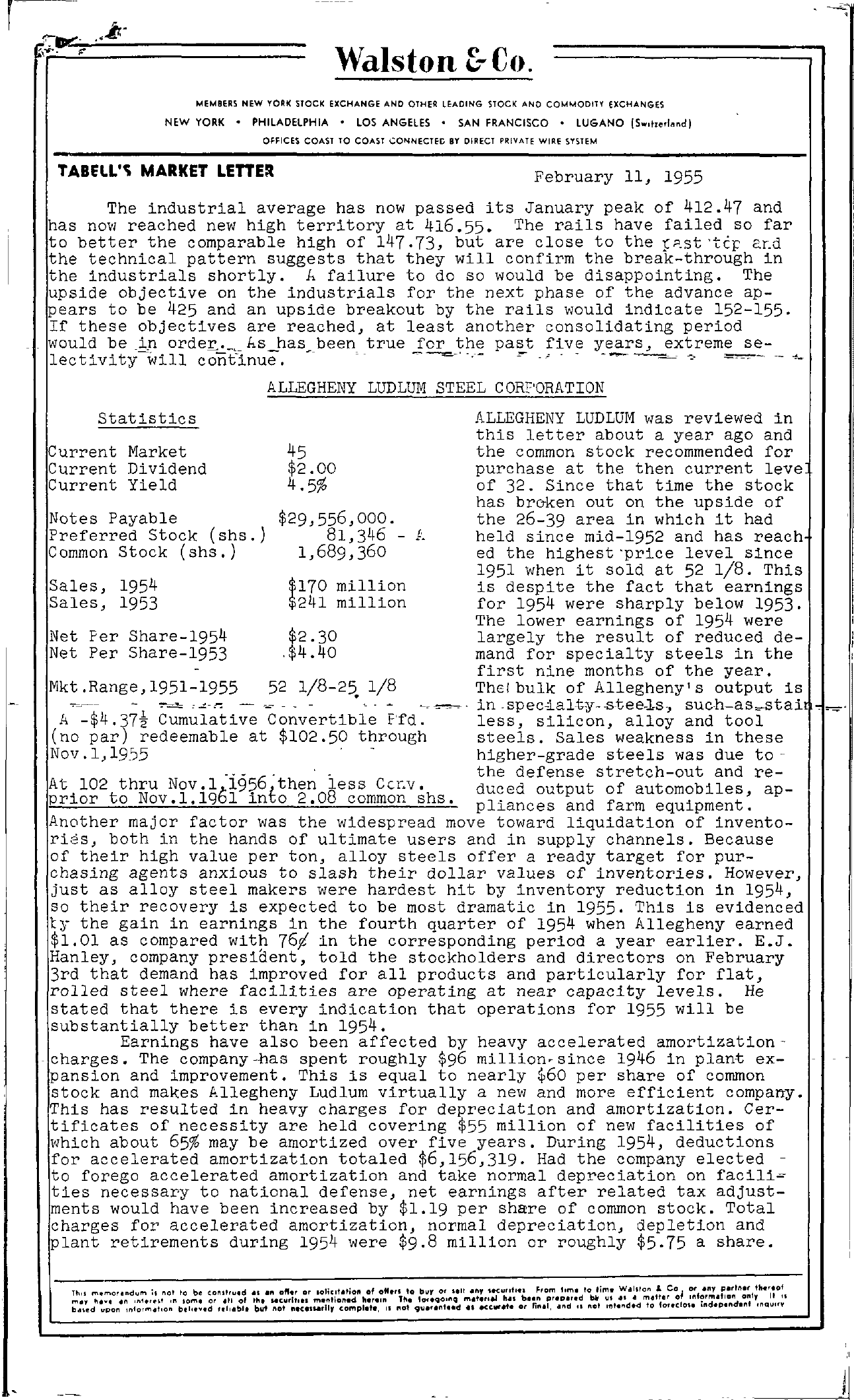 Walston E,- Co. 'EMBERS NEW VORK STOCK EXCHANGE ANO OTHER LEADING STOCK ANO CQMMQDtly eXCHANGES NEW YORK PHILADELPHIA LOS ANGELES SAN FRANCISCO LUGANO (S.,I,Id) OffiCES COAST TO COAST CONNECTEr. BY DIRECT PRIVATE WIRE SYSTEM MARKET LEnn February 11, 1955 The industrial average has now passed its January peak of 412.47 and has now reached new high territory at 416.55. The rails have failed so far to better the comparable high of 147.73, but are close to the the technical pattern suggests that they will confirm the break-through in the industrials shortly. h failure to do so would be disappointing. The upside objective on the industrials for the next phase of the advance ap- pears to be 425 and an upside breakout by the rails would indicate 152-155. If these objectives are reached, at least another consolidating period wleocutlidVity-wiolrldecro.n..t,'lhnsueh. as been true for the past five – y-e–a-r-s,-.e0xt-remes-e- -,- ALLEGHENY LUDLUM STEEL CORPORATION Statistics ALLEGHENY LUDLUM was reviewed in this letter about a year ago and Current Market 45 the common stock recommended for Current Dividend 2.00 purchase at the then current leve Current Yield 4.5 of 32. Since that time the stock has out on the upside of Notes Payable 29,556,000. the 26-39 area in which it had Preferred Stock (shs.) 81,346 – 1. held since mid-1952 and has reach Common Stock (shs.) 1,689,360 ed the highest 'price level since 1951 when it sold at 52 1/8. This Sales, 1954 170 million is despite the fact that earnings Sales, 1953 241 million for 1954 were sharply below 1953. The lower earnings of 1954 were Net Fer Share-1954 2.30 largely the result of reduced de- Net Per Share-1953 ,4.40 mand for speCialty steels in the first nine months of the year. Mkt.Range,195l-1955 52 1/8-25 1/8 Thelbulk of Allegheny's output is — – – in A Cumulative Convertible F'fd. less, silicon, alloy and tool (no par) redeemable at 102.50 through steels. Sales weakness in these Nov.l,1955 – higher-grade steels was due to- At 102 thru Nov.l less prior to Nov.l.19bl into 2.08 common shs. the defense stretch-out and reduced output of automobiles, appliances and farm equipment. Another major factor was the widespread move toward liquidation of invento- ries, both in the hands of ultimate users and in supply channels. Because of their high value per ton, alloy steels offer a ready target for pur- chasing agents anxious to slash their dollar values of inventories. However, just as alloy steel makers were hardest hit by inventory reduction in 1954, so their recovery is expected to be most dramatic in 1955. This is evidenced ty 1. the 01 gain in ea as compared rnings with 76in1 the fourth quarter of 1954 when Allegheny earned in the corresponding period a year earlier. E.J. Hanley, company presiaent, told the stockholders and directors on February 3rd that demand has improved for all products and particularly for flat, rolled steel where facilities are operating at near capacity levels. He stated that there is every indication that operations for 1955 will be substantially better than in 1954. Earnings have also been affected by heavy accelerated amortization- charges. The company spent roughly 96 million,since 1946 in plan-t ex- pansion and improvement. This is equal to nearly t60 per share of common stock and makes Allegheny Ludlum virtually a new and more efficient company. This has resulted in heavy charges for depreciation and amortization. Cer- tificates of necessity are held covering 55 million of new facilities of which about 65 may be amortized over five years. During 1954, deductions for accelerated amortization totaled 6,156,319. Had the company elected – to forego accelerated amortization and take normal depreciation on facili ties necessary to national defense, net earnings after related tax adjust- ments would have been increased by 1.19 per share of common stock. Total charges for accelerated amortization, normal depreciation, depletion and plant retirements during 1954 were 9.8 million or roughly 5.75 a share. , II